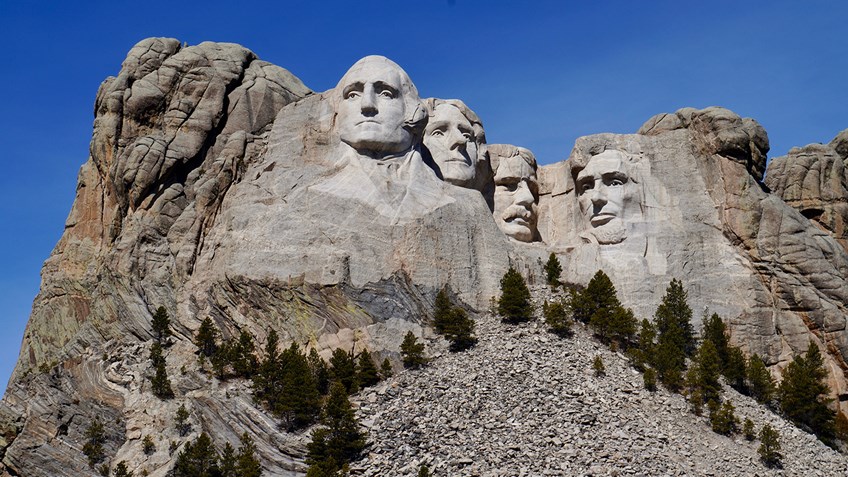 Liberty University student Riley Hayes and his friend John traveled the U.S. on a 10-day spring break, stopping at historic and significant sites along the way in support of the Second Amendment and the movement toward National Concealed Carry Reciprocity. Read the whole story on NRA Blog!

After pulling into Keystone, S.D., later than expected, we hit the hay and slept soundly. We got up in the morning excited to see Mount Rushmore and plugged the address into the GPS. Driving up the road to the landmark—which is clearly designed for high volumes of traffic—you pull into a row of toll booths to pay (I believe it was $10 per vehicle and they asked how many were with us, so maybe there is an extra cost for more of a crowd). We discovered that Mount Rushmore is an interesting area if you are carrying; you are A-okay in most of the outdoor areas and even in some buildings according to signs, but other buildings prohibit carry. Be careful about which buildings you go into at the site, and make sure to check for the dreaded sticker on doors. 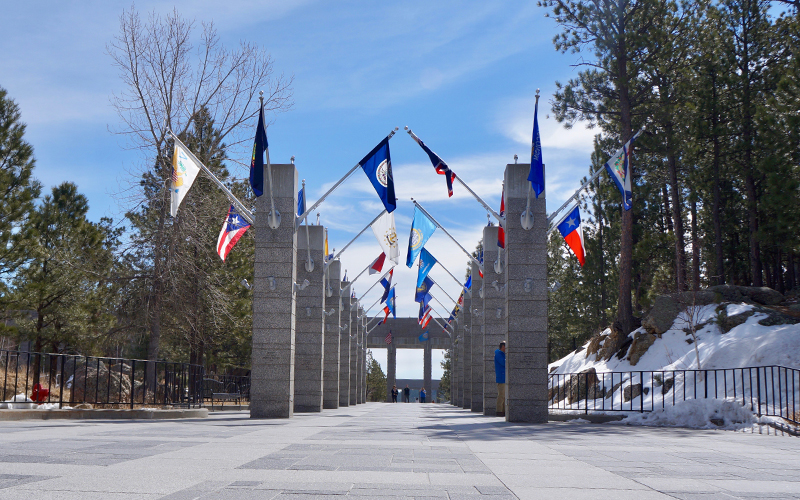 The Mount Rushmore facility is beautiful, and the view platform is found at the end of a hall of state flags on pillars. I was once told that I would be disappointed by the size of Mount Rushmore, but, to the contrary, I was blown away by the skill that it must have taken to carve such detail during the 14-year project from 1927 to 1941. Seeing some of our nation’s greatest leaders immortalized so majestically in granite was a sight I’ll never forget. 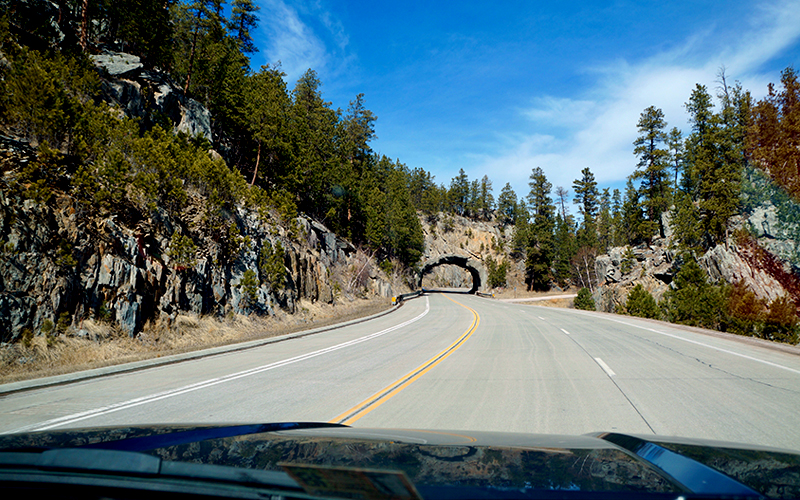 After leaving Keystone, we made our way to Iowa, and an uneventful drive brought us to our stop in Newton by 10 p.m. Fun fact: Newton, Iowa, is where the Maytag Washing Machine Company was founded in 1893! We made camp, got the camp stove ready for the morning and hit the hay.

Leaving Newton, we made the 20-minute drive to Grinnell to visit the Brownells retail store—by far the best gun store I have ever been to. The selection was great, the staff was friendly and the free coffee was very needed! The staff really made the experience memorable. Tony, one of the employees, even hooked both of us up with Brownells ball caps! “We can’t have you come all that way and leave empty handed,” he said. The entire Brownells operation is classy, and a must see if you’re within any reasonable distance. 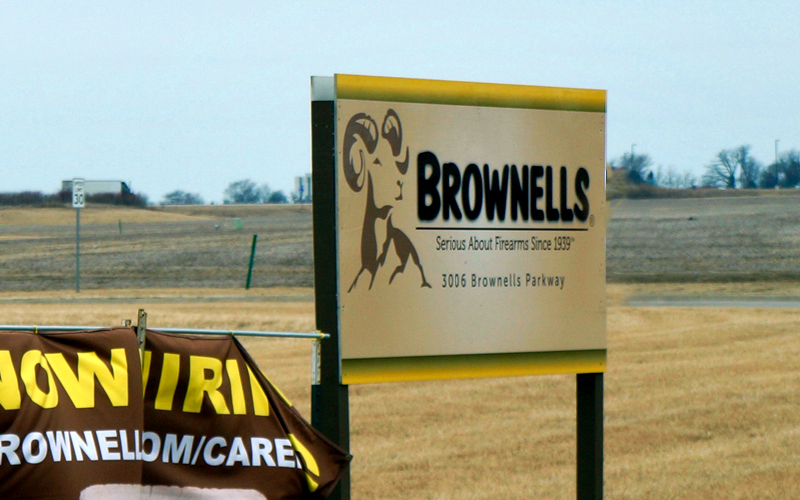 We continued by driving about six and a half hours south to Springfield, Mo., home to the original Bass Pro Shops Outdoor World location.  The Springfield Bass Pro is basically a sportsman’s Disney World, and inside you’ll also find the NRA National Sporting Arms Museum. The museum was fantastic and a definite must see if you’re heading through Missouri! 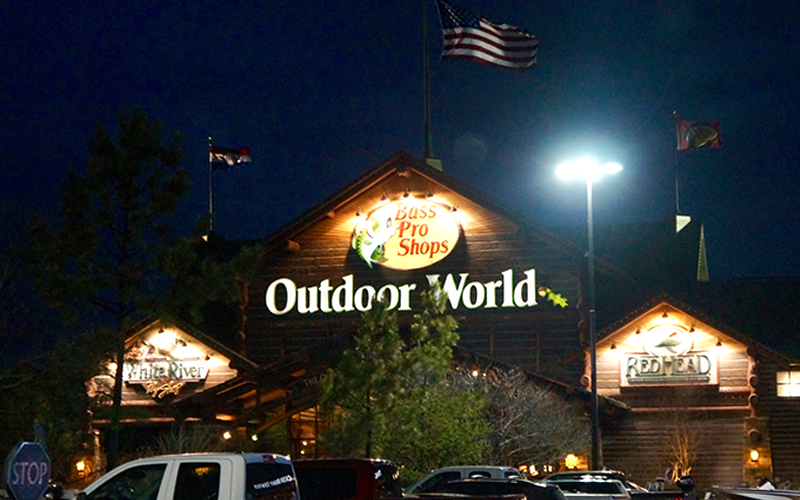 After the museum, we headed east to the Gateway Arch in St. Louis. We arrived at about midnight and took some photos of the arch, which was much bigger than I expected. Apparently they let people go to the top of it! After the arch, we had to lock up our firearms before making the dash across southern Illinois to reach our stop in Indiana. We got to Indiana in good shape, set up the tent and went right to sleep.

We woke up in Indiana and headed to Louisville, Ky. The goal was the Louisville Slugger Factory, but when we got there the parking lot was packed, it was pouring rain, and there was a “no guns” sign on the door. Sadly, we decided to get some photos and keep going to Bud’s Gun Shop in Lexington, Ky. I would encourage anybody who loves baseball to write to the Louisville Slugger Museum and encourage them to change their firearms policy. There is no statistic to support the claim that a “no guns” sign makes people safer. In fact, according to the Crime Prevention Research Center, 98 percent of the mass shootings since 1950 have occurred in places with policies preventing the carry of firearms by law-abiding folks. 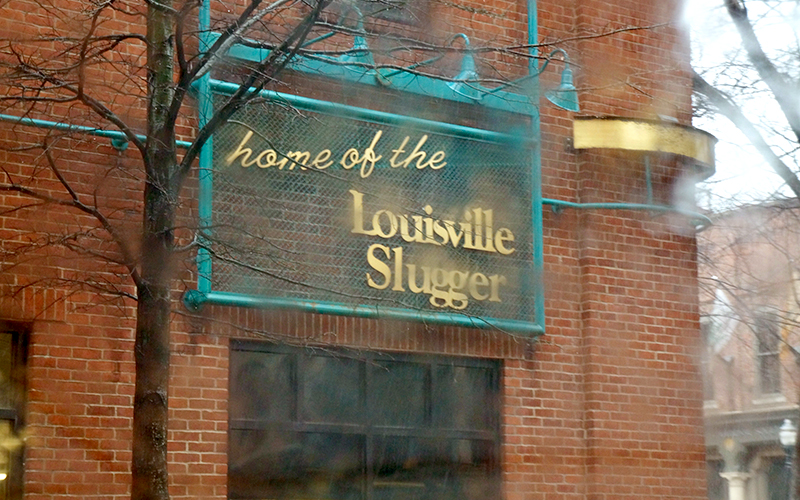 Fortunately we had a friendlier destination ahead of us. Bud’s Gun Shop was pretty cool! It had an indoor range on site, and we saw some beautiful Springfield M1A rifles. After Bud’s, we continued east, driving through rain, freezing rain and snow and passing at least 15 car wrecks. Most of the wrecks didn’t look serious, and I would guess about 10 of them involved smaller sedans. The weather improved for a bit as we neared the West Virginia line later in the day, but it soon went back to freezing rain. 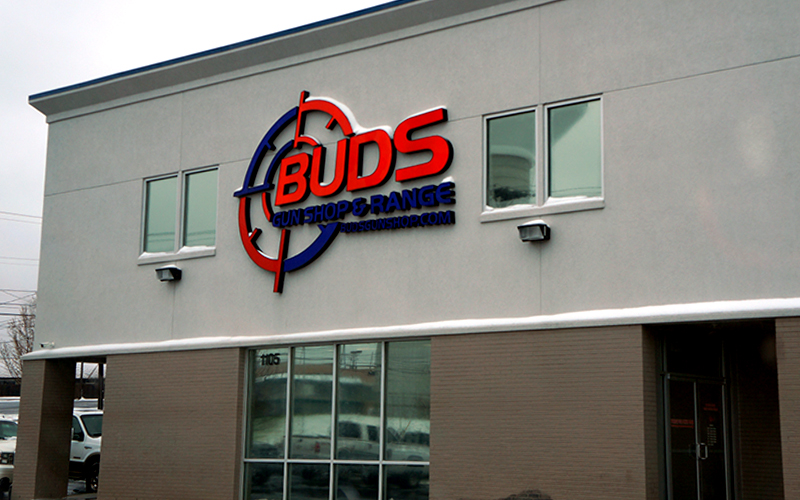 We were heading to Appalachian Bible College in Mount Hope, W.V., to see John’s brother Joel, but we faced a long delay in getting there. Sadly, it resulted from a fatal car wreck on the route. We got word of the wreck over the CB as truckers heading north warned about a bad wreck and standstill traffic on the I-77 Turnpike southbound. We got off the highway and, over the next three hours, made the trip along route 61 to get to Mount Hope. When we arrived, Joel walked us around campus while we all caught up.

After weighing our options, we decided to push on and finish the last three and a half hours of the drive back to Lynchburg. We got in around 2:30 a.m. after a long but rewarding spring break! I would absolutely do this again, though next time I would take a longer amount of time for the trip. I never felt rushed at all, but there were a lot of cool places that I would like to revisit and spend some time in.

Overall, this trip has shown me how true it is that we patriots are not the minority. In fact, it’s high time we go on the offensive for our rights! With so many folks in the mainstream media bent on vilifying the Second Amendment, we patriots must take a more active voice in opposing any and all new infringements on our rights. Second Amendment-loving patriots should be marching to end unconstitutional prior restraints on a God-given right. It’s time to push back against every disgusting ploy to limit our liberties and freedoms.

This is our republic, and while those on the left are louder and more emotional, they lack any facts or statistics to support their claims. Let’s all stand together in unity and tell those in Washington, and those in every state capitol, that we will not sit idly by and watch our rights trampled. We must band together and denounce these attacks on our freedom—even when those attacks come from the highest office in the land. The last time I checked, the power still rests with “We The People”; it’s only on loan to the folks in Washington. And come next election we can once again demonstrate the power behind the “gun vote.”