A Brief History of Firearms: Repeaters and Breechloaders 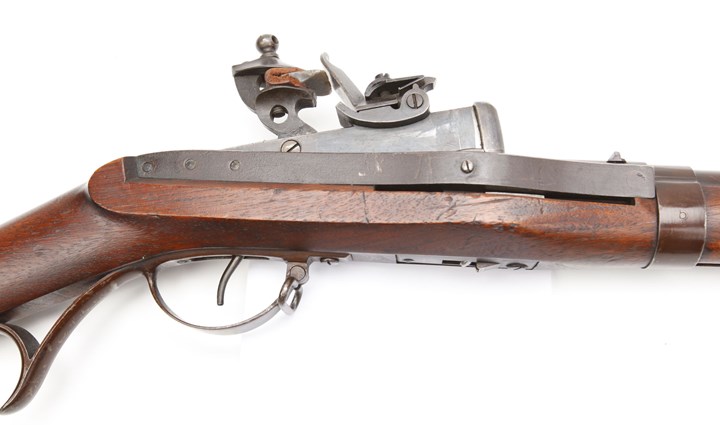 The Hall Model 1819 Breechloading Rifle marks two important firsts in firearms history. This model was the first breechloading rifle to be adopted by the United States as a regulation military arm... 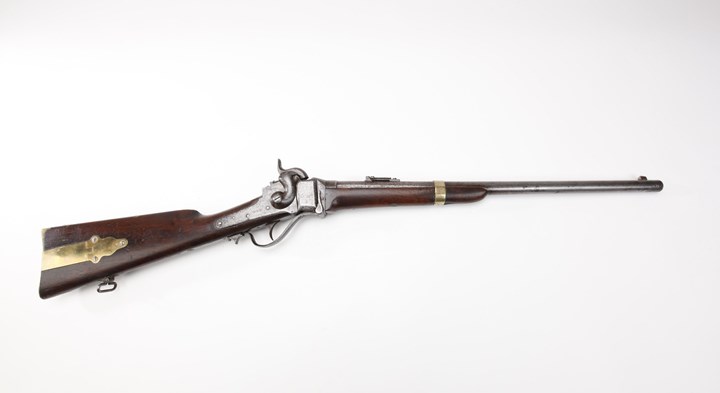 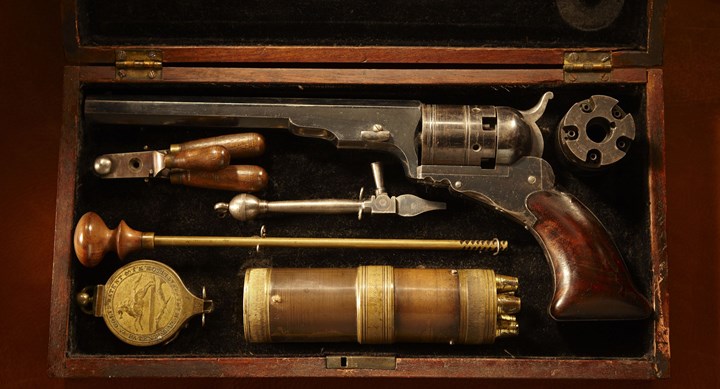 SHOW CAPTION HIDE CAPTION
This early cased five-shot Colt handgun bears serial number 3 and was a presentation firearm specially engraved as a gift to a foreign dignitary. The Paterson Revolver No. 5 was also known as the "Texas Paterson," and are popularly associated with Jack Hays of the Texas Rangers. About 1,000 were manufactured between 1838 and 1840... 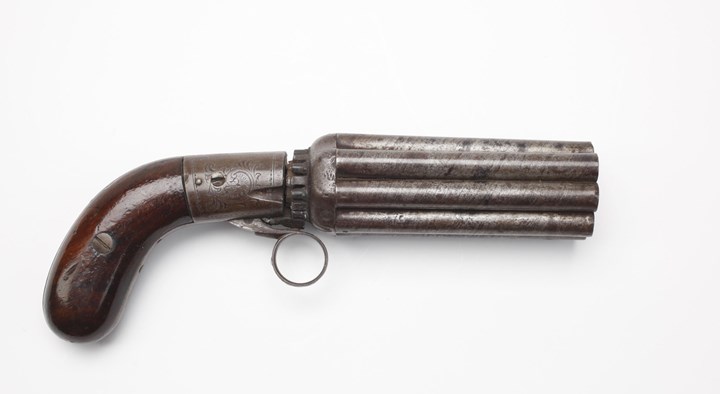 The introduction of the percussion system marks the beginning of a dramatically rapid era of firearms advancements, coinciding with the Industrial Revolution and including the era of the American Civil War, through the turn of the century. During this relatively brief time, guns would go from primitive flintlocks to the basic systems that still dominate firearms designs today.

Development of effective breechloading systems was one of these concepts. From the matchlock through the early percussion era, the vast majority of guns had been "muzzle-loaders." That is, the powder & projectile had to be dropped down the muzzle at the front of the barrel, and rammed to the rear before firing. This made reloading awkward, especially if trying to shoot a long gun from a prone position or behind cover or concealment, and, as noted earlier, became more difficult after a few shots when barrel fouling made the job more strenuous. This led to many attempts to develop a gun that loaded from the rear of the barrel, although most early efforts were not effective due to weakness of materials and the leakage of hot gases from the breech seal when the gun was fired.

In the early 19th Century, various breechloading designs finally reached production in quantity. A notable example is the U.S. military Hall North system, which in 1833 marked both the first U.S. percussion arm, and the Army's first breechloader. In 1841, the breechloading Dreyse needle gun,which packed the projectile and powder together in a combustible cartridge, was adopted in Germany as the first military bolt action gun.

The Civil War saw the adoption of a wide variety of breechloading systems, including those made by Sharps, Maynard, Burnside, and many others.

An even more pressing concern was the relatively long time it took to reload a firearm, and the need for rapid follow-up shots. An archer could loose several arrows in the time it took a "musketeer" to reload after he had fired his weapon.

In even the earliest days of firearms design, this could be addressed in a limited manner by mounting multiple barrels (and usually multiple locks) onto the same stock. This basic concept is still in use today, in the double barrel shotguns produced by some of the finest gun makers in the world, including firms such as Browning, Franchi, Beretta, Remington, Ruger, and Charles Daly, and is a system preferred by many discriminating hunters and competitive shooters.

However, with more than two barrels, the system begins to become heavy and cumbersome. Other systems were tried, including manually rotated groups of barrels mounted to a single lock, multiple superposed charges within a single barrel, and cylindrical or rectangular clusters of chambers which could be manually repositioned to align with a firing mechanism and barrel.

The most successful solution was invented by Samuel Colt. He developed a handgun design with a rotating cylinder with multiple chambers, each of which could contain a charge of powder topped by the bullet, loaded from the front of the cylinder. The rear of the cylinder was closed, with a nipple for a percussion cap installed at the back of each chamber. When the hammer is cocked, a fresh chamber rotates into alignment with the rear of the barrel, and when the trigger is pulled the hammer drops, firing the load in that chamber. This is the basis of the mechanical system still used in all revolvers today.

Colt's first manufacturing venture was based in Paterson, N.J., and produced percussion revolvers with folding triggers and revolving shotguns and rifles. These are called Colt Paterson models by modern collectors. Relatively few were produced, and the firm folded, having been in business only from 1837 to 1841.

The idea was too good to die, and in 1847 Colt was back with a new, heavier, more powerful revolver, this time with a traditional bow type triggerguard. Prompted by an initial order from Captain Samuel Walker to equip his troops in the Mexican war, the new model tipped the scales at nearly five pounds, and remained the most powerful repeating handgun until the introduction of the .357 magnum nearly 90 years later. It was called the Walker Model, after the young captain. Colt's revolvers were initially manufactured by Eli Whitney, but Colt soon had his own plant in Hartford, Conn.

Colt had patented his revolving cylinder design, and so held a monopoly on revolver manufacture for a number of years. The only serious competition for a repeating handgun was the pepperboxdesign, in which a cluster of barrels, each with a percussion nipple on the rear, rotated around an axis by the pull of a ring trigger which also cocked the hammer and released it to fire the chamber which had rotated into position. Pepperboxes were made by a number of European and American firms, the foremost probably being the succession of companies founded by Ethan Allen, including Allen & Thurber and Allen & Wheelock.

The Colt pattern cap & ball revolver rapidly came to dominate the repeating firearms market however, with Colt offering revolving shotguns and rifles as well as handguns. Among his most successful designs were the little 1849 Pocket Model in .31 caliber, the mid-sized 1851 Navy Model in .36 caliber, and the 1860 Army Model, offering .44 caliber chambering in a much smaller and handier package than his earlier Walker and Dragoon models. After the expiration of Colt's patent in the mid-1850's, other firms jumped into the revolver business, with major manufacturers including Remington, Starr, Whitney, and Manhattan. From these and other makers, the percussion revolver was the major sidearm of the Civil War.