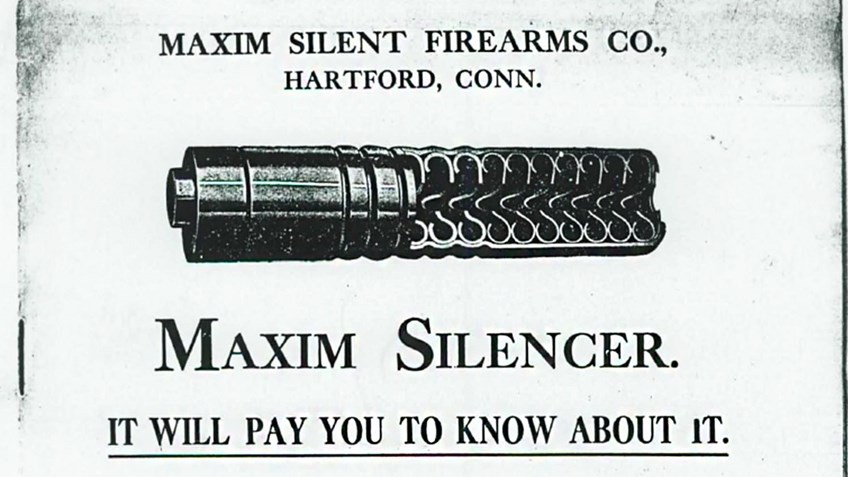 More
SUBSCRIBE
Sound suppressors are an accessory that is quickly gaining popularity in the firearms industry and with consumers. What exactly is a suppressor? How does it work? How can I get one? Are they legal? This series addresses all those questions and more as we explore the evolution of suppressors.


The History of Suppressors

In 1902, the first successful, commercially available suppressor was invented by Hiram Percy Maxim. Maxim was an American inventor, graduate of the Massachusetts Institute of Technology, and son of Sir Hiram Stevens Maxim - inventor of the first portable, fully automatic machine gun: the Maxim Gun. 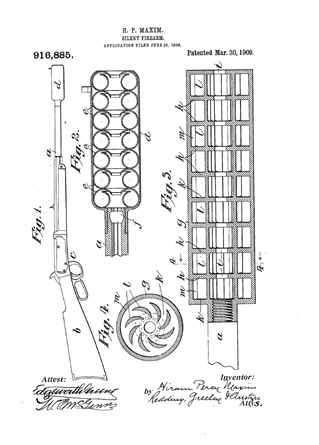 Click on each image to see the full Maxim Silencer Brochure and Patent from ForgottenWeapons.com

The Maxim Silencer, patented in 1909, was a tubular device attached to the barrel of a firearm which reduces noise and muzzle flash when fired. It was regularly advertised in sporting goods catalogs where it was available for mail order. The Maxim Silencer was marketed to all sportsmen and intended to enhance the shooting experience by reducing the risk of hearing damage and noise pollution.

At the same time, silencers and mufflers for internal combustion engines were being created using the same noise reduction techniques. Maxim took advantage of this and founded his own company, Maxim Silencers, Inc. in 1912. While the Maxim Silencer began Maxim’s success, his company still remains, over 100 years later, as a leader in exhaust, heat recovery, and emissions control silencers.

To suit the needs of multiple riflemen, the Maxim Silencer was available in every rifle caliber from the .22 to the .45, except for large caliber Winchester and Remington models which were furnished with custom attachment devices. Maxim designed “silencers” for auto-loading rifles as well as any single shot rifles, repeating rifles, carbines, and single shot target pistols of any make or caliber.

While Maxim referred to his product as a “silencer”, the term is not exactly true in a literal sense. A “silencer” cannot completely silence a firearm, but can reduce the noise of a gunshot to hearing safe levels where additional hearing protection is not required to prevent permanent damage to a shooter’s hearing - in some cases up to 40dB. This vastly helps hunters in the field, beginners to communicate with an instructor, and ranges that may be close to neighbors or in suburban or urban areas. You will see the more scientific-sounding term “sound suppressor” or “suppressor” is used interchangeably with the term “silencer” in the industry. Suppressors can also reduce muzzle flash and/or felt recoil. Using a system of baffles, sound suppressors work by allowing the gas from a fired cartridge to remain in the tube, cool down, and expand before exiting.

Theodore Roosevelt was a fan of the Maxim Silencer and had one mounted on his Winchester 1894 carbine. His son Archie once related that “Father favored the silencer for early morning hunting expeditions to eliminate varmints around Sagamore Hill. He felt it best not to wake the neighbors.” Probably for the best, as Roosevelt’s neighbors included such New York luminaries as the Vanderbilt, Whitney, and Tiffany families.


In 1934, the National Firearms Act (NFA) was implemented as a means to restrict and regulate certain firearms and devices. This included a heavy $200 tax on suppressors, essentially halting development for 40 years. The $200 tax still remains today. However, $200 in 1934 had the same buying power as $3,583.71 today. While suppressors were still legal, the tax discouraged people from purchasing them, driving demand down. It wasn’t until H&K developed the MP5SD 9mm in the 1960s that improvements and new designs began hitting the market again. In the last five years in particular, the commercial market in the US has exploded as innovations in material science, CNC machining, and rapid prototyping have increased the reliability and durability of silencers so that they last a lifetime or more -- just like the firearms they are designed to suppress.

Today, suppressors are still administered and regulated in the U.S by the Bureau of Alcohol, Tobacco, Firearms and Explosives (ATF), which oversees the application process, criminal background checks, and taxes. Their own publications show growth from 2010 to 2015 of 285,087 registered silencers in private hands to 902,085, which is a 317% increase. States also have laws governing private ownership of silencers; at this time, silencers are legal for private ownership in 42 states and legal for hunting in 40.

Since 1902, suppressors have been popular among firearm enthusiasts. Maxim’s incredible invention was intended to reduce risk of hearing loss, and over time shooters have found other benefits like recoil reduction, faster follow up shots, and overall signature reduction have aided their shooting and hunting experiences. Though state restrictions, paperwork, and a federal tax have kept some shooters from making their firearms quieter, suppressors have never been more popular than right now.
IN THIS ARTICLE
Suppressors History Maxim
More
SUBSCRIBE