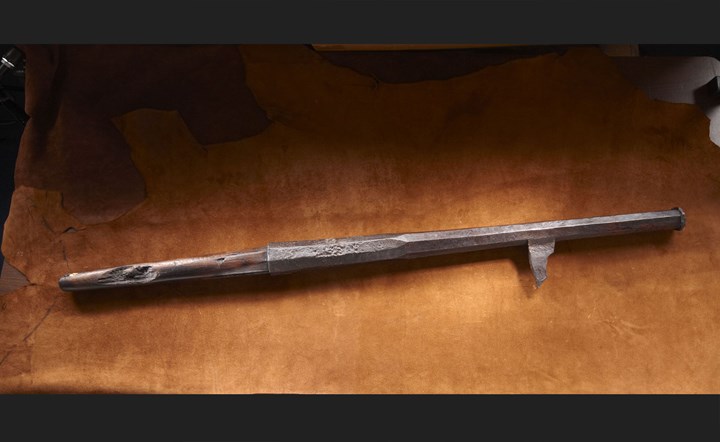 This circa-1350 hand-forged arm was once part of the Archduke Eugen collection at Salzburg Castle. Hand cannons are the earliest known hand-held firearms. The gun tube was attached to a pole and held by the user, while he or an assistant applied a slow match to the touch hole to ignite the black powder propellant charge. Lacking standard ammunition, hand cannons were typically loaded with stones, nails, or other suitable projectiles... 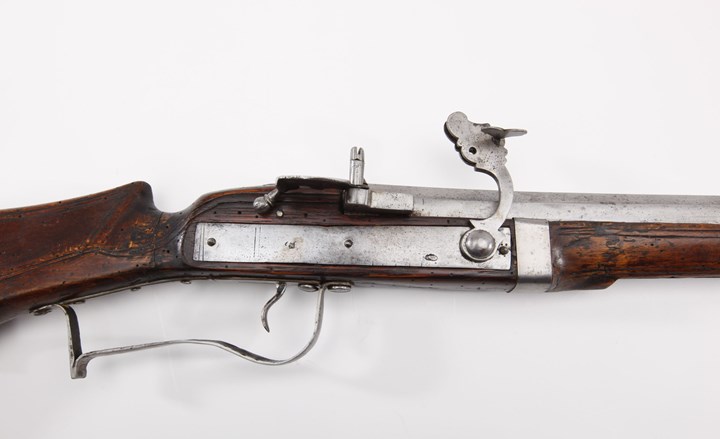 SHOW CAPTION HIDE CAPTION
Early 16th Century Spanish Martial Match-Lock Musket (single-shot/ muzzle-loading/ black powder/ ball ammunition) With a smooth-bore barrel, this early musket originated in Spain. It is ignited by smoldering cord held in a match-lock's serpentine arm. Match-locks were inexpensive to fabricate, easy to repair, and quick to load. They do, however, extinguish in the rain, can be seen at night, and are inaccurate... 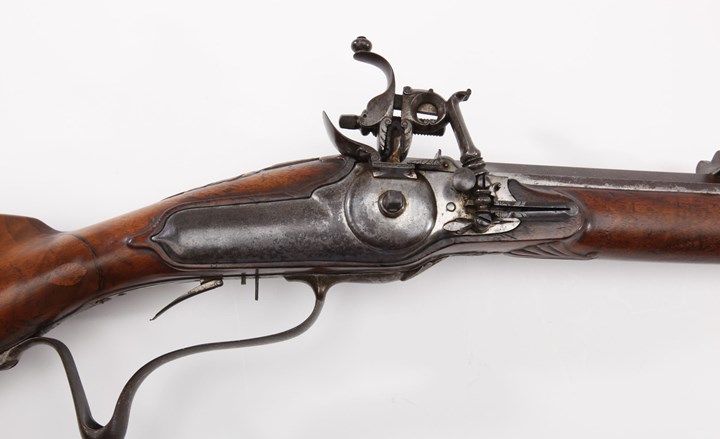 SHOW CAPTION HIDE CAPTION
Mid-16th Century French Martial Wheel-lock rifle (single-shot/ muzzle-loading/ black powder/ ball ammunition) Produced in France, the circa-1560 display gun employs a wheel-lock ignition system and a rifled barrel. Working like the serrated wheel of a cigarette lighter, these rifles were expensive to manufacture. They are difficult to repair and slow to load, but can be fired in wet weather and are accurate because of their rifled barrels...

Read more here
More
SUBSCRIBE
Prior to taking on oversight of the NRA Museums, Jim Supica was an antique gun dealer, peddling old iron through his mail order catalog, website and auction business. He holds Juris Doctorate and Bachelor degrees from the University of Kansas. His interest in and knowledge of firearms history led him to author/co-author six books on firearms, and contribute to TV, radio, print and webcasts.

In this series, A Brief History of Firearms,  Jim dives into several topics including early firearms, advancements in technology, historical impacts, and modern day firearms. In this first segment, Jim discusses the earliest firearms along with workings of early ignition systems...

As long as man has used tools, weapons have been among those of foremost importance. They have been used to provide food and protection since the formation of the earliest social units.

For centuries, and continuing through today, men and women have used firearms as the most effective weapons individuals can wield. Guns have been used to implement both the highest and basest goals of humanity - to put food on the table, to provide personal protection, to enforce or defy the law, to defend or acquire territory and treasure, and to liberate or to enslave.

Guns have also come to be used for a wide variety of recreational and competitive shooting, and millions of Americans exercise their constitutional right to own firearms simply for the pleasure of shooting or the enjoyment of ownership, in addition to more serious uses.

The origin of gunpowder is unknown, and may have occurred in China, Turkey, or Europe. The first record describing the combination of charcoal, sulphur, and saltpeter, to produce a rapidly burning or exploding powder is a coded writing by Franciscan monk Roger Bacon shortly before 1250 A.D.

Within 50 years, early cannon had been developed. A large thick metal tube with one closed end (the breech) and an open end (the muzzle) was loaded first with gunpowder and then with a projectile. The powder was ignited with a torch or smoldering ember through a small hole in the rear (the touchhole). The rapidly expanding gases from the exploding gunpowder would throw the projectile from the barrel. This basic principle still applies today.

It took another half-century for this concept to be applied to individual hand-held weapons. The first firearms, ca. 1350, called "hand cannons" or "hand gonnes," were essentially miniature cannons designed to be held by hand or attached to a pole for use by individual soldiers. They were loaded and fired in the same manner as the full-size cannons.

For the next four centuries, the greatest advances in the evolution of firearms would focus primarily on the search for more reliable methods of igniting the gunpowder, in addition to design advances for more rapid repeat shots and better accuracy.

The term "lock, stock and barrel" comes from firearms design, representing the three major components of early guns. The barrel is self explanatory, and the stock is of course the wooden holder in which the barrel is mounted allowing the gun to be fired from the shoulder or from one hand. The lock is the mechanical contrivance that is used to ignite the charge of gunpowder in the chamber of the barrel.

The first gun to combine all three components was the matchlock, in the early 1400's. Many early hand cannons were ignited with a "slow match" - a length of slender rope or cord that had been chemically treated so that an end could be ignited and would continue to burn or smolder, much like a 4th of July punk used to shoot fireworks. Obviously it was awkward to hold both gun & slow match while trying to dip the match to the touch hole of the hand cannon.

The matchlock solved this problem by using an arm called a serpentine on the gun to hold the slow match. By mechanical linkage, a trigger on mounted on the bottom of the lock could be pressed to lower the match to the touch hole, which now included a small pan of fine gun powder that would be ignited first, transmitting the fire through the hole to fire the main charge in the barrel.

This simple system was followed by a much more complicated one, the wheellock in the early 1500's. It was the first to take advantage of the fact that sparks could be produced by striking flint or other substances against steel. The lock contained a wheel with a serrated edge, attached to a spring which could be wound with a separate key called a spanner, much like early clocks, and held under tension. A hammer like piece called the dogshead held a piece of pyrite rock. To fire a wheellock, the dogshead was lowered onto the edge of the wheel, which was released by a pull of the trigger causing a shower of sparks to fall into the pan igniting the charge. The principle is much the same as a cigarette lighter.

This was an improvement in reliability over the matchlock, primarily because the shooter did not have to constantly attend to the smoldering slow match to insure that it remained lit. It also avoided the problem of an enemy seeing or game smelling the smoke of the match before the gun was fired. However, it took highly skilled craftsmen to build the clock-like mechanism of the wheellock, making it an extremely expensive piece, primarily available to royalty and the like for hunting. Although wheellocks saw some military use, the matchlock remained the most common military firearm during the wheellock era.