Presidential Firearms at the NRA Museums 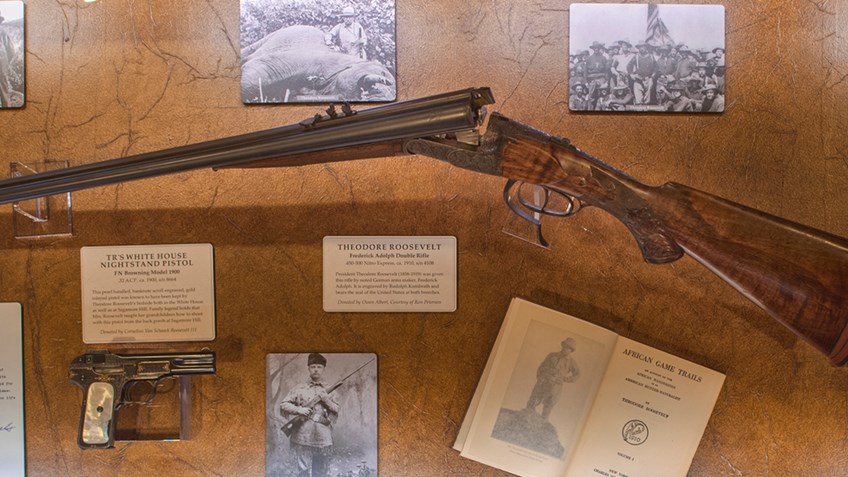 More
SUBSCRIBE
For Phil and me, getting to see and handle John F. Kennedy’s M1 Garand rifle at Rock Island Auction was a special treat. Seeing the iconic American rifle of WWII that belonged to a remarkable American President made it that much more special to share with our NRA Gun Gurus audience. 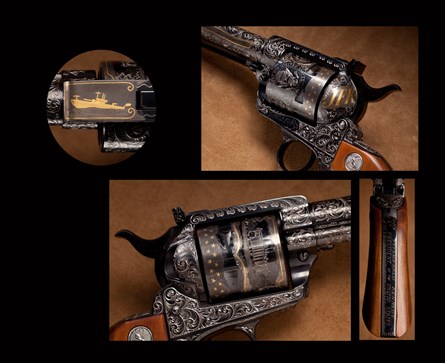 NRA Gun Gurus allows Phil and me to share historical and unique firearms throughout history. Many of these can be found at the NRA Museums – including those that have been owned by other American presidents.

A classic Colt six-shooter engraved for President Kennedy is prominently featured in the Petersen Gallery at the NRA National Firearms Museum at NRA Headquarters in Fairfax, VA. This Single Action Army revolver has the presidential seal on the cylinders and “JFK” on the recoil shield. The serial number is “PT 109” – the number of Kennedy’s patrol boat during his navy service in WWII.

Guests at the NRA National Sporting Arms Museum at Bass Pro Shops in Springfield, MO will find a “jewel case” in the middle of "Timeline of American Sporting Arms”, which holds side-by-side shotguns that were used by two different Presidents. Dwight D. Eisenhower’s Winchester Model 21 has five gold stars inlaid on the bottom of the frame, representing his military rank. The two-barrel set is cased in a personalized mutton leg case. It was one of Ike’s favorite hunting shotguns and has the inscription, “To a straight shooter, from a friend.”

Alongside the same exhibit is the biggest shotgun ever made by Colt and given to one of America’s biggest presidents. Although Colt is better known for their handguns and AR pattern rifles, in the late 19th and early 20th centuries they offered quality double barrel shotguns in a choice of 12 ga. or 10 ga. They also made one, and only one, massive 8 ga. shotgun. This was presented to President Grover Cleveland, a substantial man who tipped the scales at 280 pounds while in the White House. He was also the only president to serve two consecutive terms, first elected in 1885, and making a comeback in 1893.

Appropriately, the most represented president at the NRA Museums is America’s most gun-savvy president – Theodore Roosevelt. In addition to being one of the most popular presidents in history, he was an enthusiastic hunter, conservationist, shooter, and Life Member of the National Rifle Association. He was a prolific author, and the only person awarded both the Nobel Peace Prize and the Medal of Honor. 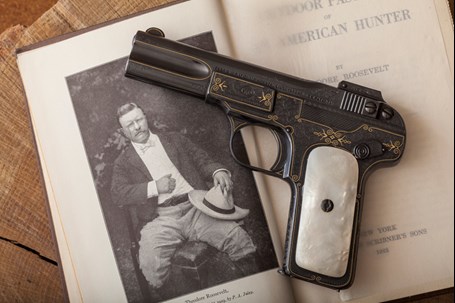 The guns of Roosevelt, his friends and family hold place of pride in the Roosevelt Conservation Gallery at the NRA Sporting Arms Museum in Springfield, MO. This includes a Winchester Model 95 owned by his son, Gen. Theodore Roosevelt, Jr. (also a Medal of Honor recipient), along with Smith & Wesson revolvers owned by his close political allies, Gen. Leonard Wood and Sen. Henry Cabot Lodge. The central display case holds Roosevelt’s Adolf double rifle (suitable for large dangerous game), S&W Safety Hammerless revolver, and the FN semi-auto pistol that he kept as his nightstand gun while in the White House.

The Museum’s Roosevelt collection is rounded out with a Winchester 1895 that traveled with Roosevelt to Cuba in 1898, when he led Roosevelt’s Rough Riders in the Spanish American War. It is now on exhibit at the NRA National Firearms Museum in Fairfax, VA.

The Museums collection does not stop there. There is plenty more to come in the near future with planned exhibits for a precision air rifle attributed to President George H. W. Bush and a pair of single shot pistols associated with President Taft. History continues to stay alive at the NRA Museums – be sure to stop by and see for yourself!

Looking for more on presidential firearms? Check out this article, The Guns of U.S. Presidents, by Philip Schreier, Senior Curator of NRA Museums.