Roy Rogers: King of the Cowboys 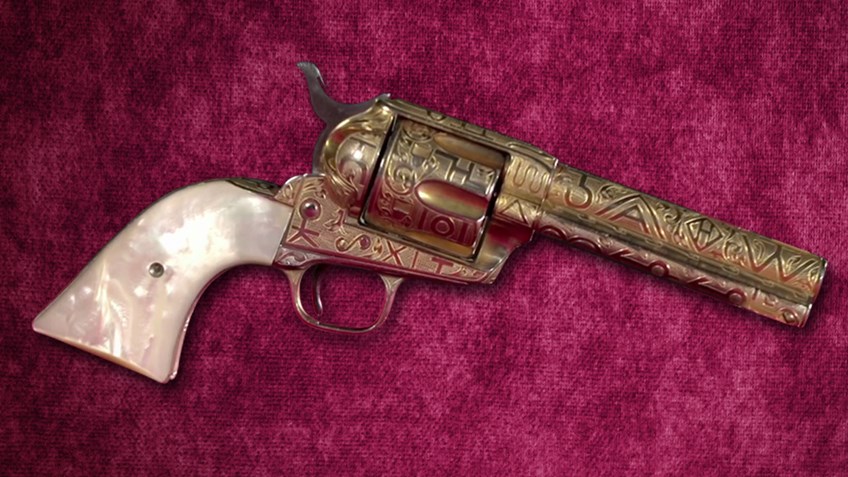 “Our audience is going to be kind of split here, there’s going to be a certain generation, our younger viewers and our middle-aged viewers, to whom Roy Rogers is kind of a fast food chain, but to the people of my generation, he is such a significant entertainer, licensed his name and in mid-20th century, the only person who had his name on more products is Walt Disney,” said Jim Supica, host of NRA Gun Gurus.

NRA Gun Gurus Jim Supica and Phil Schreier, make another visit to Rock Island Auction Company to discuss the unique details of a firearm that belonged to none other than legendary “King of the singing cowboys,” Roy Rogers.

This .45 single action Colt revolver is plated in gold with a mother of pearl grip with engraving that nearly covers all the exposed surfaces. This black powder revolver was manufactured in 1881 and engraved by Cole Agee and is accompanied by a Colt factory letter stating when it was shipped. The revolver is also complete with a certificate of authenticity from the Roy-Rogers-Dale Evans Museum in Branson, Missouri which states the revolver was “Roy’s Holster Gun” and personally owned and used by Roy Rogers himself.

In this week’s episode of NRA Gun Gurus presented by Henry Repeating Arms, the two hosts dive in to the history of this extraordinary piece then each take a guess at how much they think the gun will sell for before viewers witness the actual bidding.

This week’s auction combines history and auction excitement you don’t want to miss. Tune-in tonight for the action-packed episode to see which Guru comes out on top and how much this piece of Hollywood history went for!