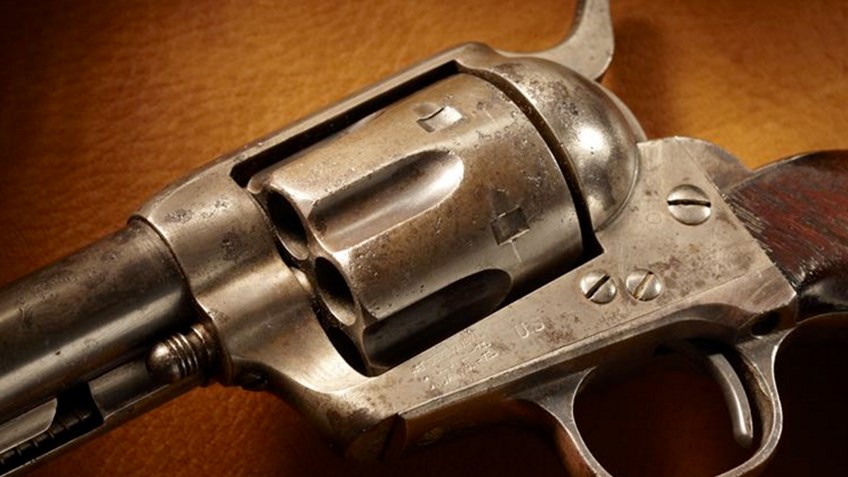 Some American military units had a short existence, but the 1st U.S. Volunteer Cavalry (Roosevelt’s Rough Riders) assembled after a service of just 133 days. The regiment consisted of men well accustomed to hard work in the outdoors – Western men that had worked as wranglers, horse-breakers, prospectors, but some also had been polo players. The bottom line was that they had to be good riders and good shots.

With the start of the Spanish-American War, the initial call went out for recruits. For the prospective Rough Riders, there wasn’t much waiting around. In the first day after notice was posted, 2,300 men attempted to sign up. Theodore Roosevelt himself noted that approximately 50% of the recruits were received from New Mexico, but there were men represented in the regiment from 45 states. One man who joined up from Texas, was a quiet individual named Louis B. Bishop. 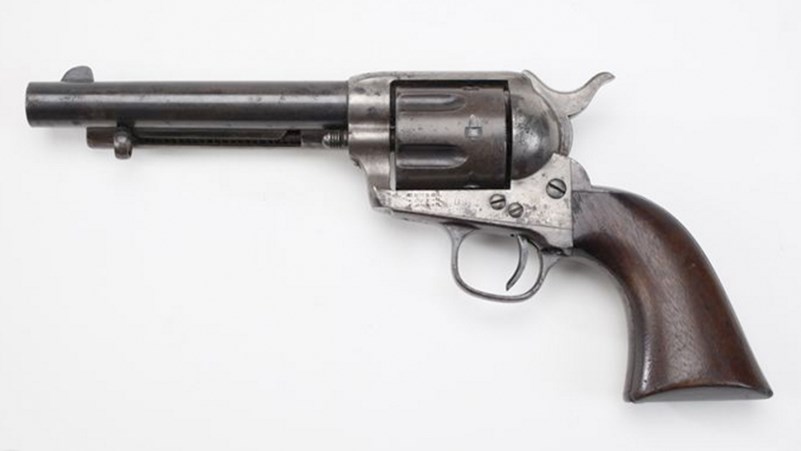 Louis B. Bishop mustered in as a trooper in the 1st United States Volunteer Cavalry in San Antonio, Texas, a location he acknowledged as his hometown. The 22-year-old Bishop attested that he knew how to ride a horse as well as how to shoot and he signed his name at Menger’s Bar in San Antonio – a location that still stands today. With the ranks filling quickly, he was assigned to Troop G, a unit that would be commanded by Captain William Llewellen. But overseeing Llewellen and other officers was a doughty Lt. Colonel that had until recently been in government service as the assistant Secretary of the Navy, Theodore Roosevelt. Using his influence, Roosevelt was able to get his men outfitted with somewhat better arms than the regulars.

For shoulder arms, the Rough Riders received the smokeless powder .30-40 Krag-Jorgensen carbine instead of the .45-70 blackpowder Trapdoor Springfield rifle. The Krag offered a five-shot magazine that could be quickly topped up in battle, but the single-shot Trapdoor was slower to load and belched forth a cloud of smoke with every shot.

For a handgun, both regular and volunteer troops received the same model of revolver, the Colt Single Action Army .45. The troopers of the Rough Riders, being volunteer cavalry, were to each receive their Colts. But in the regular infantry, only sergeants and officers were issued handguns. Some of these Colts were well-worn, veterans of many campaigns in the Indian Wars, but others were a bit newer. 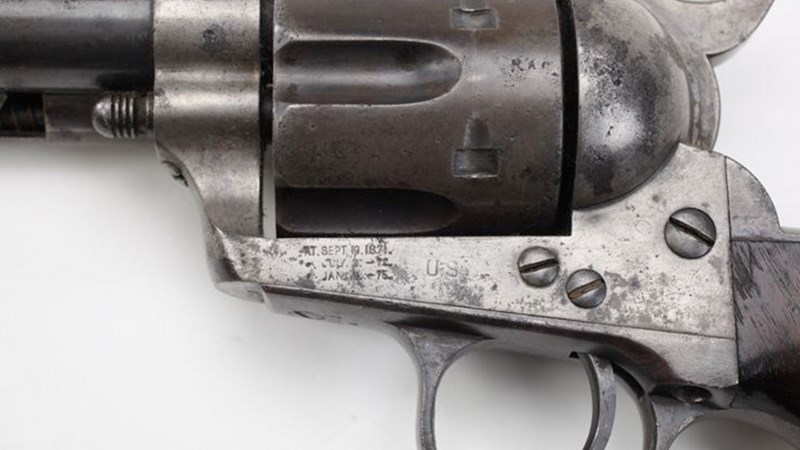 Trooper Louis Bishop’s Colt had been manufactured at the Colt factory in 1885, but just six years later was called into Springfield Armory for refitting. Parts deemed unsuitable were replaced and then the refinished parts were recombined. The barrels were changed to a shorter 5.5 inch length. During this process, no real care was taken to ensure the parts matched by serial number and so Trooper Bishop’s Colt .45 was a mixed numbers gun.

But that didn’t matter to Bishop in the least, he was armed and ready to proceed with military matters.

There were 47 officers and 994 enlisted men that emerged from training and headed to Florida, prepared to board their transport to Cuba. The twelve companies of Rough Riders were split up heading onto the railroad pier, with Roosevelt and eight companies near the head of the loading procession there in Tampa on May 29, 1898. Things were disorganized and Roosevelt took full advantage, boarding his first group of troops, understanding it would be harder to force them off the vessel. The confusing situation became worse. While the first Rough Riders were permitted to remain on board, their horses and mules did not board, and neither did the trailing four companies. The urgency of the day resulted in Roosevelt’s Rough Riders being shipped off to Cuba, sans mounts and some equipment. But one of the lucky troopers who made it on board the vessel was Louis B. Bishop, along with his counterparts in Troop G. The men had little beyond their arms and uniforms with them.

The Rough Riders were ill-prepared to fall in for infantry assignments in Cuba, but without their mounts, there wasn’t much else they could do. Pressed into an attack on the Spanish outpost of Las Guasimas, the troopers soldiered on, only able to carry a small portion of material beyond basic levels of ammunition and food. Succeeding at Las Guasimas, there was only a brief pause before the Rough Riders moved on towards Santiago. On the outskirts were two heights and the cavalry, now-infantry that the Rough Riders represented was ordered to provide a diversion while the main American force attacked a Spanish stronghold. But somewhere in this equation, someone had forgotten to factor in Theodore Roosevelt. 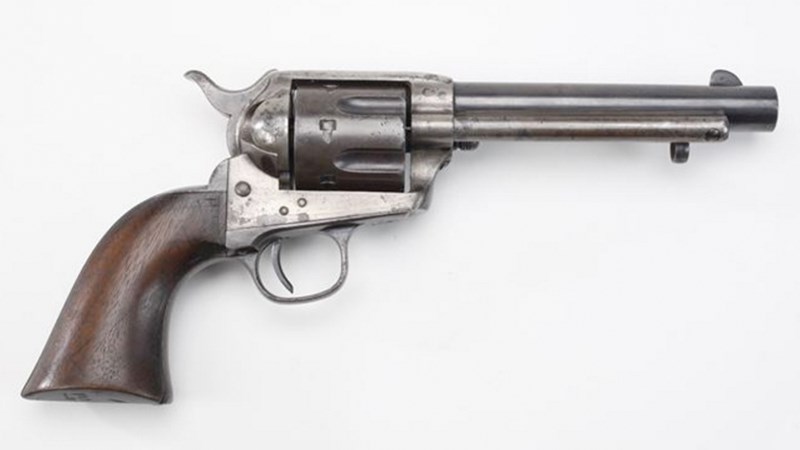 Roosevelt rallied his forces, and supported by Gatling fire and some other troops that Roosevelt impressed into following his lead, moved uphill in short “charges” towards San Juan Heights, taking Kettle Hill despite fierce Spanish resistance. The Rough Riders faced enemy forces also armed with smokeless rifles capable of rapid firing, but with Gatling support fire, the 1st US Volunteer Cavalry, with only Roosevelt briefly mounted on his horse, Texas, taking the summit and tightening the American encirclement about the city of Santiago de Cuba. Somewhere in the fog of battle here was Trooper Bishop, armed with carbine and revolver, moving towards the summit with his fellows. The victory of the Rough Riders made it possible for the campaign to be quickly concluded.

On August 14th, the returning Rough Riders came off the boat at Montauk, New York to be met by many of their counterparts that hadn’t made the Cuba connection. The next month was filled with celebration, honoring the men and their commander.

On September 15th, the regiment formally disbanded, turning back into the government the arms and supplies they had received. Louis B. Bishop’s revolver left his possession, returning to a government arsenal. But thanks to records kept in the National Archives, we can definitively track this revolver to a brief period in history in Cuba, where Bishop and Roosevelt were together in military service.

Bishop passed away on June 27, 1957 and is interred in Rockport, Indiana. His commanding officer Theodore Roosevelt was to receive the Medal of Honor 80 years after his own death.

Louis Bishop’s Colt is represented at the National Firearms Museum in Fairfax, Virginia, not far from a Colt M1895 “potato-digger” that also served on San Juan Heights.

To learn more about Theodore Roosevelt and the Rough Riders, watch this episode from NRA Gun Gurus on NRATV!