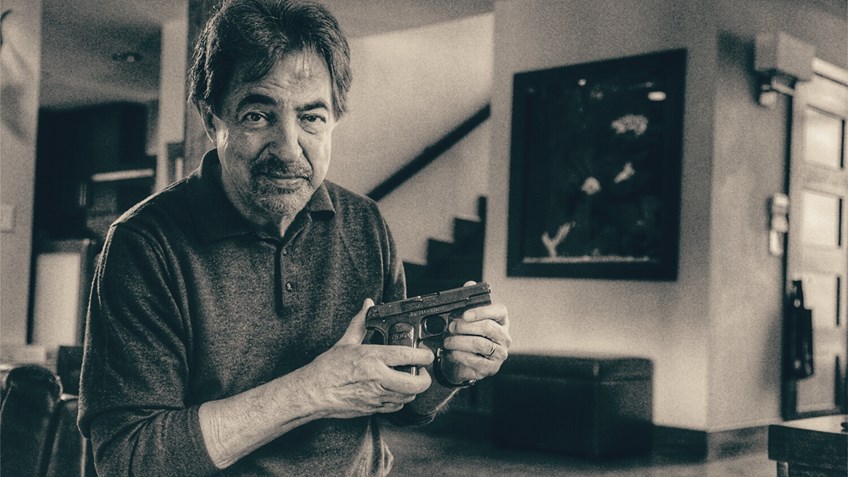 Last season, NRA All Access sat down with Joe Mantegna and learned about why he values the right to bear arms and what life in Hollywood is like for a pro-gunner. (If you missed that Episode you can view it here!) To follow up on that, we thought it would be fitting to hear from the legend, Joe Mantegna, about how Hollywood was the reason he learned firearm safety...


The very first time I ever used a gun in my life occurred in 1976 during a firearms course where I had to learn how to handle a handgun so as to be authentic in a role I would be doing in a play.  It’s somehow fitting that my introduction to the shooting sports would start while doing research for the career I would have for the next 40 plus years and still counting.  I wound up owing a lot to show business in terms of expanding my interest in the shooting sports.

The most important aspect of it was that right from the beginning I was introduced to it by skilled professionals who first and foremost stressed the importance of safety and sensibility whenever dealing with firearms.  Since I work in a profession where the proliferation of all types of firearms are an intricate part of films and television programs, the importance of the armourer’s duties is paramount.

Over my last nine years on Criminal Minds I’m happy to say that our show continues that tradition of taking seriously the responsibility of how firearms are used and portrayed on our program.  There is a safety protocol on our show that demands that the on-set armourer constantly explains and demonstrates to all parties involved in a scene that involves firearms that every firearm used is rendered safe.  With the same care and safety one would expect at a gun range, our on-set attitude is that we must assume all guns are loaded even if it’s an unloaded prop, and the same care and handling of the prop weapons should be no different then if they were fully loaded functional firearms.

To insure a degree of personal involvement for our characters we have input on the firearms we use, and I personally made the choice to carry an old-school type 1911 .45 as my characters carry piece.  For the past nine seasons I have carried variations of 1911 type pistols, which have included one from Springfield Armory, two beautiful custom pieces made especially for me from Cabot Arms, and one other custom piece from Sig Sauer.  Since we are portraying a real organization, being the Behavioral Analysis Unit of the F.B.I., I feel it’s very important to take the choice and use of our firearms on the show very seriously as we are representing the actual men and women of this fine organization to a massive world wide audience who very likely will only have this program as the reference to who and what the F.B.I. are, and what they do.

I’m proud to represent them every week, and I will always do my best to portray my firearms use in the program as honestly and professionally as I can.  In addition to this, for the past five years I have hosted the show Gun Stories for the Outdoor Channel which has afforded me the opportunity to demonstrate and discuss the history and use of a myriad of firearms stretching throughout world history.  From the .22 derringer to the .50 caliber Ma Deuce, I’ve shot them all, which understandably makes me the envy of shooting enthusiasts everywhere.  I’ve enjoyed my 40-year involvement in the shooting sports, and will always be an avid supporter of the importance of the safe and sane education to those who express an interest in becoming part of the shooting fraternity.

Learn more about Joe Mantegna's story on an episode of NRA All Access now on NRATV!