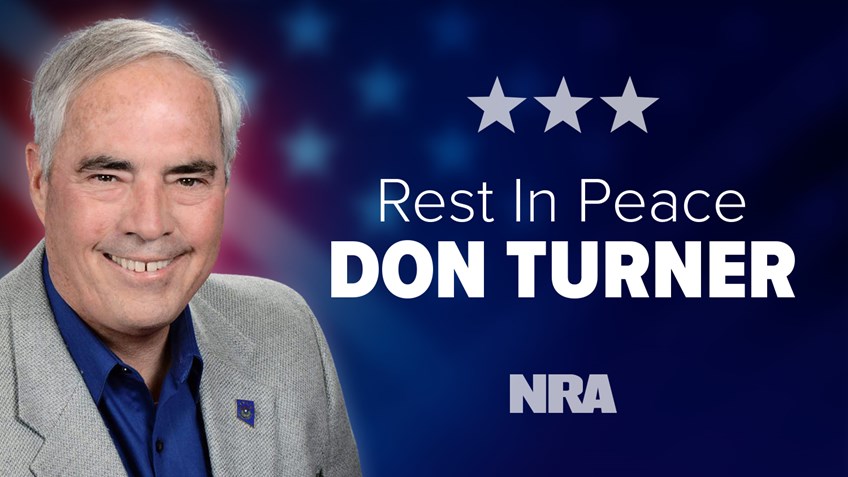 "I was saddened to hear of Don’s passing," said NRA Executive Vice President Wayne LaPierre. "He was a tireless advocate for our Second Amendment and for America’s shooting sports. His many contributions to our cause in Nevada and beyond have benefitted many. On behalf of the National Rifle Association, I extend my heartfelt condolences to his wife, Betty and their family."

After graduating from the University of Arizona, Turner worked briefly in Utah before securing a position with Arizona Game and Fish. Starting as a Wildlife Manager, he eventually rose through the ranks to become Project Leader of Statewide Shooting Ranges and ultimately manager of the world renown Ben Avery Shooting Facility. His nine-year stewardship of Ben Avery saw participation number increase by nearly 350%. Such success soon garnered the attention of officials in the neighboring state of Nevada.

Through those organizations Turner’s drive and determination became what some referred to as the heart and soul of the Nevada firearms community. He worked with key players in the Nevada legislature, helped pass a number of pro-gun bills, and was instrumental in creating the Nevada Firearms Coalition Foundation’s Annie Oakley Women’s Shooting Program, which helped thousands of women to develop their shooting skills through education and training.

Current Nevada Firearms Coalition President Matt Hennager said, "Don Turner was a great man who selflessly devoted himself to the preservation of American's 2nd Amendment rights. He worked tirelessly on the development of the Clark County Shooting Complex in Las Vegas, founded the Nevada Firearms Coalition, and was instrumental in the passage of the pro Second Amendment laws in Nevada. Don was a friend, mentor, and inspirational figure who will be sorely by me, his family, and the 2A community at large."

Don Turner was a biologist, an instructor, a peace officer, a former NRA & NSSF Board member, husband, father, and grandfather. He is survived by his wife of 27 years, Betty Woods Turner, three children, Christina Kim (Chuck), Daniel Turner, Ted Turner, and step-daughter Catrina Zenou (Israel), as well as granddaughters Lily and Stella Kim.