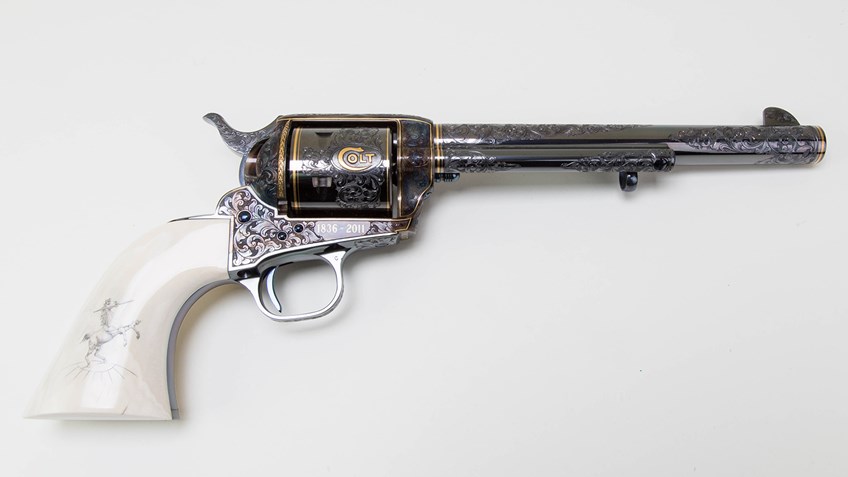 More
SUBSCRIBE
Colt's Manufacturing Company has been producing firearms for a very long time. Five years ago, on the 175th anniversary of Samuel Colt's venture into the firearms industry, the company wanted to commemorate the occasion with something truly special.

Creating a gun this important is no easy task, but it's a little easier when you can call on the world renowned Colt Custom Shop and master engravers Steve Kamyk and George Spring.

The gun that came out of the shop is a true work of art. Based on the iconic Colt Single Action Army revolver, its 7.5 inch barrel, cylinder, trigger guard, and backstop are finished in carbonia blue and the balance of small parts are fire blued. Fine scrollwork with C+ coverage is accented by full gold frame borders and raised running leaves on both sides of the recoil shield. On the left side of the recoil shield you can see a "175" in high relief gold over a raised relief scroll. 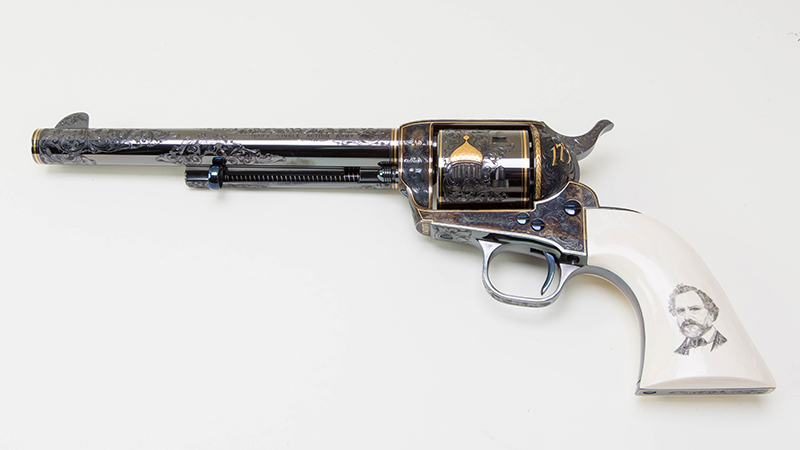 The non-fluted cylinder is highlighted by a gold and silver Colt dome with the serpentine Colt in gold on the opposite side. Hand inlaid gold bands accent the barrel and cylinder and the backstop has been engraved and gold inlaid with Sam Colt's signature. Finally, the elephant ivory grips are scrimshawed with a portrait of Sam Colt on the left side and the Rampant Colt on the right side.

Instead of filing the piece away or auctioning it off once it was complete, Colt wanted the gun to be where people could see it. And if you want to show off a gun, there's no better place than the NRA National Firearms Museum. The museum received the prized revolver in 2011 on loan for just one year, but they let Colt know they were happy to have it on display for as long as the manufacturer wanted. After the year was up and Colt heard about how popular the gun was with the museum's attendees, the company let the museum make it a permanent part of their collection and you can still admire the gun's incredible craftsmanship today.

Who knows, maybe you'll get to see it alongside the 200th anniversary model in 2036...
IN THIS ARTICLE
NRA Museums
More
SUBSCRIBE