Lessons From the Gun Range - With Love From A Beginner 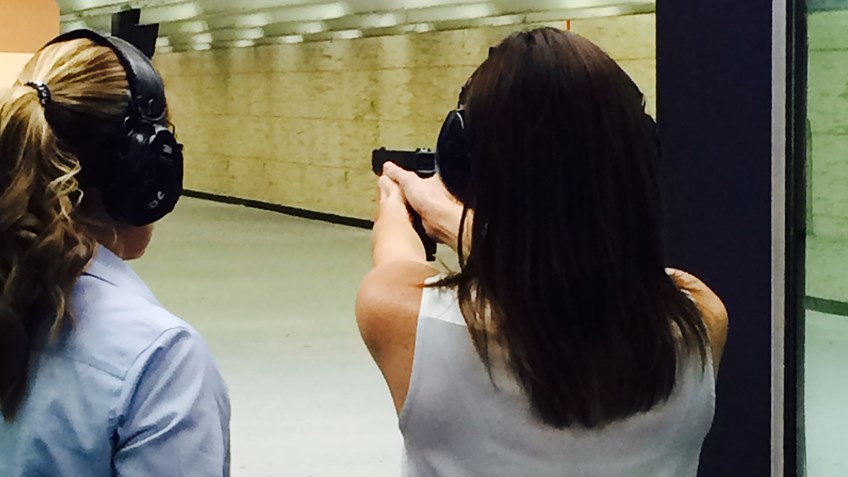 I have a confession to make.

I took a job at the NRA with little to no knowledge or experience about guns.

Had I shot a gun before? Sure. Does a Nerf gun count?

It’s safe to say that I had no idea what I was in for when I contacted the Assistant Range Manager and asked if she would be willing to give me some lessons on firearms, firearms safety, the gun range, loading a gun, shooting a gun… I could go on, but you get it, I knew absolutely nothing. Nothing!

Not only did I barely know anything, but I was also a little intimidated. Firearms were objects that intrigued me greatly and at the same time scared the pee out of me.

Now, I have a twin brother and growing up we were constantly slamming each other into walls, throwing punches, and flat out trying to destroy one another. We both survived, somehow, but I am no wimp! I know how to impose pain on someone. Nowadays Jack is much bigger than me, leaving tickling as my only form of defense. But what happens when I’m up against someone who isn’t ticklish and is seriously trying to hurt me? This question alarmed me in a way that I knew I was defenseless if I were to ever get into a bad situation. Cue an NRA Basic Pistol course.

Even after receiving an eight hour safety lesson in the classroom the night prior to hitting the range I still felt timid.  And, yes, upon entering the indoor range for the first time, I admit - I did flinch the first few times I heard other people shooting. And I did have to be reminded how to stand aggressively, how to grip the gun with confidence and how to align my sights. And yet, my entire body was rigid and tense; I could have peed at any moment.

I gripped the gun. I raised it to eye level. I aligned the three dots. I felt the gentle push from my coach reminding me to stand leaning in. I pulled the trigger.

It was a dummy round. And with that, the range portion of the lesson began. Everything I’d learned in the classroom had filtered in when I “shot” the dummy round, but without the experience of doing it for real I was still nervous and unsure.

Coach (Instructor actually - but I call her coach!) was patient with me and I quickly became more comfortable with the pistol as we repeated the process:

Ten minutes until my lesson was over, Coach handed me a box of live ammo.

I loaded the magazine with five rounds. I loaded the mag into the gun. I took my stance. I maintained my grip until I had my signs aligned. And then I pulled the trigger.

Did I hit the target? The more important question – did I pee?

Ha! I did neither. But I pulled the trigger and fired a gun – I was intimidated no more. My instructor’s energy had helped me do something I never thought I could. And even though most of my first lesson dealt with dummy rounds, I had learned the basics from an NRA Certified Instructor, a gun owner who was just as eager to teach as I was to learn. Bringing me to myfirst lesson; the first cut is the deepest – It is, but my point is a little less painful. The first shot is always the scariest. But once I took the shot it didn’t seem so bad and the next few shots after that were nothing. I began to gain confidence and an understanding of the powerful firearm that was in my hands. And I even started to like it.

And like Sheryl Crow in her song The first cut is the deepest, “Baby, I’ll try to love again…”
So until my next lesson, when I try to shoot again…

From The More You Know Girl (ba-da-da-daaaaaa!)
Lesson One: The first shot is the scariest.