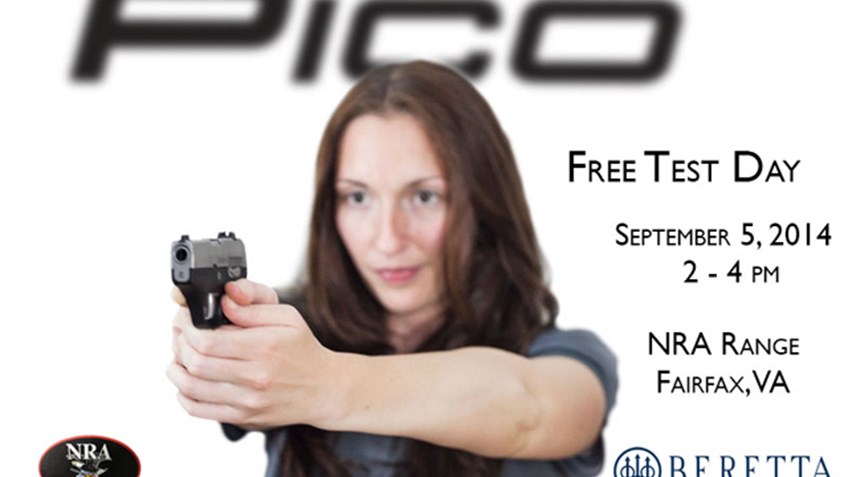 Fairfax, Virginia - So there's no such thing as a free lunch, aye? How about free range time and ammo? Well that old wives' tale is about to be proved false this Friday at the NRA Headquarters Range.

On Friday, September 5, from 2pm to 4pm, Beretta is asking all those in the Northern Virginia area to try out the .380 Pico pistol. They'll bring the ammo, you bring the aim (and your NRA Range card).

Not familiar with the Pico? Here's a quick look from Guns & Ammo magazine:

... Beretta’s new Pico is a very small concealed carry semi-auto initially chambered for the .380 ACP, with a .32 ACP version scheduled to follow. A caliber conversion can be accomplished by merely swapping barrels, which will be offered by Beretta as accessory items. Like many recent guns of its type, the double-action-only Pico has a polymer frame and a stainless steel slide and barrel, but it also provides several features not commonly found on other pistols of its class.

The Pico follows Beretta’s successful introduction of the slightly larger 9mm Nano in 2011 and shares many of the Nano’s design characteristics, but not all. Unlike most small DAOs, the Pico is fired by a conventional hammer instead of a striker, has restrike capability and does not have a magazine-disconnect safety. By contrast, the Nano is striker-fired with a slide-activated pre-load and does not have a restrike trigger mechanism. The Pico’s DAO system does not store any energy until the trigger is pulled, eliminating the potential of accidental discharge if the pistol is dropped.

What's the catch? Why is Beretta being so magnanimous? Because they want to know what you think.

After an afternoon of sending led (free led) down range, they want your feedback. The good, the bad and the ugly. Yes dear friends we're talking market research at its best.

Although this is a special event, regular range rules still apply. That means first time visitors will still have to pass a range test and pay all associated fees. But for those with a card of their own we're talking first come first serve.

So if you're looking to try out the latest in conceal carry options, come on down to 11250 Waples Mill Road in Fairfax, Virginia, this Friday between 2 and 4. Give the Pico a spin ... then tell us what you think about our free lunch.