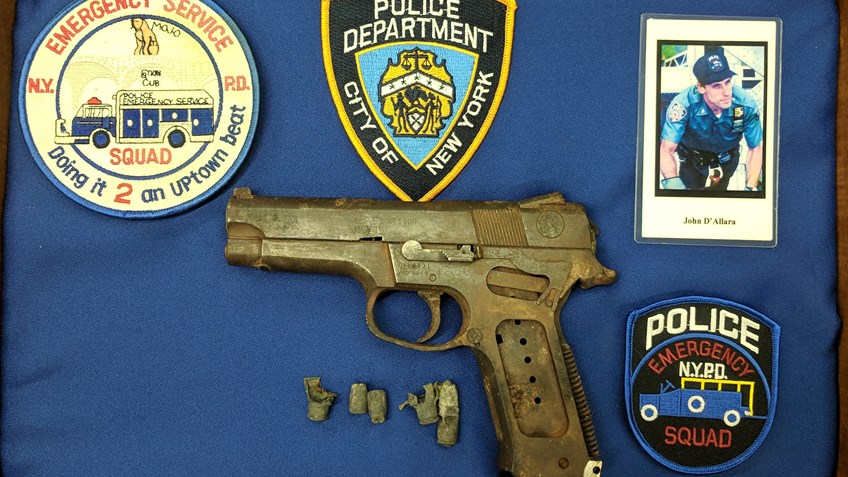 On Tuesday, September 11, 2001, Americans watched as two aircraft under the control of terrorists crashed into the twin towers of the World Trade Center in New York City.

Law enforcement, fire, and EMS agencies were there immediately, helping survivors out of the impact zones and trying to rescue many others still trapped in the collapsing structures.

Since 2003, the NRA National Firearms Museum in Fairfax, VA, has had the backup gun from NYPD Officer Walter Weaver on display in the "Long Arm of the Law" exhibit. At 30 years old, Weaver had been with the NYPD for 9 years. He was assigned to the Emergency Services Unit, Squad 3, and was last seen on the 6th floor of the North Tower while attempting to free people who had been trapped in an elevator.

During the rescue and recovery efforts, Weaver’s backup gun – a Smith & Wesson Model 640 double-action revolver – was found in the wreckage. Bent and disfigured, the .38 Special rounds cooked off. The gun’s serial number is what enabled the NYPD to link the gun to Weaver. His remains were never found.

In May 2018, NYC resident Daniel D’Allara just so happened to be in the area and decided to stop in the museum. He knew from talking to Weaver's brother that the backup gun worn by "Wally" - as he called him - was on display. After seeing the gun, he shared with me the remarkable story of his twin brother, NYPD Officer John D’Allara.

John was 47 years old and had spent 19 years with the department. He was assigned to the Emergency Services Unit, Squad 2, and was friends with Officer Weaver. Sadly, Officer D'Allara also lost his life that day. His family is one of the few who actually got back remains, and they were carried from Ground Zero on April 11, 2002, covered by an American flag.

D’Allara’s duty gun – a Smith & Wesson Model 5946 semi-automatic pistol – was also found during the recovery efforts in the months that followed the attacks. The heat cooked off the Speer 9mm rounds in D’Allara’s magazine, but they reacted differently than those in Weaver’s revolver. Because they were contained, the cases exploded but remained within the body of the magazine. A testament to the carnage that day, some of the bullets and cartridges are fused together.

D'Allara's pistol and flag are both on loan to the museum and were put on display in the "Long Arm of the Law" next to Weaver's revolver. Seventeen years after the tragedy, the two officers are side by side once again.