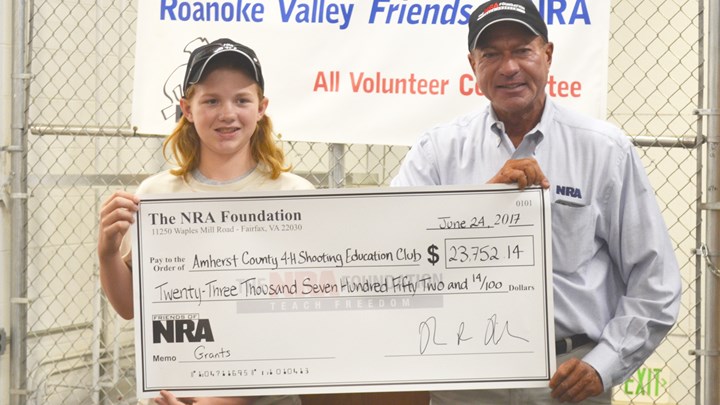 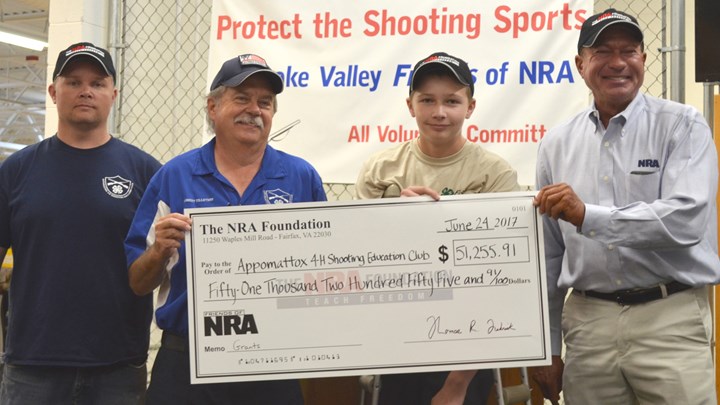 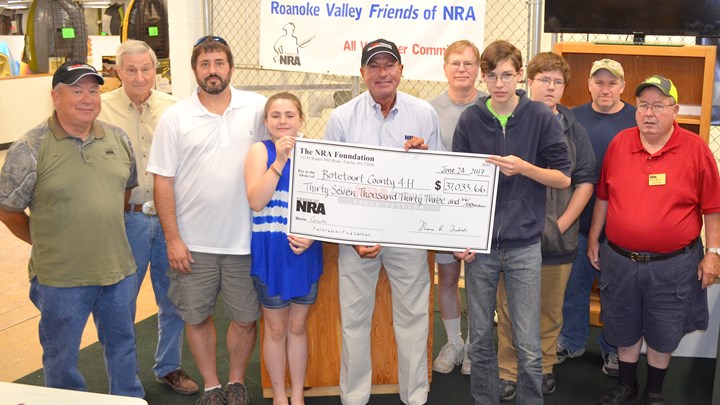 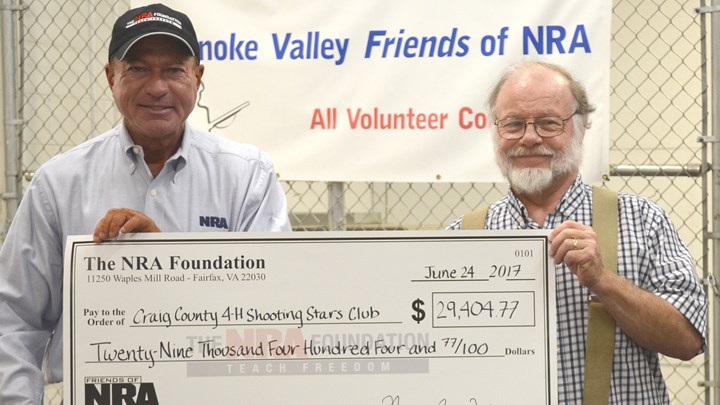 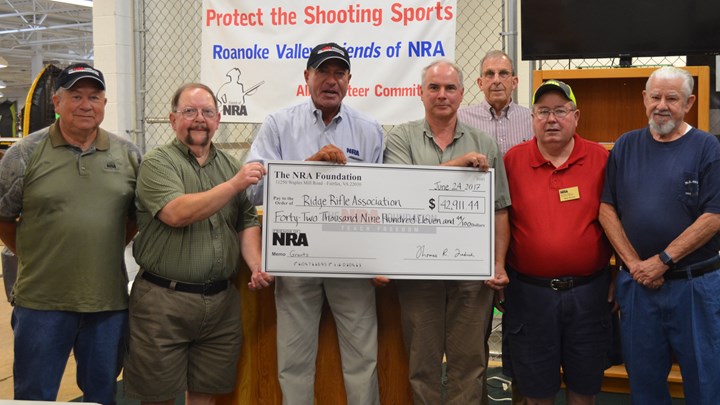 Every year, NRA Foundation grants benefit communities and individuals across the country, helping to Teach Freedom and ensure a bright future for America’s shooting sports traditions. Through 2016, The NRA Foundation has awarded more than $335 million through 42,000 individual grants in support of eligible programs and projects.

On June 24, the Sportsman’s Warehouse in Roanoke hosted an event for grant presentations from Friends of NRA to seven different organizations in the Roanoke area. Tedrick joined a crowd of Friends of NRA volunteers and grant recipients who attended to receive their symbolic checks representing nearly $335,000 in grants awarded over the past 20 years.

“These grants are generated through your local Friends of NRA events,” Tedrick reminded the recipients in attendance. “You should be very proud of the hard work that the Virginia volunteers have provided throughout the years.”

The first presentation recognized Amherst County 4-H Shooting Education Club. Since 2002 it has eight grants totaling $23,752. The BB guns, air rifles, .22 rifles, shotguns, ammunition and targets provided through the grants have helped the club ensure its focus on education, safety, training and advancing the members skills in the shooting sports and achieve its goal of investing in the children’s development as good citizens and future leaders.

Up next was the Bedford County 4-H Shooting Team, which has benefitted from nine NRA Foundation totaling $26,371 since 2003. The Bedford County team has been focusing on their shotgun skills for skeet, trap and sporting clays, and NRA Foundation grants have assisted the team with ammunition and clay targets that allow participants to get more practice. That extra practice is key to achieving the team’s goal of developing its members for competitions and representing Virginia at the National Shotgun Championship in Nebraska. Most importantly, the team helps these youths to develop the life skills of safety, teamwork and focus while having fun pursuing the shooting sports.

The Craig County 4-H Shooting Stars Club has also received nine grants, with a total of $29,405 awarded by The NRA Foundation since 2002. Funding has supported its “Youth in the Outdoors” program, which fosters an appreciation of the outdoors, teaches firearms and hunting safety and builds marksmanship skills. Grants have also provided funding for competitions and camps, for educating and training adult volunteers, and for equipment including .22 rifles, air guns, eye and hearing protection, ammunition and targets. All that supports Craig County 4-H Shooting Stars Club in helping youth mature into well-rounded and contributing adults through relationships with caring adults and through the development and practice of life skills, such as responsibility, self-discipline and focus.

The theme of 4-H continued with Botetourt County 4-H. Since 2005, it has received 11 grants totaling $37,034 for a variety of 4-H shooting education programs. From a skeet thrower and new over/under shotguns to BB guns, air rifles and .22 rifles, NRA Foundation grants have furnished the program with essential equipment. In its most recent grant, Botetourt County 4-H was awarded archery gear, 20 gauge shotguns, ammunition and various targets. Each item plays a role in providing youth not only with training in responsible firearm safety and marksmanship fundamentals but also with the opportunity to gain and improve leadership, responsibility and communication skills while having fun in the shooting sports.

The presentations continued with one to the Ridge Rifle Association. Throughout the years the association has supported many NRA programs, and NRA Foundation grants have helped it to conduct them. Since 2007 they have received 19 grants totaling $42,911. Many of those grants have been for Women On Target® and Brownells/NRA Day events, impacting nearly 900 people in the Roanoke area. Thanks to grant support, the Women On Target® event now includes AR-15 sport rifles. Ridge Rifle has also partnered with Virginia Fish and Game to teach hunter safety and with the Roanoke Police Department to teach self-defense techniques. Other grants have gone towards range improvement projects such as safety walls and upgrades to the trap range.
It is always great to see smiles from so many kids thanks to the efforts of the volunteers and The NRA Foundation
The final 4-H group to be recognized was the Appomattox 4-H Shooting Education Club. This club has been benefiting from the NRA Foundation grant program since 1995, making it one of the earliest grant recipients in Virginia. Over more than two decades, Appomattox 4-H has received 14 grants totaling $51,256 for shotguns, ammunition, air rifle equipment, BB guns, archery gear, a sporting clays trap machine, shooting accessories, safety gear and an equipment trailer—all helping to introduce more local youth to shooting and to keeping participants engaged.

These numbers speak for themselves to illustrate the incredible impact that the NRA Foundation grant program has on fostering future generations of shooting sports enthusiasts. But hearing the personal stories of success from the volunteers and youth participants of these programs truly bring that mission to life.

“There was so much enthusiasm from the grant recipients and volunteers regarding the funding that the NRA Foundation has provided,” Tedrick says. “Several kids told me during our meeting that their respective organizations have made major impacts in their lives. It is always great to see smiles from so many kids thanks to the efforts of the volunteers and The NRA Foundation.”