The Fourth of July - A Christmas Story 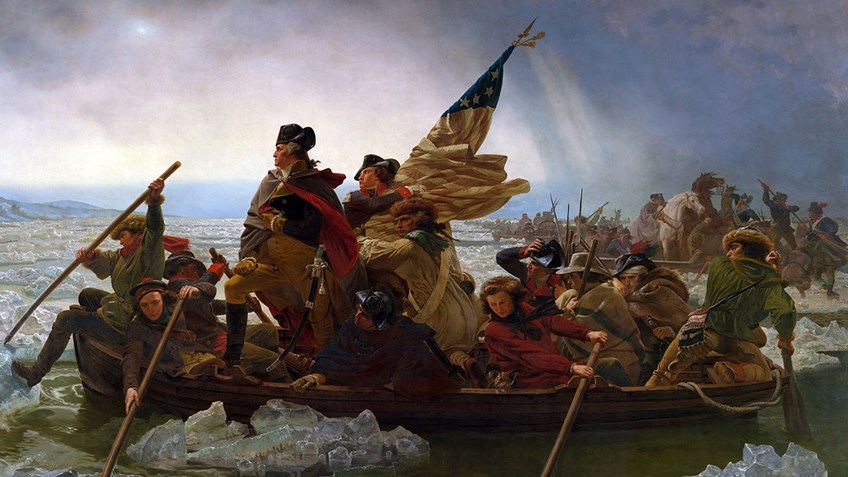 Ah, the 4th of July, what images it conjures up. A warm summer day with the smell of burgers and hot dogs cooking on the grill, a cold beverage in hand, and that clanking noise coming from the horseshoe pit. As the shadows lengthen, the giggling of small children permeates the air as they chase fireflies in the back yard. The splendor of which is interrupted, only too briefly, by cascading showers of colorful sparks and the boom of cannonade-like fireworks - my personal favorite. With all of the parades, picnic food, and fireworks, it is easy to forget how close we came to not having anything to celebrate.

Though preceded by other acts of aggression and ingratitude toward an exasperated monarchy, this was the day, in 1776, that we officially poked King George III in the eye with a sharp stick. For those who may not pay close attention to our history, one might assume that declaring our independence was a simple matter of completing those infamous change of address cards and moving on. Such was not the case, of course, and what had been declared on a hot summer day in July was in desperate need of salvation on a bitterly cold Christmas night in December. Salvation came, in a providential nick of time, at a place called Trenton.
Salvation came, in a providential nick of time, at a place called Trenton.
If you read the American or British correspondence written in the closing hours of 1776 it is difficult to determine which side was more convinced of the imminent collapse of the revolution. On December 21st, General Grant, commander of the British troops in New Jersey, wrote to Lieutenant Colonel Rall, commander of the Hessians garrisoned at Trenton: “The American army was ‘almost naked’, dying of cold, without blankets, and very ill-supplied with provisions. On this east side of the Delaware they have not three hundred men.”

On December 22nd Colonel Joseph Reed penned these words to George Washington: “We are all of the opinion, my dear General, that something must be attempted to revive our expiring credit, give our cause some degree of reputation, and prevent a total depreciation of the Continental money…that even a failure cannot be more fatal than to remain in our present situation; in short some enterprise must be undertaken…or we must give up the cause. In a little time the Continental Army will be dissolved.” Many a Patriot leader must have wondered if the gallows awaited them in the New Year.

In this bubbling cauldron of gloom and despair a plan was cooked up to cross the ice-choked Delaware River on Christmas night and surprise the Hessian German mercenaries in their beds the following morning. Moving men and artillery across the river was nearly impossible. Ice continually clung to the flat-bottomed boats, driving them downstream. Barefoot soldiers with cracked and bloody feet jumped up and down in the flat-bottomed boats to shake off the ice. The hazardous crossing was made even more precarious by violent wind, rain, snow, and hail.
The British were not particularly kind to their country cousins deemed to be rebels.
The Patriots who were about to attack Trenton were all ill-fed, ill-clothed, cold, and sleep-deprived. Many were sick and some were literally walking wounded. They were easy to track, not because of the snow so much, but because of the bloody footprints they left behind as they marched the last nine miles before going into battle. Thoughts of home most surely overtook them as they marched, and it was far more than loneliness that drew their thoughts to home. The British were not particularly kind to their country cousins deemed to be rebels. Homes were burned, cattle slaughtered, fruit orchards cut down, loved ones were imprisoned, and women, including young girls, were raped. As dawn broke on December 26th, the day of the attack, most of these Patriots had less than one week left of their enlistment. They all knew it. George Washington knew it, too.

Still groggy from holiday celebration the Hessians were rousted from their beds that fateful morning by George Washington. After a few ill-fated attempts at escape, and with the realization that they were completely surrounded, the Hessians surrendered. Few were killed or wounded, but among the dead was Hessian Commander Lieutenant Colonel Rall. The Battle of Trenton produced a desperately needed victory and supplies. Don’t forget the supplies― food, blankets, shoes, artillery pieces, gunpowder, and stands of small arms. Christmas had come to the Continentals after all, albeit a day late.

Victory at Princeton soon followed and resulted in the British vacating all but the easternmost part of New Jersey. This had an incalculable effect in restoring the shattered Patriot morale. The war would last for nearly five more years, but enlistments swelled after the double victory. A British traveler, Nicholas Cresswell, noted that, “Volunteer companies are collecting in every county… and in a few months the rascals will be stronger than ever…damn them all.”
Freedom is fragile and never free.
As 1776 faded into the history books many enlistees did indeed go home, but some stayed. In 1832 a man known only as Sergeant R. recounted his personal recollection of Washington pleading with his regiment after the Battle of Trenton to stay on six more weeks. About 200 volunteered to stay and fully half of them died a few days later at Princeton or shortly thereafter of smallpox.

So between sets of horseshoes, plinking at targets, baiting a hook, or eating your third helping of Aunt Millie’s potato salad― for just a little bit, think about a cold day in December and be thankful. Be very, very, thankful. Freedom is fragile and never free. While we enjoy a day with family and friends, today’s American patriots will be on watch in subways at home and in deserts half a world away, making sure we all have a nice day. Think of them and give thanks, too.


Author’s Note: With only slight modification this article appears as it did fourteen years ago. One can’t help but be struck by how the challenges to freedom remain unchanged. In some ways the challenges are greater than ever. The NRA is grateful and thankful for your steadfast support and your commitment to freedom and the Second Amendment. Your support brings honor to the memory and sacrifices of all Patriots throughout history. As we celebrate the anniversary of our independence, we wish you all the very best. May God bless you and yours and may God bless the United States of America― Happy 4th of July everyone.

Reference: Quotes used from The Spirit of Seventy-Six.