The FN FAL: ‘The Right Arm of the Free World’ 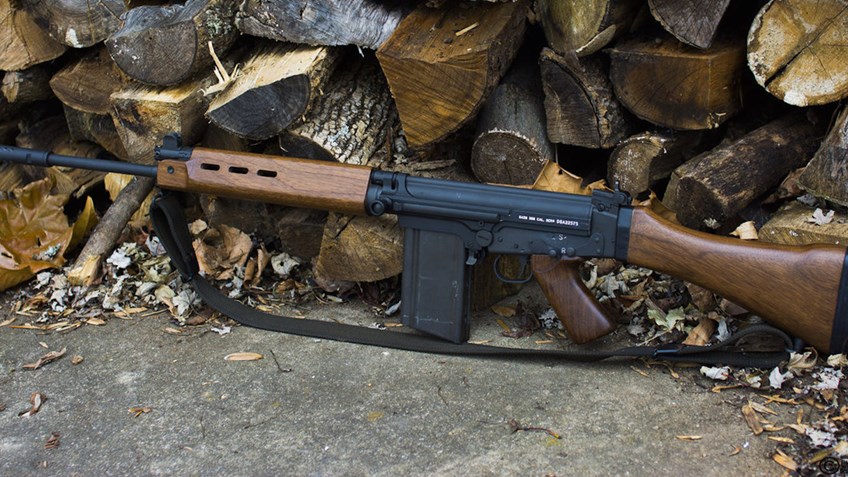 As the world recovered from the chaos of World War II and began trying to rebuild the war-torn reaches of the globe, another conflict was beginning to simmer amongst the ashes of the fallen Axis powers and the mega-industrialized victorious Allies. Within two years, the Cold War had begun.

While tensions between the U.S. and the Soviet Union were mounting, Belgian arms maker Fabrique Nationale de Herstal (FN) released the initial prototype of a rifle that would become synonymous with the Cold War in Europe – the FAL.

The FAL, or Fusil Automatique Léger – French for “Light Automatic Rifle” – was a piston-operated battle rifle initially designed for the British Army, with FN seeking to earn a manufacturing or licensing contract.

The first FAL used the 7.92x33mm Kurz round, developed by the Nazis for their Sturmgewehr 44 rifles, in an attempt to bridge the gap between short-range submachine gun rounds and long-range rifle cartridges.

After several design changes were suggested by the British, including rechambering the FAL to the intermediate .280 British cartridge and the introduction of a bullpup variant, FN and the UK presented the FAL for comparison testing against the U.S. T25, designed by Earle Harvey. The goal was to determine the best rifle to become the universal arm for the newly established NATO, which was stood up in April 1949.

However, the Americans weren’t as interested in determining a standardized rifle, hoping instead to arrive at a standardized cartridge for NATO, so treaty nation forces could employ the same ammo in joint operations.

Using the .30-06 of the World War II-era M1 Garand, U.S. Army Col. Rene Studler shortened the cartridge but used the same projectile weight, and submitted it for testing at NATO. Rather than step down to an intermediate, less powerful round, Studler wanted to continue using a full-power cartridge, given its effectiveness in the last conflict.

The result was the 7.62x51mm round, commonly known as the .308 Winchester. This was the round being used in Harvey’s T25 prototype rifles. The British insisted the rifle trials be conducted using the .280 British round in both the FAL and the bullpup EM-2 rifle against the T25. 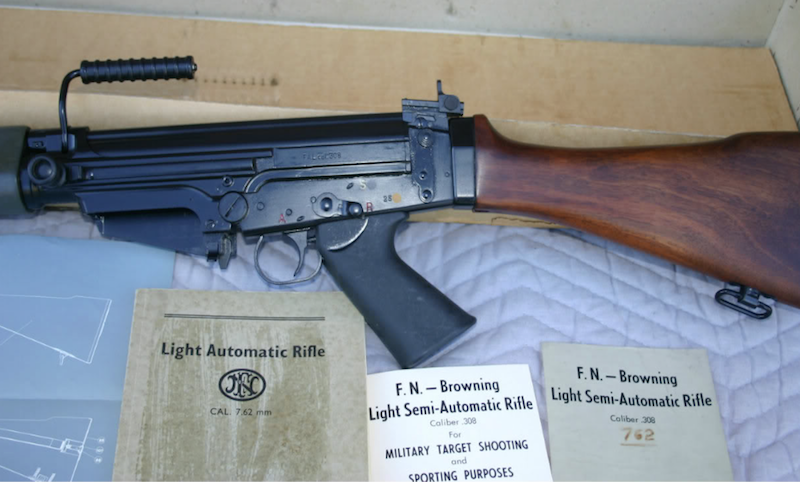 The tests between the three rifles were conducted in 1950, but afterwards the U.S. requested that FN change the British EM-2 and prototype FAL over to Studler’s 7.62x51mm. FN agreed, even offering to build .30-caliber FALs for the United States royalty-free. The British ignored the U.S. requests, and moved ahead with a .280-chambered EM-2.

This divide between allies prompted a meeting between U.S. President Harry Truman and British Prime Minister Winston Churchill, in which it was believed that the U.S. would adopt the FAL as its standard-issue rifle if the Brits used the 7.62x51mm. Britain relented, adopting not only the .30-caliber U.S. cartridge but also the FAL, choosing it over the EM-2.

The U.S., however, wasn’t as eager to sign on officially to field the FAL. Instead, the Americans continued working on other prototypes in the background, improving them until they outperformed the FAL in trials. The U.S. selected the T44 as their next service rifle, and it entered production in 1959 as the M-14. 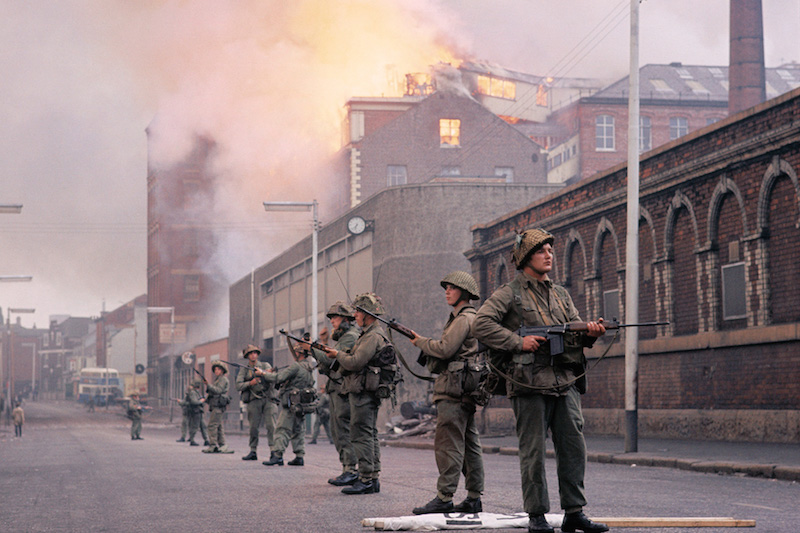 Despite losing the United States as a customer, FN had no problem finding buyers for the FAL, having produced the FAL for five years when the U.S. backed out. Unsurprisingly, Britain was an early adopter, producing the FAL under the designation of L1A1 self-loading rifle. More NATO nations began adopting the FAL after seeing the effect it had against the communist insurgency in Malaysia in the late 1950s.

With NATO banding together against the Soviet Union, the FAL was quickly becoming a symbol of resistance against communism in Europe. Even as the U.S. rapidly moved on from their M-14 to the famed M-16 rifle, the rest of the world’s efforts against the Soviets and their “Red reach” was at the muzzle end of the FAL, resulting in the rifle’s nickname, “the Right Arm of the Free World.”

At its height, more than 90 nations adopted the FN FAL as their primary service rifle, undergoing modifications and variations to meet the demands of warfare, including folding stocks for paratroopers, heavy barreled squad automatic weapon (SAW) versions, and short-barrel “Commando” versions.

Mike Perry of SpecialOperations.com points out that on rare occasion, opposing armies used the FAL against each other, including the Falklands War of 1982, featuring Great Britain and Argentina as belligerents. Humorous accounts were widespread of British soldiers, who were issued the semi-automatic L1A1, confiscating the full-auto FALs from captured Argentine troops. 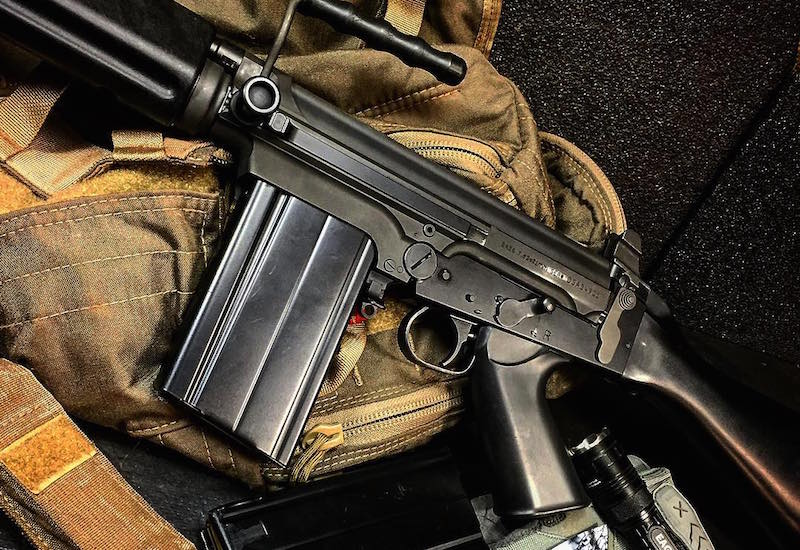 NATO nations benefitted from the advantage of the full-powered cartridge used by the FAL, which outperformed the infamous AK-47 rifle of the Soviets and their communist allies. While the AK-47 fired a 30-caliber projectile (7.62x39), the round used a shortened case with less power and range than the 7.62x51 NATO cartridge.

The FAL reigned supreme in NATO nations until the late 1980s and early 1990s, when the armies who wielded the battle rifle began looking into intermediate cartridge rifles, much like the U.S. M-16 and its 5.56x45 NATO round, as replacements. Leaders and combat strategists saw benefit in a lighter, more maneuverable rifle that used a smaller round, allowing troops to carry more ammunition on the battlefield and be more agile.

In 1986, Great Britain, at one time the rifle’s biggest supporter, moved on from the FAL. Despite efforts to retrofit the FAL to fire the 5.56 NATO round, the conversions never worked out, and other nations began fielding new replacement rifles. 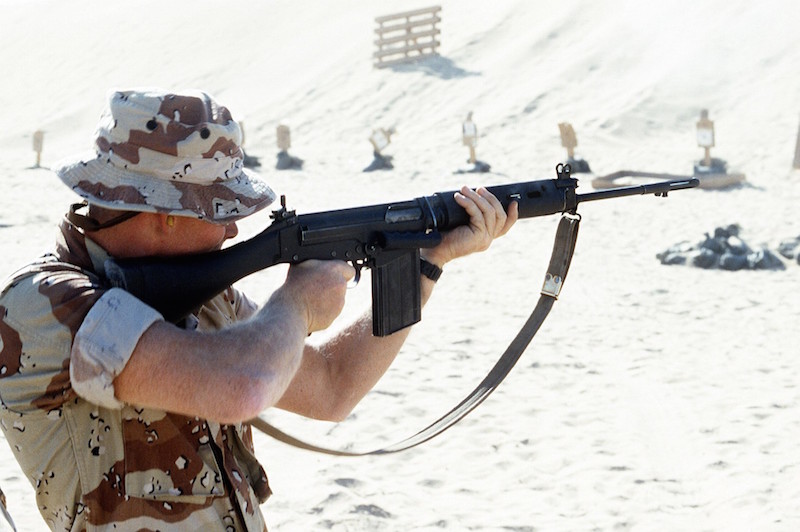 The Berlin Wall -- the most iconic, notorious and representative feature of the Cold War and its oppressive stranglehold not only on Europe, but also on the political affairs of the entire globe -- came down on Nov. 9, 1989, signifying the end of the decades-long crush of Soviet tyranny.

Militaries moved onto new conflicts and ushered in new rifles, but the lasting significance and symbolism of the FN FAL cannot be understated. Surviving politicking and rising in employ against communism, the FAL will always be remembered as the gun that beat back the Red surge. 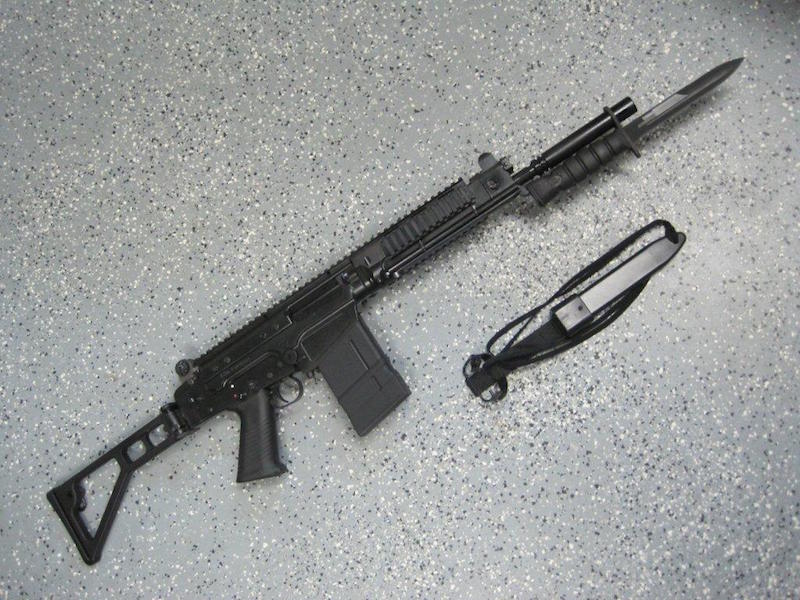 Today, the FN FAL enjoys popularity from military collectors, recreational shooters and hobbyists, with several manufacturers producing new and arsenal-refurbished rifles pulling of FALs from military surplus. The days of the FAL in the hands of forces fighting for freedom may be long gone, but the legacy it cemented will live on in the history books, museum displays and collections of the world’s experts, historians and firearms enthusiasts.

Want to see an FN FAL in person? Visit the NRA National Firearms Museum in Fairfax, Virginia, to see a Harrington and Richardson T48 rifle, an American prototype FAL built during the rifle trials to field the next U.S. and NATO rifle!