The Basics of Riflescopes And How They Work 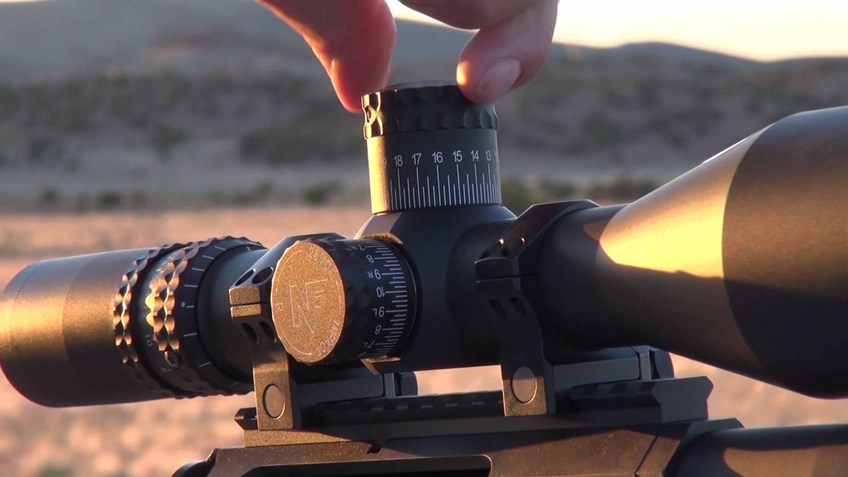 Imagine laying prone on a shooting mat, your favorite rifle parked before you resting on a bipod. You squint downrange across the rolling green landscape, hills and valleys rising and falling gently in a grass sea. In the distance, you spy the faint glint of something catching the sun’s rays, an oddly geometric shape standing out against the lush nature surrounding it.

That’s your target, the polygonal slab of steel you need to hit with your shot. The problem is you can barely see it, as it looks like a postage stamp stuck out in an ocean of land. However, you saddle up to your rifle, and peer through the scope affixed to the top. The tiny speck of target comes into view larger, a set of crosshairs imposed over the center of the plate. You regulate your breathing, gently slide your finger into the trigger guard, and smoothly apply rearward pressure. The rifle fires, and off in the distance, you hear a faint but welcome “pang” as your bullet impacts the plate.

While your mechanics, training and execution are all to thank for a well-placed long-distance shot, that riflescope undoubtedly helped you find and acquire the target you just hit.

Riflescopes, simply put, are devices that contain a series of lenses used for magnification and some type of reticle, an aiming instrument that indicates where your bullet should impact. Think of that telescope you used to check out Venus when you were a kid, and superimpose crosshairs on it.

Scopes come in all sorts of configurations, styles, construction, sizes and price points. Sport shooters can (and do) argue endlessly about which scope maker or magnification or reticle is best for the job, but we’ll spare you the opinions, instead looking at the basics of how riflescopes actually work.

A schematic of a riflescope. (Graphic courtesy/The Truth About Guns)

Evoking that old telescope you swore you saw UFOs with from your bedroom window, riflescopes work quite similarly. Light passes through the objective lens and focuses down into a point within the scope – the aptly named focal point. From here, the image is then inverted and captured by the erector lens or "picture reversal assembly." This system flips the image to the proper orientation, and sends light to the magnifying lens. The magnifying lens moves towards the objective lens while increasing the magnification, and rearward toward the ocular lens when lowering it. The ocular lens focuses the light gathered by the other end of the rifle scope, presenting the image you see when you look into the eyepiece.

A scope’s “eye relief” is the distance between the shooter’s eye and the eyepiece where the shooter can clearly see the entire field of view. In a shorter eye relief, the scope will be further toward the stock of the gun and closer to the user’s face. Conversely, long eye relief scopes, such as those employed on scout rifles, allow substantial room between the eyepiece and the eye, and can be mounted further forward on the firearm.

A majority of riflescope lenses are water and fog-proof, critical when considering the myriad conditions shooters will need to see clearly in. In order to waterproof an optical device, the manufacturer seals any gaps between the lenses and the housing. 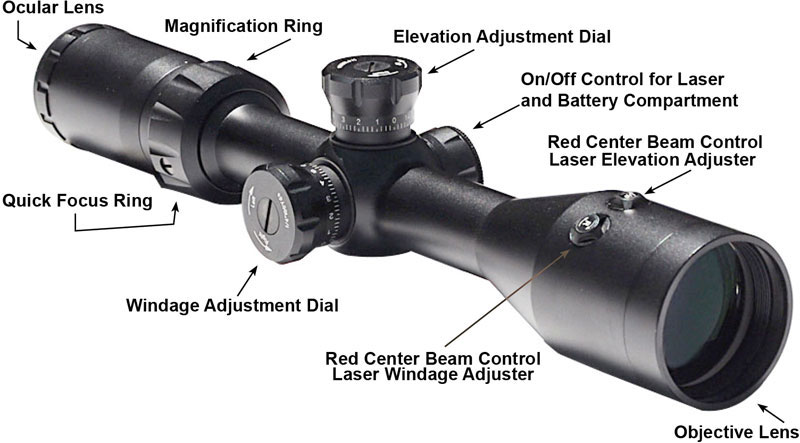 Waterproofing a riflescope is accomplished by using O-rings, which seal and prevent moisture – or dust – inside the tube. While it’s great keeping water out of the optics chamber, waterproofing alone doesn’t prevent condensation – or fogging -- on the lenses, which can occur when moving from one temperature extreme to another (i.e. in a warm hunting lodge into a snowy, freezing field to hunt.) Riflescope engineers overcome this by removing all of the air from the tube and replacing it with gas, such as nitrogen, argon or other combinations. These gases contain zero moisture, and therefore prevent condensation on the lenses.

The magnifying power of the scope indicates how many times the larger the field of view appears compared to the naked eye view. Some riflescopes are fixed power, meaning that you can’t adjust the magnification of the scope. An example of a fixed power scope is a 3X40, meaning the riflescope magnifies the field of view three times to that of the naked eye and uses a 40-millimeter objective lens.

Others riflescopes are variable power, designated by a series of numbers, such as 3-9X40 scope. This scope allows the user to magnify the image anywhere from three to nine times the view of the naked eye, using its 40-millimeter objective lens. Typically, the higher magnifying power of a scope, the more it will cost.

The reticle, which is usually some style of crosshair pattern, is most commonly made of fine wires or etched into a glass plate. Different types of reticles include duplex, crosshair, mil-dot, special purpose reticle (SPR), bullet drop compensator (BDC), and others, with many tailored for specialized purposes or for use with specific ammunition calibers. 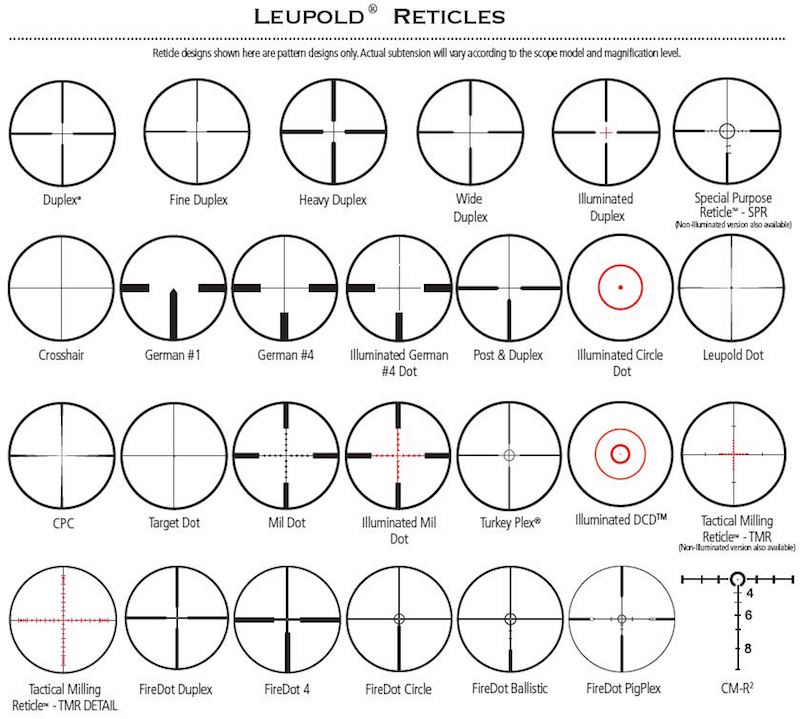 Using windage (horizontal plane) and elevation (vertical plane) adjustments via knobs or “turrets,” the user can zero the riflescope to center their desired target at the center of the reticle. Mil-dot, BDC and some other reticles are designed with markings to help shooters estimate where shots will land at different distances, typically longer than their zero, to prevent having to adjust the scope’s zero. 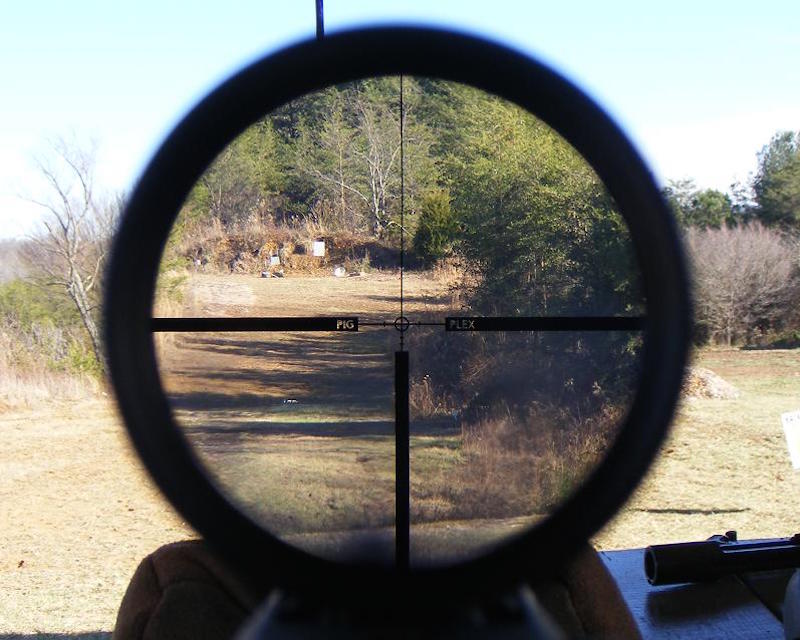 Looking through a Leupold riflescope. Notice the reticle and the magnification of the scope. (Photo courtesy/Mcstennett via Photobucket)

When purchasing a riflescope, be sure you understand how to mount it to your firearm and what size scope rings it needs. Many modern rifles come complete with scope bases, like and integral dovetail or bolt-on 1913 Picatinny rail mount, which scope rings will attach to. Scope rings can come as two separate pieces, or as a one-piece cantilever unit. In the U.S., riflescope tubes are built in either 1-inch or 30-millimeter models, and the scope rings must be sized correctly for the diameter of your scope tube.

Additionally, based on a number of factors – height of your cheek weld on the stock, eye relief, size of objective lens diameter, action type, bolt life, etc. – you’ll need to use scope rings that of the right height. Lower rings seat the scope closer against the rifle and require a lower position to achieve proper sight picture, while higher rings lift the scope off the rifle, allowing clearance for bolt-action handles to clear or larger diameter objective lenses to fit on rifles.

At the risk of oversimplification, this was meant as an introductory primer into how riflescopes are built, how they work, and the peripheral equipment that is needed to properly employ them, whatever your application. Riflescopes come in at all price points, with models ranging from less than $100 to five figures worth of precision optics.

All too often, new gun owners want to invest in a top-dollar rifle but fail to equip it with comparable glass. However, regardless of how good your rifle and its riflescope is, the most important factor in becoming a better shooter is training to master the fundamentals and build your skills. The best optic in the world won’t cure bad shooting fundamentals.