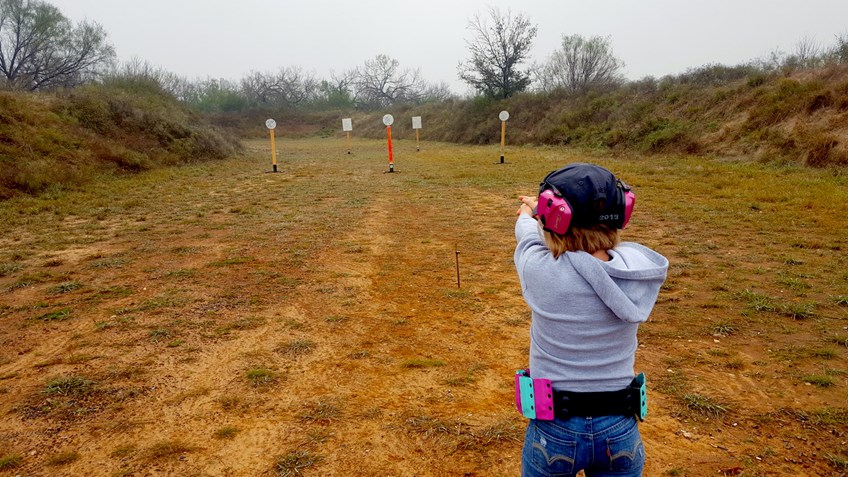 At a glance, eight-year-old Addysson Soltau looks like your everyday American girl: a straight-A student and cheerleader who loves being outdoors and spending time playing with friends.

If you ask her what her favorite thing in the world is, however, you might be surprised at her response: shooting – and not just plinking cans in the backyard, either.

“Alpha Addy” is an up-and-coming junior competitive shooter, having picked up the sport when she was only six years old. Her foray into competitive shooting began when she discovered a video produced by NRA Women about youth multi-gun shooter Katelyn Francis, and was instantly inspired. 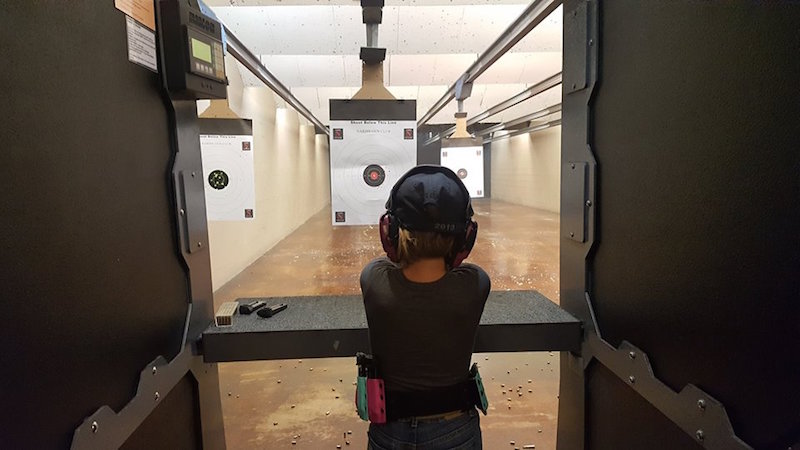 Addy training with her Ruger SR-22.

“I looked at all her videos and here was a girl a little older than me having fun shooting firearms. I didn’t think girls could do stuff like that,” Addy said. “If it wasn’t for that video I might have never asked to learn how to shoot, and I probably wouldn’t be where I am now only two years later.”

Discovering Katelyn opened the doors to a new kind of athlete for Addy, introducing her to new role models like Julie Golob, Kirsten Joy Weiss, Cheyenne Dalton, and Abby Votava – all accomplished women in the shooting sports.

Addy decided she wanted to give this exciting new sport a try, and asked for a gun. Her first firearm was a Crickett My First Rifle chambered in .22LR, followed by a Ruger SR-22 rimfire pistol for her eighth birthday in September 2016. Addy’s uncle, Marine Corps veteran Johnny Campos, worked with Addy to teach her the basics of shooting, firearm handling and safety, and she began enjoying her trips to the range for target shooting.

It wasn’t long before Addy grew bored with simply shooting at steel targets, and wanted to step up her game. Having watched videos of Faith and Jenna Collier, two Texas sisters that became junior competitive shooters, she knew what she wanted to do next.

“They are close to my age and it looked like they were having fun so I asked if I could try it,” Addy said. “We spent every weekday the next few months practicing and training.” 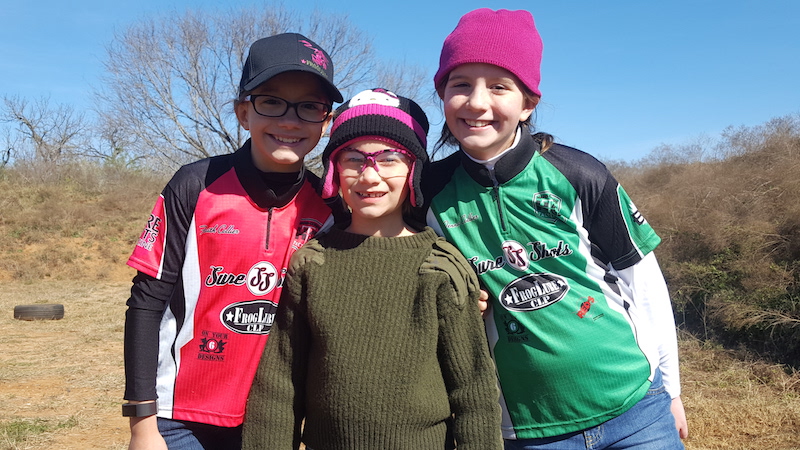 Addy, center, with Faith and Jenna Collier at the range.

Addy shot her first match on Dec. 10, 2016, alongside her new friends Faith and Jenna, and competed in her second match the following day. Two weeks later, she joined the sisters on the Austin Sure Shots Women’s Pistol League as one of their sponsored junior shooters.

“My biggest achievement so far was just showing up to my first match. I was so scared and nervous. I didn't know how people would treat me or what they would think about me being there,” she said. “I mean, I am eight, and shooting on a squad with adults, but everyone was really happy I was there and was so helpful and supportive.” 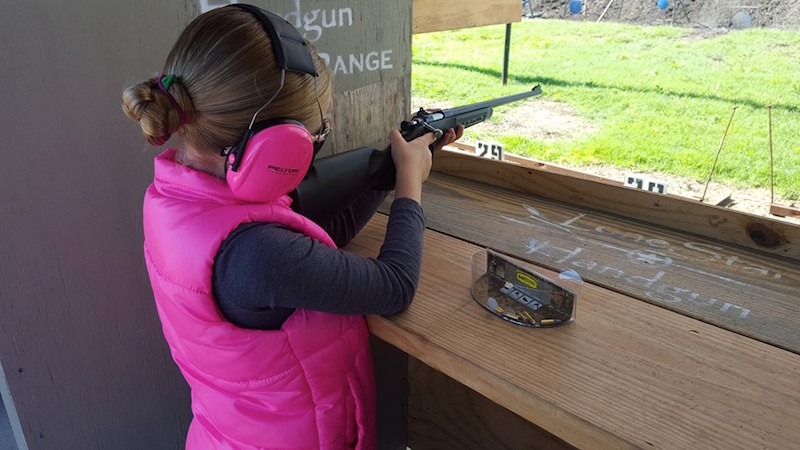 Addy said the key to her rapid rise and success is her dedicated training regimen, which she fits into a packed schedule. Each day when she returns from school, she tackles her chores and homework first, then starts a warm-up exercise of 150 push-ups and sit-ups. A blue belt in karate and tournament competitor, Addy spars for an hour if she is preparing for an upcoming tourney, or practices techniques, combinations and knowledge work when training for an upcoming belt test.

“After I get my competition belt on, check that my magazines are empty, and put them in my pouches, we go over all the safety rules plus a few extra every single day before I am allowed to even touch my gun,” she said. “I point out and name all the parts of my handgun and then check to make sure the handgun is clear and safe.

From there, she goes through drills including racking the slide, drawing from her holster and timing her draw, magazine changes, sight alignment, trigger control and dry firing. After one final safety check, Addy can finally take a break to go play with her younger sister.

Campos said despite the amount of time Addy spends training, she’s well rounded, earning good grades and staying active, all of which she enjoys. In addition to her budding competition shooting and championship karate accolades, Addy is in gifted and talented classes at school, is involved in Girlstart STEM programs, cheers at local football games, loves fishing and boating, working out, and even attends a horsemanship and equestrian camp.

Her entry into competition shooting has been well received not only by Campos, but also by her “new family.”

“It’s been so great. At one of my matches I am the only lady and only junior. As long as I am safe I get treated just like every other shooter there,” Addy said. “At the Austin Sure Shots Women’s Pistol League, there are like nine other girls that are also junior competitive shooters that are my age or a little older so it's like a little family.”

“We are lucky to live in the city and state that we live in. In San Antonio, we are surrounded by three major military bases that we spend a lot of time at, so the reactions are usually positive,” Campos said of the surrounding Texas community. 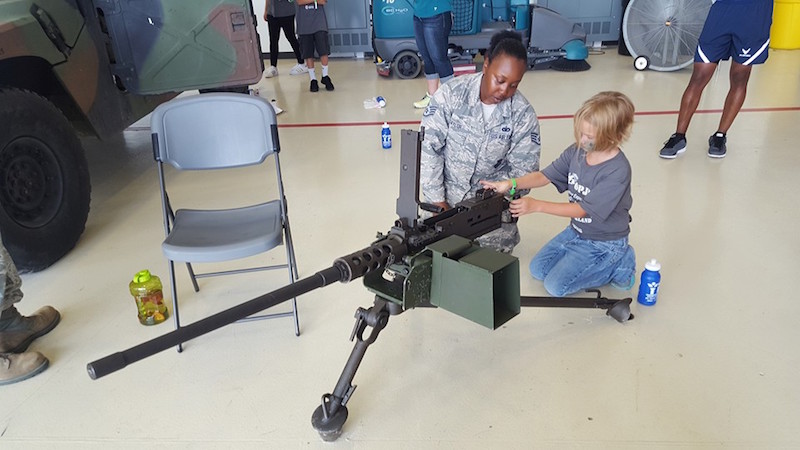 Addy checking out military equipment with a U.S. Air Force staff sergeant at nearby Joint Base San Antonio, Texas.

Addy said she is dedicated to progressing her skills in 2017, improving her shooting and expanding the disciplines she competes in. Having already earned sponsorships from Sure Shots Magazine, EAR Custom Hearing Protection and others, she has a great foundation to build upon.

“This year I want to get better with my current gun. The rule is that I need to get good with what I have before I am allowed to add stuff to my firearms. I really want to earn my NRA Marksmanship Qualification in rifle and pistol,” she said. “My future goals are to slowly get into 2 and 3-Gun matches and meet some of the people that inspired me to start shooting.”

More than anything, Addy said she wants to prove to other young girls that they also can experience the fun of shooting, and that with proper firearm safety and training they can accomplish great things.

“I really hope that a little girl sees my YouTube videos and is inspired the same way I was by Katelyn Francis, and I hope she asks her parents about firearms or if she can learn how to shoot,” Addy said. “I also hope parents see this and talk to their kids about being safe around firearms. My sister is four and she really wants to learn to shoot when she is older. She already knows all the safety rules and really likes the Eddie Eagle [GunSafe Program] cartoons.” 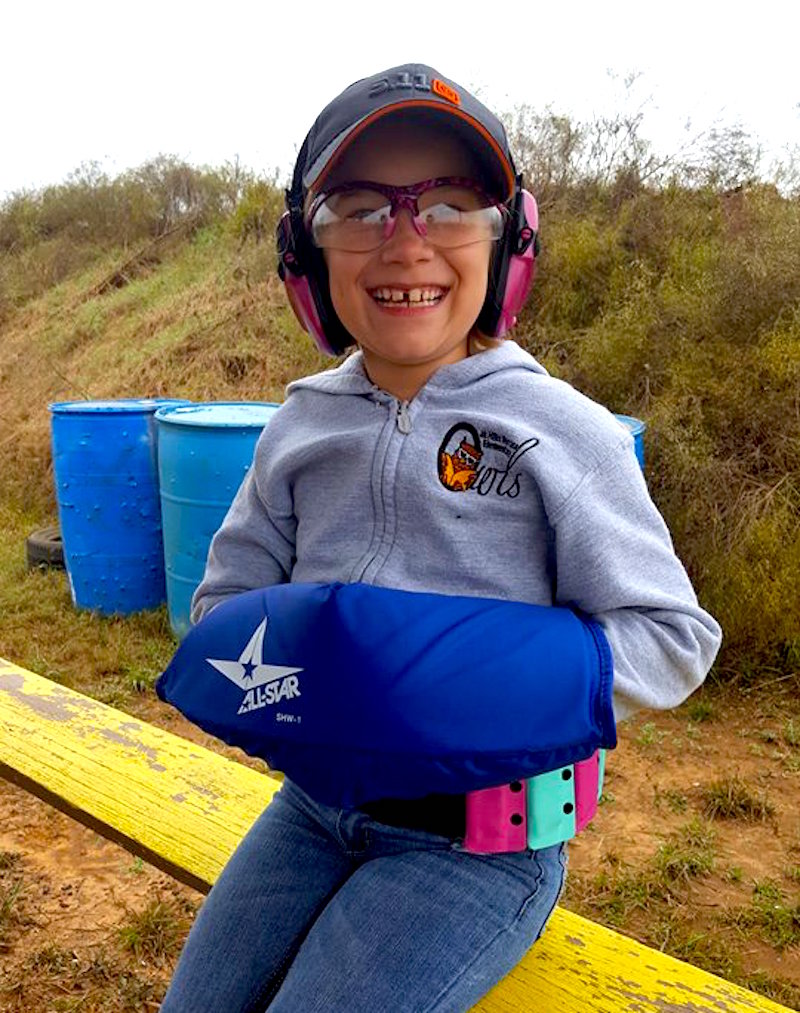 (All photos and videos courtesy/Johnny Campos)