The Road to Gold 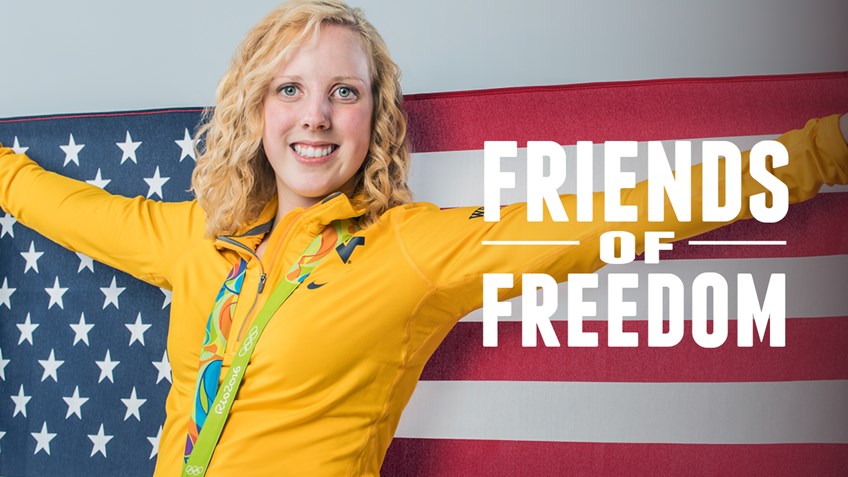 
During days of career distress, my Nana would always tell me, “Kristina, Rome wasn’t built in a day…” Well Nana never saw Ginny Thrasher in action.

"Shooting has always been about becoming the best version of myself,” Ginny humbly says. “I was never trying to specifically make the Olympic Team; I was just trying to be the best shooter I could be.”

Unlike many athletes, Ginny hasn’t been honing her craft since she could walk. In fact she’s only been shooting competitively for the past five years. Her first love was ice skating and she competed often — even practiced before school. Her interest in shooting began with an adventure with her grandfather, but Ginny’s dad, Roger Thrasher, tells me the shooting DNA runs through both sides of the family. “Both sides of the family have a long-time hunting heritage,” he says. “On her paternal grandfather’s side, deer hunting was a big pastime amongst her grandfather, father, uncles and cousins. On her maternal grandfather’s side, it was very similar. Her Aunt Vicki hunted often when she was Ginny’s age and loaned Ginny her first competition smallbore rifle when Ginny was just starting on that gun. Finally, it was Ginny’s two older brothers that wanted to hunt with their grandfather as soon as they were old enough, which inspired her to also ask to go hunting with Grandpa."

That hunt with Grandpa struck a chord in Ginny. Although she continued skating, the laces took a back seat when it came to the rifle. She began shooting in August 2011 and started high school a month later. Fortunately, in 2010 West Springfield High School applied for an NRA Foundation grant to launch a rifle team. The school received $5,000 in merchandise grants that both Ginny and her mom, Valerie, said was crucial to her success. “The high school team was able to get started 6 years ago with the help of The NRA Foundation, which supported them in getting a set of equipment for five shooters to start the team,” says Valerie Thrasher. “The NRA Foundation has been very supportive over the years with helping us get rifles, equipment and training aids for the high school students. Ginny definitely benefited from and used that start-up equipment as we were then able to slowly purchase equipment for her.”

"Shooting through my high school was a huge part of my early success,” says Ginny, “Without those opportunities that were provided by the NRA Foundation grant, my high school team may not have existed.”

Valerie Thrasher is not only Ginny’s mom and a full-time nurse—she was also one of Ginny’s assistant coaches and continues to coach at West Springfield High School. When Ginny took up shooting, Valerie jumped on board and they both took rifle classes together. From that point forward, her father said, Ginny just excelled. “Ginny has always been on a fast development path—mainly because she was a sponge for learning about shooting and trying to apply it immediately to her practices and competitions,” Roger Thrasher proudly beams. “I distinctly remember the summer after her high school sophomore year as being one of great progress, even if done in an unusual order. Because she got a relatively late start in shooting, she ended up doing multiple competitions and clinics that summer. She started with the NRA Advanced Smallbore Camp in Vermont, then came right back for a WVU rifle clinic, then went to the NRA/USAS/CMP three position air rifle championship in Alabama, then immediately to the NRA Smallbore Competition at Camp Perry—where she won her first big award: high intermediate junior in iron sights—then she did the NRA Intermediate Smallbore camp before closing out the summer with the CMP advanced standing camp! That just exemplifies her dedication to her shooting craft, and she has continued a similar path right up through today.” 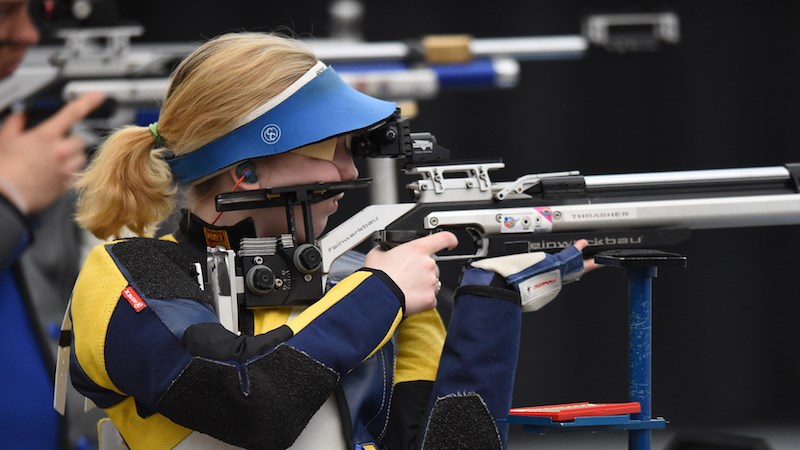 Ginny’s path to gold continued at West Virginia University where her Coach, Jon Hammond, also applied for an NRA Foundation grant. The West Virginia Mountaineers received three grants—one in 2012 and two in 2016—which provided nearly $12,000 in gear, including Anschutz 8002 air rifles, pellets, gloves, boots and a match set sight. Hammond says the goal of the grant was to enhance the team’s equipment and allow more training with live ammunition. A former Olympian himself, having competed in both Beijing and London Olympics for Great Britain, who also garnered medals in the Commonwealth Games for Scotland, Hammond says the past year has been nostalgic. “It has been amazing watching her journey over the last 6-12 months and especially the summer,” says Coach Jon Hammond. “It certainly brought back many memories for myself, and despite not competing it was just as much of a thrill to live it through Ginny and be a part of her experience. It was great to see all of her hard work and all her preparation pay off the way it did down in Rio."

And pay it did. While Ginny originally had her eyes on the 2020 Tokyo Olympics, her shooting skill set said otherwise when she qualified for Rio in both women’s air rifle and smallbore. But even at the games, Ginny held a steady hand. “I was never focused on winning a medal,” she says. "Even when it became clear that I was in contention, I was incredibly focused on my breathing and my process because I knew that was the only way to take me to the result I wanted.”

What a result it was, with her mom, dad and two older brothers nervously watching their 19–year-old family member upset China’s gold-medal champion Du Li in the 10-meter rifle competition and take home the first Gold medal of the 2016 games for Team U.S.A.

"Winning the first Gold for Team USA was a completely overwhelming experience but one that instilled me with a great sense of pride for my country,” says Ginny enthusiastically. “Standing on the podium was a great moment for me, and it encompassed everything the Olympics mean to the US and my sport of competitive shooting. It also gave me a voice to help more people realize how amazing competitive shooting can be and how it helps create such great qualities in the athletes. I wish more spectators understood my sport. I hope that this first Gold helps make competitive shooting a more popular sport within the United States.”

As you can imagine, the family is overjoyed with Ginny’s success but wanted to point out that there were a lot of dedicated hands helping Ginny on her road to gold. “I’m a firm believer that it takes a village to raise a child,” says Valerie Thrasher. “Ginny was so fortunate to have a strong community around her. Rifle is a small community and you get to know each other when traveling to all of the high level competitions. Ginny had great coaching at the Arlington-Fairfax Chapter of the Izaak Walton League of America in Centreville, where her air rifle journey began her freshman year of high school. Everyone on the range is a volunteer and I would not be able to guess the number of hours that Coach Bucky Sills and Coach Oscar Starz spent with Ginny. She also practiced a lot at the NRA range in Fairfax and the staff there was also wonderful to her. Kevin Wright, one of the range safety officers, would let her know when she could come to the range and get extra practice. She had support from all of the high school coaches in the area as well. If she wanted to practice, there was always someone who would open the range and stay with her.” 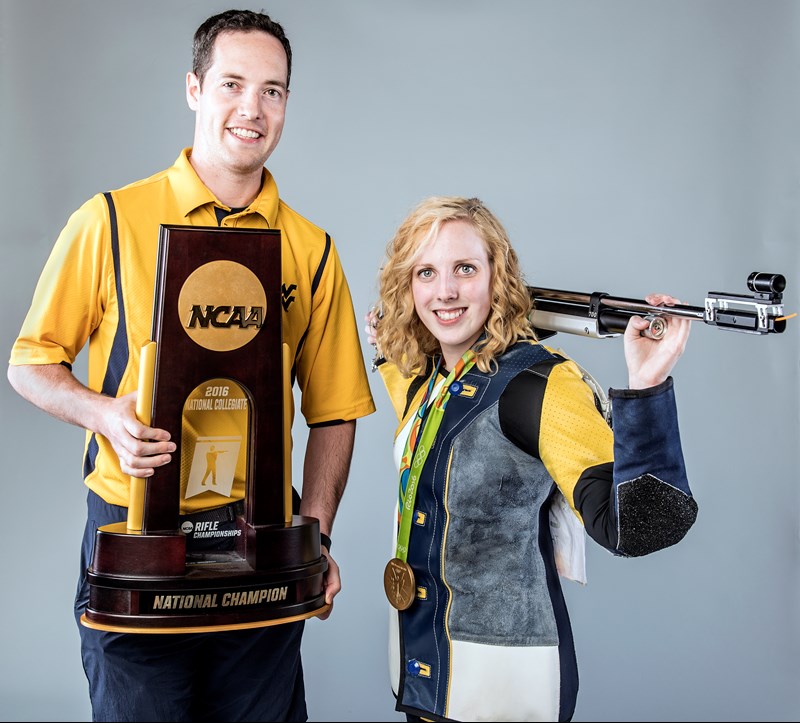 “We are grateful to the many organizations that have supported youth shooting sports,” Roger Thrasher states. “Not just for Ginny, but for hundreds of youth shooters the opportunity to learn discipline, safety, responsibility, maturity and leadership through the shooting sports provides valuable life lessons."

So maybe Rome can’t be built in day, but Ginny Thrasher just proved it can be built in five years with passion, purpose and persistence. What’s next for this charismatic Olympic Gold Sharpshooter? The journey continues to Tokyo and I’m sure I can speak for all of us when I say, we can’t wait!

Apply for an NRA Foundation grant to fund educational shooting sports programs in your area and learn more about The NRA Foundation at www.nrafoundation.org.