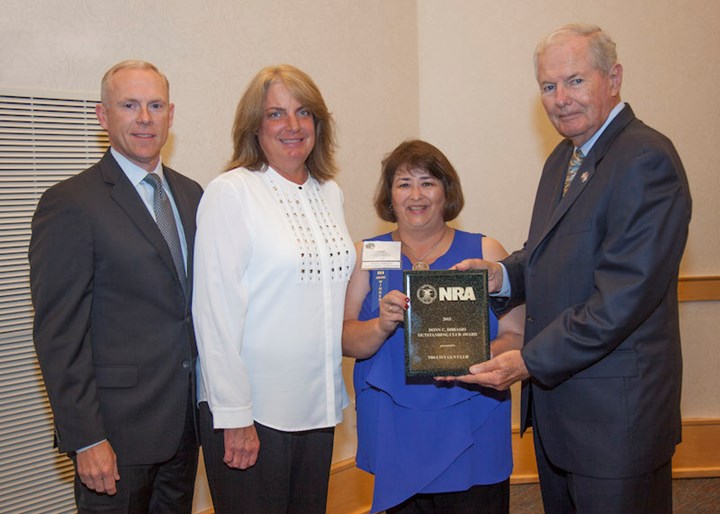 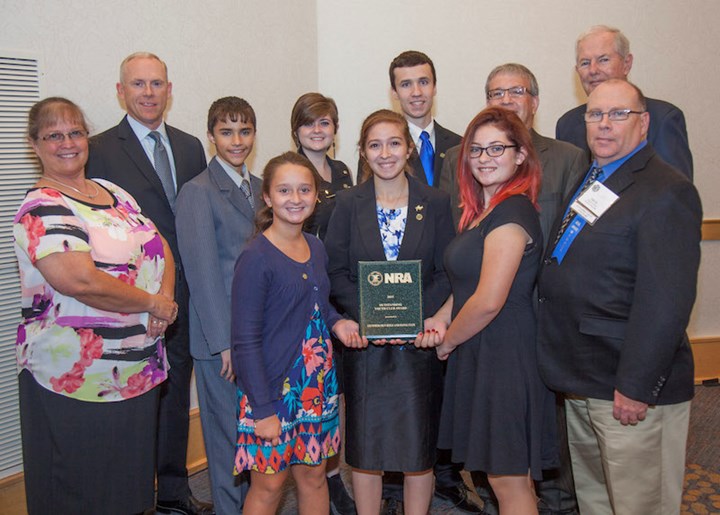 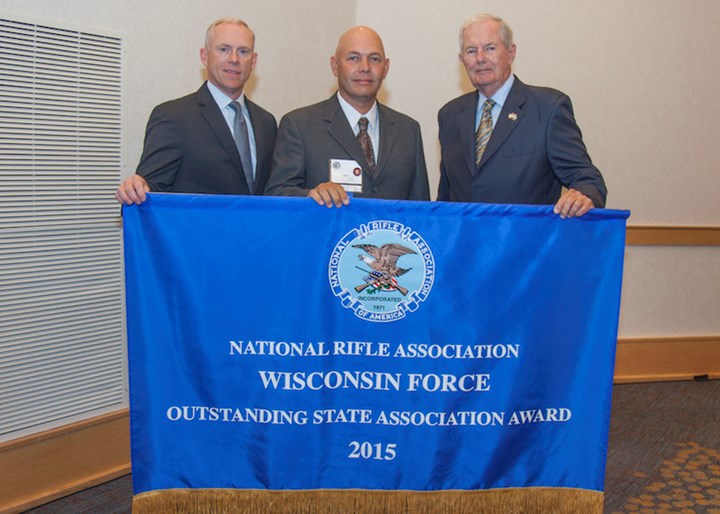 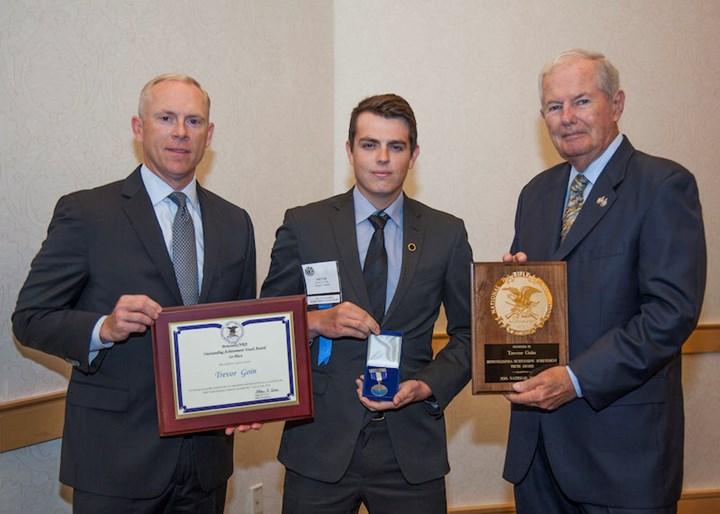 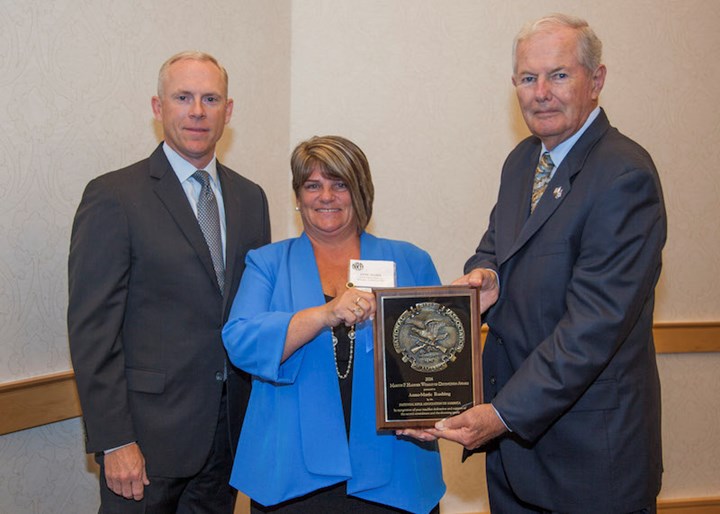 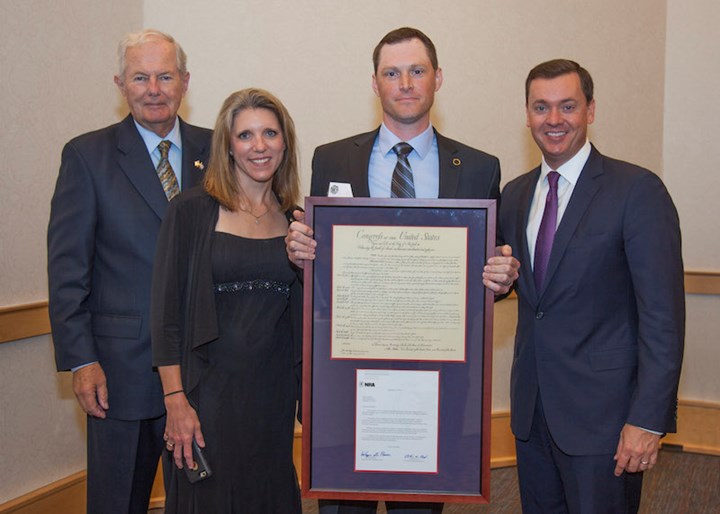 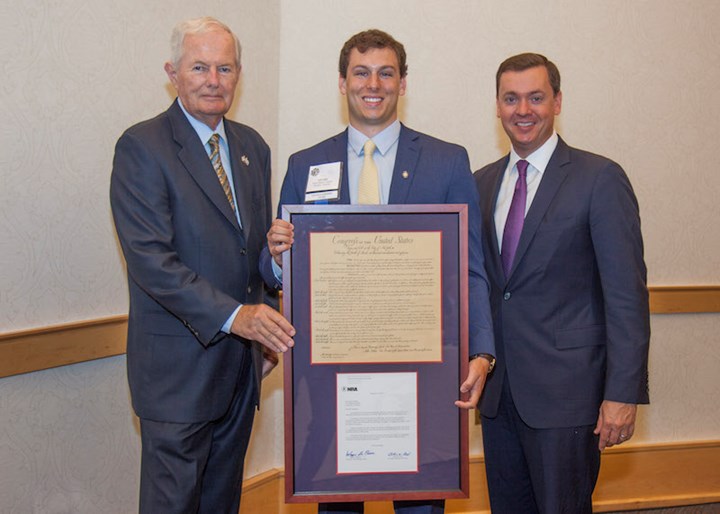 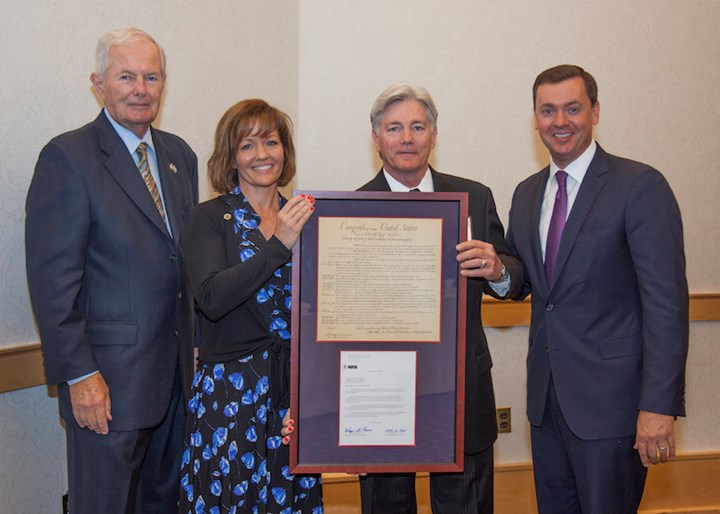 The National Rifle Association honored several individuals and organizations at the association’s board meetings in Arlington, Virginia, Sept. 9, for their outstanding achievements and service to the NRA and law-abiding gun owners across the nation.

These award winners have made unique commitments to the gun-owning public and their communities, provided extraordinary efforts to promote and further the shooting sports, and worked to defend Americans’ Second Amendment rights.

The Tri-City Gun Club, 100 percent-NRA member club that has held Gold Medal status for several years, exemplifies what it means to be an NRA affiliated club. In 2015, Tri-City Gun Club sponsored three NRA Counselors in the club to promote training for Instructors and Range Safety Officers. They received a NRA Range Grant and will use it to create more handicap parking spaces and easier access to pistol and rifle ranges for disabled shooters. Additionally, the Tri-City Gun Club also promotes many active junior and women’s programs such as NRA’s Women on Target and Youth Hunter Education Challenge, Boy Scout Camp and Shoot, and 4-H shotgun programs in three different counties.

Stemmers Run Rifle and Pistol Club was founded in 1945, and is a charter member of the Associated Gun Clubs of Baltimore. During World War II, citizens exempt from military service formed the “Minutemen,” founded to protect, or in the event of an enemy attack on the home front, destroy, strategic installations, such as bridges and overpasses. While the “Minutemen” disbanded after the war ended, their friendship and interests continued and led to the formation of the Stemmers Run Rifle and Pistol Club. This club not only makes extraordinary contributions to the community by teaching marksmanship and firearm safety to their youth, but they have a willingness to share their shooting knowledge, skills and attitude with youth on any team.

Wisconsin FORCE maintains a constant membership recruitment program to organize and recruit new people into the shooting sports through NRA mailings, individual recruiters, gun shows, and special events. Wisconsin FORCE actively communicates with all of their more than 2,000 members through a monthly printed newsletter and notices via social media. Additionally, Wisconsin FORCE has been a leading state association dedicated to the mission and agenda of the NRA. Under the leadership of its outstanding Board of Directors and its lobbying efforts, Wisconsin FORCE has provided Wisconsin advocates the guidance and tools to successfully advance and protect gun rights in their great state. Because of their tireless work, Wisconsin has seen the passage of monumental laws, including the enactment of concealed carry, Castle Doctrine and the repeal of the 48-hour waiting period.

The Most Outstanding Friends of NRA Committee is presented each year to the committee that had the most outstanding achievement and holds the honor of highest net income out of all of the 1,100 Friends of NRA committees. For the third year in a row, this award goes to Chairman Darrell Hester, Treasurer Sandra Hester and their 20-year Mid-Coast Friends of NRA Committee from Victoria, Texas. Since its inception in 1993, the Mid-Coast Friends of NRA committee has raised over $1.8 million for the NRA Foundation. Their 2015 banquet consisted of 88 national sponsors, 748 attendees and raised more than $240,000 for the NRA Foundation.

The Brownells/NRA Outstanding Achievement Youth Award recognizes junior shooters who best meet the standards of excellence, both in the shooting sports and educational achievements. Requirements include:outstanding academic achievement, completion of an NRA Firearm Training Course, participation in the Winchester/NRA Marksmanship Qualification Program and submission of an essay on “What the Shooting Sports has Taught Me.” This year’s winner is Trevor Goin from Prospect, Virginia. Trevor is an all-around shooter, having competed in 4-H and YHEC competitions and won several trap and skeet shotgun competitions. Additionally, he is an NRA Distinguished Expert in rifle and shotgun, making him a Double Distinguished Expert. His eagerness to give back to these organizations through mentoring younger shooters and volunteerism earned him a selection as a 4-H Ambassador to promote the Virginia Shooting Sports program, and he hopes to pursue a career as a law enforcement officer.

The NRA Marion P. Hammer Woman of Distinction Award recognizes the NRA Female member who best meets the standard of excellence in the shooting sports and community achievements. Ms. Marion P. Hammer has influenced many in her fight to preserve Second Amendment freedoms. As the creator of the Eddie Eagle GunSafe Program and first woman president of the National Rifle Association, she has significantly impacted her community, her state and the nation.

The winner of the 2016 NRA Marion P. Hammer Woman of Distinction Award is Ann-Marie Rushing of Wingate, North Carolina. Anne-Marie is the owner of Take Aim Training Range. After years of coaching and volunteering with North Carolina’s YHEC program, she identified the need for a local range that catered to families, and along with her husband Stony, purchased an existing range in South Carolina. Over the years, the range has served over 800 members and their families. Law enforcement and military trainers have been given the opportunity to utilize the range to qualify and improve their personal skills. Each year, the range hosts YHEC events that allow local teams to practice free of charge. Women in the community are grateful for the programs and support Ann-Marie provides, and young women look to her as a role model who encourages them to push their limits and compete with – and beat -- the guys. She has also helped over 3,000 students obtain their permits for both hunting and self-defense.

The Jay M. Littlefield Memorial NRA-ILA Volunteer of the Year Award recognizes an individual NRA member for his or her meritorious defense of the Second Amendment.

The recipient of the 2015 Jay M. Littlefield Memorial NRA-ILA Volunteer of the Year Award is Gary Knechtel of Ypsilanti, Michigan. Gary has been an active and dedicated Election Volunteer Coordinator since 2013. He works hard to seek out valuable NRA grassroots opportunities in Michigan and consistently works as a passionate and helpful volunteer. As a busy father and husband working full-time and raising two young daughters, Gary always finds time to volunteer for the cause. In 2015, Gary helped organize various successful grassroots events, including help with the NRA University & Grassroots Workshop at Cabela's, along with membership recruiting. He has been instrumental in setting up successful community and youth events at his local sportsmen's club. He consistently volunteers to work the NRA-ILA tables at gun shows and events, and he can always be counted on as a reliable and great representative of NRA and the EVC program. He attends various local meetings to promote NRA-ILA and recruit NRA-ILA FrontLines volunteers. Gary has recruited more volunteers for the program than any other EVC or volunteer in Michigan. He is always working to recruit new people into the ILA grassroots programs including new Second Amendment Activist Centers as well as volunteers. Gary is a steadfast volunteer year-round and a true grassroots champion for the state in all areas of activism.

The NRA-ILA Youth Leadership Award recognizes an individual college student or recent graduate for his or her meritorious defense of the Second Amendment.

The recipient of the 2015 Youth Leadership Award is Stuart Dedmon of Memphis, Tennessee. During Stuart’s time as an NRA Campus Coordinator he has hosted a successful NRA-U event at the University of Memphis and facilitated tabling events at local gun shows, handing out literature and NRA materials to the attendees, while also educating them of opportunities to get involved in the fight to protect our Second Amendment. In addition to his work as a NRA Campus Coordinator, Stuart serves as the Midwest Regional Director and Tennessee State Director of Students for Concealed Carry. In his work with the NRA and Students for Conceal Carry, Stuart has successfully lobbied for several pieces of legislation, particularly Tennessee SB2376, which as enacted, permits full-time employees of state public colleges or universities who possess a handgun carry permit to carry a handgun while on property owned, operated or controlled by the employing college or university. This fall semester, he plans on hosting several information and safety seminars at public universities across Tennessee to promote proper handgun safety and educate the campus community on the newly-enacted legislation. Since the inception of the NRA Campus Coordinator program at the NRA Annual Meetings and Exhibits in Nashville, Stuart gone above and beyond expectations and excelled as ILA’s best NRA Campus Coordinator. He has proven time and again his dedication to promoting the Second Amendment to college students.

The Instructor Recruiter of the Year Award is presented in recognition of the recruiting excellence of an individual Instructor or business.

The recipient of the 2015 Instructor Recruiter of the Year Award is Andre Macon of Farmington Hills, Michigan. Andre earned this honor with his great commitment to the NRA and an incredible dedication to membership recruitment in 2015. He made it his mission to become a top Instructor Recruiter in the country and accomplished precisely that, recruiting over 600 members. An active NRA recruiter for a little over five years, Andre has already brought in more than 2,400 NRA members. Thanks to his commitment to our freedoms and the active promotion of NRA in his classes, Andre is well on his way to another banner year in 2016. He is poised to again finish as a top Instructor Recruiter in the country, further solidifying his status as a top NRA Recruiter, regardless of category.

The Gun Show Recruiter of the Year Award is presented annually in recognition of excellence of a recruiter at gun shows and other public events.

The recipient of the 2015 Gun Show Recruiter of the Year Award is Jane Snapp. Since 1999, Jane and her husband John have attended gun shows to recruit NRA members. Lovingly known as “The NRA Lady” in the Dallas-Fort Worth area, Jane can been seen at every gun show signing up many of the show attendees. With nearly 20,000 members recruited in her career, Jane is clearly doing a lot of things right! Jane said “if you treat the customer right, with respect and attention, it makes it much easier to sign them up again the following year.” Jane not only recruits for the NRA, but also is the first call for volunteers in the area. She is always willing to help out at NRA staff events to further increase the NRA membership. Working with Jane allows you to see her passion and dedication in preserving the Second Amendment, and that drive to succeed never stops. She is a pleasure to work with, a true champion of the Second Amendment, and embodies the ideals of this organization. Jane is always promoting the NRA everywhere she goes, and we couldn’t have a better supporter for our freedoms.