The Only Limitations Are the Ones You Set for Yourself 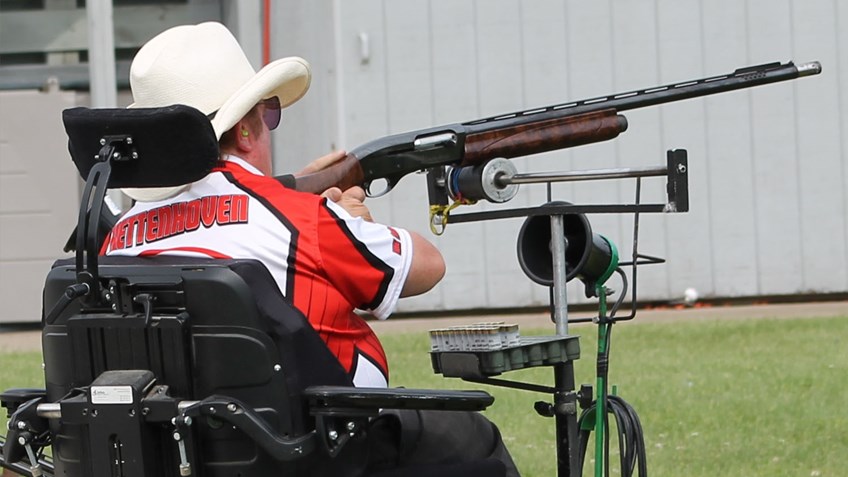 More
SUBSCRIBE
Wisconsin native Steve Kettenhoven has been hunting since he was 12 years old. Born with Cerebral Palsy, he relied on the use of crutches to get around. But, that didn't limit him from living life to the fullest, especially when pursuing his passion for the outdoors.

Steve has been happily married for 32 years, raised three children, and has seven grandchildren. He's hunted elk in Colorado and New Mexico, black bear in Newfoundland, as well as brown bear in Alaska. He has also fished on a national bass fishing tour, manufactured and sold musky lures, and produced and hosted an outdoors TV show called The Sportsman’s Spotlight.

In 2000, Steve suffered from a fractured ankle and never fully recovered. He soon found it difficult to go long distances and began to rely on a wheelchair to get around.

Nine years later, Steve decide to take up a new hobby: trap shooting. However, he quickly found that his limited arm strength from being confined to a wheelchair made it difficult for him to lift his gun.

But, that didn’t stop him.

He came up with an idea for a gun rest that attaches to his wheel chair. He tried a couple of different styles before he settled on what he calls the EZ Swing Gun Rest. Steve designed the unit on his computer while his friend who owns a machine shop, made his design come to life.

“The unit consists of a 3/8 inch stainless steel shaft that is supported be an aluminum bracket that attaches to my chair,” explains Steve. “The actual gun rest is a turned aluminum spindle that kind of looks like a giant thread spool. I have linear bearings pressed into the spindle which allows it to easily slide back and forth on the steel shaft.”

The EZ Swing supports the weight of Steve’s gun making it easy to swing left and right while shooting moving targets quickly. But it wasn’t exactly easy to use at first. “It took me a while to get use to intercepting clay targets as I have to take the target at the level I have the rest set at. I’m not able to follow the upward path of the target with the barrel. Once I got use to where I had to focus my point of impact, I went from breaking 12 out of 25 targets to averaging about 20 birds per round.”


Steve’s dedication to invent his gun rest not only allowed him to purse a new hobby, but excel at it. He currently competes in a 15 week summer trap league, the PVA National Trap Shoot Circuit, as well as a number of open tournaments throughout the year.

But when he isn’t out on the clay field, you can find Steve at the bowling alley. He bowls in a 32 week league with a specially designed ramp that attaches to his chair. He currently holds a 160 average and has won a few tournaments. But that’s not all. He also competes in a curling league during the winter!

Despite challenges and obstacles, there is simply no denying one’s passions and interests. If you want something strong enough, you’ll find a way to make it possible.
IN THIS ARTICLE
Trap Hunting Competitive Shooting
More
SUBSCRIBE