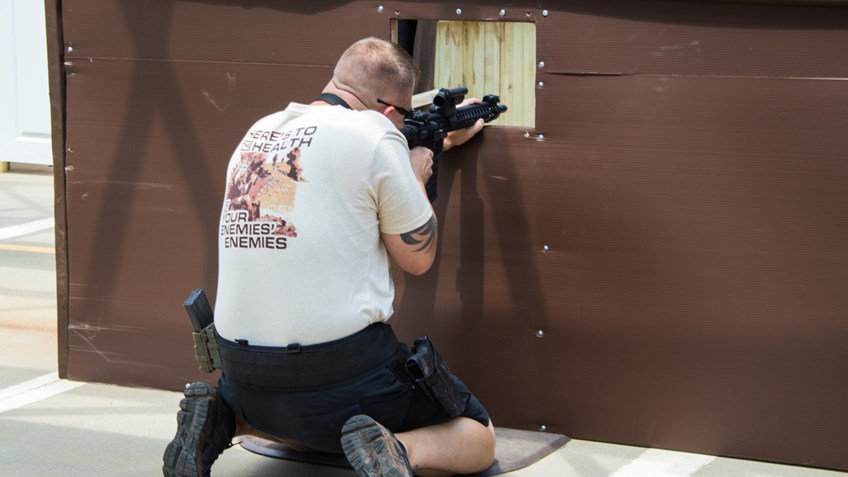 Beneath a merciless midday summer sun, an officer approached the framework of a labyrinth of plywood and concrete, speckled with windows and cutaways amidst its maze of rooms. Taking to the smooth floor of the facility, the man readied his carbine as he lay beside the wooden cutout of a car, and awaited the signal from the match official kneeling to his right.

When prompted, the officer fired beneath the car at a target obscured by the wooden building, quickly clearing a malfunction with his rifle before firing twice more and scrambling from point to point, engaging targets as he weaved through the mock buildings as a scorer trailed closely behind.

This course of fire was among those completed by law enforcement officers participating in the NRA Tactical Police Competition in Chantilly, Virginia, one of several similar events hosted around the country each year designed to put military members and law enforcement officers through the paces of scenarios they may encounter in their daily patrols. 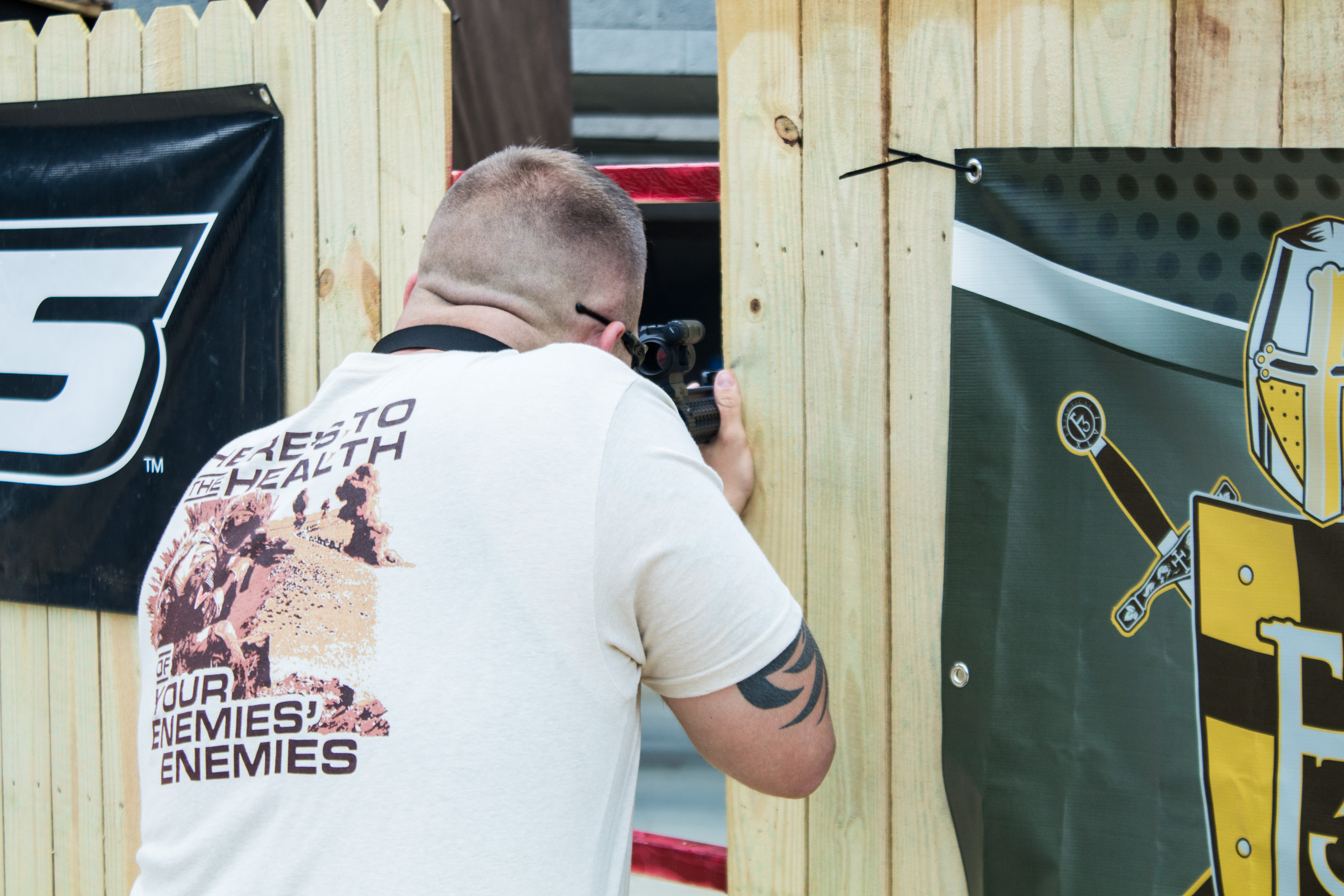 Rather than asking participants to duplicate the qualification courses they accomplish routinely for their departments, the TPC presents realistic situations officers have and will work through, including shooting on the move, off-hand shooting, engaging multiple targets, room clearing and more.

Marc Lipp, the NRA Law Enforcement Division competitions manager, said the TPC was designed to supplement the training officers receive in their respective police academies and departments. Unlike other shooting events, such as 3-Gun matches or pistol competitions, the rules are written to force competitors to work within the confines of what they’d experience on patrol.

"...when it’s all said and done, they’re able to see where they need practice. It’s that practice in those scenarios that could one day be the difference between life and death.”“In our standards, we call for the use of duty gear; we’re very restrictive on bringing competition guns,” Lipp explained. “There’s a place for that and we encourage them to go shoot at those events, but bringing your competition gear here doesn’t help properly evaluate your skill.”

Lipp said most officers who participate in the competition, held throughout the year at several venues across the country, are unprepared for the rigor and challenge the event provides – a good thing, he said, as it forces law enforcement professionals to face the deficiencies in their tactical training and learn how to improve. Shooters are forced to engage targets from uncomfortable or unfamiliar positions, including switching shoulders for patrol rifle scenarios, engaging several targets mixed in with “no-shoot” targets, and relying on their training and demands of the environment to decide when and where to reload, an experience few other shooting competitions, if any, will provide them.

“At first, a lot of officers will grumble about having to endure some potentially uncomfortable courses of fire that they’re not used to, but when it’s all said and done, they’re able to see where they need practice,” Lipp said. “It’s that practice in those scenarios that could one day be the difference between life and death.”

“There’s nobody in a range tower telling them what to do over a PA system, and that’s important, because in real life on duty, you’re making split-second decisions that have to be made,” he added.

Officers often measure their skills based on their department’s qualification protocols. Mostly, it is comparatively easy to qualify, shooting a classic “bottle target,” where any shot within that target is a good hit. NRA’s Law Enforcement Division trainers design courses that are accuracy driven, deprioritizing speed and finesse and putting increased emphasis on repeatability, muscle memory and making decisions under extreme pressure.

“You can’t miss fast enough to win a gunfight,” Lipp said. “You could quickly shoot 40 rounds but if you don’t hit your target it really isn’t doing any good. One effective round, though, can cease that threat and save lives." 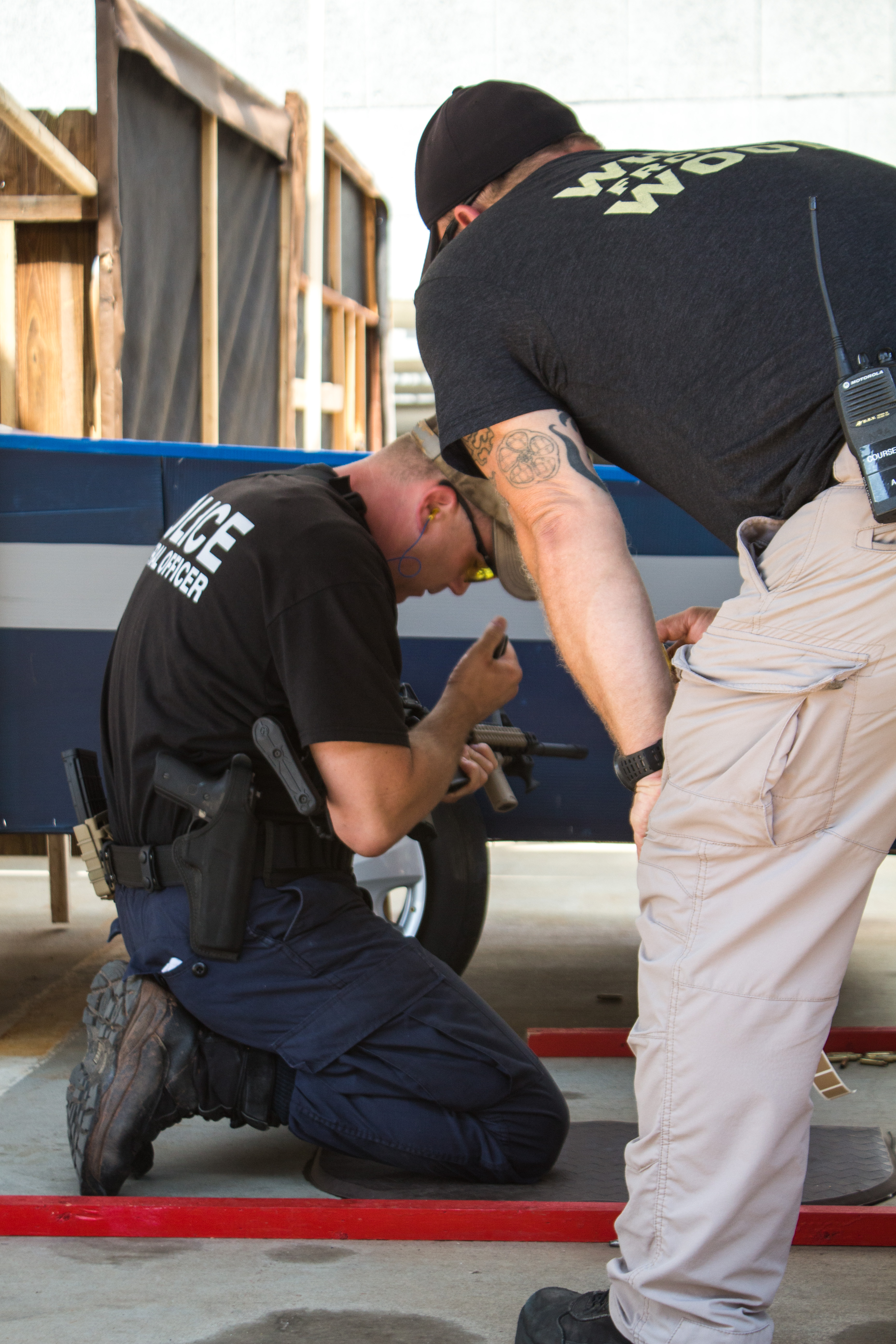 This duty-tailored approach to training isn’t unique to the TPC; it’s a common thread throughout all of the NRA Law Enforcement Division’s programs provided to police and security professionals nationwide. With many departments simply unable to dedicate more time, money and resources into advanced firearms scenario-based training – nearly all of the officers that attend NRA competitions or trainings do so by paying out of their own pocket -- the NRA’s programs fill a much-needed role in preparing officers for the worst.

“Since we can’t be everywhere we want to be, and as a lot of departments and officers are simply unable to get out to all of our events, we make the competitions program material available online as a resource for departments and instructors. The packets have everything needed to build a course of fire, from instructions, list of materials, and printable score sheets,” Lipp explained. “During regular qualifications, we encourage departments to set up a side event that incorporates our program. Because of that, the course materials are provided in editable formats, allowing instructors to custom-tailor portions of the program to fit their training needs or limitations.”

Lt. Ken Billings, the Senior Firearms Instructor with the Dorchester County (S.C.) Sherriff’s Office, brought three junior instructors to the TPC to train because the competitions gives them an experience they are unable to recreate elsewhere in training.

“These programs help them understand the transition from traditional marksmanship that they may get at the academy to learning tactics they would need to be able to survive on the street,” he said. Billings explained how an NRA Law Enforcement competition gives his officers an experience closest to what they may encounter on duty, which provides illuminating perspective and lessons to spread amongst their peers back home.

“It makes my guys think, ‘what can I take out of this and take back to the department,’” Billings continued. “I’m an older gentleman. It used to be ‘toe the line, shoot the target, see you next year.’ It’s not that simple anymore. Our selling point to our young deputies is that this is survival.” 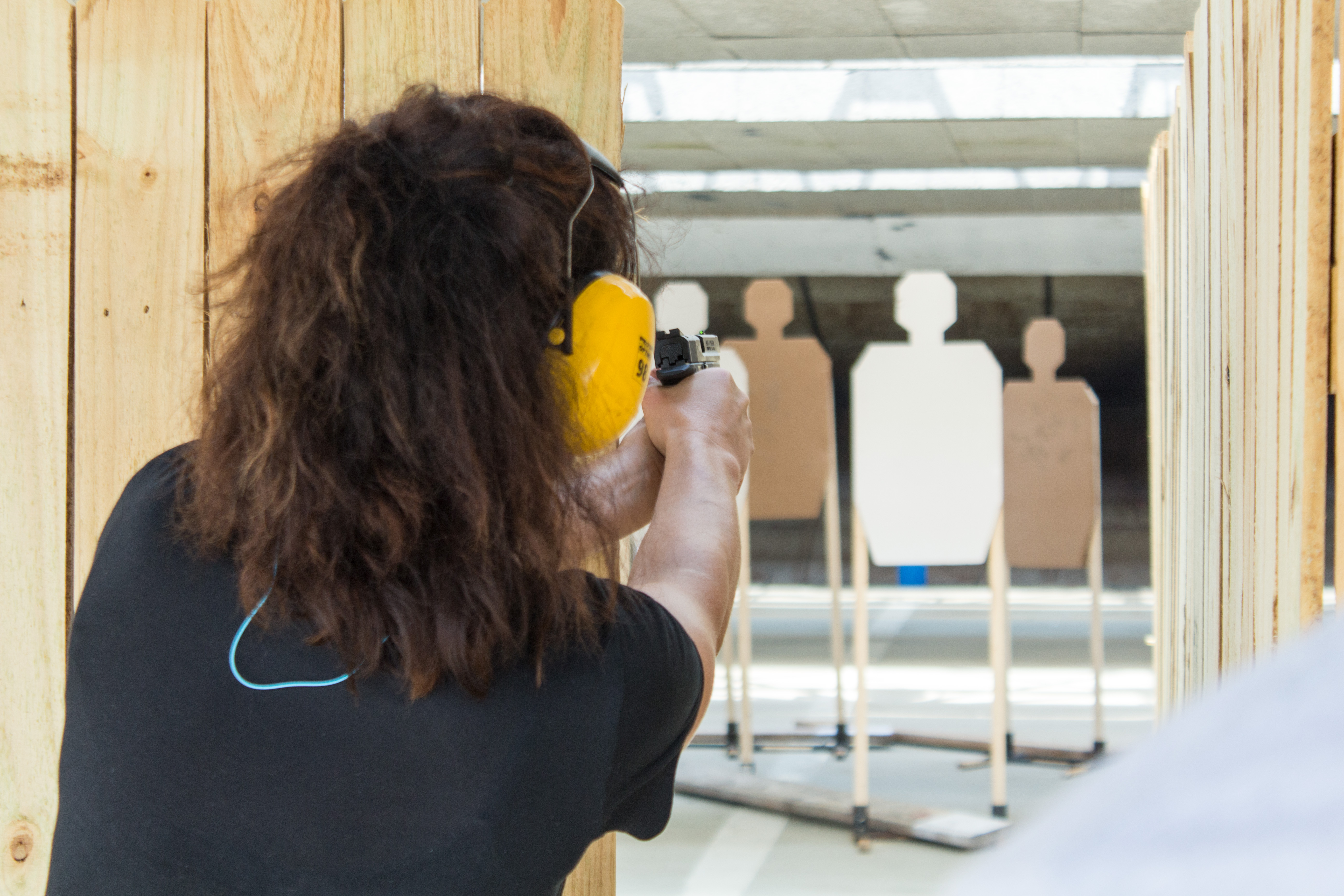 The NRA’s support for law enforcement dates back to World War I. Later, the group formally established the Law Enforcement Division in 1960 to provide the law enforcement community with a means of certifying LEO firearm instructors, and the program has grown since. Lipp said the organization strives to keep the costs of training and competitions as low as possible in order to allow as many people to participate as possible, and that due to the NRA’s national reach, postures them to be able to observe and respond to emerging issues in the police community.

“...we ask, ‘so who’s the benchmark for training you to survive on the street?” Billings offered. “This is who we’re using as our benchmark: the NRA.”“We give the big picture insight into best practices because we know what’s happening across the country, even other countries, and can see trends developing and create or modify training to suit. We’re a one-stop-shop for LE support,” Lipp said. “A department, big or small, can send someone to an NRA Instructor Course, who using what they learn in the course and the program materials we provide, can then return to their department and implement a nationally recognized program without having to reinvent the wheel or suffer the pitfalls of building a program from the ground up because we’ve done that work for them, and they can focus on training their people.”

Lipp said the NRA hopes to continue expanding the competitive and training opportunities for departments across the U.S., demonstrating the key position NRA training fills for law enforcement and encouraging more officers to take advantage of the programs available.

“If they felt they got their money’s worth and benefitted from the experience through support from the NRA membership, whose dues support these programs, we want them to look back, take their program book and look at what they did well, but more importantly, what they didn’t do well at,” Lipp said. “They have to understand that the department can’t do all your training; there’s not enough time in the day. From all the skills LEOs have to know, from handcuffing to defensive tactics, from driving to report writing, they need to get out and train in order to be able to defend their lives and the people they serve, and the NRA stands ready to help them do just that.”

In Billings’ opinion, the NRA continues to accomplish their goal.