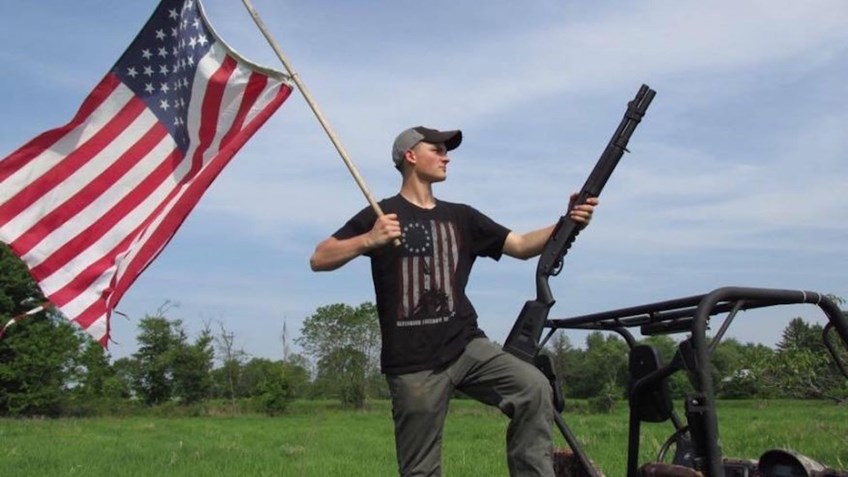 Joshua Bruner, a 15-year-old high school student from Ringoes, New Jersey, made headlines in June when his school, Hunterdon Central Regional High School, refused to accept a photo he submitted of himself for a photography class assignment, wherein students were instructed to provide self-portraits that represent their personality.

In Josh’s now famous photo, the young man is standing proudly awash in sunlight and looking into the distance atop an all-terrain vehicle, holding his Remington 12-gauge shotgun in one hand and the American flag in the other – an encapsulation of Americana.

A Life Member of the NRA, competitive shooter on two state teams and a U.S. Sea Cadet, he thought the photo was the perfect representation of his interests and ideals, and eagerly submitted the project.

According to Josh, the only thing the picture depicts is an unwaveringly proud American, dedicated to one day serving his country, continuing family traditions, and exercising his Constitutional rights. 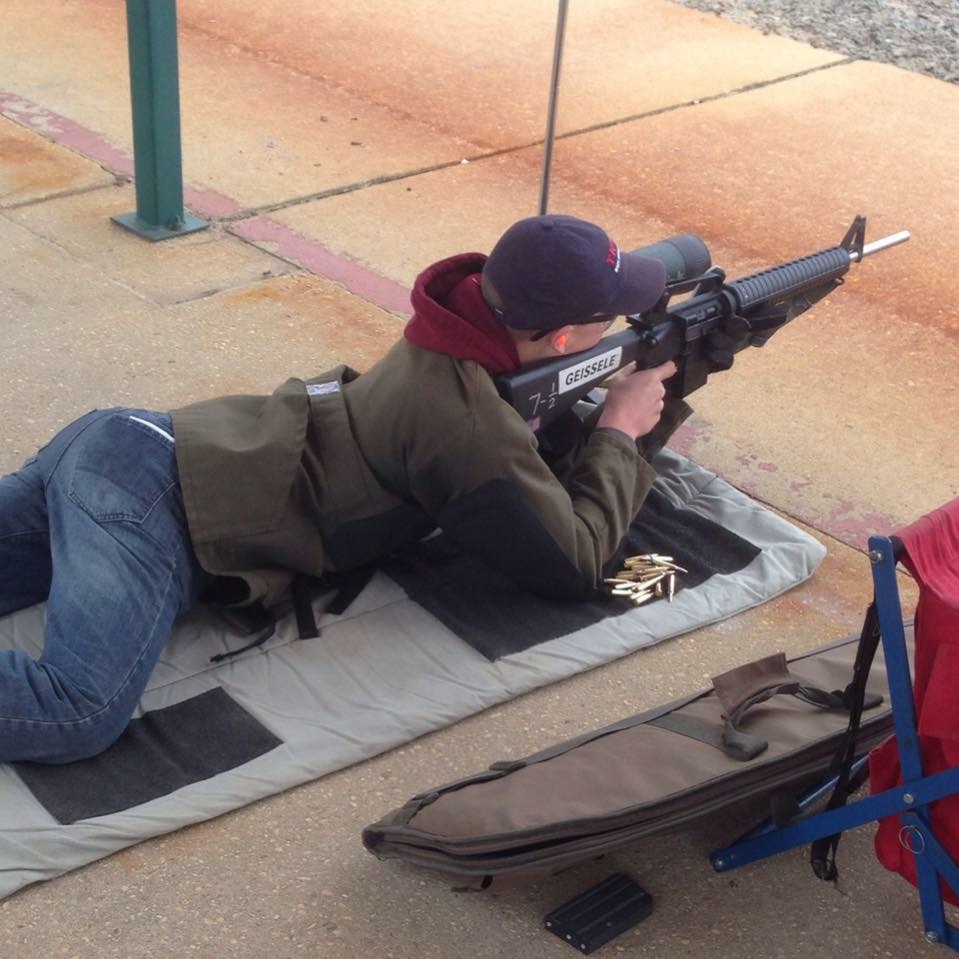 Josh said his passion for shooting is a family affair, crediting his mother, Darcy Meys, and other family members for teaching him the value of the Second Amendment and the responsibility of gun safety. His biological father was a hunter, and his grandfather a U.S. Marine who fought in World War II.

Channeling the warrior ethos of his Marine grandfather, Meys instilled a deep sense of appreciation for military service in Josh and his siblings growing up.

“When we were little, instead of bedtime stories like most kids, she would read us letters and emails that our pen pals sent, so I wasn’t like most boys who [watched] football and baseball and [thought Derek] Jeter was a hero,” Josh said. “My mom would tell us about guys like Chris Kyle, Dakota Meyer and Marcus Lutrell. These were guys she wanted me to grow up and take after.”

Meys and family even “adopted” service members following the terrorist attacks of Sept. 11, 2001, providing a “second home” for more than 500 men and women in the armed forces. Inspired by his family traditions and love of the military, Josh decided he wants to enlist in the U.S. Marine Corps following graduation from high school, just like his grandfather.

“She raised my siblings and me to give back all you can to others, even if it's the last dollar you have, so I feel the need to give back to my country and follow in the footsteps of my great-grandfathers, uncles, cousins and 500 soldiers we have adopted over the last 15 years,” Josh explained.
“My mom would tell us about guys like Chris Kyle, Dakota Meyer and Marcus Lutrell. These were guys she wanted me to grow up and take after.”

In addition to his interest in becoming a Marine, Josh quickly fell in love with hunting and competitive shooting, absorbing as much education and training as possible. The trips to the shooting range with his stepfather Mike inspired Josh to seek training courses, earning his hunter safety certification and applying his developing skills in the field, even brining home the Jersey Trifecta award in his first year as a hunter. 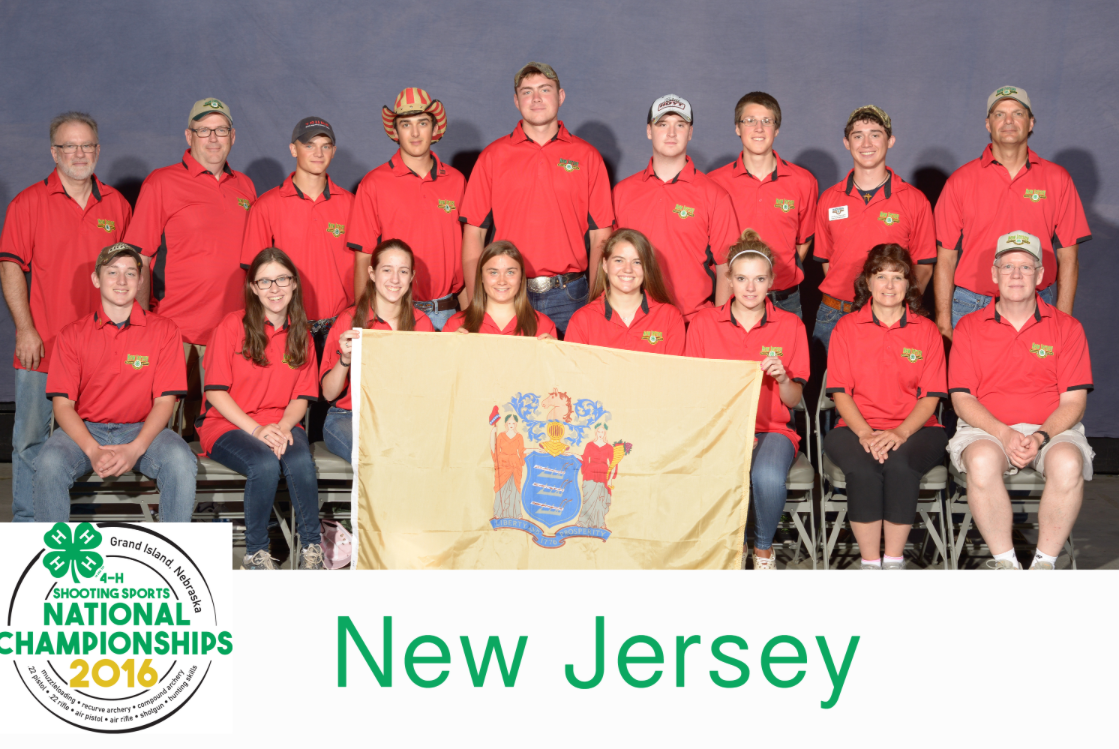 At age 12, Josh joined a local 4H Shooting Club, the Hunterdon Dead Eyes, where he took NRA safety classes and began shooting more often, eventually earning a spot on the senior team and later, the state 4H Shooting Team, travelling across the country to shoot in national competitions.

The shooting community feels like home to Josh, and much like what he gleaned from his mother, the lessons he learns from coaches and mentors leaves lasting impact on his life.

“Our coach for this team, Walt Bachman, is retired [from the] Navy. He has grown sons and spends every weekend at the range training us. We not only learn about shooting, gun safety, gun cleaning and range safety, but Walt teaches us respect for one another, teamwork, and how to deal with life as a gun lover,” Josh said. “He is ‘old-school’ and full of knowledge -- all the older guys at the range are, and they really are a lot of fun to hang out with. You don’t get those life lessons playing football or baseball.”

In shooting, Josh said he’s found his passion, a place where he can truly be himself and enjoy the sport and camaraderie of the community while consistently setting new milestones to achieve. The experience is humbling, and Josh is constantly reminded of the wealth of talent and patriotism that surrounds him.

“Here I am, 15, on a 600-yard range with an AR-15 competing against active duty soldiers, retired veterans, state and local police. You’re handed this rifle, you gear up and you get in position -- you become one with your rifle,” he said. “You feel your heartbeat, and tune out all the noise around you. You are in control, and it is an incredible feeling.

“Then there are the gun friends. My teammates from both teams are an amazing bunch of kids. We have a blast off the line, and it is like a band of brothers and sisters,” he continued. “My coaches from both teams love the sport so much, they make you want to love it more. They make it fun, and we always have a good time.” 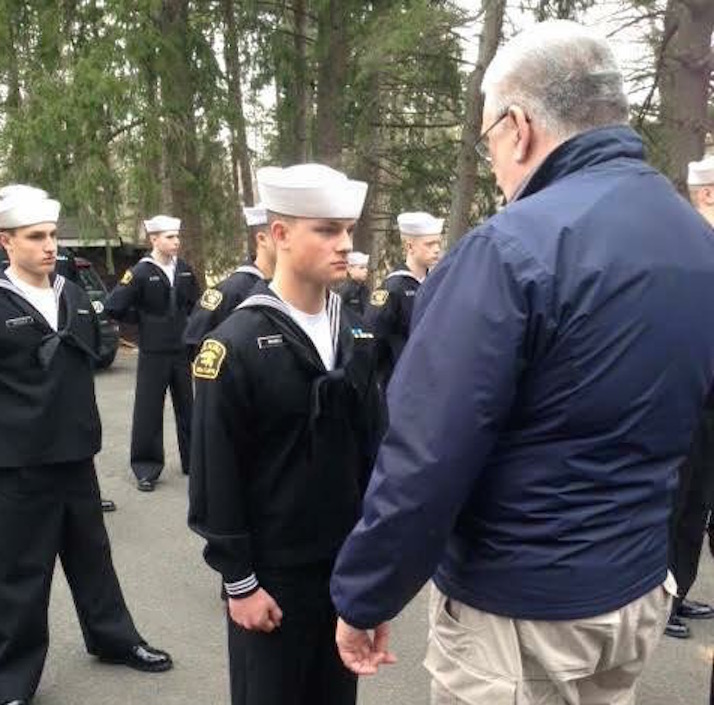 It’s no surprise that when it came time to take a photo that depicted self-expression, Josh would instantly decide to portray his passions: our country, our military, and our Second Amendment.

Unfortunately, the school didn’t buy in to Josh’s vision of his personality, demanding he not submit, then censor the image to fall in line with “politically correct” school standards, making his efforts null and forcing him to recomplete the assignment.

“When I took the photo, I was doing what the assignment said to do: a photo that best represents yourself. If you met me, you would see that photo screams “me!” Josh said. “The more I thought about it, the more upsetting it was because I had an essay for English with a PowerPoint presentation to go with it, and this meant my whole PowerPoint was out as well. If I can’t upload the photos I took, I don’t have [visual aids] for that class, as well.”

Josh and his mom Darcy believe the school’s ruling effectively silenced his creative voice, raising questions about the administration’s treatment of students who subscribe to conservative ideals. Josh points to the policy banning students from even wearing clothing that depicts firearms to school as an example of the school overstepping boundaries on personal freedom of expression.

“I should be allowed to be proud my son is on two state [shooting] teams. This means not only can he shoot, but also that he has discipline, respect and self-control that not many kids have.”He said “95 percent” of his wardrobe is NRA Store merchandise and other firearms and military-themed clothing which he wears to represent his beliefs, and that the school intentionally targets these types of clothing articles as supposedly condoning or glorifying violence, something he said couldn’t be further from the truth.

“I should be allowed to wear these shirts because they represent our troops, my Second Amendment rights, and my sport,” the young shooting sports athlete said, lamenting the idea that he and fellow competitive shooters are forced to hide their participation in the sport due to public pressure, and misplaced fears due to incorrect associations with gun violence.

Meys said much of the blame for the way law-abiding gun owners are misrepresented lies in the hands of American mainstream media.

“Sadly, when people ask me what my kids do and I tell them [they] shoot, they walk away as if I have a gun and I might snap. Why is this? Because the liberal media makes us out to be that way,” she said. “I should be allowed to be proud my son is on two state [shooting] teams. This means not only can he shoot, but also that he has discipline, respect and self-control that not many kids have.”

In the fallout following the school’s decision and the media attention it received, Meys said fellow parents and faculty from the school’s parent/teacher organization even called on her to step down as board president due to her opinions about her son’s freedom of expression, and her steadfast belief in the Second Amendment and responsible gun ownership. Meys said she’s not stepping down, and has no plans to buckle under pressure from political opponents, opting rather to serve as a voice of reason in assuring rule-following students have the right to express themselves.

Not only do mother and son believe schools should rescind the ban on representations of firearms in schools, but that more schools should introduce shooting teams alongside existing sports, and should integrate firearms safety education into school curriculum.

“Schools need to bring back shooting teams, and they need to bring back assemblies on gun safety. Have the Eddie Eagle [GunSafe Program] come to all elementary schools,” Meys said, explaining that education, not ignorance, is the most important element of teaching children gun safety and changing the perception of American gun owners.

He said despite some angry emails and messages he and his mother received following the flurry of news coverage, they were delighted by the responses from service members, patriotic supporters and friends in the firearms industry.

“I got a few nasty emails and my mom got some doozies, but most of the email and comments on Facebook and Todd Starnes’ article were amazing. I got emails from active duty, veterans, moms of soldiers who never made it home, wives of soldiers who are overseas now,” Josh said. “My mom read them all with me, and we answered every one back. We didn't accept gifts, but we were happy to tell our friends about those companies [that reached out to us.] It was awesome they offered some cool stuff, but I just want to be heard, in the hope that maybe I change a few minds on gun control.” 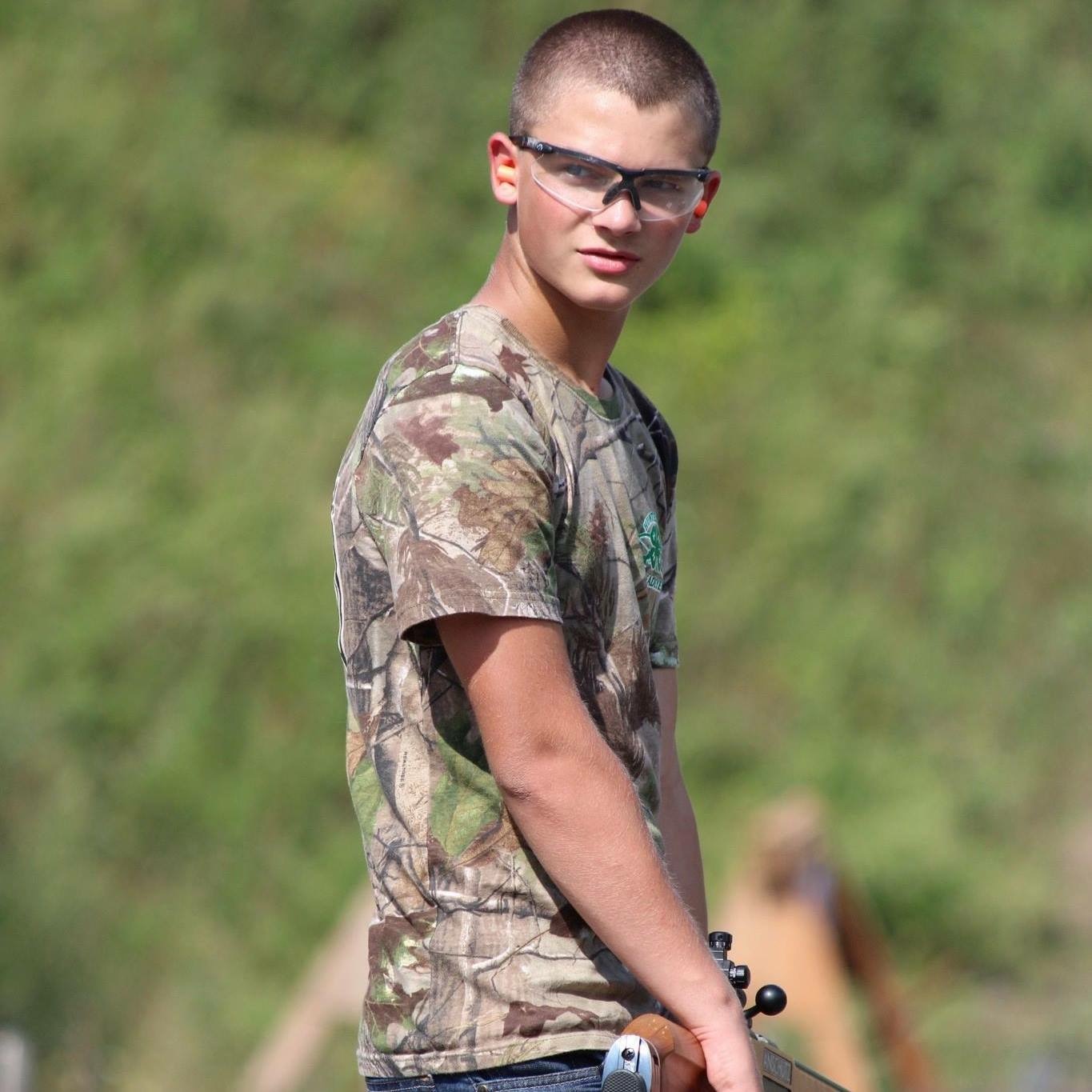 Josh said he has no intention of changing who he is, and will continue to hunt and shoot competitively, wear his beloved shirts and stand up for what he believes in: that America is the greatest nation in the world, a nation made strongest by its people.

“To me, my love for my country [is] the people who care just as much as I do. The people who keep traditions going, farmers who get up at 4 a.m. and work ‘til sundown, factory workers who are proud of the products they make in America, like the guys at Henry [Repeating Arms], making rifles in my mom’s hometown of Bayonne,” he said.
"I just want to be heard, in the hope that maybe I change a few minds on gun control.”
That unwavering love for his country will live on in the iconic photograph, rejected by his school, but embraced by a nation of citizens who stand behind the young shooter and future Marine.

“Josh is willing to stand up to the haters and show kids it is okay to tear up when saluting the flag, because it is not just a piece of cloth waving in the wind. He was taught the flag is waving because of the spirits of the soldiers who crossed over, so you respect that, be it at a ballpark, car dealer, or in school,” Meys said. “You never take that flag for granted, as it has more of a story than any of us will ever leave on this earth.”