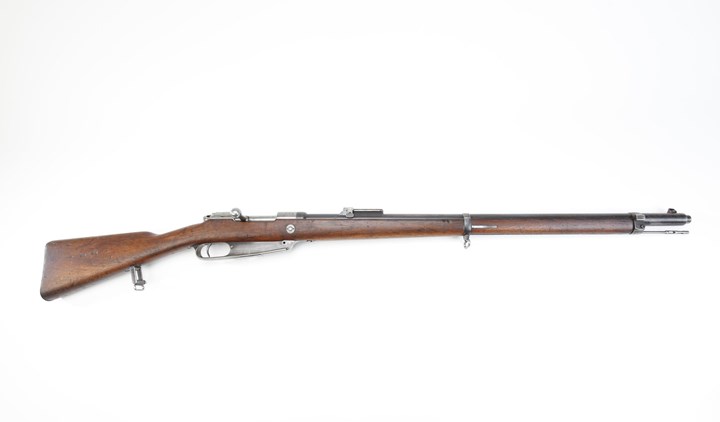 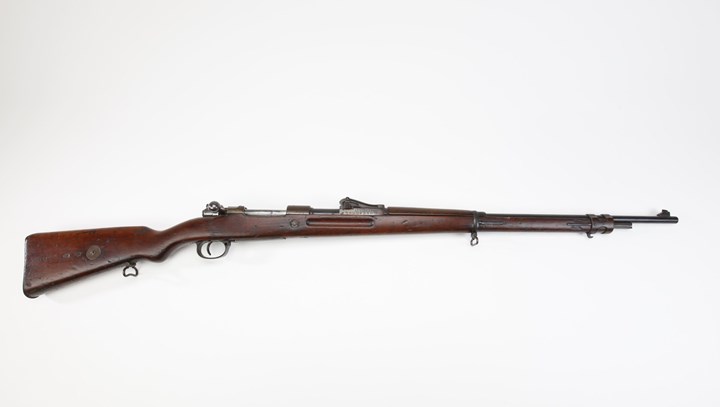 SHOW CAPTION HIDE CAPTION
Learn about this gun at NRA Museums
More
SUBSCRIBE
In this series, A Brief History of Firearms,  Jim dives into several topics including early firearms, advancements in technology, historical impacts, and modern day firearms. In this segment, Jim discusses the advantages of smokeless powder...

Smokeless powder, as the name implies, had the military advantage of not generating a cloud of smoke when fired. Blackpowder smoke would reveal a shooter's position visually and, after a few rounds, develop a haze that could begin to obscure his vision. Another advantage was that smokeless powder produced far less fouling after shots than blackpowder, meaning that more shots could be fired before cleaning, and that powder debris was less likely to clog an action.

Its most important quality, however, was that when ignited, its gases would expand more rapidly, creating higher pressures and driving the bullet to a higher velocity when it left the muzzle. As a bullet approaches 2000 feet per second (about twice the speed of sound), its wounding capacity increases dramatically, allowing a lighter, smaller diameter projectile to have the same "stopping power" as a larger heavier round at a slower speed.

The faster, smaller diameter, bullet will also have further range and a flatter trajectory. A bullet leaving the muzzle of the gun does not fly straight. From the instant it departs the barrel it is "falling" toward the ground due to the effect of gravity. A gun's sights are adjusted so the barrel is actually pointed very slightly up, giving a slight rainbow like curve to the bullet's path. A faster lighter bullet will travel further before gravity pulls it to earth, and a smaller diameter bullet has less wind resistance. The flatter trajectory means it will be on target over a longer distance.

In general terms, the caliber of a bullet refers to a rough measurement of its diameter, expressed either in decimal fractions of an inch or millimeters. For example, a .45 caliber cartridge takes a bullet approximately 45/100" in diameter, which would also be very roughly 11 mm in diameter.

Firearms designers took advantage of the new smokeless powder, using a smaller bullet closer to 1/3" diameter (8mm most popular, but ranging from under 7mm to 9mm). Heavy lead would still be used to form the core of the bullet, but it would be encased in a harder copper or brass metal jacket so it would not quickly foul the rifling in the bore with soft lead that rubbed off at the higher velocities.

The first such bolt action repeating rifle and smokeless smaller caliber ammunition combination to be adopted by a military was the 8mm French Lebel bolt action in 1886.

The pointed "spitzer" bullet design is much more aerodynamically efficient than a round nose design, offering better accuracy at longer ranges. However, when such cartridges are loaded nose to tail in a tube magazine, there is a danger that the pointed nose of one bullet will ignite the primer of the cartridge in front of it when the rifle recoils. Use of a box type magazine, where the cartridges are stacked parallel one on top of the other overcomes this obstacle to spitzer bullets. The British Lee Metford bolt action, generally based on the Mauser concept, in .303 caliber used such a box mag in 1888, and in 1889 Mauser produced its own 8mm box magazine rifle.

Another early box magazine repeater was the Mauser & Mannlicher influenced German 1888 Commission rifle in 8mm, which rapidly became a staple design; while the Austrians adopted a straight-pull bolt action Steyr Mannlicher repeater in 8mm the same year. Mid-bore bolt action box magazine designs rapidly followed, such as the Danish Krag Jorgensen in 1889 (with the US adopting a Krag based design in 1892), and the Swiss straight pull Schmidt Rubin in the same year. The year 1891 saw the adoption of the Lebel pattern Mosin Nagant by Russia, the 6.5 mm Italian Carcano, and the 8mm French Berthier.

During this period, military bolt actions were often modified to incorporate the new advances, and numerous military rifles from the turn of the century or slightly later are bolt action single shots converted to magazine-fed repeaters, or had large bore barrels relined to smaller calibers.

The perfection of the bolt action design is believed by many to be the Mauser 98, introduced in 1898. Improvements include cocking on opening of the bolt rather than closing, an added safety lug, and a larger chamber ring. This basic design became the basis of many, if not all, subsequent bolt action military and sporting rifles, and variations served as primary rifles for many countries through World War II. The tried and true U.S. Model 1903 which served with distinction through two world wars, with its "thirty ought six" (.30-06) chambering is basically a modified Mauser 1898 design. Current production sporting rifles such as the classic Winchester Model 70, and bolt actions by Remington, Ruger and others can trace their lineage to the Gewehr 98.