Gun of the Day: The Thompson Submachine Gun 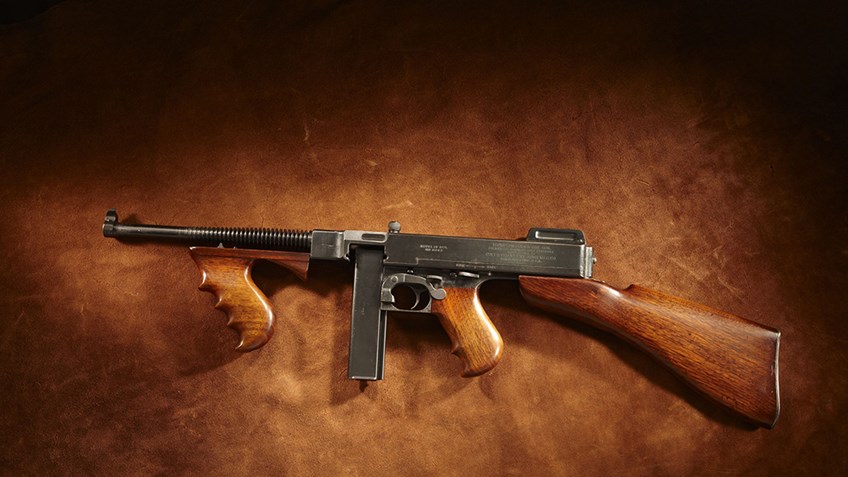 The Thompson was not the first submachine gun ever produced, that distinction goes to the earlier models of the Villar-Perosa and the Bergmann, but the Tommy gun certainly was and still is considered to be the most successful SMG of all time.

It was invented by a man who built his life around weapons. John Thompson, who was placed in charge of a weapons and ammunition depot during the Spanish-American War, was a Chief of Small Arms for the US Ordnance Department and later a design engineer for Remington. He certainly had the background that would allow him to invent such an iconic weapon as the Thompson.

After leaving the Remington Arms Corporation in 1916, Thompson went on to develop his own arms company called the Auto-Ordnance Corporation. A year later the US entered into World War I and Thompson’ s efforts were devoted towards supplying the war effort.

Thompson felt that the modern day belt fed machine guns could be used to great effect, but were limited in their maneuverability, so he endeavored to design and produce what is essentially a “portable machine gun” - a gun that could be operated and aimed by only one man, who could crawl through the trenches with essentially a shoulder mounted machine gun (and 100 rounds ) from location to location. However Thompson and his Auto-Ordnance engineers completed their first model in 1921, so the War had ended by this point, and the Doughboys didn’t have a chance to test out Thompson’s invention in battle.

Instead, the gun was made available to the civilian and Law Enforcement market (this of course being before the National Firearms Act of 1934) and introduced the iconic gun to American pop culture – a phenomenon propagated in part by Hollywood, who portrayed the Thompson as the quintessential “Gangster Gun” of the bootleggers and rum runners of the Prohibition Era.

World War II finally gave the Thompson a chance to prove itself in combat. In The early years of the war, the Navy and Marine Corps bought Thompson models, and then in 1942, a specialized, compact version of the gun was produced en masse to equip the infantry. This model was called the M1, and later the M1A1 and proved to be a valuable supplement to squad combat – The Thompson was a great intermediate weapon, were it didn’t quite have the range of the Springfield 03, the M1 Garand or the BAR – all using the 30 – 06 rifle cartridge, but it held a rapid fire and greater magazine capacity than the standard issue sidearm of the model 1911. This gun was especially useful in the close quarters combat of urban warfare, clearing bunkers and trenches- as the designer had originally intended.

The Thompson was eventually phased out of military service by the advent of the assault rifle, but was still used by law enforcement as late as the 1970s. Today it represents one of the most prolific examples of American ingenuity and design of the 20th century.

However, this Colt Model 1921 Thompson submachine gun is noteworthy for doing nothing.

Purchased brand new by a small police department outside of Milwaukee, Wisconsin, the gun never saw service. Capable of firing 800 rounds per minute, this Thompson had never fired a single shot when the department sold it in the 1960s. The next long-time owner also never shot it. When this Tommy gun came to the Museum in 2005, it was in the exact same condition as it was when Warren G. Harding was President of the United States.