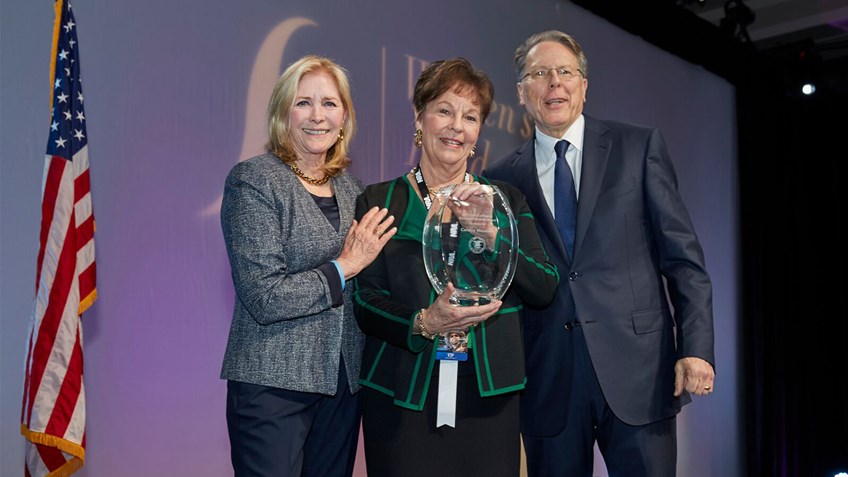 More
SUBSCRIBE
And the winners are.....Carolyn Meadows and Linda Gilbertson!

NRA offers several awards to honor exceptional women dedicated to the preservation of the Second Amendment and the shooting sports through education, advocacy, and volunteerism.

The Sybil Ludington Women’s Freedom Award recognizes women who have demonstrated an extraordinary dedication to preserving the Second Amendment on a national stage and advancing the goals of the NRA through volunteerism and legislative activism.

The Marion P. Hammer Woman of Distinction Award, named after the first woman president of the National Rifle Association, was created in 2004. The award is presented to women who, like Hammer, exemplify activism and influence many in their fight to preserve Second Amendment freedoms.

Receiving the 2015 Sybil Ludington Women’s Freedom Award is Carolyn Meadows of Marietta, Georgia. Carolyn, an active member of the NRA Board of Directors since 2003, is an experienced political leader whose effective lobbying of Congress and Georgia legislators has been felt both locally and nationally. A passionate shooter and hunter, Carolyn also volunteers her time to arrange gun safety courses for children and adults, including the Annual Jet Williams Law Enforcement Shootout and the Lockheed-Martin Gun Club.

Know a woman dedicated to preserving the Second Amendment? Click here to nominate someone next year’s awards! Nominations must be in by November 1st.