T is for Team - Bonner County Women on Target 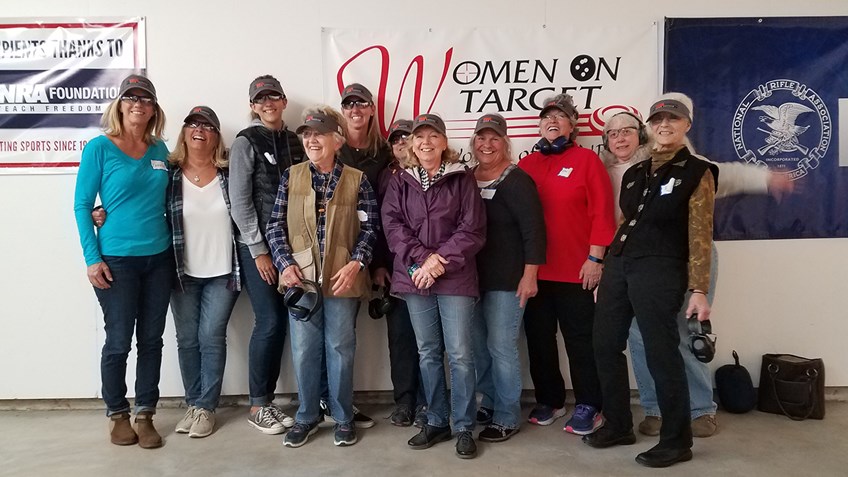 The Bonner County Sportsmen’s Association (BCSA) of Sandpoint, Idaho is one of those “little gun clubs with a big heart.” They not only talk the talk, but they walk the walk when it comes to passing on to future generations the uniquely American tradition of our firearms freedoms and marksmanship. They are the hosts of the Sandpoint JR Rifle Team, and also host a two day “Youth Day at the Range” event every year in June. This event supports local 4-H shooting matches and is heavily invested in the Idaho Department of Fish and Game Hunter Education program. But they still did not feel like they were doing enough!

The cadre of Range Safety Officers (RSO) for the Bonner County Sportsmen have story upon story of husbands who bring their wives up to the range for the first time and try to teach them to shoot. More often than not, it does not go well! The RSOs realized that there are a lot of women in North Idaho that want to learn how to safely handle and shoot a firearm but that they had nowhere to go and the husbands/boyfriends were not getting the job done. The BCSA had several programs directed towards youth shooters but had nothing for the lady shooters. That is when they decided to act. 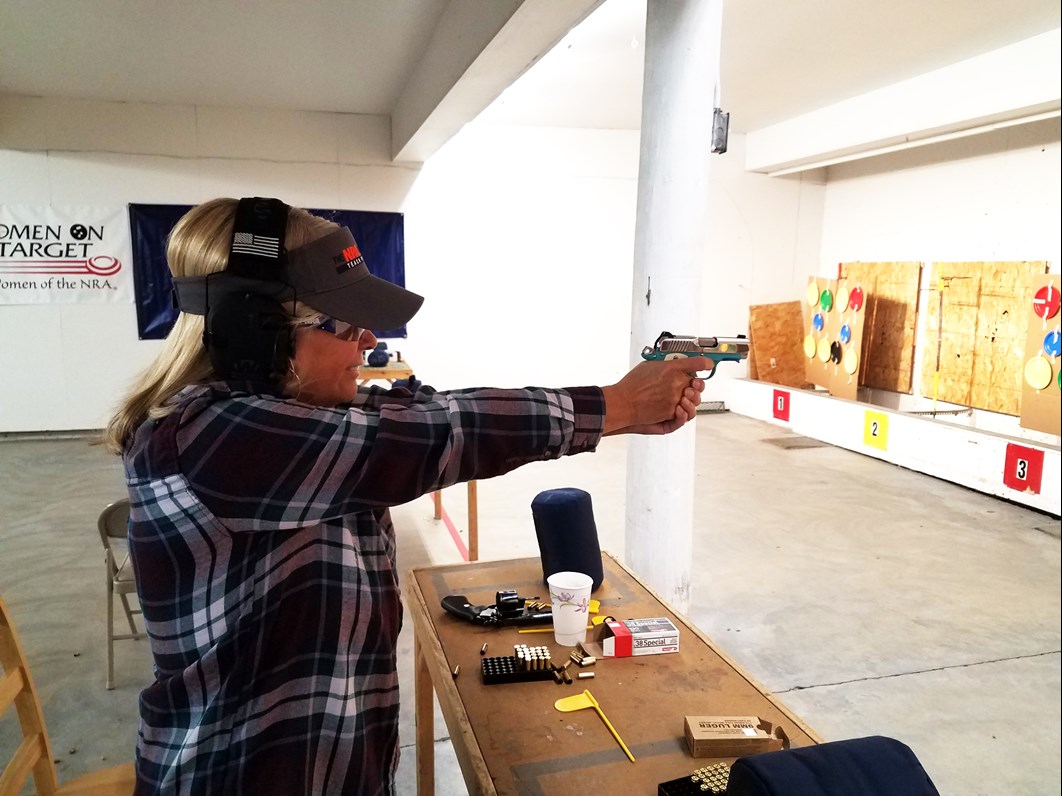 President Bill Moody and Lead Trainer Tom Harvill contacted NRA Field Staff with their dilemma and their desire to come up with something for women who wanted to learn to shoot. They were directed to the NRA Women On Target® (WOT) program which is a one day, ladies only, firearms clinic that focuses mainly on the fundamentals of gun safety and marksmanship. PERFECTION!

Bill and Tom quickly realized that they were going to need help if they wanted to do this right, so they called master organizer Cathie Malison. Cathie is one of those ladies that could’ve organized the Desert Storm invasion and would have finished on time and come in under budget. When Cathie says she will handle something you never have to check back because it is HANDLED! She is also an avid bear and elk hunter, an ID CCW holder and an NRA Life Member. PERFECTION again!

Bill, Tom, and Cathie sat down together to figure out what they wanted to accomplish. They all agreed that the goal would be to offer the best firearms training possible at an affordable cost. To do this, they decided to cap the WOT class size to ten students so that they would have a lot of hands-on instruction and coaching from the RSOs. The BCSA Women on Target team maintains a two student per one RSO/Trainer Coach so that the ladies can get their questions answered quickly.

They also wanted their Women on Target class to be welcoming and inviting from the moment the ladies stepped through the door. Knowing that for many, this would be their first interaction with the NRA and the BCSA, Bill, Tom, and Cathie did not want to miss the opportunity to make a great first impression. Before each WOT Clinic in Sandpoint, the classroom, range, and facility are cleaned top to bottom, all the classroom tables have tablecloths, a dish of candy and teaching aids are placed at each setting, and everything is in place before the students arrive. A catered lunch, snacks, and drinks are all provided for the students. 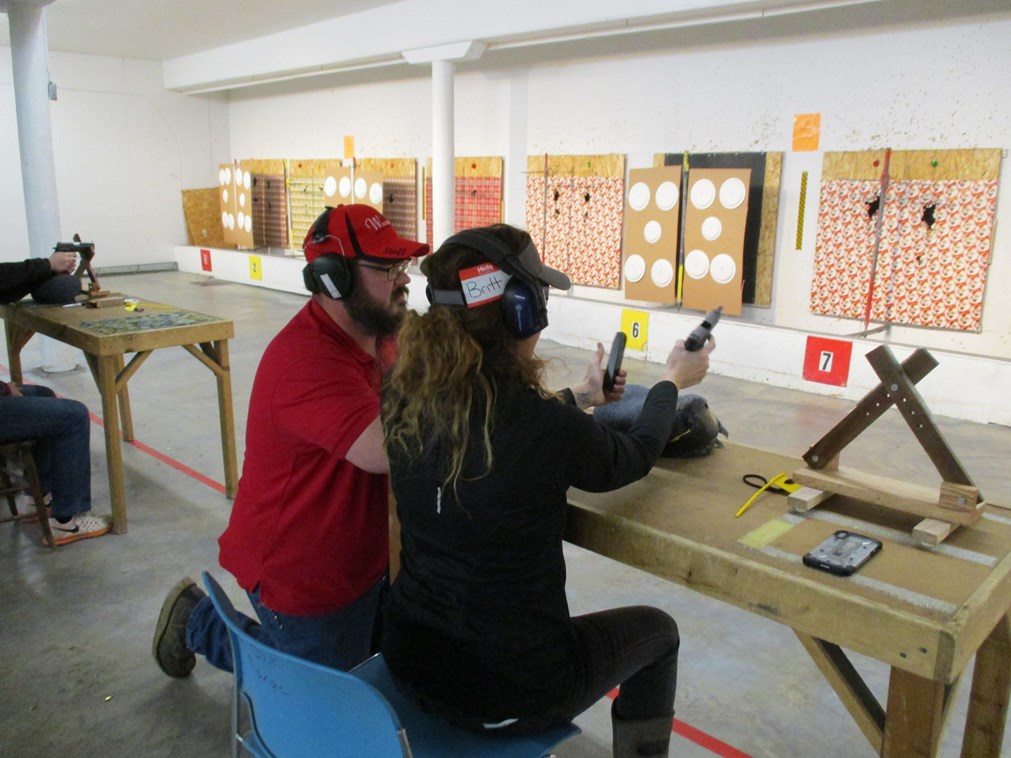 They also wanted to provide the ladies with a chance to shoot several different firearms during the clinic, so each Range Safety Officer brought in their personal handguns in either .22, 9MM or .38 Special. There is everything from Glock, S&W, Kimber, Canik, Taurus, Colt, to Ruger’s, and Sig’s available for the ladies to try once they have shown proficiency in safe gun handling. This is sort of a “try before you buy” for the students, as not all guns fit all hands and the students can see what they like before they go to a gun shop. They also allow attendees to bring their own personal handguns if they would like coaching and instruction with the gun they already own.

The best way to accomplish these lofty goals was to divide and conquer. Bill, Tom, and Cathie did just that: Cathie took over registration, advertising, lunch, snacks, and drinks. Tom took charge of the classroom instruction, the classroom set up and making sure they have enough and a variety of handguns for the students to use, as well as procuring the ammunition. And Bill took over securing the Leo Hadley Indoor Range (BCSA fully donates the use of the Indoor Range to the WOT Team!), recruiting Range Safety Officers and running the shooting portion of the clinic. Bill recruited Gene Gibson, Jim Bonn, Frank Visger, Zeb Platt and Kelly Harliker as Range Safety Officers/Trainer Coaches. The Bonner County Sportsmen’s WOT Team has several centuries of combined firearms training and experience!

With all of their pieces in place, the BCSA WOT Team decided to host their first class in April of 2018. Needless to say with all their pre-planning it was a MAJOR SUCCESS! So much so, that all the ladies in the first class told all of their friends and Cathie started getting calls and emails to see when the next WOT clinic was going to be held. They hosted another one, and the same thing happened! So instead of trying to fight it, the BCSA team decided to host one WOT clinic a month for the foreseeable future! “We must be doing something right because the demand for this clinic is growing,” said Cathie. “The women that attend have been telling family and friends, and we have not had to do much advertising to fill our classes.”

Each clinic starts with over four hours of training in the morning, where the women are taught about the parts of a firearm and how they function, how to safely handle a firearm, as well as how to load and unload several different types of firearms. Then, the ladies get nearly two hours of trigger practice. “They start by loading one round from the sitting position, then multiple rounds from sitting position. Then they shoot from the standing position, again starting with one round and progressing to multiple rounds; they do this with each caliber,” said Tom. “Each class shoots a brick of 22LR, about 500 rounds of 9mm, and 200 rounds of 38 special. They get trigger time!”

“We must be doing something right because the demand for this clinic is growing,” said Cathie. “The women that attend have been telling family and friends, and we have not had to do much advertising to fill our classes.” 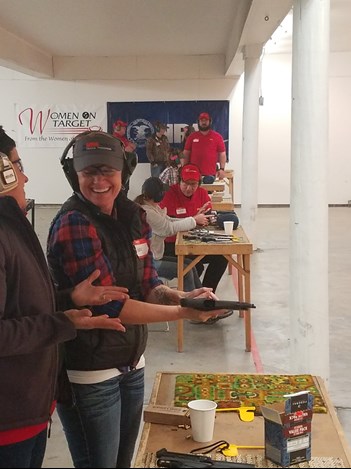 The women that come to the clinics chose to attend for different reasons. Some want to learn how to improve their shooting and handling skills, while others have never touched a firearm and want to learn the basics. “The majority of women say that they attend for personal safety. Knowing the basics about firearms has also been an important reason to take the class. Many women have firearms in the home, as their spouse and/or older children are shooters or hunters. Knowing how to handle a firearm properly should they be exposed to one is a priority,” said Cathie. Others use the clinic as an opportunity to shoot a variety of firearms to find one that fits them well, and that they will be comfortable using. With the Bonner County Sportsmen’s Association donating the use of the indoor range, and a crew of volunteers, the cost per student is only $30! This includes all the instruction, lunch, drinks, snacks, and ammunition.

Offering the opportunity to take a low-cost, all-inclusive class has opened the shooting sports up to the women in their community, who can now learn about firearms and the shooting sports without having to make a huge investment. These clinics are empowering the women in Bonner County to feel safe being around and handling firearms. According to lead trainer Tom Harvill, ”One of my personal goals is for the ladies to be safely handling firearms, hitting the target, and laughing and smiling; we have reached this goal with every class.”