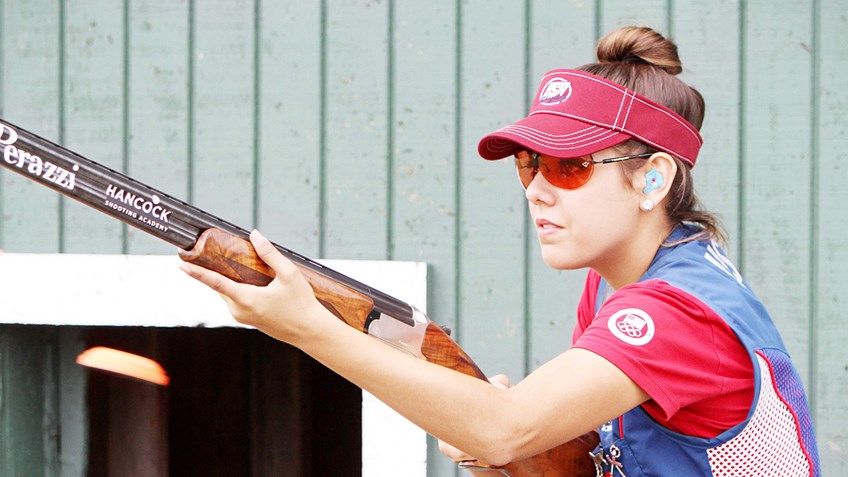 More
SUBSCRIBE
In the July issue of Shooting Sports USA, Barb Baird of Women's Outdoor News sits down with Dania Vizzi, one of the shotgun sport's rising stars. As always, Barb only has one question: What's in your range bag?

Junior International Skeet competitor Dania Vizzi won the World title last year at the World Championships in Granada, Spain. Most people might consider this accomplishment an amazing feat, especially since Vizzi has only been competing for four years. Fresh from her second year at the University of Florida, where she is majoring in accounting, this relatively new-to-the-scene competition shooter already experienced a successful, short first career as a professional ballerina. You could say she went from being on-pointé, to pointing a shotgun.

Vizzi admits, “I am not your average shooter, I was actually born and raised in the city of Tampa. … Because most of my life has been dedicated to ballet, I sometimes feel left out from the shooting crowd. But even though I am different from my teammates, they have made such a positive impact on me, and shooting has changed my life for the better.”

She shoots a Perazzi MX2000, with Winchester ammunition. When she goes to the range, she carries a Nike backpack, because “it is the easiest bag to travel overseas for matches with, and it has many pockets to fit and organize all of my shooting necessities.”

Here’s what she packs in that bag.

When asked to name three words that describe her, Vizzi said, “Positive, passionate, friendly.” She believes that with practice and determination, you can be anything you desire.

When she’s not practicing, of course, as you would expect, she might be dancing. What you might not expect is that she also loves kickboxing and baking.