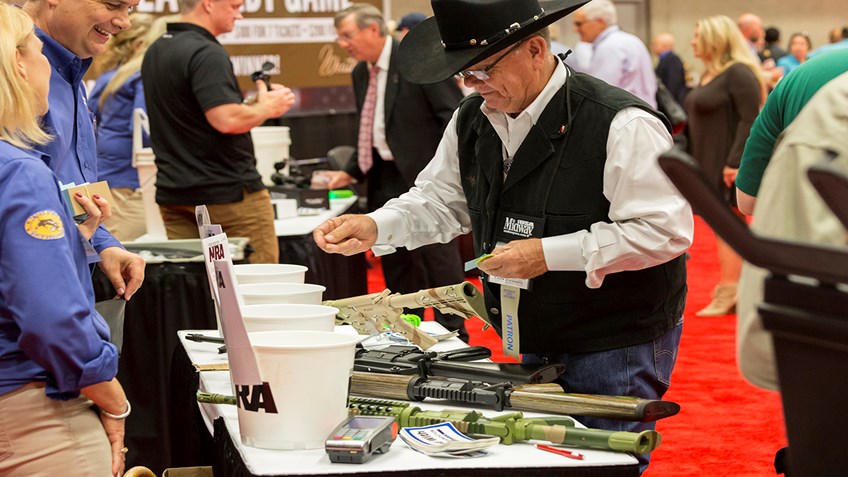 Next week, Indianapolis will host thousands of Second Amendment enthusiasts at the 148th NRA Annual Meetings and Exhibits. On Thursday, April 25, at 5:00 p.m. in Lucas Oil Stadium, the National NRA Foundation BBQ & Auction will kick off the weekend of events in Indy. Join freedom-loving men and women to celebrate the Second Amendment while raising money for the future of shooting sports, starting with a pre-event reception sponsored by SIG SAUER at 4:00 p.m. .

Premier sponsors of the BBQ & Auction include Henry Repeating Arms, Kimber, and Century Arms. Each sponsor will be attending and speaking about their company’s involvement in preserving American shooting traditions and investing in firearms education and training for youth, women, veterans and more.  Their support is critical to the mission of The NRA Foundation, allowing it to continue to “Teach Freedom” as the country’s leading charitable organization in support of the shooting sports.

Attendees of the banquet will have the opportunity to play games sponsored by some of the largest manufacturers in the industry including SIG SAUER, Smith & Wesson, Kimber, Riton Optics, Cordova Outdoors and many others. Guests will also have their chance to bid in the live and silent auctions, which feature one-of-a-kind firearms, merchandise and gear.

Below are only some of the auction items* that will be available for bidding during the event. Tickets to the highly anticipated National NRA Foundation BBQ & Auction are on sale now—click here to get yours today before they sell out, and you can bet on an evening of excitement and Second Amendment support!

The SIG Ultimate Experience Package for two has it all. This package is perfect for a husband and wife, dad and son, brother and sister, or even a pair of friends.

SIG SAUER has graciously donated two SIG MCX Virtus Patrol Rifles in .300 BLK. The Virtus Patrol Rifle was conceived for the demands of the Special Operations Community and is engineered for adaptability.  The 16-inch cold hammer forged barrel is user changeable, and SIG’s proven internal recoil system offers reduced recoil in a compact platform.   Also incorporated into the SIG Virtus Patrol Rifle is a free-floating M-LOK handguard.  Couple that with a Mathclite Duo trigger and you have a recipe for unparalleled accuracy.

In addition to the two Virtus Patrol Rifles, SIG is also including not one but two MCX Virtus Pistols in 5.56!  These SIG pistols come with cold hammer forged barrels in 11.5 inches, a retractable armbrace, free-floating M-LOK handguard, and SIG’s proven internal recoil reduction system.  These firearms are classified as pistols and not short barreled rifles.  Both Virtus Patrol Rifles and Virtus Pistols come in Flat Dark Earth.

The package also includes the BDX (Ballistic Data Xchange) COMBO KIT featuring a SIG SAUER Sierra3BDX 4.5-14x44mm riflescope paired with a KILO1800 BDX to make world’s most advanced laser rangefinder.  The KILO BDX rangefinder will utilize onboard Applied Ballistics Ultralight™ to instantly send your dope to the scope via Bluetooth.  Using your basic ballistic profile, the ballistic solution is calculated for your target and will instantly illuminate on the BDX-R1 Digital Ballistic Reticle with windage and elevation holds in the SIERRA3BDX riflescope.

Lastly, the package includes SIG SAUER Academy Classes for two. The SIG SAUER Academy has provided the highest quality firearms and tactics training available for more than two decades. Located on over 140 acres in Epping, NH–only one hour from Boston, MA.  Package includes two-days of private training with an elite certified instructor, firearm loan and ammunition included. You may elect to bring your own firearm(s). Transportation, lodging, and meals included.

The Fostech Origin Shotguns are known by many shooters as the fastest shotguns in the WORLD! Fostech has generously donated one of their FOSTECH ORIGIN 12 SBV 12 GA semi-auto shotguns to The NRA Foundation.  SBV stands for Short Barreled Variant and is NOT classified as an NFA Firearm. This Fostech Origin 12 Shotgun sports a 9.75-inch barrel, an arm stabilizing brace and forward grip making it the ultimate home defense shotgun. The Origin SBV also features an ambidextrous safety and magazine release, a forward non-reciprocating charging handle, metal flip-up sights, and an infinite gas block adjustment.  The Origin’s in-line detachable magazine configuration allows it to accept five, eight or ten round magazines or the way more fun twenty and thirty round drum magazines.  The receiver and barrel sport a Fostech Hard Black Finish with hard nickel internals.  If you have ever wanted to own one of the fastest and most reliable shotguns in the world all in a very portable package, this FOSTECH Origin 12 SBV is for you! 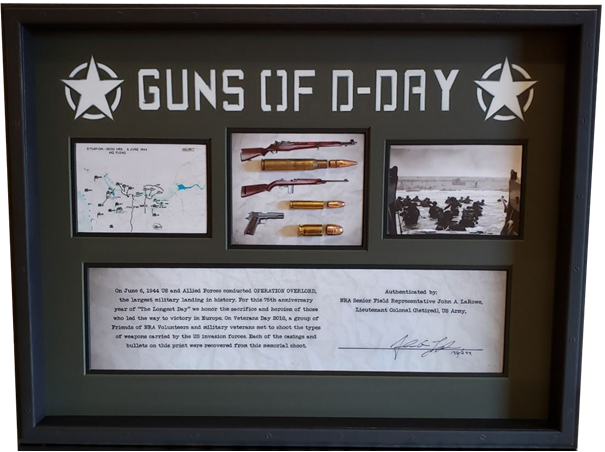 June 6, 2019, marks the 75th anniversary of D-Day when in 1944 U.S. and Allied Forces conducted OPERATION OVERLORD, the largest military landing in history. To honor the sacrifice and heroism of those who led the way to victory in Europe, on Veterans Day 2018, a group of Friends of NRA volunteers and military veterans met to shoot the types of weapons those brave Americans carried in battle. These included M1 Garands in .30-06, M1 carbines in .30 carbine, and M1911s in .45ACP. Each of the casings and bullets on this print were recovered from this memorial shoot. Featured on the left side is a depiction of the map presented to Gen­eral Eisenhower at the end of D-Day when victory was still uncertain. On the right a view from the bay of a Landing Craft, Vehicle, Personnel (LCVP) showing these Soldiers’ first view of the Normandy beaches that morning. This individually numbered limited edition print is number 1 of 244 prints and is exclusive to Friends of NRA events. 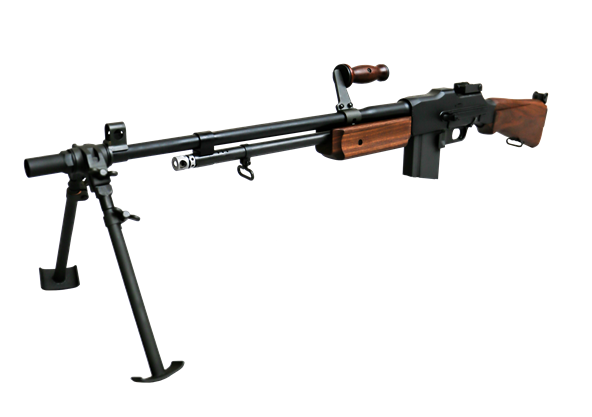 The Browning Automatic Rifle (BAR) model 1918 was developed by John M. Browning in 1917.  Marlin-Rockwell Corporation, Colt, and Winchester made 85,000 rifles during WWII to meet the US military requirement.  Ohio Ordnance Works, Inc. manufactured a patented semi-automatic version of this rifle, the 1918A3-SLR (WWII Version).  The only one of its kind in production anywhere in the world.

For the last 22 years, Ohio Ordnance Works, Inc. has taken great care in the building of each rifle.  Only the highest quality Ohio Ordnance parts are used in production.  The heart of the 1918A3 is the receiver made from 4140 solid billet that has been induction heat treated.  The billets are machined on state of the art, CNC machining centers.  Every rifle is fully assembled, inspected, test fired, and re-inspected under the direct supervision of the master armorer.

The entire manufacturing process is accomplished at the Ohio Ordnance Works, Inc facility in Chardon, Ohio.  Their team is made up of experts in the military ordnance field, with a combined 100 plus years' experience in the trade.

If you’re a target shooter, a hunter or a collector, this limited edition (only 1,000 made) lever-action rifle is for you! Designed to perform in the field without sacrificing aesthetics, the Henry has the looks and performance to match. This beautifully finished rifle features a polished and engraved brass receiver and an attractive 24.5-inch blued steel octagonal barrel equipped with a folding ladder rear sight and a blade front sight, ensuring a good sight picture. What really sets this limited edition beauty apart from other mere lever-action rifles is that it features an engraving design that was inspired by an early Henry rifle that was engraved in the style of the legendary Samuel J. Hoggson in or around 1862. This style was chosen for this edition by the CEO of Baron Technologies, Inc. (BTI), David Baron, and the pattern is expertly executed by master engraver Rob Bunting (of BTI), with assistance from engraver Seth Karlak and artist Catarina Pech. The classic American scroll pattern is cut, not molded, and hand chased. Topping off this limited edition classic is a fancy American walnut stock with a brass buttplate. This rifle will become an instant family heirloom as soon as you walk through your door. 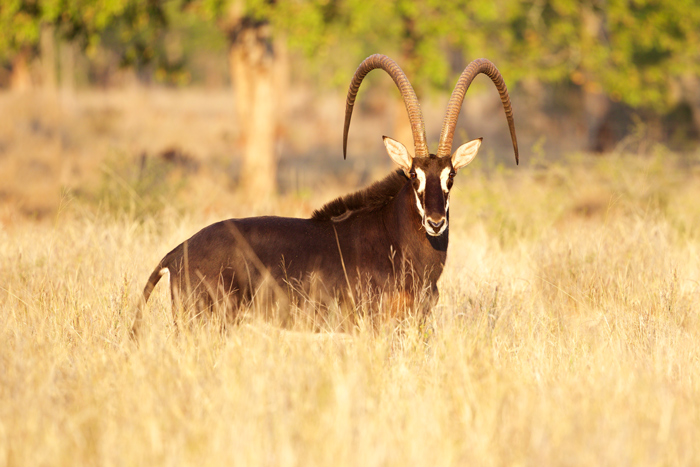 With more than 400,000 acres, Numzaan Safaris is one of the leading outfitters in South Africa. Numzaan has an absolute commitment to quality and offers exceptional trophies and service in a picture perfect setting. Enjoy this seven-day sable hunt for two at a family-run operation that has exceptional love and passion for nature, conservation, and hunting. This guided hunt is guaranteed to make you want to come back for more! INCLUDED: Lodging, Pick Up and Return to Airport, Meals, Beverages, Laundry, Hunting License Fees, Hunting Vehicle with Driver/Guide, Licensed Professional Hunter, Trophy Fees, Trophy Preparations, Field Preparations, Transportation of Trophies to Taxidermy and Forwarding Agent. NOT INCLUDED: Airfare, Firearm/Weapon Import Permit Fees, Firearm Rental, Ammunition Fees, Taxidermy, Shipping of Trophies, Import/Export Fees for Trophies, Gratuities to Staff.

If you are going to travel halfway around the world to go on a hunt that others can only read about you, want to make sure you are carrying the right rifle!  That is why Nosler donated one of their iconic M48 Heritage Rifles chambered in 325 WSM.  The Model 48 Heritage combines classic styling with modern engineering and top of the line components, for a rifle that is as beautiful as it is functional. The fancy-grade, oiled walnut stock has been carefully designed for a seamless fit between the shooter and rifle. With a delicate palm-swell, slender forearm, and shadow-line cheek-piece, the Model 48 Heritage just feels right. A handsome, Heritage matte-black Cerakote® all-weather finish compliments the dark wood grain, while fully protecting the metal-work from the elements. The Model 48 Heritage is for the shooter who desires all of the features expected in a contemporary hunting rifle, but with all of the tradition and warmth of a wood-stocked rifle.  When you go on the hunt of a lifetime, you do not want to leave anything to chance, and you won’t with this Nosler M48 in your hands! 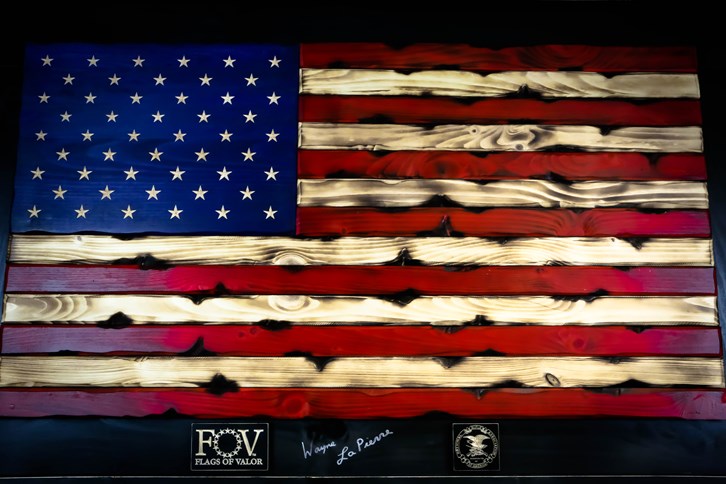 Flags of Valor is all about service – past, present, and future. This veteran-owned and operated business is dedicated to remembering, employing and empowering our heroes. This framed, rustic wooden American flag is a tribute to the families whose service so often goes unseen. To the wives, husbands, parents, children, and entire communities who en­dure while their loved ones wear our uniform on foreign soil, we remember and honor you. Respect their bravery and strength with this framed American flag art. This beautiful piece is signed by NRA Executive Vice President, Wayne LaPierre and will make a striking display in your home or office.   Measures 53 1/2" wide x 31 1/2" tall.

NRA Annual Meetings is April 25-28 in Indianapolis, Indiana. Join The NRA Foundation in the Nation’s fastest state! Buy your tickets for the National NRA Foundation BBQ & Auction at www.friendsofnra.org/nationalevents.

*All items are subject to change