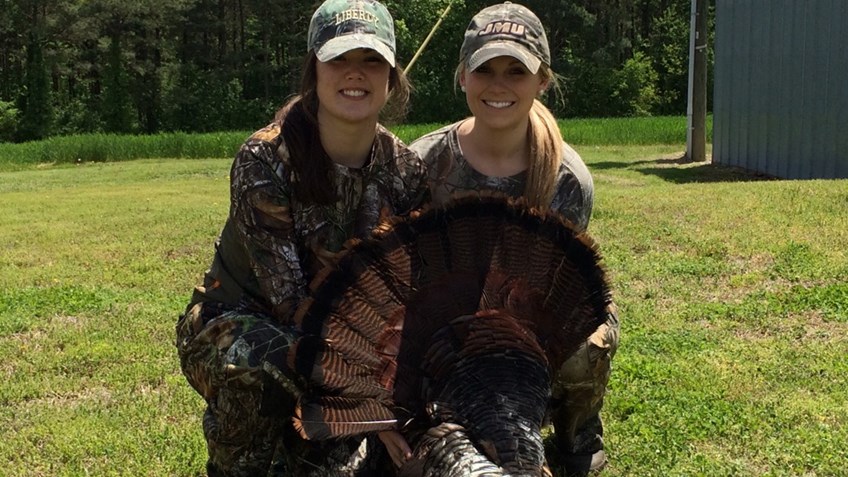 More
SUBSCRIBE
It is quiet. There is pale yellow light peeking through the trees as the sun begins to rise. I’m dressed in camo, head to toe, hoping to blend in with the huge pile of brush and logs. I can hear all the sounds, even the faintest of them: birds singing,  crickets chirping, the woods waking
up around me. But the sounds of nature are interrupted when I hear David start calling for turkeys, and I begin to get nervous.

Sure, I’ve gone shooting plenty of times…all kinds of guns actually, and I definitely wasn’t a stranger to this shotgun. But hunting was a whole different ballgame. David stops calling and it’s dead silent. I’m waiting… just waiting…and then I hear it. One gobble, then two, then I don’t know how many but now this tom won’t shut up! All of a sudden, it feels like my heart is going to beat out of my chest and I start look around frantically. I’m anxious to say the least. I never thought a simple turkey gobble would get my adrenaline pumping this much. Where is he? He sounds like he’s right on top of us!

I wonder if Melissa and David can see him. They are posted up a couple hundred yards from Mike and I at a different clearing. Then the gobbles stop and I feel a wave of disappointment. How could he be gone that quickly?! He sounded like he was right next to us!

At that moment, a familiar sound fills my ears but I still jump. It took a second for me to realize Melissa had taken a shot. I see David sprinting out into the field, nearly falling over the brush (something I would be sure to tease him about later). He lets out a cheer and Melissa follows. I sling my shotgun over my shoulder and we join them in the field. Melissa has bagged her first turkey and he was a decent 20lb tom!

After dropping Melissa’s bird off at the house, I am back in the woods, sitting in a pile of leaves and sticks, with my back against an old tree. David begins calling and no more than two minutes later, he gets a response. Yes! Now it’s my turn! As the gobbles get closer, I spy a hen making her way through the open field I’m facing. This couldn’t be more perfect. The tom will see her and make his way straight in front of me!

…Only he doesn’t. The gobbles stop and frustration sets in. David and I move to a different clearing and once again, we hear a bird within range only to disappear in the opposite direction. At this point, David is more annoyed than I am. “That’s it. Let’s go!”, he says in a not so quite whisper. David takes off away from the edge of the clearing deep into the woods. I follow, hoping that he’s on to something. We pause and he begins calling for a final time as it’s almost noon. Gobbles answer him and my adrenaline starts pumping again. This tom is close. So close I’m shocked I cannot see him. I press the shotgun into my shoulder and click the safety off. This is it. I’m about to bag my first turkey! And just like that… The clock strikes 12 and the gobbles stop.

I wish I could have continued the story with an epic chase through the woods ending my first turkey hunt. Unfortunately, I wasn’t that lucky. But, I’ve learned that’s just the way the hunt goes sometimes.

Even though I didn’t get to use a tag, my first hunt is one I’ll never forget. It was exciting and nerve racking all at the same time. I learned not only how to hunt but how to hunt responsibly and ethically. I learned that patience is key and all you can do sometimes is wait. I learned that hunting isn’t only a sport, but incredible time to be alone with nature and appreciate the beauty of the world around you.

I have to ask my fellow hunters who are reading this to make me a promise. Pass along this great American tradition to your children, friends, and neighbors; those young and old; experienced shooters and beginners. Share your passion and your wisdom. Share your techniques, skills, and lessons. Hunting isn’t about the trophy. It’s the experience, the connection with nature, the understanding that the animal you’ve take serves a purpose and should be respected.

Take someone on their first hunt. I promise you, it will be an experience they'll remember for the rest of their life.

Now that you have turkey hunting stuck on the brain, we've got the perfect solution - catch NRA All Access featuring some seasoned hunters, Jessie Duff, Julie Golob and Josh Carney as they go turkey hunting!

All new Wednesday 7:00pm ET only on the Outdoor Channel!