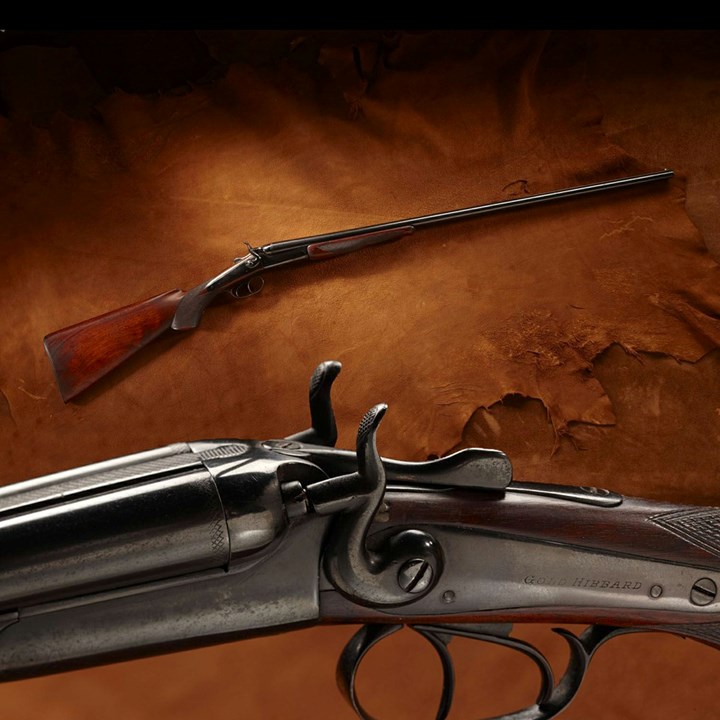 SHOW CAPTION HIDE CAPTION
Manufactured in Chicago, Gold Hibbard was the trade brand name used by Hibbard, Spencer & Bartlett on their general market line of imported shotguns. This shotgun was reputedly given by Annie Oakley to Mary Estell Beavers, a close friend during a shooting exhibition in Oklahoma. 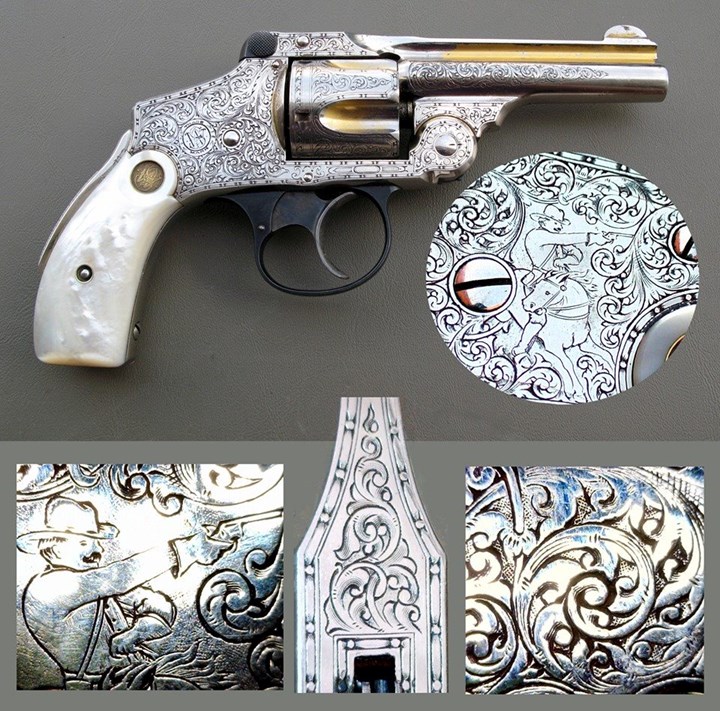 SHOW CAPTION HIDE CAPTION
This Smith & Wesson “Lemon Squeezer” is engraved with an image of Theodore Roosevelt as a mounted Rough Rider and features pearl grips. Roosevelt reportedly gifted it to a man from a prominent family related to Spanish royalty while on expedition in South America. 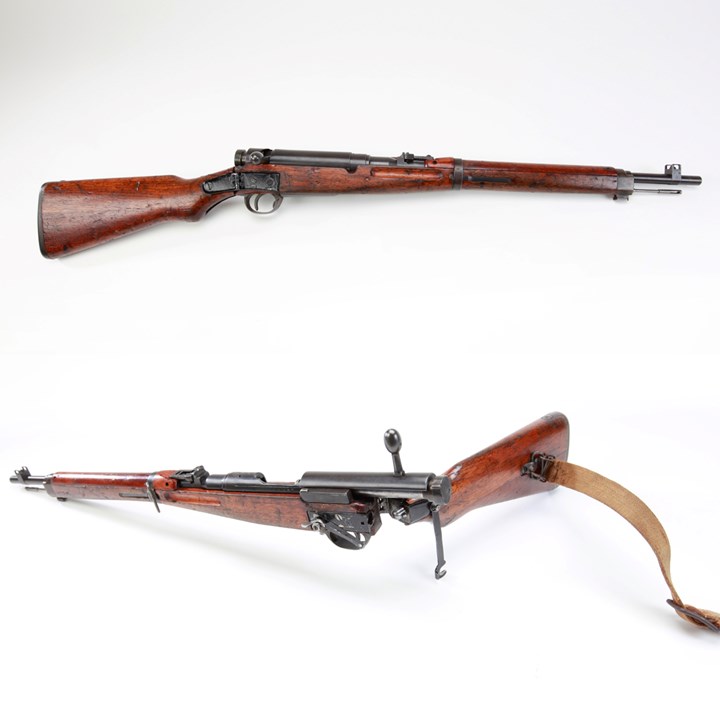 SHOW CAPTION HIDE CAPTION
The NRA Museums staff often wishes they could fold up their collection of firearms to save space, but here's one rifle that actually does. This early Japanese Type 1 Paratrooper rifle has a hinged section at the wrist that seems to have had some strength issues develop during WWII. Later 6.5mm paratrooper rifles were takedown models that separated into two sections in front of the action. 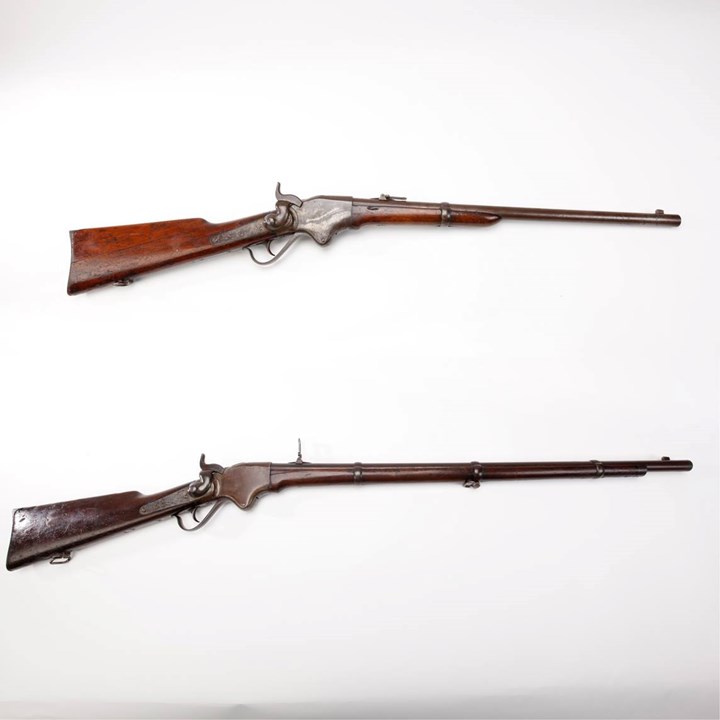 SHOW CAPTION HIDE CAPTION
Which came first – the chicken or the egg? Or perhaps in this case, was it the Spencer carbine or the Spencer rifle?

While there is a Civil War legend about President Lincoln approving the Spencer for service after receiving a personal demonstration from inventor Christopher Spencer, that affair took place in August of 1863, a month after hundreds of Union cavalry had deployed with the rifles at Gettysburg. Although the shorter Spencer carbine was eventually produced in far greater numbers than the rifle version, the Spencer rifle was the gun issued first to Federal forces in quantity. 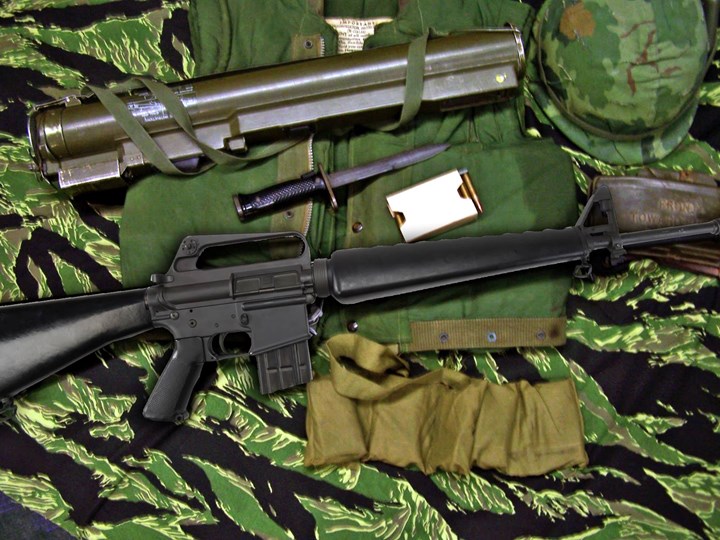 SHOW CAPTION HIDE CAPTION
Southeast Asia and the Vietnam conflict saw a generation of Americans exposed to a new rifle, the M16. This early selective-fire AR-15, one of the first of the Armalite design ordered by the US Air Force and US Army and issued in the tropics, had a hard-chromed bolt carrier and a distinctive “waffle” pattern magazine. In the humid jungle environment, its lack of a compartment for cleaning equipment was quickly noted. 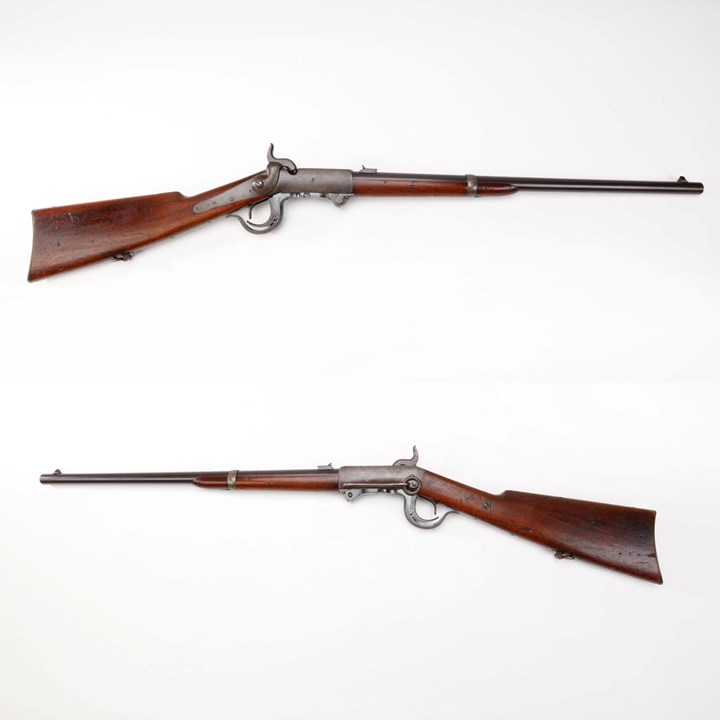 SHOW CAPTION HIDE CAPTION
One of the most innovative breechloaders used during the Civil War, the Burnside Carbine was the invention of the NRA’s first president, Major General Ambrose Everett Burnside. Burnside not only developed his unique namesake single-shot, breechloading percussion rifle, but also its equally distinctive, cone-shaped brass cartridge that inserted – tapered base first – into a correspondingly shaped breechblock. While production started off slow, by 1864 more than 40,000 .54 caliber carbines had been manufactured and issued to many cavalry regiments throughout the war. 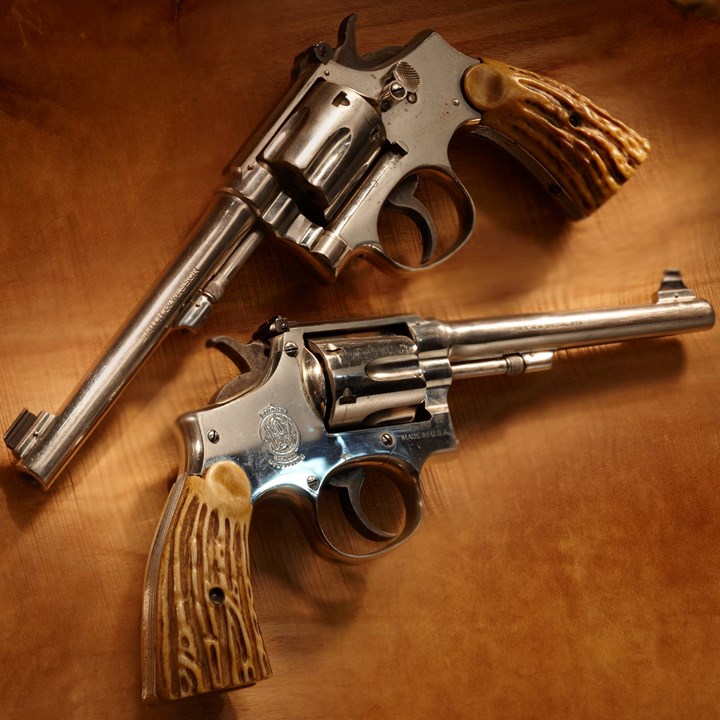 SHOW CAPTION HIDE CAPTION
Herb Parsons was very well known as an exhibition shooter for Winchester and excelled with any model of rifle, pistol, or shotgun. Above are his treasured pair of plated Smith & Wesson Revolvers – one in .22 and the other is chambered for .38.
More
SUBSCRIBE
Are you a fan of history and firearms? If you're on this website, you've probably already heard of at least one of NRA Museums breathtaking locations. Their collection of firearms is one of the finest in the world - likely the finest - and features thousands of historic firearms that both paint the picture of United States history and tell their individual stories.

The NRA Museums Facebook page highlights one of their great pieces everyday and we've compiled this past week's in one handy place.

Learn more about the NRA National Firearms Museum, NRA National Sporting Arms Museum at BassPro, and the Frank Brownell Museum of the Southwest, at www.nramuseums.com.
IN THIS ARTICLE
NRA Museums Guns of the Week
More
SUBSCRIBE