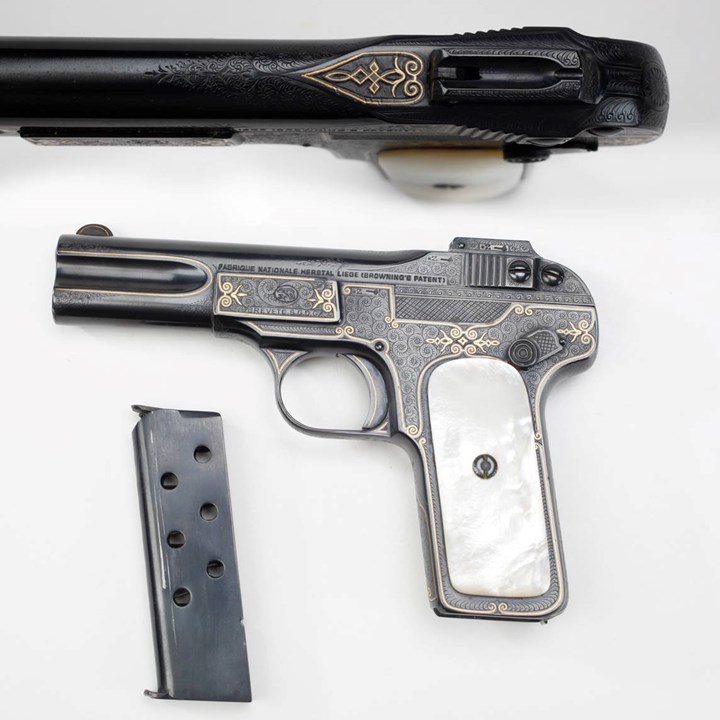 SHOW CAPTION HIDE CAPTION
Tradition holds that this factory engraved semi-automatic pistol with mother-of-pearl grip panels was one that Theodore Roosevelt used as a nightstand gun in the White House during his years as President. 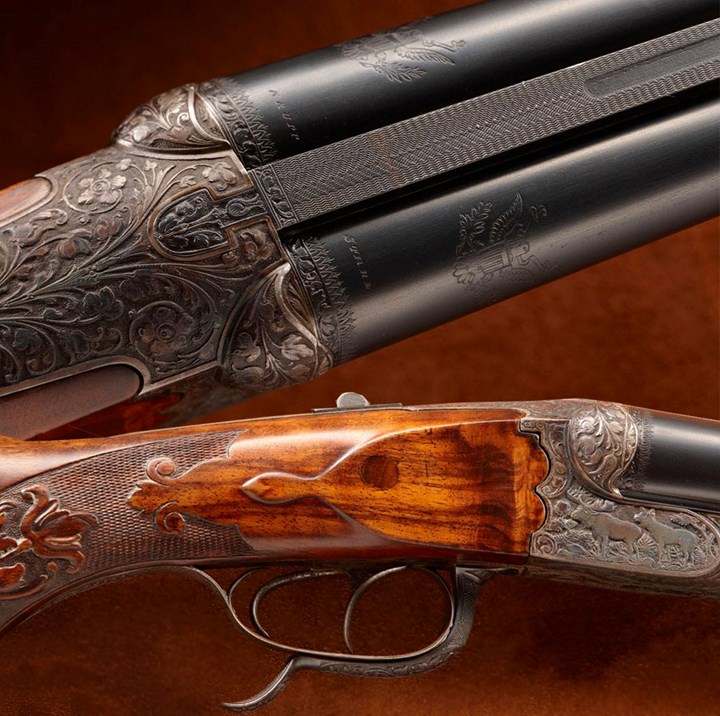 SHOW CAPTION HIDE CAPTION
This is the prized double rifle of NRA Life member, avid hunter, and former President Theodore Roosevelt. Custom made by European-trained gunsmith Fred Adolph, this .450/500 Adolph double rifle bears the Presidential seal on both barrels and was used by Roosevelt on western hunting excursions. Roosevelt eventually gifted the rifle to a hunting guide, and it was subsequently presented to the NRA. 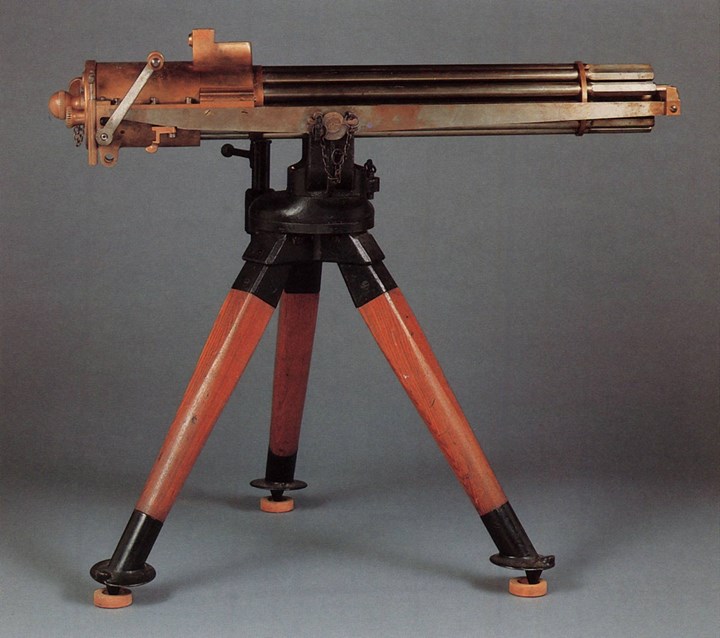 SHOW CAPTION HIDE CAPTION
This Colt Model 1895 gatling gun is one of four from Lt. John Henry Parker’s detachment used in support of Roosevelt's Rough Riders at the battle of San Juan Hill and Kettle Hill on July 1, 1898. During the battle, some of Roosevelt’s men confused the sound of the gatlings with Spanish machine guns to which Roosevelt leapt up and yelled, “It’s the Gatlings, men! Our Gatlings!” Originally chambered for .30-40 Krag, the gun was later converted to .30-06 in 1907. 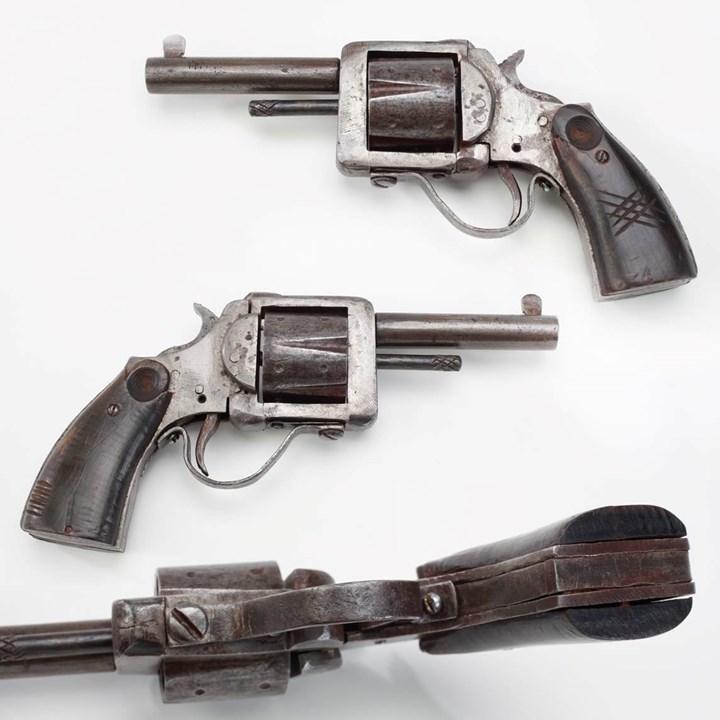 SHOW CAPTION HIDE CAPTION
This pistol embodies the phrase, “where there’s a will, there’s a way.” During WWII, Philippine resistance fighters found themselves with a shortage of weapons to use against Japanese occupation forces and resorted to arms like this primitive built-by-hand revolver. Chambered in .38 S&W and manually operated, it was built in the mountains of Mindanao using only a 12-inch rough cut file and a breast drill. 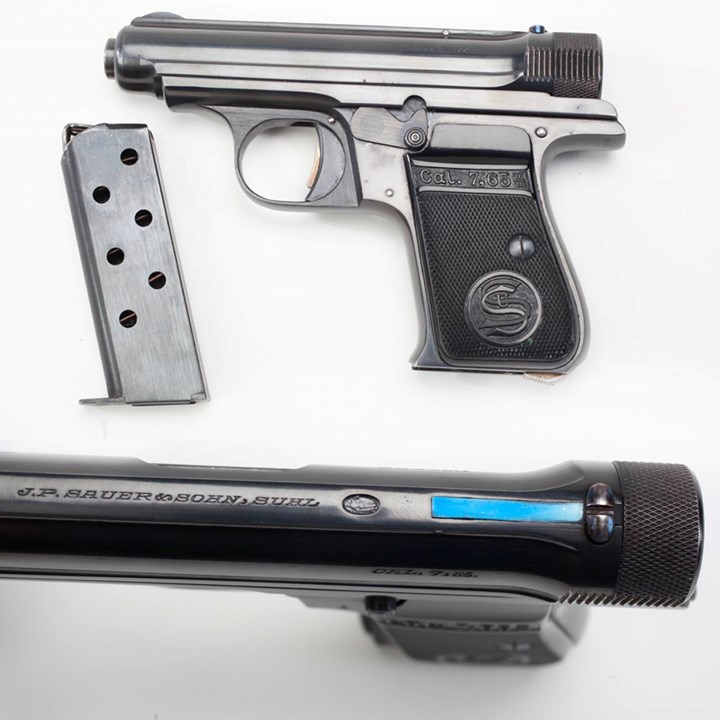 SHOW CAPTION HIDE CAPTION
This .32 cal semi-auto pistol is official, at least according to the translation of the  Berhorden model's designation. One of the first guns fitted with a small safety catch inside the trigger, it was employed by German police agencies and even became a staff officer’s sidearm in the German Army. Notice that deep fire blue on the top of the slide? Not something you see on the average handgun nowadays. 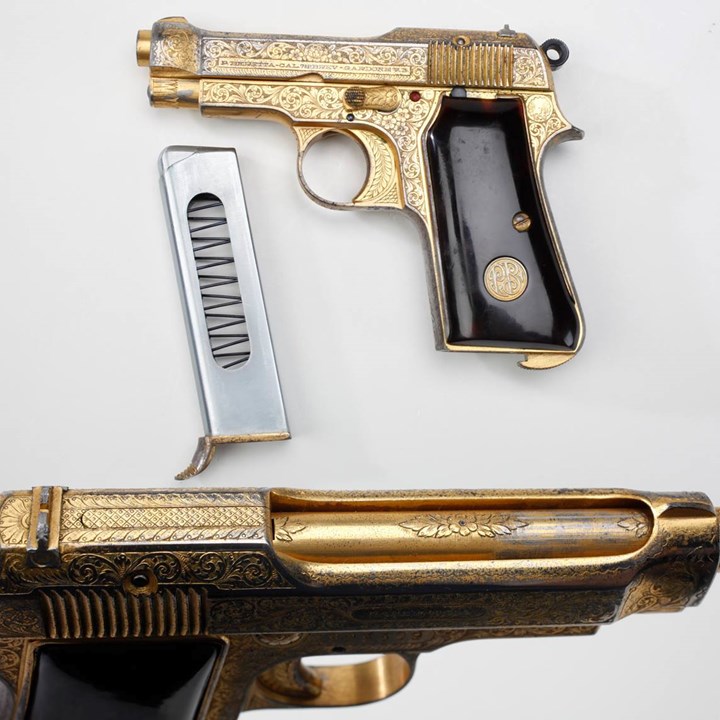 SHOW CAPTION HIDE CAPTION
As the first human to break the sound barrier in his experimental Bell X-1 craft in 1947, General Chuck Yeager’s 60-year flying career spanned from prop airplanes to jets. This engraved and gold-washed Beretta M1935 pistol was reportedly given to Yeager by a Cuban minister of defense after a flight demonstration. Over a half million of these .32 caliber handguns were made from 1935 to 1967, but you might say this one has all the right stuff. 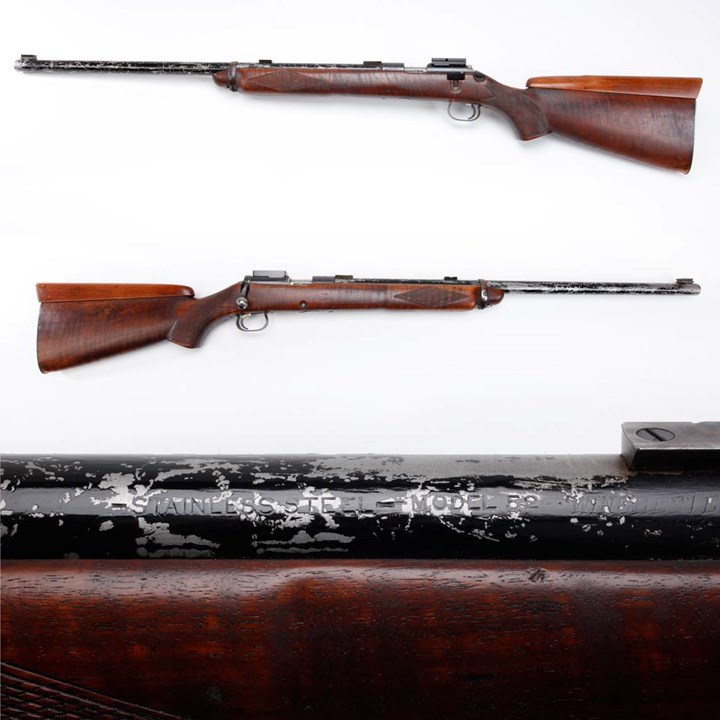 SHOW CAPTION HIDE CAPTION
Although this Winchester Model 52 bolt-action rifle is one of 125,000 made between 1919 and 1979, it's the only one that belonged to an NRA President - Thurman Randle, elected in 1944. Nicknamed “Ol’ Bacon Gitter” after being used to win a pig in a competition, Randle eventually had the gun re-barreled with in stainless steel only to discover that bright sunlight reflecting off of its surface made it difficult to see the gun’s sights. To remedy this, Randle painted the barrel black.
More
SUBSCRIBE
If you ever find yourself in Washington, D.C., southern Missouri, or norther New Mexico, take the opportunity to visit one of the amazing NRA Museums locations. The world class collection features thousands of historic firearms that not only have their own fascinating stories, but paint a larger picture of firearms history in the United States.

Each day, the NRA Museums Facebook page highlights one of their jawdropping pieces and we've compiled this past week's bunch in case you missed any... or just want to look at them again.

Learn more about the NRA National Firearms Museum, NRA National Sporting Arms Museum at BassPro, and the Frank Brownell Museum of the Southwest, at www.nramuseums.com.

IN THIS ARTICLE
NRA Museums Guns of the Week
More
SUBSCRIBE