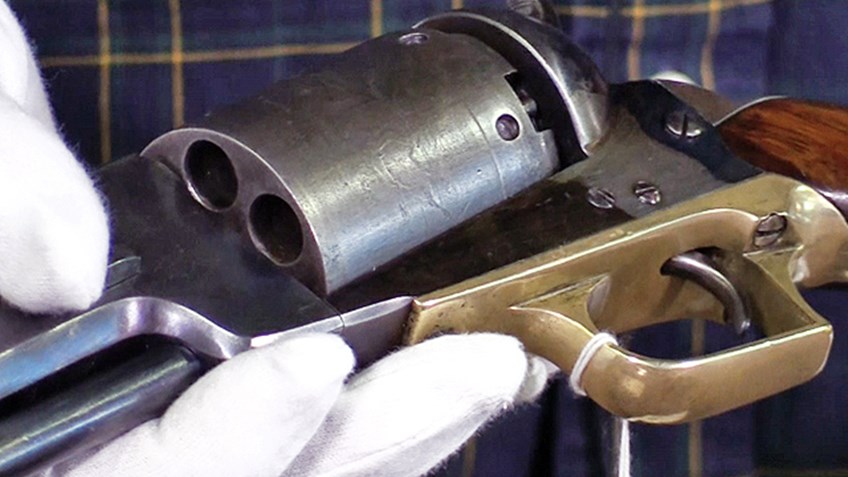 Tulsa, Oklahoma - When NRA Museums Director Jim Supica ventured onto the walkways of the Tulsa Arms Show, he was searching for a few special pieces. Something to catch the eye, tell a story, share a piece of seldom seen American craftsmanship with the folks (watching the Sportsman Channel) at home. Well he accomplished just that and more.

"What you’ve got here is the holy grail of Americana firearms collecting and Colt collecting in particular," said Supica. "Two very historic models. The Patterson models which launched Colt and the Colt Walker revolvers."

Brought out for a breather by Kevin Hogan from the Rock Island Auction Company, these two Colts are the featured items on tonight's episode of Curator's Corner.

"This is the very beginning of Colt," explained Hogan. "It’s wonderful Texas history, wonderful American history. The most desirable of the Patersons. We’re talking shell carved ivory grips, it does have a level, six silver bands, and you know in guns it’s always condition, condition, condition."

"To find a Patterson with that much original finish … I’ve never seen one better," Supica added.

Arriving in the original box, the Paterson comes with all the regular compliments — a ball charger, a powder charger, and a matching extra cylinder.

But as breathtaking as the Paterson is, one has to wonder how it stands up to the thumb print Walker-Colt.

"This Walker is extremely rare," Hogan began. "It’s well known gun, they call it the thumb print walker. Of course they made 1,000 Walkers, issued them in pairs to the Texas Rangers. But this is a civilian run gun. One of 100."

That matter, however, is up for dispute. 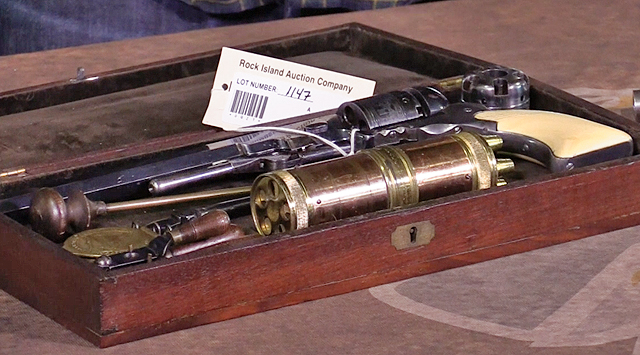 According to Hogan, removing the cylinder reveals a "C" stamped on the side. C for condemned.

Why is that significant? Because if they were only building 100 guns, then why were dipping into the condemned parts barrel on #1078 (civilian models ran serial #1,000 through 1,100). Probably means the intended number 1,100 never quite made it to the shelves.

But to get the whole story, including why they call it the Thumb Print Walker, you need to tune into the Sportsman Channel around 6:40pm eastern time this afternoon. There you'll find the Paterson, the Walker and the Supica just itching to go.