Port Clinton, Ohio - The final day of NRA's Long Range High Power Rifle Championship is devoted to Palma. A course of shooting different from others, it's been known to send some shooters home early.

"We saw one guy who fired the first relay, grabbed his equipment, and went home," said Gary, a competitor from Michigan. "Guess it's not for everybody."

Gathering at 7am for squadding, competitors are divided into groups of four. Two groups go to the pits and the other two head for the firing line. Group One shoots at 800 yards while the Group Two takes care of the scoring. 22 minutes later they switch. Once the first two relays are complete, Group Three and Four return from the pits and shoot at 800 and 900 yards. They continue flipping back and forth until the process is complete.

"They've been shooting everything at 1,000 yards all week. Switching to 800 and 900 yards is a little tough for some," said one NRA official. "But they'll find their sea legs. They always do."

As the day began, Shane Barnhart of the US Army Marksmanship Unit was holding on to a one point lead. There are 450 potential points that a shooter can earn in Palma, each of which Barnhart needs for the win. Whether or not the switch to 800 and 900 yards and a shorter firing time will hurt or help Barnhart is yet to be seen. It will not send him home early, but there are plenty of others who already fell victim to the challenge of Palma. 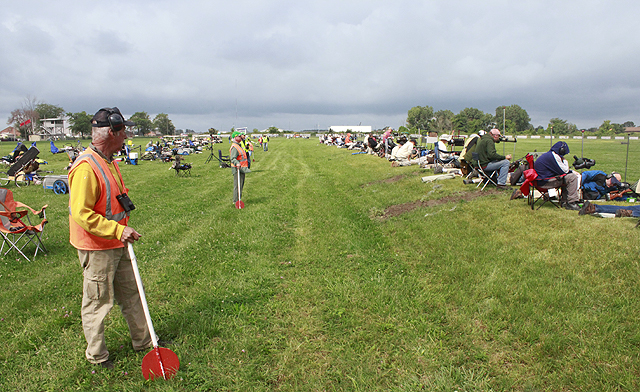