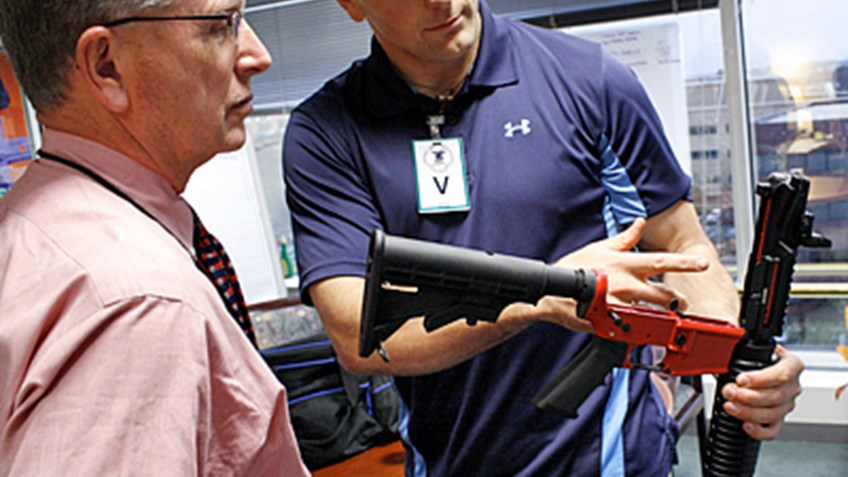 More
SUBSCRIBE
he NRA Program Materials Center, NRA’s online marketplace for everything from training handbooks and videos to shooting aides and program apparel, processed a record number of orders in January 2013.

The record stood for exactly 28 days, until February’s numbers came in. “Demand has been through the roof, to the point that our old benchmarks have had to be readjusted,” said Bill Poole, Managing Director of NRA’s Educational and Training Division. “We’ve had to adjust our replenishment triggers just to keep items in stock.”

January’s total of 6,800 transactions shattered the previous record of 4,700 set in March 2012. Nearly 7,000 orders were placed in February, followed by more than 6,400 in March. With the significant increase in orders during the first quarter of 2013, expectations are high for the remainder of the year.

“The NRA Education and Training Division is responsible for approximately 90 percent of the Program Materials Center’s orders in any given month,” said Poole. “So what these numbers really represent is increased demand for firearm training from the NRA, especially our pistol courses.” NRA’s pistol-based training courses are generally the most popular, making the “NRA Guide to the Basics of Pistol Shooting,” which is used in NRA’s Basic Pistol and FIRST Steps Pistol Orientation courses, the Program Materials Center’s top item.

While the reasons for taking a firearm training course vary from one person to another, research shows that personal protection is the primary reason why Americans own firearms today. According to a new poll conducted by the Pew Research Center, 48 percent of American gun owners surveyed said they own firearms primarily for personal protection, while 32 percent said they own firearms primarily for hunting – a major reversal from the findings of similar polls conducted in the late 1990’s.

Individuals seeking concealed carry permits, as well as surging gun sales over the past few months, are likely influencing the demand for NRA courses, Howard said. “Folks are lining up to apply for and obtain their concealed carry permits or to purchase their first gun, and those two factors are driving most of the demand for training,” said Howard. “We average 1,100 new applications for instructor credentials per month and have done so for the past several years because of the need for NRA Instructors.”

The need for NRA Instructors is so great because, in general, the majority of states require concealed carry applicants to have completed a firearms safety course taught by an NRA Certified Instructor. NRA Basic Pistol booklet Some states, like Michigan, Ohio and Connecticut, are more specific. Michigan, for example, accepts NRA’s Personal Protection In The Home course, and Ohio law has been interpreted as requiring completion of NRA’s Basic Pistol course.

The instructions for the Connecticut State Pistol Permit actually states that applicants “are required to complete a handgun safety course, which must consist of no less than the NRA’s ‘Basic Pistol Course,’ prior to submitting the application.” [Emphasis theirs.] With the in mind, it should come as no surprise that Ohio and Connecticut ranked 1-2 in Pistol handbook orders during January 2013, with 14,000 going to the Buckeye State and another 8,000 going to Connecticut. To put those numbers in perspective, Pistol handbook orders for the previous two months combined totaled 9,200 for Ohio and 6,900 for Connecticut.

When you consider that December 2012, January 2013 and February 2013 also rank as the top three months on record for firearm background checks submitted to the National Instant Check System, it becomes clear that Americans’ demand for firearms and firearms training is greater than ever before. And, as the numbers prove, when Americans seek out firearms training, they turn to the NRA, an organization that was built on firearms training and education more than 140 years ago. NRA’s training courses remain the gold standard in the industry and are highly regarded for the depth and quality of the instruction.

“Our courses are standardized, with a nationally recognized curriculum,” said Howard. “I often refer to one of our most prolific trainer’s quotes – “It’s like buying a McDonald’s Big Mac. If you buy one in New York City, Albuquerque, N.M., or Johnson City, Tenn., you expect pretty much the same burger. It’s the same thing with an NRA training course.”

“NRA has a long history of providing quality firearm safety training to the public, and I feel that this is the reason why NRA is often at the top of the list when states refer to firearm training provided by a national organization.”
IN THIS ARTICLE
NRA Program Materials NRA Education and Training
More
SUBSCRIBE