Why does the NRA have two trophies for Frank Parsons? 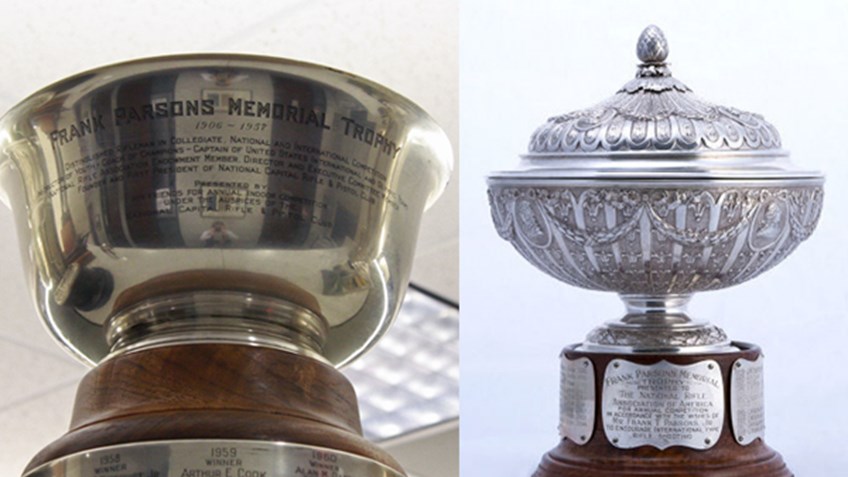 More
SUBSCRIBE
Here at the NRA we have not one, but two Frank Parsons Memorial Trophies. A seminal figure in the shooting world, Parsons was a famed collegiate, national and international shooter. But how did he wind up with two trophies by the same name?

Attending George Washington University, Parsons was a part of the first shoulder-to-shoulder Intercollegiate Championship team in 1928 and went on to coach at his alma mater for a number of years after graduation.

Parsons broke onto the international scene in 1930 by joining the International 300 meter Free Rifle team. He became an Olympian in 1948 in Amsterdam and shot in the 1949 World's Championship in Argentina. In 1952, now a well established member of the shooting community, Parsons filled the position of captain for both the Olympic and World's Championship teams.

A member of the NRA Board of Directors as well as sitting on the Executive Committee, Frank Parsons did a great service to not only the NRA, but the shooting world as a whole. After his passing in 1957, Parsons' friends at the National Capital Rifle & Pistol Club created a trophy in his memory out of a beautifully polished silver bowl. (That's yours truly in the reflection).

This Frank Parsons Memorial Trophy was awarded annually at an 80 shot indoor match initially held at - if you can believe it - the club's old range behind Union Station here in Washington D.C. and eventually the NRA range on Scott Circle.

In 1959 a completely different Frank Parsons Memorial Trophy was created, this one a covered sterling silver bowl, hand chased in Louis XV design. The trophy was presented to the NRA by Frank Parsons' estate and went into competition at the National Matches at Camp Perry. Each year the trophy is awarded to the winner of the Position Championship. Its most recent recipient was Tarl Kempley of Carson City, Nevada.

The National Capital Rifle & Pistol club no longer exists, but their Frank Parsons Memorial Trophy was donated to the NRA, where it sits on display in our Competitive Shooting Division. Perhaps one day it will go back out into circulation, but hopefully not at the Smallbore National Championships - that would get confusing.