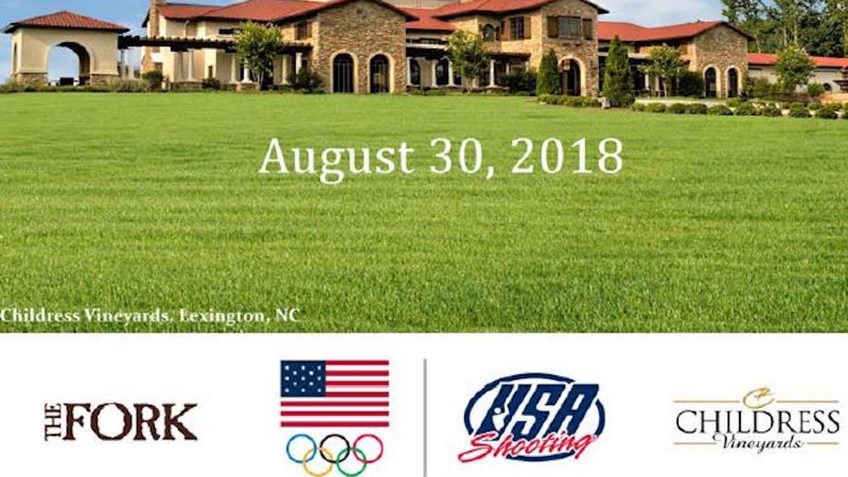 Add the National Rifle Association to the list of shooting industry organizations stepping up in a big way to help America’s Shooting Team during USA Shooting’s National Sporting Clays Cup Fundraiser on August 30 at Fork Farm and Childress Vineyards in North Carolina.

With Tokyo in Sight, USA Shooting’s National Sporting Clays Cup fundraiser will entice shooting sport enthusiasts to North Carolina on August 30 in support of the USA Shooting Team as they head toward the 2018 World Championships and the upcoming 2020 Olympic and Paralympic Games in Tokyo, Japan. As the only non-government supported shooting team in the world, USA Shooting relies heavily on donors and sponsors to help maintain a history of success that includes 110 Olympic medals.

“USA Shooting’s 2020 vision can only be realized by the involvement, generosity and backing of the shooting industry and with two years to go before the next Olympic and Paralympic Games, key partners and supporters are stepping up to assist America’s shooting team athletes,” said Keith Enlow, CEO of USA Shooting.  “We appreciate the NRA and their willingness to help make this summer’s fundraiser be the bullseye we need to sharpen our aim in 2020.”

"On behalf of the millions of NRA members and the tens of millions of shooting sports enthusiasts across our great country, it is my true honor to help America's finest in their quest for excellence,” said Richard Childress, First Vice President of the National Rifle Association. “These athletes and those who support them are the highest profile ambassadors we have for the shooting sports and we are all honored to stand behind them. Good luck Team America!"

The National Rifle Association of America was founded in 1871 by Colonel William Church and Captain George Wingate of the New York National Guard. The U.S. Revolver Association, founded in 1900, selected, trained, and financed Olympic pistol teams through the 1936 Games. Subsequently, the NRA assumed leadership and developmental responsibilities for pistol, rifle and, beginning in 1960, shotgun shooting. In 1994, USA Shooting became the U.S. National Governing Body for Olympic competition.

While widely recognized today as a major political force and as America's foremost defender of Second Amendment rights, the NRA has, since its inception, been the premier firearms education organization in the world. USA Shooting’s tradition of excellence was established and strengthened by NRA’s seven-decade involvement with Olympic shooting. The two organizations are now working collaboratively on programs to benefit youth development and coaching education as well as showcasing the passion to shoot inherent in the sport.

Join USA Shooting, the NRA and many other top shooting sport industry executives in celebration of America’s athletes and National Shooting Sports Month.  It’s the can’t miss fundraiser of the summer featuring a fun Sporting Clays shoot and VIP dinner at the exclusive Childress Vineyards.