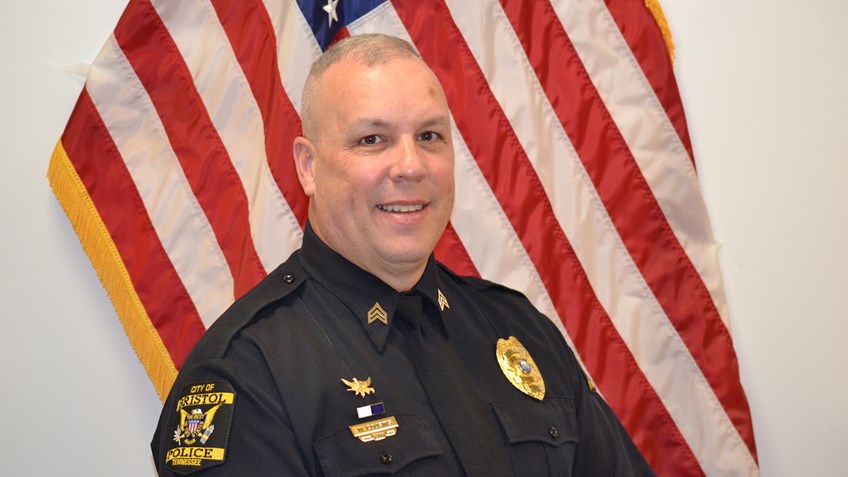 The National Rifle Association proudly recognizes Sergeant Mathew Cousins, of the Bristol (Tennessee) Police Department for his quick thinking, courage under fire and life-saving actions by naming him the 2017 NRA Law Enforcement Officer of the Year.

“The five million members of the National Rifle Association are proud to honor Sergeant Cousins as the 2017 NRA Law Enforcement Officer of the Year,” said NRA President Pete Brownell. “Sergeant Cousins’ courageous response to an armed threat to fellow officers and innocent lives reflects the highest standards of professionalism and training in law enforcement, and epitomizes the selfless service and bravery of police when facing immense danger in the line of duty.”

During the early morning hours of July 7, 2016, officers of the Bristol Police Department were dispatched to a local Days Inn motel to a report of shots fired. Sergeant Cousins, the second of three officers to arrive shortly after 2 a.m., discovered spent .223 shell casings on the ground. Realizing the severity of the situation with a suspect apparently armed with a rifle, Sergeant Cousins returned to his vehicle to obtain his patrol rifle and alert other officers.

Sergeant Cousins then observed the shooter, armed with a rifle and a handgun, emerging from behind a nearby store, apparently to ambush the officers from behind. Sergeant Cousins immediately challenged the suspect, but his orders to drop the weapon were ignored. The suspect opened fire on the officers and all three returned fire, striking the suspect and causing him to fall to the ground. The wounded suspect continued to try and fire his rifle at the officers from the ground.

Sergeant Cousins advanced on the downed suspect during an intense gun fight and the suspect was taken into custody. Only when the gunfight had ended was it determined that Sergeant Cousins had suffered a minor gunshot wound to his leg. The clerk at the Days Inn had suffered multiple gunshot wounds and was immediately transported to the hospital, and it was later learned that the suspect had fired several rounds into passing cars on an adjacent roadway, killing one woman.

Thanks to Sergeant Cousins’ quick observation of the spent casings and realization that the suspect was armed, as well as his quick response to obtain his patrol rifle and his detection of the suspect moving in to ambush the officers from behind, he prevented further injuries or deaths. Additionally, Sergeant Cousins’ decision to advance on the still-firing downed shooter turned the tides of the gunfight, resulting in the quick resolution to the matter.

The NRA will present the 2017 NRA Law Enforcement Officer of the Year Award to Sergeant Cousins at the NRA Board of Directors Meeting during the 147th NRA Annual Meetings & Exhibits, scheduled for May 3-6, 2018, in Dallas, Texas.