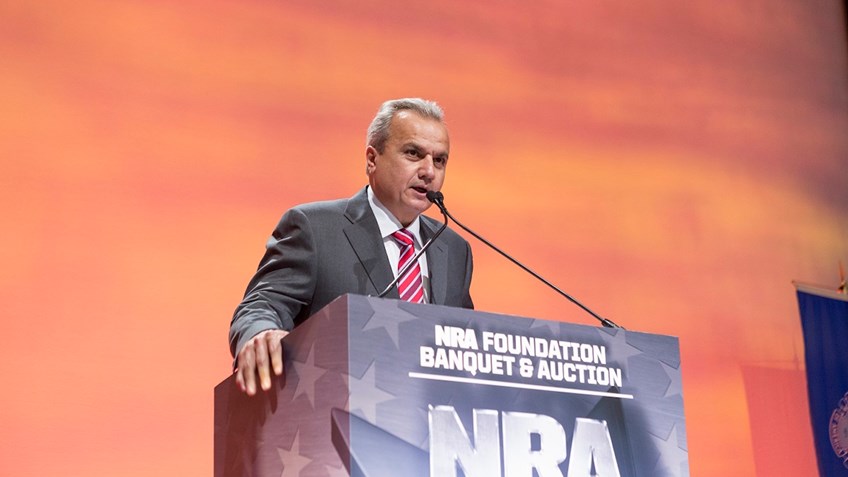 BAYONNE, NJ – May 1, 2018 – More than 80,000 attendees and exhibitors will be attending the NRA Annual Meetings & Exhibits later this week in Dallas, TX and Henry Repeating Arms is doubling down on their support this year through special event sponsorships and donations.

For the first time in the company’s history, Henry is a supporting sponsor of the NRA-ILA Leadership Forum, an exclusive event that will take place in a crowded arena at the Kay Bailey Hutchison Convention Center. President Trump spoke at this event last year and the key speakers this year continue the political significance including Vice President Mike Pence, Texas Governor Greg Abbott, United States Senator Ted Cruz, NRA executives Wayne LaPierre and Chris Cox, and several others.

Henry is also proud to sponsor the NRA Foundation Banquet again this year, which will kick off the events on Thursday evening. Anthony Imperato, the president and owner of Henry Repeating Arms, uses this evening to honor military veterans for their service, citizens who rose to the occasion to become heroes, local first responders, or outstanding leaders in firearms education.

President of Henry Repeating Arms, Anthony Imperato states, “The NRA Show is and always has been Henry’s biggest show. Over the years we’ve continued to grow as a company, which means that our presence at this show just gets bigger and better. Texas is a great state and we’re excited to meet our fans and customers while showing everyone just how much the Second Amendment means to us.”

Henry will be in booth #8251 with over 50 firearms on display, which is roughly one-third of the entire product line. Henry is also giving away a Second Amendment Tribute Edition .22 LR lever action rifle every day of the show.

Henry firearms are only available from a licensed firearms dealer. Most dealers offer a discount off of the MSRP.

For more information about the company and its products visit henryusa.com or call 866-200-2354.

About Henry Repeating Arms
Henry Repeating Arms is one of the leading firearms manufacturers in the country and the leading lever action manufacturer. Their company motto is ‘Made In America Or Not Made At All,’ and their products come with a lifetime guarantee backed by award-winning customer service. The original Henry rifle played a significant role in the frontier days of the American West and is one of the most legendary, respected and sought-after rifles in the history of firearms. The company’s manufacturing facilities are in Bayonne, NJ and Rice Lake, WI.