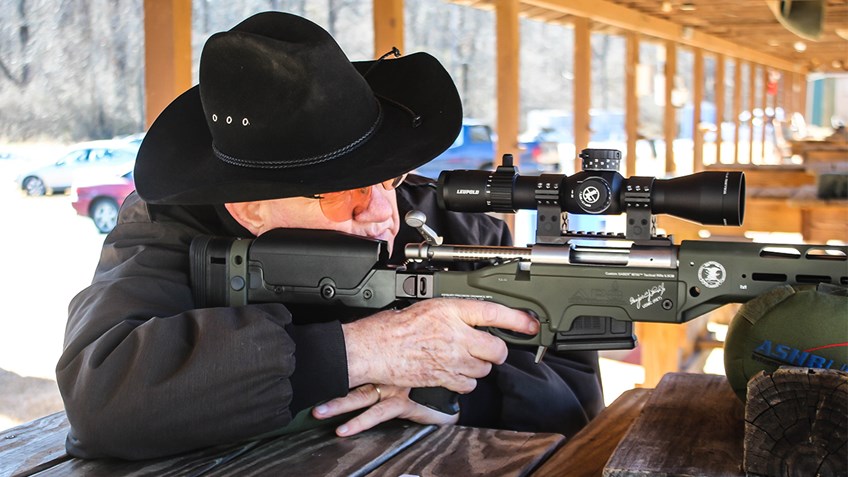 Known as the father of the modern U.S. Marine Corps sniping program, retired USMC Major and past NRA Secretary Edward J. “Jim” Land Jr. has spent his life service to the Constitution, freedom and the American way of life. An internationally recognized authority on firearms and training, he has also continually developed and shared his exceptional shooting skills and dedication to preserving the Second Amendment.

Land’s career began when he joined the Marines straight out of high school in 1953. After completing Officer Candidate School in 1959, he was commissioned as a Second Lieutenant in the 4th Marine Regiment in Hawaii, where he started shooting competitively and joined the Marine Corps Rifle Team.

In 1961, he founded the Corps’ first modern Sniper Course and met Carlos Hathcock—who would become an instructor and legendary sniper under Land’s direction in Vietnam. Land went on to create and command the Corps’ highly successful tactical field program in Vietnam, where his 17-man instructor team trained more than 600 snipers between September 1966 and April 1967. 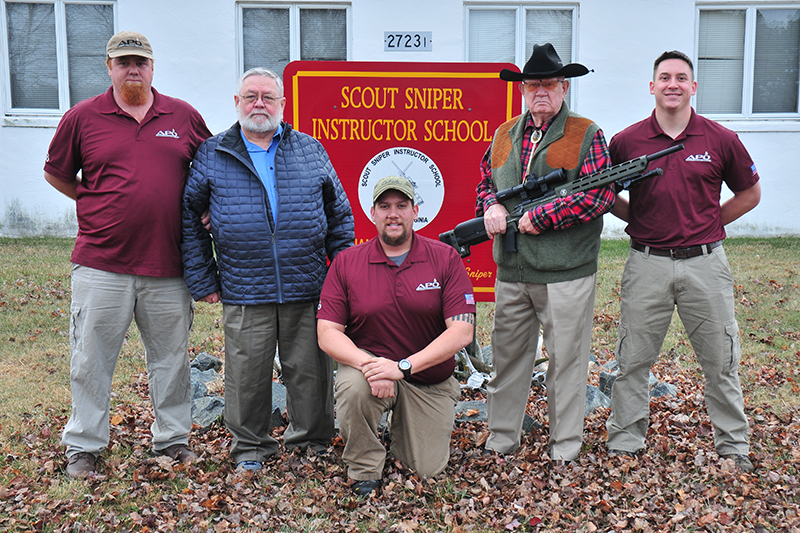 APO Staff with Gary Gregory and Jim Land at Marine Corps Base Quantico with the Signature Edition Rifle. Photo courtesy/APO.

Following the war Land served as the USMC Marksmanship coordinator and helped restart the Corps’ sniping program, which had been cancelled in 1972. Ultimately, a formal sniper school was established in 1977 at Quantico Marine Corps base and remains in full operation today. With that enduring legacy, Land retired from the Marine Corps as a Major the same year.

Through his time at Camp Perry, his work with NRA State Associations and Clubs, and his training as an NRA-certified instructor in several disciplines, Land established a strong connection with the NRA. He proceeded to serve the organization as a field representative and a director of two divisions before being elected to the NRA board of directors and then serving as NRA Secretary from 1994-2015.

The major now returns to work with the National Rifle Association in support of Friends of NRA’s fundraising for the future of the shooting sports. For the first time ever, he is lending his name and his signature to a custom tactical rifle, along with his personal involvement in the design and testing of the firearms. Soon, Friends of NRA supporters will have the chance to own one of 50 limited-edition SABER®-M700™ Major E.J. Land Signature Edition Tactical Rifles created by the Ashbury Precision Ordnance (APO) Custom Shop and Precision Weapons Section.

Land embraced the chance to work with APO, already having a connection to the team there through former Ordnance Production Manager Gary Gregory. A retired marine Master Sergeant, Gregory spent many years serving in the Corps with Land as a gunsmith for the Shooting Teams, and the two have remained close friends over the years. Since his retirement from APO in 2016, Gregory has continued to offer his expert guidance and consultation on projects, and he wasn’t about to turn down the opportunity to participate in this one too.

“When we get called to do something for the major, we don’t do it because he’s a higher ranking officer than us,” said Gregory. “We do it because we still love that man, and we respect what he does and has done. So when they said that they wanted to do this project with him, I jumped at the chance.”

Gregory will provide the final inspection and approval on the signature rifles, entrusted by Land to ensure that only the best product and performance leaves the shop bearing his name. “The only person that I trust to sign my name on something is Gregory,” the major emphasized.

Brad Kruger, NRA western region director, sparked the idea for this project. When David Wells, the NRA senior field representative in Virginia, visited the APO facility in July 2017 to coordinate local Friends of NRA fundraising efforts, he discovered a way to make it happen. “APO is a Virginia company, and they are very well known in the military sniper community,” Wells said. “I saw a picture of Maj. Land in their facility and found out about their connection to him through Gary Gregory. With the connection there, I began working with our Merchandise Manager Kathy Purtell to plan and organize a national-scale project.” 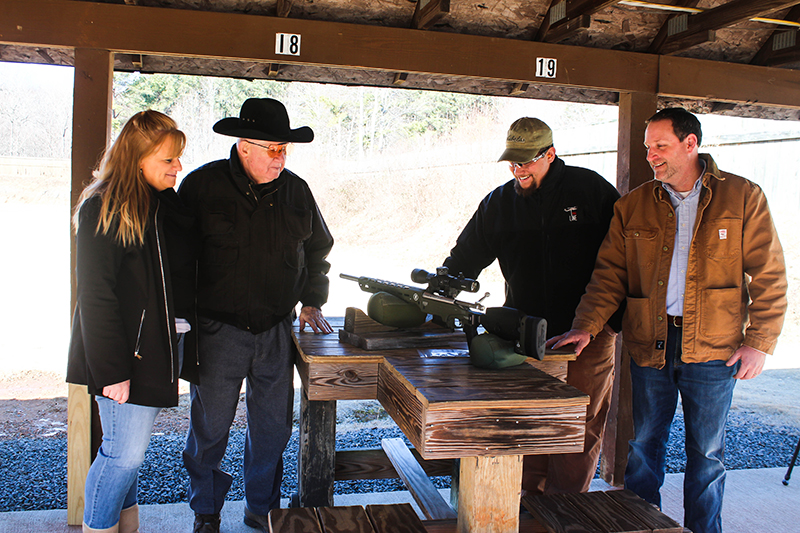 Six months later, the results of all the coordination and preparation are taking final shape. And that means range time.

When you present a Marine sniping legend and a double distinguished marksman with the chance to shoot the custom rifles he helped design, you can expect nothing less than a dogged focus on testing the firearms’ performance and demonstrating their accuracy. On a sunny day in January, Land did just that when he returned to the Rivanna Rifle & Pistol Club in Charlottesville, Va.—one of the first clubs he visited as an NRA Field Representative in 1977.

Joined by the teams from Friends of NRA and APO who have been working with Land on this exciting project—including APO Product Development Coordinator Matthew Peterson and Armorer Jeremiah Johnson—the major settled in to shoot the rounds needed for the commemorative casing displays that will accompany each rifle.

For everyone in attendance, watching the major was a special opportunity to observe a master at his craft. After taking his time to adjust and readjust each part of the rifle, the scope, the rest and more, Land began his cool, calm and deliberate shooting session. Although the project only required two casings fired from each gun, there was no rushing through the process for the major. Each rifle got zeroed in and used to produce an acceptable five-shot group.

That thoroughness allowed Land to observe how every aspect of each rifle was performing, ensuring that all parts and operation would be up to his standards. “It was excellent,” he said of the day’s shooting experience. “The thing that impressed me after firing 10 of these rifles was the consistency. The consistency of the trigger, the consistency of the gun’s ability to group. I shot a five-shot group out of each gun and they were under a minute of angle at 100 yards.” 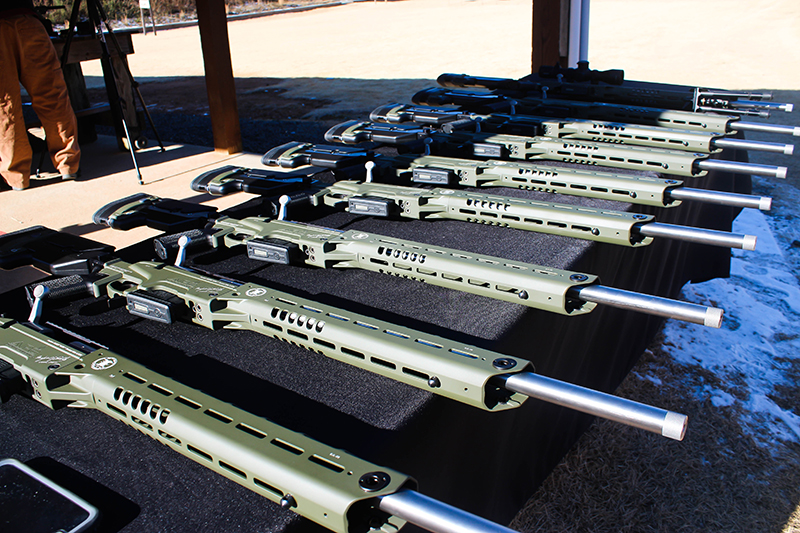 Noting the adjustable stock and cheek piece on the rifle, he also emphasized how important it is for a shooter to have good fit. “The adjustability is critical,” he said. “If the gun doesn’t fit you, then you have to adapt. You’ll be forcing the gun—and your body—into an unnatural position, and you can’t shoot consistently under those conditions.” He proceeded to brainstorm with Matt Peterson about how to communicate that key piece of advice to the future owners of these rifles. “This is not like a regular, off-the-line rifle,” he continued. “When you get a custom gun like this, the first thing you have to do is make it fit you.”

For this firearm, “custom” is almost an understatement. Every aspect draws off Land’s personal experience, knowledge and skill, starting with the battle-proven, American-made Remington M700 bolt action receiver which has a long and storied history in the Marine Corps. From there, he sought to incorporate the spirit of the rules that he has followed throughout his career: keep it simple, stick to the basics, and use technology to only supplement the basics. “Major Land designed every piece of the rifle, and every part had to meet his demanding expectations,” Wells noted.

“It’s been the highlight of my career working with Maj. Land,” said Peterson. “With the amount of knowledge he has amassed over decades of shooting, sniping, competition with rifles and pistols… he has been on top of every detail of the construction of the rifle.” 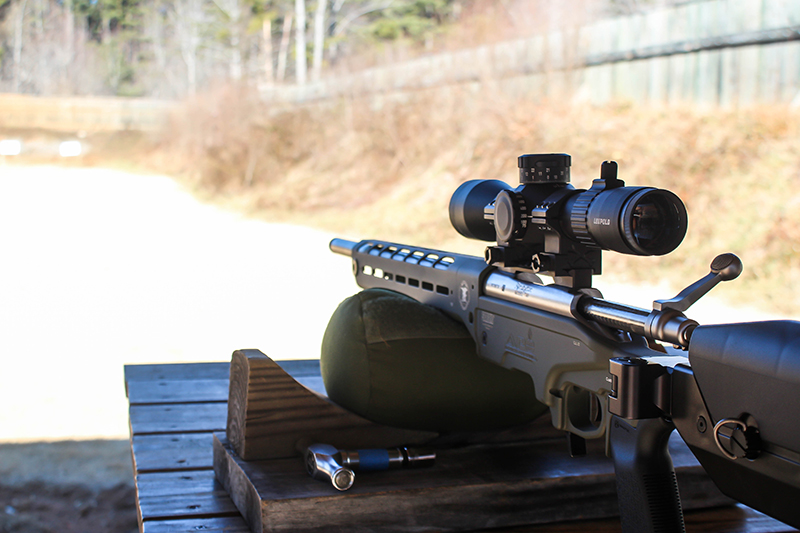 Weighing a comfortable 11.25 lbs., the rifles are finished in premium Cerakote™ in OD Green and Armor Black, consecutively numbered EJL-01 to 50, and laser engraved with the NRA seal on the handguard and Major Land’s signature on the receiver. And the final touch? The new Leupold Mark 5HD 3.6-18x44mm M5C3 Matte Front Focal Riflescope. Leupold generously donated half of them to this Friends of NRA fundraising project. “For your average modern shooter, this rifle is technically ideal. The gun fits the basics, and the glass is very good,” the major noted while shooting with the first Mark 5HD scopes being used outside the Leupold factory.

Once done with the shoot, Land emerged from the shade of the covered firing line and took the opportunity to soak up some sun with the club members while providing some more insight into his involvement with this project.

“One of the things I want to talk about is the caliber,” the major stressed. “The ballistic coefficient of the 6.5 Creedmoor is very high, and that means that the bullet is stable, it passes through the air without a heavy drag. It’s a lighter bullet, but it’s still accurate out to 1000 yards. That was the reason that we selected that caliber. It has the range and it has the accuracy.”

The day came to a close with a sense of pride and continued anticipation for the public reveal of the limited, signature edition firearm, along with the satisfaction of time well-spent on the range. “It was indeed a pleasure,” Land concluded. “Anytime I’m on the range and get to shoot someone else’s ammo, it’s a good day,” he added with a smile. 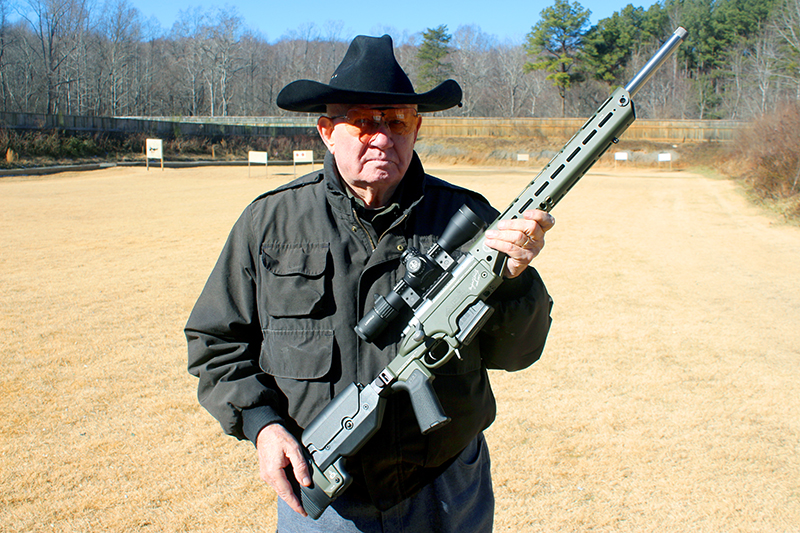 Each year, Friends of NRA staff works to collaborate with American patriots and top-of-the-line firearms manufacturers to create inspiring new items for its National Sponsor Program to help raise funds for The NRA Foundation. In 2018, the program is excited to offer a one-of-a-kind rifle and commemorative display honoring the former Secretary of the NRA and father of modern Marine Corps Scout Sniping. “This is a real American hero’s rifle,” emphasized Western Region Director Brad Kruger. “It’s not only practical but historic.”

In this unique tribute to a man of distinguished service and significant impact, a photo of Maj. Land from his days as a U.S. Marine accompany a biographical note and a 6.5 Creedmoor casing fired by the Major from one of 50 exclusive, custom-built Saber M700 Major E. J. Land Signature Edition Tactical Rifles from Ashbury Precision Ordinance. Each rifle is individually numbered and bears Major Land’s engraved signature. The display uses materials made, assembled and printed in the USA, and is presented in a rustic dark brown woodgrain frame with a triple matting in natural, laurel and forest green. It is exclusive to Friends of NRA and limited to 100 units. 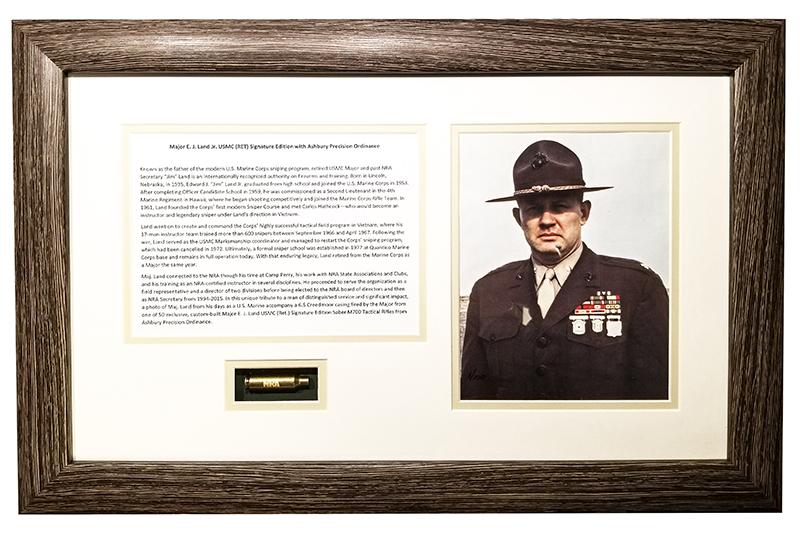 Support the shooting sports and become a Friends of NRA National Sponsor today! Click here for more information. To learn more about the Major Land Signature Edition Rifle sponsorship, contact your NRA Field Representative. Find yours at fieldreps.nra.org. Attend a Friends of NRA event near you to find more unique and exclusive merchandise and help fundraising for local firearms education and training programs.