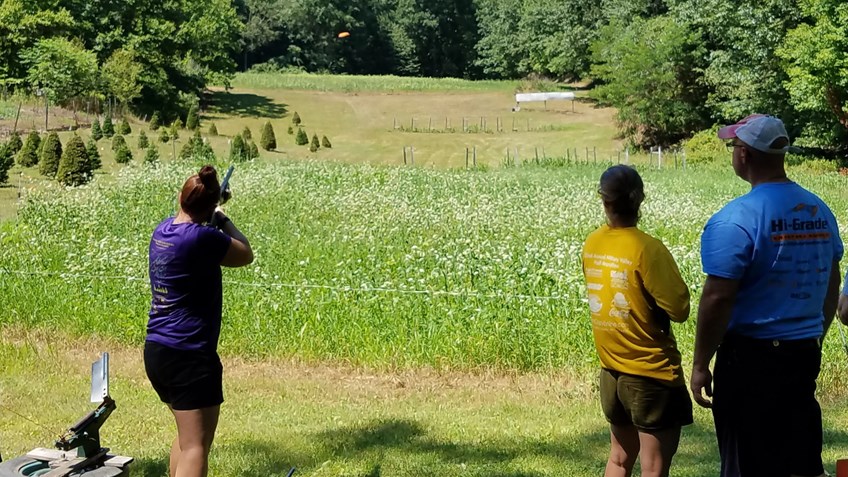 I grew up in a house with guns. My dad is a lifelong hunter, as is my brother who also participated in a 4-H marksmanship club in his youth. Despite this and all the nontraditional things my dad did teach me—among them how to tie a fisherman's knot and how to do a valve job on a small engine—safe gun handling was, oddly, not something I learned.

Fast forward a couple decades. I found myself living my adult life in a house with guns. I married a hunter, and I had four boys who all took up hunting and gun ownership and who shot in the same 4-H club my brother had attended. It wasn't unusual for me to find half a dozen long guns lined up on the dining room table in the days before buck season, or to have to make room on the kitchen counter so someone could clean a gun after a day in the field.

What changed that? No one thing, really. I didn't have an epiphany. It was more like a perfect storm of circumstances; I found myself in an empty nest and wanted—needed—a challenge, to tackle something new, something that would push me outside of my comfort zone. I watched a movie where the heroine confidently picked up her husband's shotgun and defended herself against an intruder. 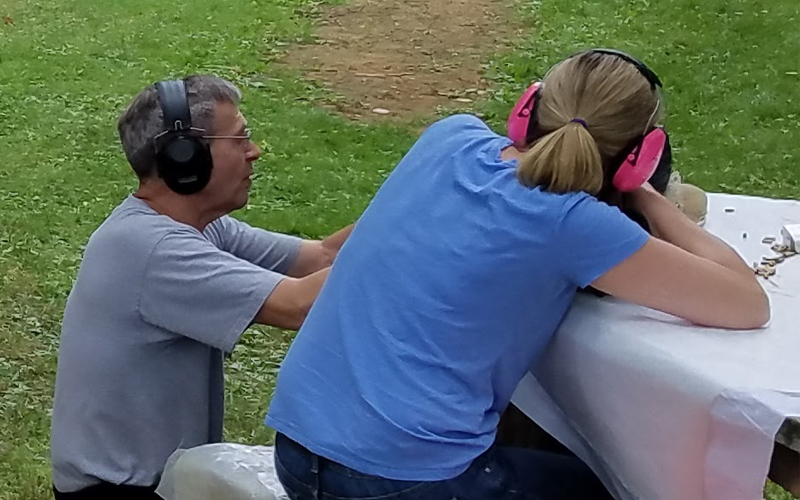 I realized I had things on my "someday to do" list and that those things were never going to happen unless I made them a priority; my somedays were not infinite. That soul searching likely had something to do with the above referenced empty nest. Plus, gun violence was in the news all the time, with guns and gun owners being demonized. I had grown up in a house, in a place, where hunting and guns were practically a religion, and I knew that guns and all gun owners were not evil. But fear sells. It can also make us victims.

The contrarian in me rebelled at that notion. The independent thinker my dad raised me to be didn't like that the media was spreading such a biased anti-gun message. I decided it was time—past time, really. I was tired of being ignorant, and I didn't want to be afraid of guns. I wanted to speak, or at least understand, the language the men in my life all speak.

Most importantly, I wanted my daughter, the youngest in the family, to learn about guns as well. I wanted her to have the knowledge that would empower her if she ever found herself in the presence of a gun or guns, and not just the ones in our house. I didn't want her to be afraid. In hindsight, it seems so obvious that basic, safe gun handling was something I should have learned years earlier. But late, I decided, was better than not at all. 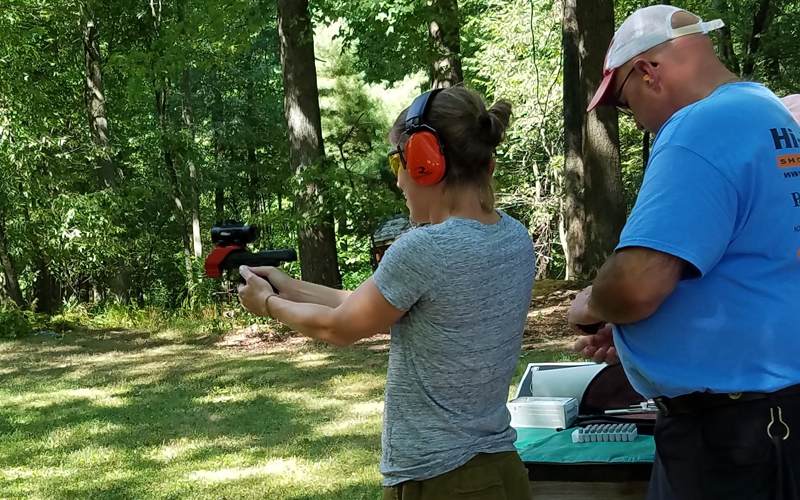 My husband said, "I can teach you whatever you want to know." After more than 30 years of marriage I knew how that would go, and it wasn't what I had in mind. I wanted official, "real" instruction, not an afternoon in the pasture or in the woods at camp. So I called Ernie Harpster, a family friend and the man who had coached my boys, my brother and hundreds of other kids over the 50 or so years he was the Centre County 4-H shooting club leader. Ernie has coached kids who went on to shoot at the collegiate level and even one who became an Olympic shooter. Clearly, he could be relied upon to teach basic, safe gun handling. I explained what I wanted to learn and asked if he would instruct me and maybe a friend or two.

"Sure," Ernie said. "We'll meet at my hunting camp where I have a range set up and three shooting benches. I'll get a couple of friends to help." I asked him how many women I should bring with me. "Ehh," Ernie thought out loud, "nine would be a good number."

So I asked nine friends, all women like me who had firearms in their houses but were not hunters or shooters themselves. But it seemed everyone knew someone else who wanted to come, and I didn't want to turn anyone away. It was a bit of a surprise to me—and I think to Ernie and the guys, as well—when 13 women signed up. The fact that firearms training and the shooting sports traditionally have been largely male-dominated pursuits adds to the intimidation for many women. It takes a certain amount of courage to overcome that, and it was inspiring to know there were other women out there who wanted to stop being ignorant and afraid. 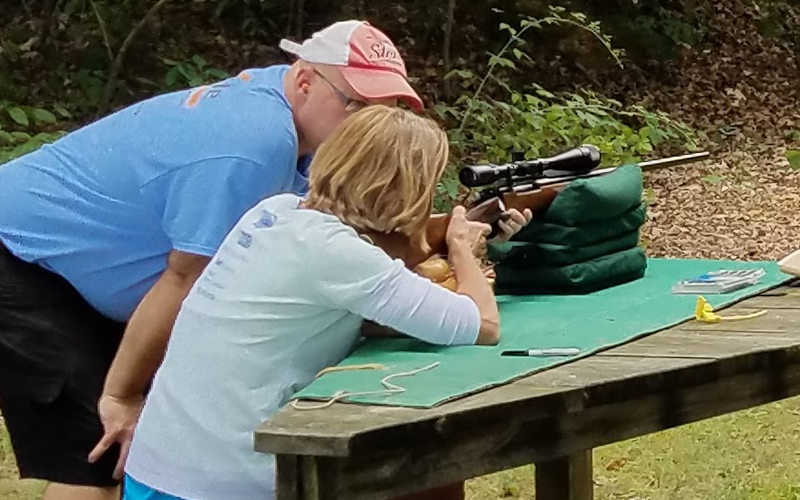 That first August, Ernie and his team put together a tremendous two-evening course that we sort of jokingly called “Girls and Guns.” It featured one night of classroom instruction and one evening on the shooting range actually shooting all the guns we learned about in the classroom. Our instructors started by explaining the main parts of a gun, using a few handouts and the dozens of guns on hand to help. They explained and showed us the differences between a shotgun and a rifle, between semi-autos and revolvers. They talked ammo, explaining rimfire vs. center fire, showing us a selection of bullets in various calibers and letting us see what was inside of some shotgun shells.

The course also covered the basics of licensing, concealed carry, scopes, muzzleloaders, gun safes, guns for hunting and guns for home and personal defense. We asked questions—hundreds of them. Ernie and his guys, Scott Sipple and Gib Moyer, continually reassured us that "there's no such thing as a dumb question." All NRA Certified Instructors, they were patient, knowledgeable, and clearly very happy to share their passion.

Feedback that first year was enthusiastic, but I thought that was it. A one-and-done event. 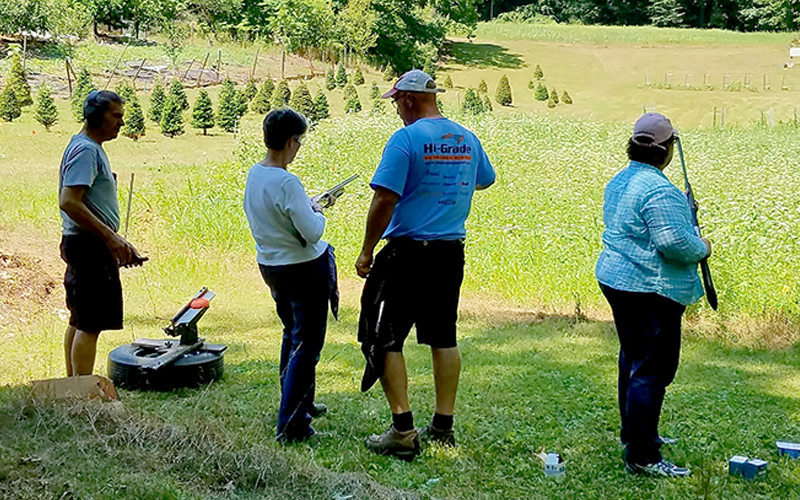 However, the next year I heard from several friends, acquaintances and others who missed Girls and Guns, along with two women who wanted to take the course a second time as a refresher and another who wanted to come again and bring her eight-year-old daughter. So I called Ernie and the guys, and we held Girls and Guns: round two. This past summer of 2017 was the fourth year. We've had young mothers, grandmothers, pharmaceutical sales reps, bookkeepers, administrators, farmers, doctor's wives, paralegals, an architect, that eight-year-old, high school students, teachers and more.

Ernie and the guys have adjusted the Girls and Guns course each year, fine-tuning based on what works and what doesn't. Now it consists of one evening in the classroom—about three hours—and a Saturday morning on the range to shoot the variety of the guns talked about, demonstrated or handled during the classroom portion. We use both guns the guys bring and ones participants bring from home; Ernie feels strongly if we're going to be familiar and comfortable with a particular gun, it should be the one we have in our own house.

Personally, I've learned a lot of things from attending Girls and Guns, but the most unexpected is how much fun it is to shoot a shotgun. Thanks in large part to Scott Sipple, I've taken up shotgunning. I still have no interest in hunting, but I am totally, seriously, addicted to sporting clays. I bought my first gun, a Beretta 391 20 ga., and my husband and I have spent literally hundreds of enjoyable hours together in the outdoors in the pursuit of breaking little clay birds.

Through all these activities, I've met other women who like to shoot and some who like to hunt, and I've made a lot of new friends. And now, more often than not, it's my gun on the dining room table, and I'm the one cleaning my gun at the kitchen counter.

NRA Certified Instructor Scott Sipple—whose passion for hunting and his dogs, extraordinary patience, extensive knowledge of firearms and ammunition, and appreciation for the importance of firearms education and safe gun handling, as well as his great sense of humor, made him a perfect instructor for Girls and Guns—was an enthusiastic ambassador of the shooting sports until he unexpectedly passed away in 2017. The Scott Sipple Foundation is a result of those who knew Scott wanting to honor his memory, and his love for shooting, hunting, conservation and stewardship. Thanks to the Scott Sipple Foundation, the curriculum for Girls and Guns is now available to others who live too far from central Pennsylvania to attend the course there. The Foundation and its website are a work-in-progress, but information will be available soon at ScottSippleFoundation.org.