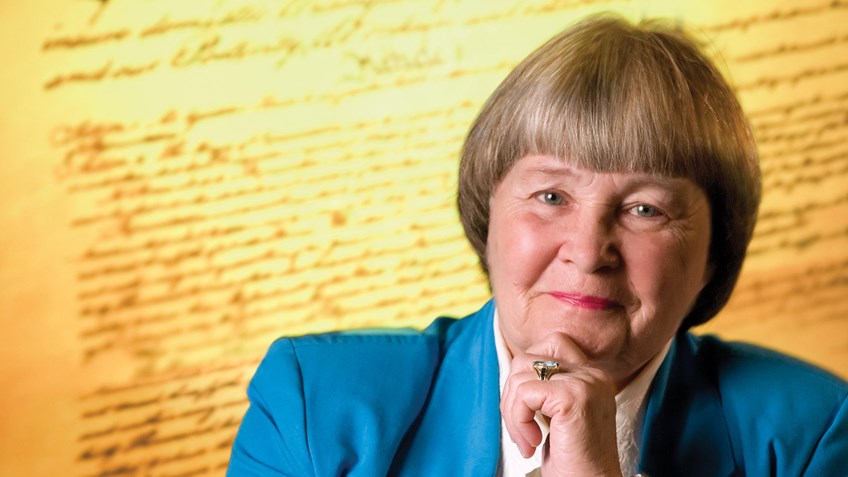 Sometimes the biggest of impacts and greatest of influences come in the smallest of forms. There is no better example of that mighty combination than NRA Past President Marion P. Hammer. The 4-foot 11-inch powerhouse of passion and tenacity has made a profound difference in the fight to preserve our Second Amendment freedoms as both a lobbyist and an advocate for The NRA Foundation’s mission to Teach Freedom through firearms education, training and safety.

For the past two years, that voice behind some of the most influential legislation in support of firearms freedoms has taken a leading role in Friends of NRA’s non-political grassroots fundraising efforts. In 2016 Hammer and former Florida Lt. Governor Bobby Brantley became co-chairs of the Capital City committee in Tallahassee, Fla. The pair sought to bring new life to the event by tapping into their network of professionals in the legislative and political arena. “We wanted to see if we could motivate our supporters and peers,” explains Hammer. “Because of their work with government, these connections and friends understand how important private funding is to bringing youngsters into our mission.” 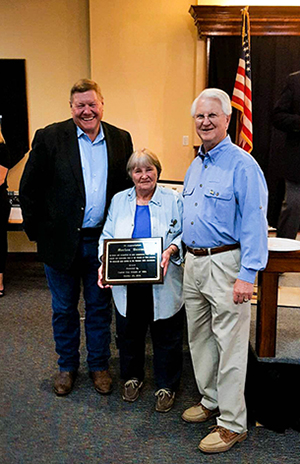 By ensuring that the community understood how a Friends of NRA event is a place to get great, unique merchandise while making a significant financial contribution to funding firearms education and youth programs—with the added bonus of a charitable tax deduction—Hammer and Brantley hope to create the perfect atmosphere for people to give generously to help protect the future. That tactic paid off. The Capital City event’s attendance and fundraising skyrocketed from 87 people and $7,000 in 2015 to more than 500 people and $56,300 in 2016. And the incredible growth didn’t stop there. The committee’s 2017 event earned it the NRA Volunteer Fundraising award for highest net income growth, drawing more than 550 attendees and raising nearly $111,000.

“The response in our community has been overwhelming,” notes Hammer. “In 2016 we totally sold out two months before the event and set an attendance record, as well as a new record for net revenue for Capital City Friends of NRA. I was amazed and overjoyed! We learned a lot that first year and were able to make our 2017 event even better—we sold out sooner and set an awesome new state record by doubling our net revenue over 2016.”

That success drives interest, but Hammer explains that the event has been and will continue to be limited in size. “I believe that helps create a desire and a demand to be a part of something great,” she says. “Further, we sell only tables and use only quality merchandise—items that our attendees actually want, can use and will be proud to have.” 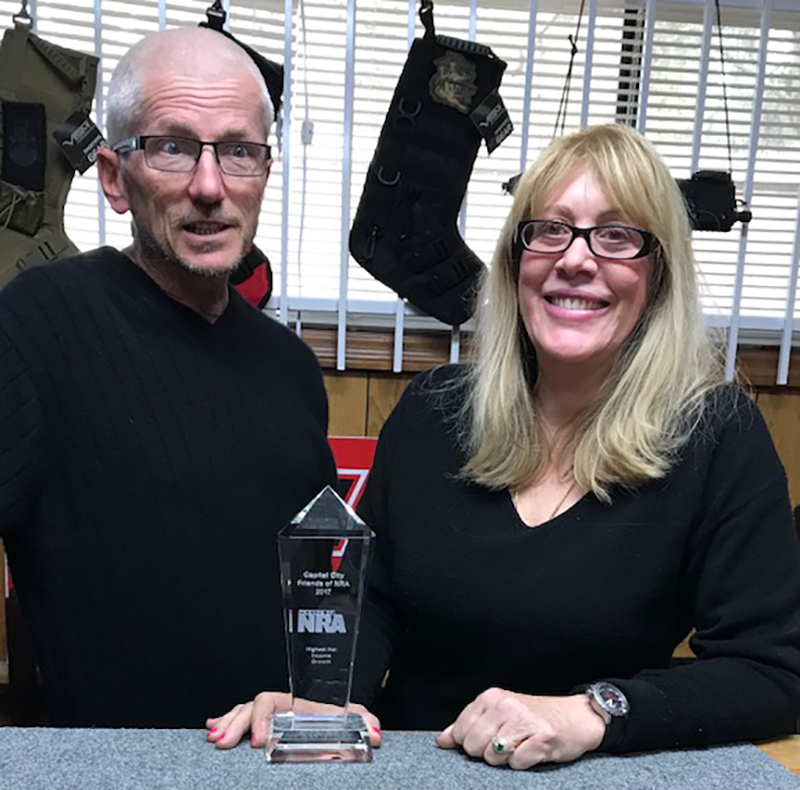 The planning to sustain growth and success into 2018 began before last’s year event even took place. Table reservation forms in every seat packet at the 2017 event resulted in requests for reservations for 28 more tables than available, selling out the 2018 event before the 2017 event ended.

Hammer knows the importance of staying informed and knowing your crowd. “Although it is a social and charity event, we are trying to run it like a business,” she shares. “We track everything: who is spending money on games, on the silent auction, in the live auction; what merchandise is the most and least popular. We include a survey in our individual packets so guests can tell us what they like and don't like. It's working.”

And that drive to generate growth for Friends of NRA extends far beyond her own committee. “My work in the legislative and political arenas is about competition, and I love competition,” Hammer admits. “I'm trying to help motivate other committees to beat our record. Lt. Governor Bobby Brantley, Dawn Hoffman of DSH Firearms and I have made an incredible team and we are working hard for 2018. We challenge other committees to find new ways to make 2018 the most incredible year the Friends of NRA program has ever had.” 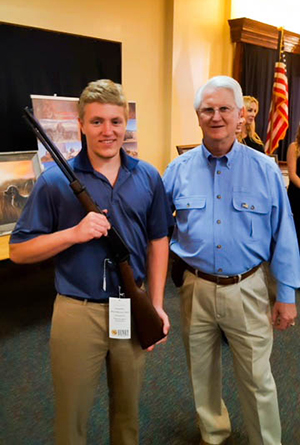 Along with celebrating the recent achievements of the Capital City committee, Hammer also shares in the excitement of seeing the Friends of NRA program reach its 25th Anniversary as a thriving success.  “As an NRA Board member who worked to help create The NRA Foundation and as NRA’s Second Vice President when the Friends program was created, I am proud of what we have accomplished,” she says. “Through my six years as a national officer of NRA, I traveled the country attending Friends events to promote attendance and support. To actually have been, and to still be, a part of the whole process is a true source of pride. I am most especially proud to have been Co-Chairman of the Capital City Friends of NRA committee in our 25th Anniversary year and to have been a part of setting a new Florida record for the most net income for a single event in my state. It is awesome and motivating.”

When the Friends of NRA program was first coming to life, Hammer didn’t hesitate to fully commit her support. “She’s been involved in this program for 25 years,” says NRA Southern Region Director Al Hammond, who recalls her speaking at a number of events when he started out as a Field Rep in the early years of the program. “And now she’s stepped up to be a chairman of an event. She’s bringing in people who have donated politically or are politically active, but bringing them on board to this completely different part of the NRA. She truly exemplifies what we’re trying to do—her focus has always been youth programs and getting people out participating in the shooting sports. To have a successful committee that puts on successful events, you have to have the right people involved, and she’s it.”

There’s no question that Hammer’s heart, soul and experience are all fully engaged in her dedication to the cause. “My passion is securing the future of the Second Amendment and Freedom,” she emphasizes. “Our Founding Fathers fought to give us Freedom and the Second Amendment and our ancestors fought to keep it for us. My father gave his life in World War II fighting for Freedom. Now it's our time to fight to protect it for future generations and I'm just trying to do my part.”

Fighting on the legislative and political fronts is just a part of that mission. The fight for the future requires us to prepare today’s young people to carry on those efforts. “We do that through our work to help fund The NRA Foundation so we can provide programs that teach our traditions,” stresses Hammer, who includes helping pass the nation’s first “shall issue” right-to-carry law in 1987 in Florida, serving as the NRA’s first female president and improving the Youth Hunter Education Challenge, along with helping start the Eddie Eagle GunSafe® program and Youth Education Summit, as her greatest moments in service to the right to keep and bear arms.

“The future of our nation and our heritage of freedom lies in the hands of our children and grandchildren,” she continues. “What we do to help shape their lives will chart the course for generations to come. If we don't teach youngsters about hunting, target shooting, collecting, firearms safety, responsible gun ownership, and conservation, they won't have a vested interest in the Second Amendment. They won't know that those rights are important to enjoyment of outdoor activities as well as self-defense and freedom. If they are not passionate about the Second Amendment, freedom and liberty, it could all be lost.”

Friends of NRA and The NRA Foundation strive to support and promote shooting sports programs that pass on those values and traditions. In expressing her hopes for her own legacy and that of America’s freedoms, Marion Hammer captures the core of our fundraising mission: “I want my legacy to be that I helped forge a path to the future by showing youngsters the way and that I helped raise the money to teach them to love Freedom, the Second Amendment and the outdoors. And further, to teach them to appreciate what the NRA and The NRA Foundation have generously done for America.”

Do you know of an organization that could benefit from an NRA Foundation grant? Apply at www.nrafoundation.org. Click here to learn more about Friends of NRA and find an event near you.