The Hawken Gun: A Family's Contribution To The Evolution Of American Arms 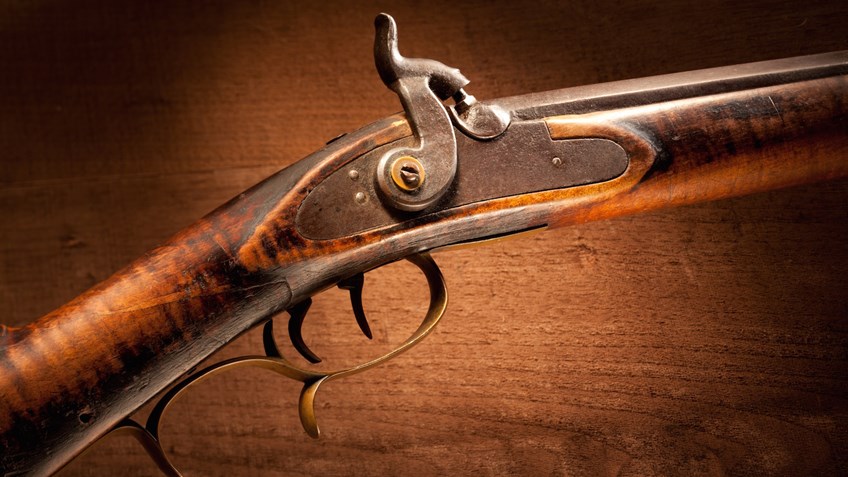 Some avid late-night television viewers still try to catch the opening scene from the 1972 film Jeremiah Johnson, where the protagonist, depicted by Robert Redford, steps off the boat into a frontier settlement while a voiceover announced, “He was looking for a Hawken gun, .50 caliber or better, but he had to settle for a .30. But, damn, it was a real Hawken. You couldn’t go no better.” Hollywood took great liberties with the telling of this story, but the Hawken gun itself is as much a part of the legend as the men who used them on the frontier.

The American West was an unforgiving environment where strong and powerful arms were a necessity. From the first expeditions across the Great Plains, including Lewis and Clark following the Missouri, having a well-built firearm could easily make the difference between life and death. While Hawken rifles were not the exclusive choice of trappers and mountain men, the durable characteristics of the Hawken were widely emulated by other gunmakers. The Hawken made its mark in the West, but the gun’s story -- and the men that made these guns -- actually began in the East.

Jacob Hawken started his formal gunsmithing career as an armorer at Harpers Ferry National Armory, then part of Virginia, in 1808. The armory pay rolls place him on staff there until February of 1818.  The first track of Jacob out west in Missouri is a deed for land in New Madrid, also in 1818. By 1825, he had set up a shop in St. Louis, right next to the Mississippi River. The early guns Jacob would have made there were likely full-stocked rifles, flintlocks quite similar to the long rifles being crafted in Pennsylvania and Ohio. His brother Samuel, who had been working in Hagerstown, Maryland, moved westward to Xenia, Ohio before joining Jacob in St. Louis. Jacob Hawken, it is believed, had come out west with only his horse and a rifle for companionship. Sam Hawken, after the passing of his wife, sold his shop to his son William, who remained in Hagerstown.

The earliest Hawken guns were flintlocks, but as the percussion ignition system came into widespread usage, conversion to percussion became a regular “upgrade” for these older pieces. Older trappers still favored the flintlock for the ease of finding flints that could be chipped to fit, instead of relying on percussion caps that needed to be shipped from far away. About the time the two brothers began working together in St. Louis, the typical rifle produced in the shop would have been a percussion gun. The brothers’ shop in St. Louis may have been an epicenter for the manufacture of “plains rifles,” half-stocked big-bore guns usually chambered in .50 caliber or bigger, but that wasn’t all that was produced there. Currently on exhibit in the NRA’s National Sporting Arms Museum at Bass Pro Shops in Springfield, Missouri is a lighter .38 caliber, S. Hawken St. Louis-marked rifle that was recently donated. 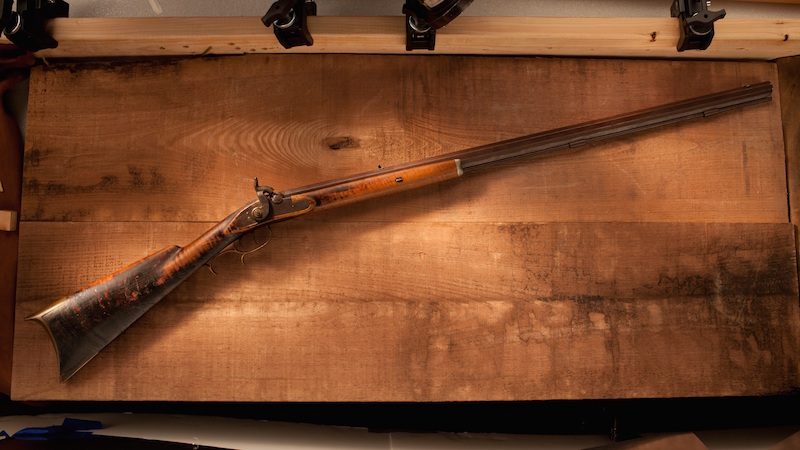 The .38-caliber Hawken had been purchased by the donor’s great grandfather, Florenz Dieckmann, in 1849 at the St. Louis shop and used for deer and turkey hunting in Missouri. The Hawken shop also produced rifles that could be used for game other than grizzlies and bison. But what helped establish the Hawken as being the mountain man’s gun of choice was an interview given by Samuel Hawken in 1882.

In this newspaper interview, it was asserted that many Hawken rifles had been furnished to William Ashley, who was outfitting an expedition’s worth of trappers in search of beaver and other pelts. Recent research into surviving records indicates this was not the case, and that the Hawken shop might have only repaired a few rifles and supplied some iron traps and other gear for the men on the expedition. 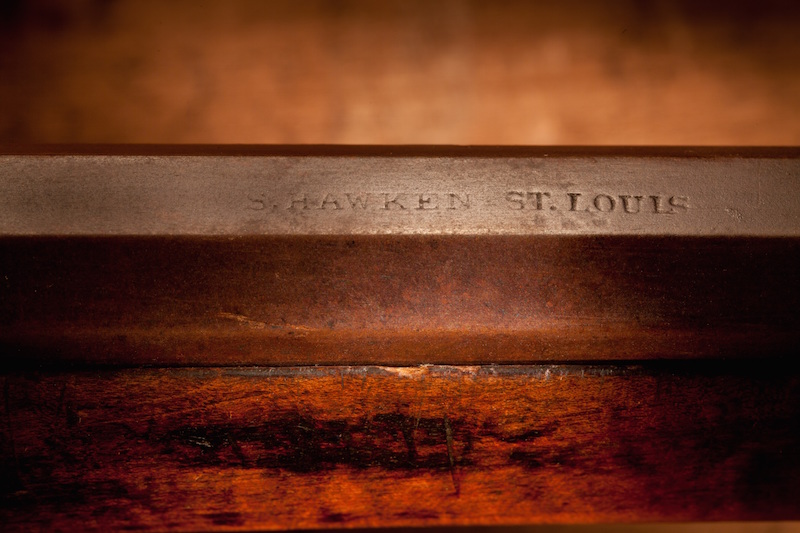 Two other Hawken rifles are displayed in the National Firearms Museum in Fairfax, Virginia. The Samuel Hawken plains rifle displayed in the American Liberty Firearms Collection, donated by Dr. William L and Collette M. Roberts, is a .50-caliber gun that also proudly bears the S. Hawken St. Louis marking atop its barrel. At some point in its working lifetime, this rifle had its stock replaced, but the original eagle inlay and patchbox cover from the old stock were transplanted to the replacement stock.

The other Hawken in the NRA National Firearms Museum galleries never went West, remaining within 100 miles of where it was crafted – Hagerstown. William Hawken – a third Hawken brother -- stayed in Hagerstown and carried on the family tradition, creating a full-stocked rifle. This .42-caliber long rifle more closely resembles a Pennsylvania gun with its engraved patchbox cover and long 39-inch barrel.  The gun’s barrel was marked Lutz and was manufactured by a local barrel maker, but the top of this rifle bears the W. Hawken marking.

William Hawken had bought out Samuel’s shop, but decided to close down his own shop in 1840, an endeavor that was later operated by his son John. This rifle was donated from an NRA member’s estate who resided in McLean, Virginia. McLean is closer to the NRA National Firearms Museum than Hagerstown, but its proximity indicated this percussion rifle really hadn’t traveled far from its origins. 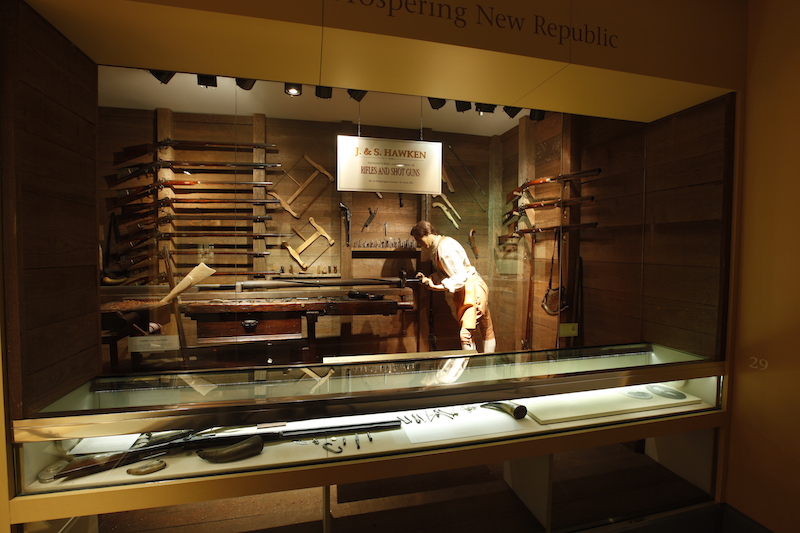 For those interested in learning more about the Hawken brothers and the rifles they made, a recreation of the St. Louis Hawken shop, complete with a rifling machine that was used in Missouri in the 1840s, is part of the NRA National Firearms Museum’s galleries. Inside this recreated Hawken shop, a mannequin labors to finish rifling a barrel while dozens of other long arms of the period reside on the nearby wall reside. See the Hawken rifles along with thousands of other historically significant, unique and important firearms in the NRA Museums galleries in person or online!