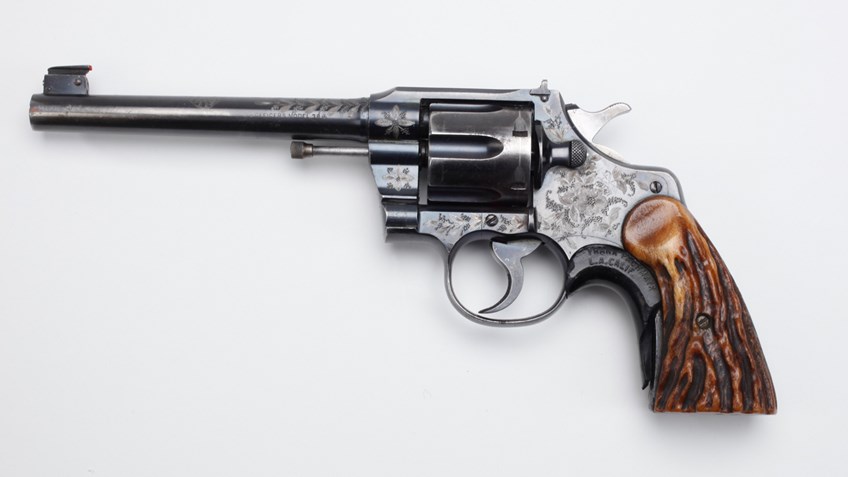 He was a part of an incredible shooting combination team with his wife, “Plinky,” but Adolf “Ad” Toepperwein knew from the start that his future lay with exhibition shooting.

Growing up in Boerne, Texas, the young Ad lived with his gunsmith father until the age of ten. That gun-loving father provided his son with a crossbow, a 14 gauge shotgun and a .22 caliber Flobert rifle before his death, and the young Toepperwein spent as much time as he could spare to go shooting.

This interest reached a culmination when a touring Wild West show came to San Antonio, Texas and Ad was able to see the legendary Doc Carver and witness his skill in exhibition shooting. That brief contact shaped the rest of young Ad’s life. But his livelihood was to be first provided by stints in a San Antonio crockery shop and as a cartoonist for the San Antonio Daily Express. Selling pottery and newspapers wasn’t a routine Ad agreed with, so the young shooter took a chance with a marksmanship demonstration at a local theatre for that to change. 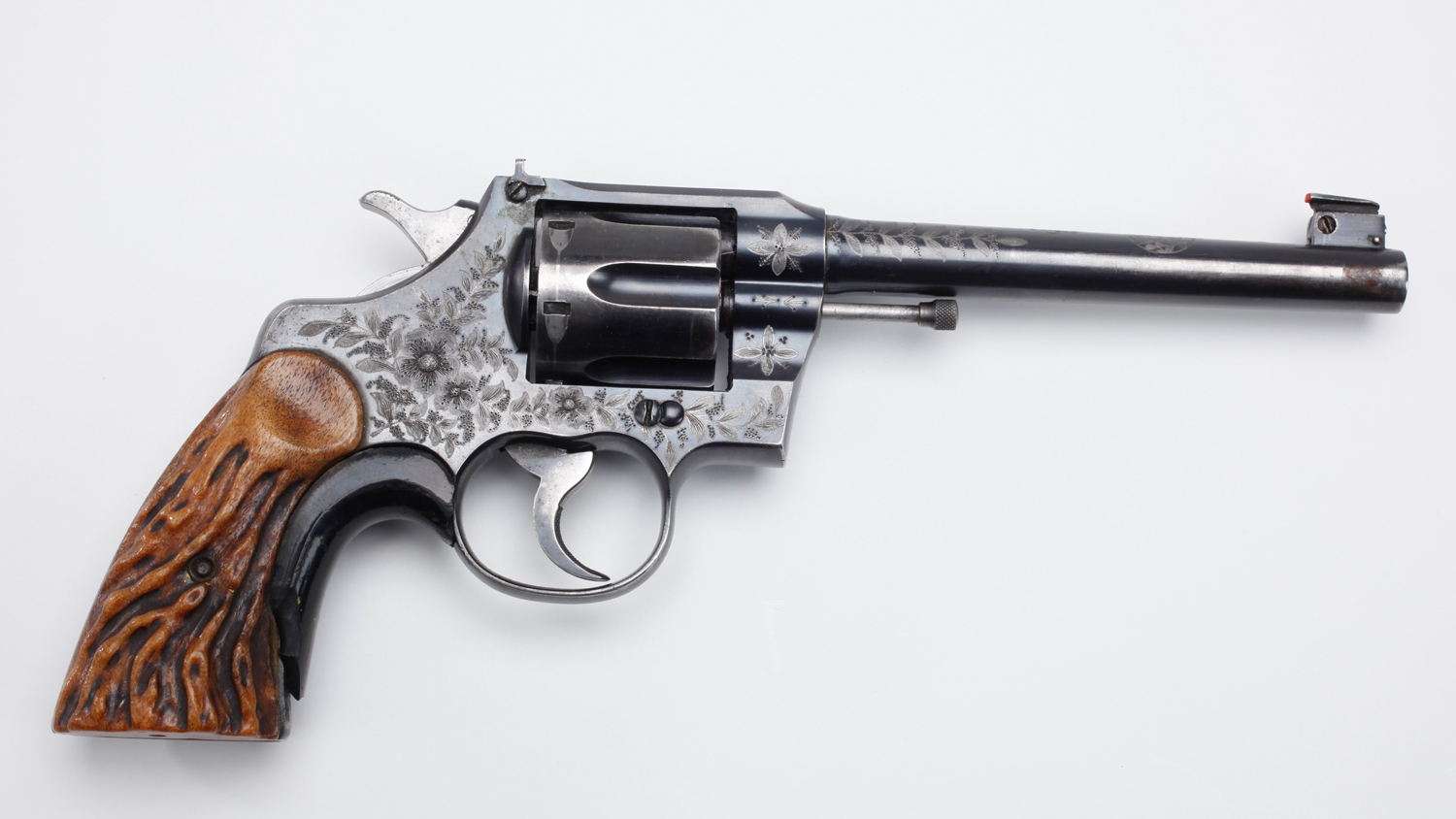 In 1889, theater manager George Walker staked Toepperwein for a ticket to New York City and some money for expenses. Ad was on his way to the capital of vaudeville. New York City was amply filled with acts – trained dogs, seals, piano players, dancers and more, but a shooting act was something new. The young Texan was launched into the circuit after shutting down Coney Island’s gallery row with his shooting demonstration – cleaning out all the prizes behind the counters. He performed in smoke-filled halls after following minstrel shows for two years. Finally, after exhausting the mix of vaudeville opportunities, the Orrin Brothers Circus then opened the door for an eight-year chance to ride the rails across the land, and offered Ad the chance to join in Mexico.

But the new century dawned and thirty-year-old Ad was given the chance to shoot for Winchester – a job that required disposing of ample supplies of Winchester ammunition - all under contract. One day while working for Winchester, Ad was required to travel to the factory in New Haven, Connecticut. It was there where he met the other half of his future – an 18-year-old redhead with the name of Elizabeth Servaty. Servaty was employed at the New Haven plant as an assembler of .22 cartridges. While this story would sound even better if they met among ammunition, in reality, the two first exchanged glances at a water foundation in a nearby park. A few short weeks later they were married. 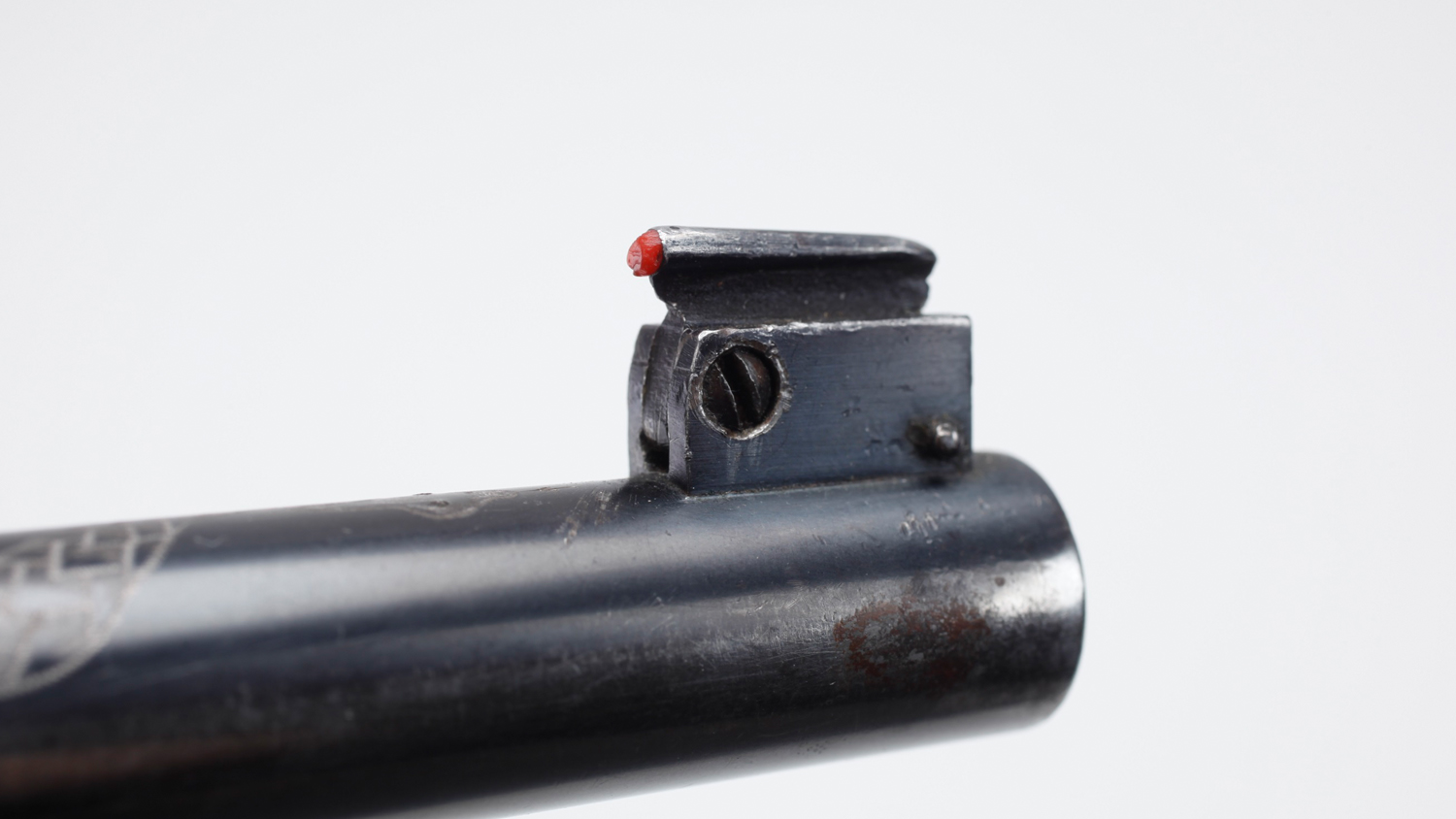 Ad and his new wife began their life together with Ad immediately utilizing Elizabeth as part of his touring act after teaching her how to shoot. He shot pieces of chalk from between her fingers and she tossed aloft various targets in the beginning. Folks at Winchester weren’t slow to capitalize on the husband and wife combination and dubbed the pair, the “Famous Topperweins”.  Ad had lost an “e” from his surname with Winchester advertising, but had gained an enthusiastic partner.

The two set-up in towns where local schools closed so that the students could attend the shooting exhibition. But being a passive participant quickly paled and Elizabeth wanted in on the action. Her term for shooting (and hitting) informal targets, like tin cans, “plinking,” inevitably lead to her new nickname – “Plinky”. The duo shot tossed coins, bottle caps, pine cones, and other targets with a variety of rifles, shotguns, and handguns, all while using Winchester ammunition. 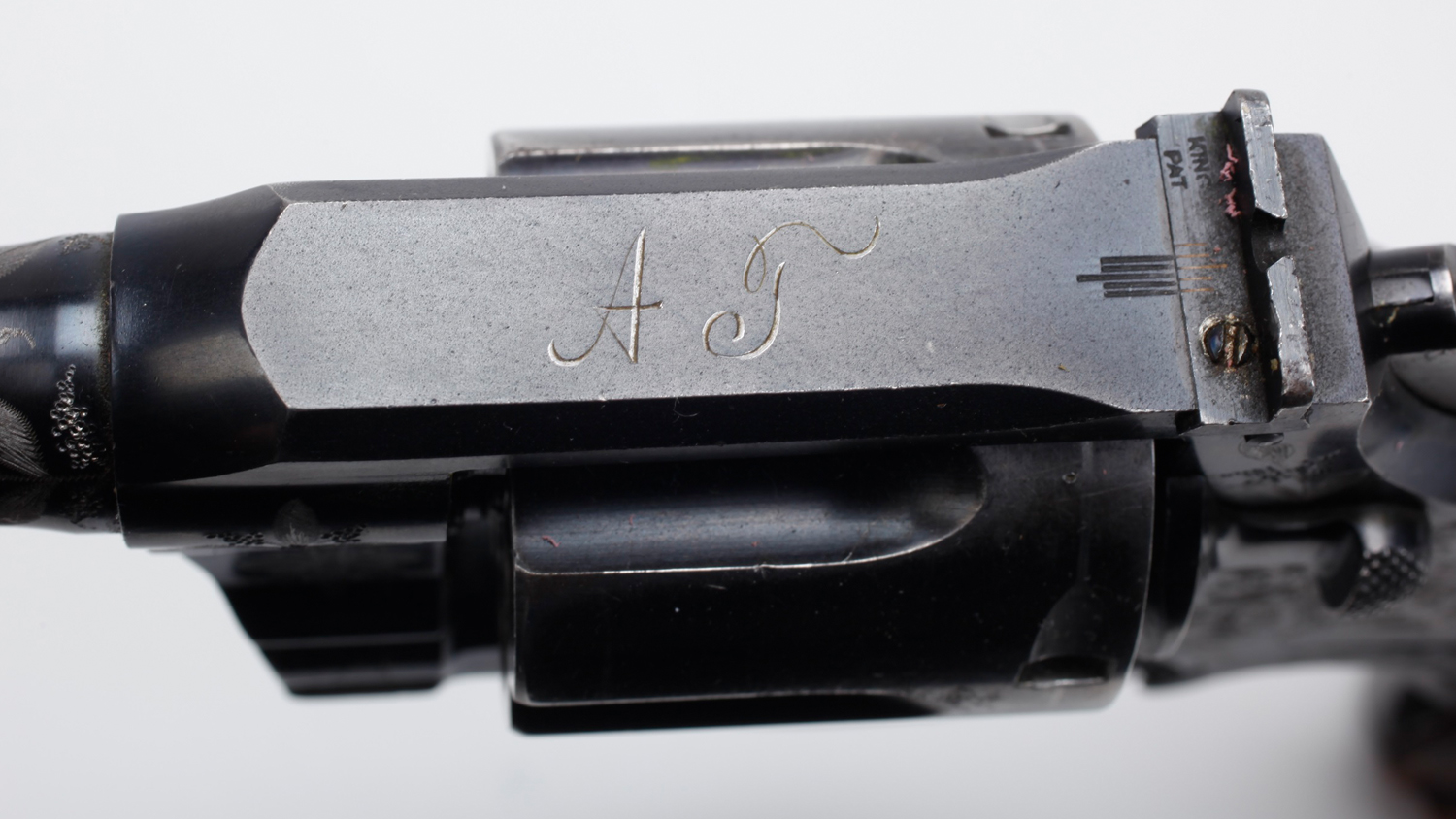 The two continued touring the country for Winchester and Plinky became the best female shooter of the day, racking up win after win in shotgun competitions. After Ad and Plinky’s son Lawrence arrived in 1904, Plinky decided to slow down with her shooting career and began taking up bowling seriously. For Ad, this was heresy and he challenged his wife to a shoot-off to see if she had lost any of her skills. Plinky was still in her best form and was reported to have beaten Ad in two of the three matches that day.

The Topperwein’s had a collection of firearms between the two of them, but one special handgun, a Colt Officers Model .38 was one Ad retained even after his beloved Plinky died in 1945. Engraved and fitted with jigged bone grips, this Colt has a long barrel fitted with adjustable sights. Atop the double-action revolver’s frame are inscribed the initials “A.T.” A long-term San Antonio resident, Don Nissen, donated this handgun to the museum collection in 1979, seventeen years after Ad Topperwein passed, noting that Ad had always wanted one of his firearms “represented in a museum up north.”

Ad Topperwein’s target Colt, ordered in 1930 from Colt, can be seen today at the NRA’s National Firearms Museum in Fairfax, Virginia in the competitive shooting gallery. This Colt is displayed next to guns owned by showman shooter Herb Parson, and teen shooting wiz Arlayne Brown. These historic handguns all hearken back to an age where Americans flocked to state fairs to see shooting exhibitions from these famous shooters.