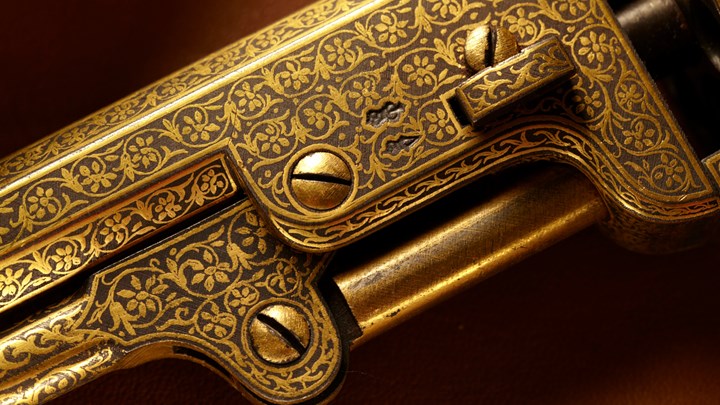 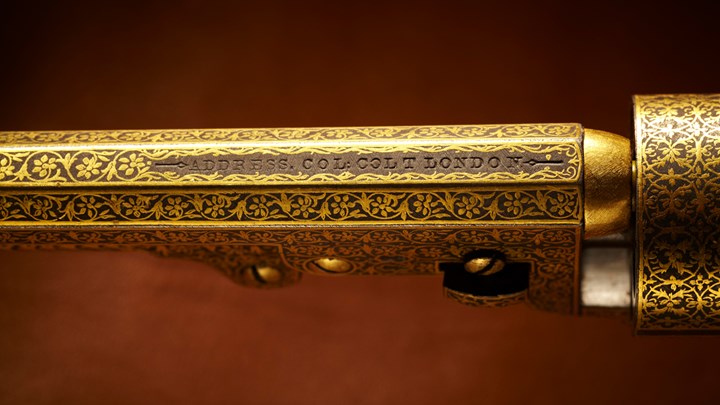 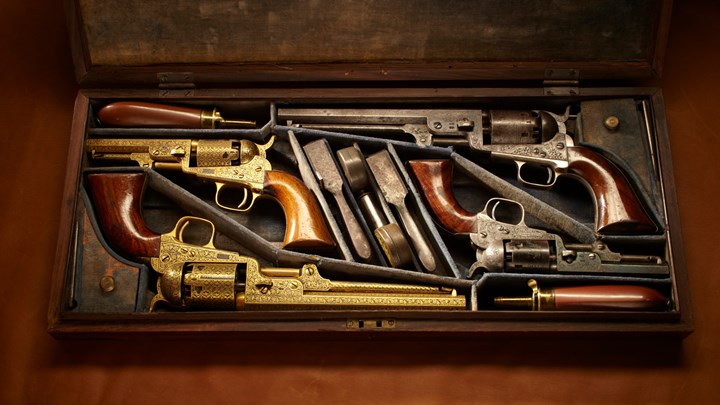 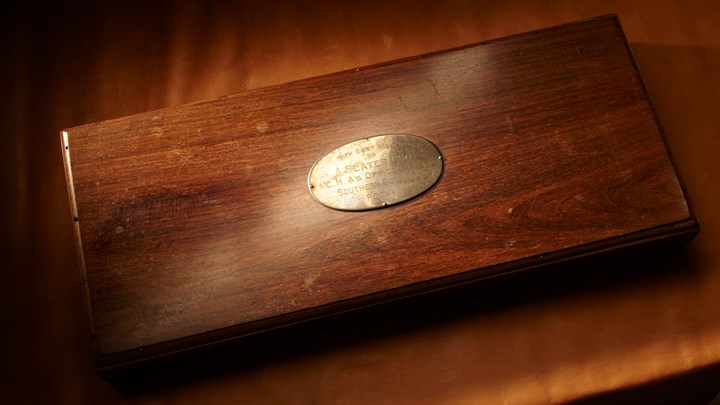 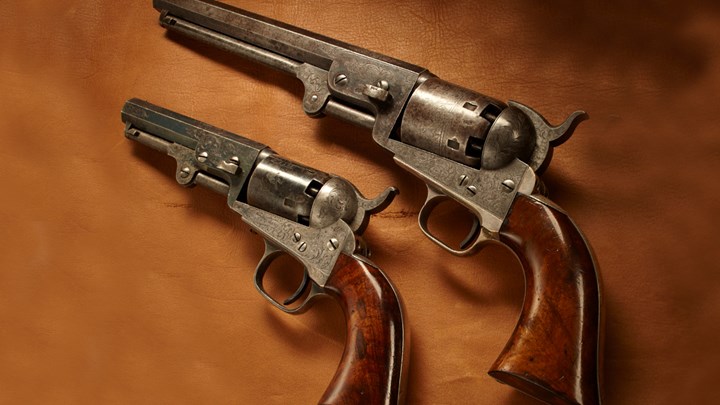 A multitude of great guns reside in the NRA National Firearms Museum galleries, but sometimes visitors are amazed by the unusual pieces on display that also bear the name of an prolific American arms maker.

While Samuel Colt is well known for presentation-cased sets of revolvers, one four-gun cased Colt set currently on exhibition offers a glimpse of engraving from two perspectives. The walnut case for this set holds two Colt Model 1849 Pocket revolvers in .31 caliber and two Colt Model 1851 Navy revolvers in .36 caliber. Two of the revolvers are embellished in full coverage golden damascene engraving, and two have the more usual floral scroll engraving pattern and the blued, casehardened finish seen on Colt handguns of this period. In addition to the four revolvers, this casing also holds the full suite of accoutrements – bullet molds, powder flasks, percussion cone wrenches and more.

Colt’s cased sets were more usually encountered as single or double-gun groupings. This four-gun assemblage is unusual, but the mixture of these two different engraving styles in one set is unique. It is unknown whether Colt performed the damascening on the pair, or if it was completed when these handguns were shipped to their ultimate destination. The floral damascene pattern in gold follows a stylistic model unlike more usually seen Spanish damascene engraving.

Thereby begins the back-story for these guns. Each of these four revolvers bore British proof marks and was manufactured at Colt’s London factory between 1853 and 1857. But the set’s case lid now bears a silver plate with a circa 1934 inscription to a British military controller in Poona, India. It is believed the original recipient of these four engraved Colts was a maharajah or other high-ranking Indian personage, when the guns were sent out from Colt during the British Colonial period.

At that time, Poona was a growing municipality on the railroad line from Bombay, operated by the Great Indian Peninsular Railway. The British Indian Army built a large military cantonment to the east of the city, which was to house elements of the Southern Command, the oldest field army on the Indian sub-continent. Period documents describe the cantonment’s ornate headquarters building as being flanked by polo fields and cricket grounds, punctuated by bungalows for married officers stationed there, and even an expansive shooting range.

The circumstances under which this cased set of four engraved made their way to Mr. Slater, who became the head military accountant in India, is not known. But with potentially eight decades of intervening time between the “formal” presentations, this cased quadruple gun set could have changed hands several times. Despite their age, these four embellished percussion Colt revolvers show little evidence of ever having been fired.

Interested in taking an up-close look at these incredible, if not mildly mysterious, Colt revolvers? To see these and thousands of other historic, unique and amazing firearms, artifacts and more, visit the NRA National Firearms Museum in person or online!