The Secret Weapon That Never Really Was – The Pedersen Device 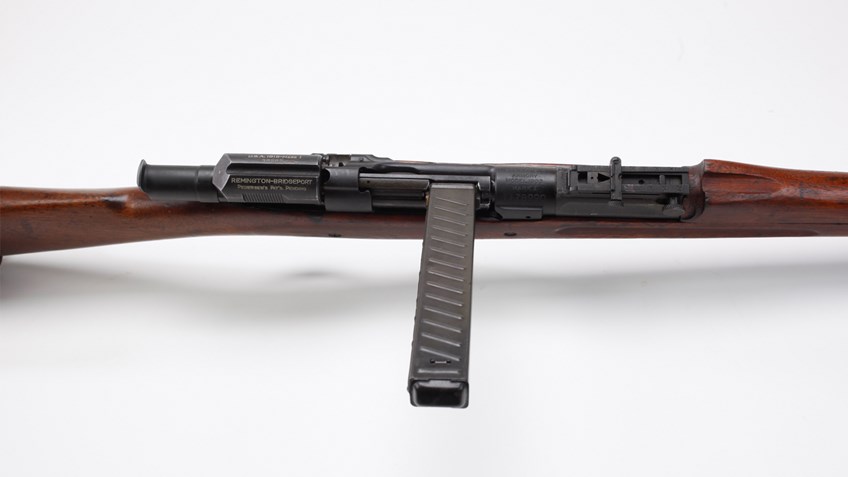 There were secret weapons and then there was the Pedersen Device, an unlikely adoption of the Model 1903 rifle by arms designer John D. Pedersen. But the “top secret” designation for this device was because of the misguided belief that it could become a war-changing miniature machine gun – not an unimportant consideration in The War To End All Wars.

But it all started off so well…

It was 1917 at the U.S. War Department in Washington, D.C., and standing on the doorstep was inventor and arms designer John Pedersen. His reputation meant that no appointment with the Chief of Ordnance was necessary, which was a good thing because Pedersen had brought along his invention, something so potentially significant to the war effort that he felt that only a handful of officials could be allowed to view. This item, in a low-key demonstration, he was prepared to give immediately. 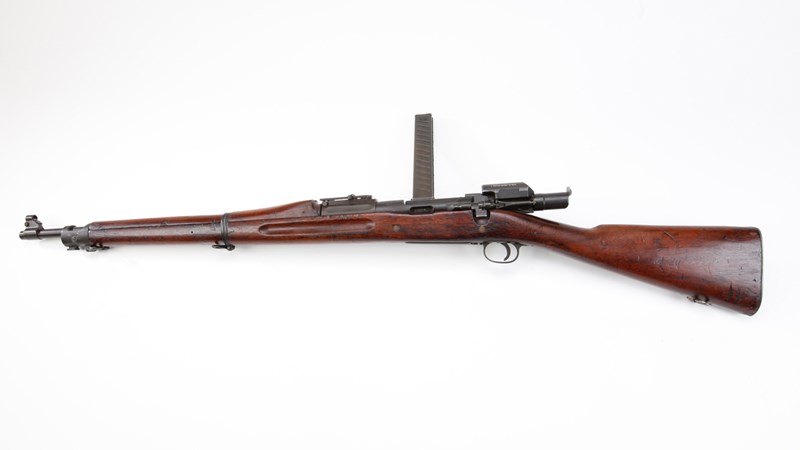 One can easily imagine the convoy of automobiles that drove just to the District limits where the now-defunct Congress Heights Rifle Range was located. The range was deserted on that summer day and the weather was typical for Washington – hot and humid. But Pedersen stood on the firing line and uncased a U.S. Model 1903 rifle, the standard bolt-action in .30-’06 Springfield that every Doughboy knew how to assemble and disassemble. He fired a series of shots with no issue. But then he pulled the bolt from the action and tossed it onto the bench. From a case he produced a cylindrical mechanism that fitted into the receiver easily. Then a long box magazine was produced and fitted to the side of the mechanism. The ammunition used with the Pedersen Device was a short .30 caliber rimless pistol-sized cartridge, resembling the .32 ACP in size, but slightly more powerful. 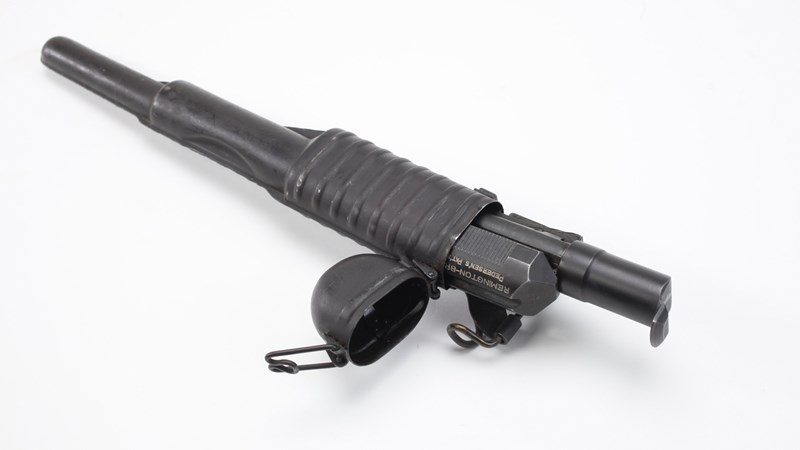 John Pedersen began firing rapidly, far more quickly that he had just minutes before with the standard bolt-action. For each pull of the trigger, a shot rang out and the shooting went on and on. While the usual M1903 firing sequence involved loading with a clip of five cartridges, the Pedersen device’s magazine held forty cartridges. As fast as he could pull the trigger, the rifle fired semi-automatically. To the onlookers, it was a moment they could hardly believe. The standard bolt-action rifle of America’s army changed in an instant to a quick-shooting arm with amazing firepower. To the Army, the implication was immediately understood. The rifle that each of their soldier carried into battle could be immediately upgraded to a rapid-firer – this offered impressive advantages on the battlefield. 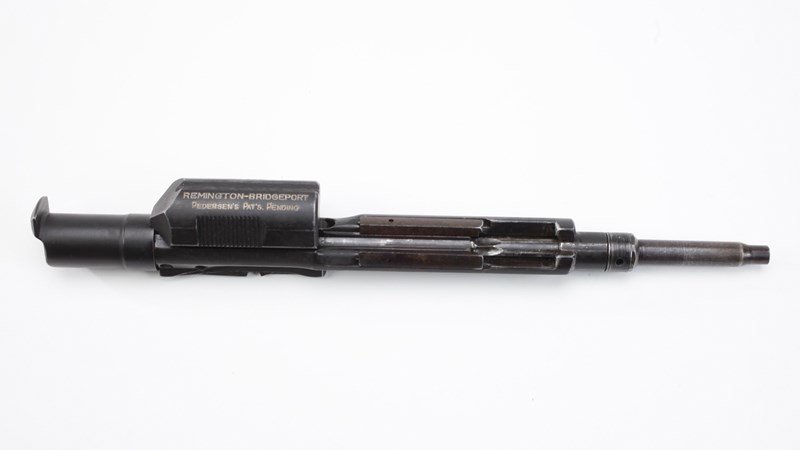 Off to Europe went another of the Pedersen Device prototypes for review in France. The military committee there were equally amazed and because this conversion fired a smaller .30 caliber cartridge – the conclusion was made that the average soldier could easily carry 400 rounds of ammunition for the Pedersen Device. It was felt that the greatest advantage for this new arms system lay in its surprise deployment. General Pershing noted that this weapon offered a “barrage effect” that could overwhelm enemy positions during an assault. Opposing soldiers expecting the normal cadence of bolt-actions would be devastated by the onslaught of an attacking force armed with semi-automatics firing and firing.

Back in America – immediate orders were placed. The Pedersen Device and its unique ammunition, a metal carrying scabbard for the Device, web pouches for spare magazines, a pouch to carry the regular rifle bolt - all were needed. But the awkward fact that the Pedersen Device could not be used with existing M1903 rifles immediately surfaced. A special modified rifle, one with a port on the off side of the receiver to allow ejected cases to come out, also needed to be manufactured. The Model 1903, Mark I was the gun’s designation and production started at Springfield Armory with very little fanfare as to the presence of the new aperture on the receiver. The Device itself was to be manufactured under the designation of Automatic Pistol, Model of 1918 for secrecy. 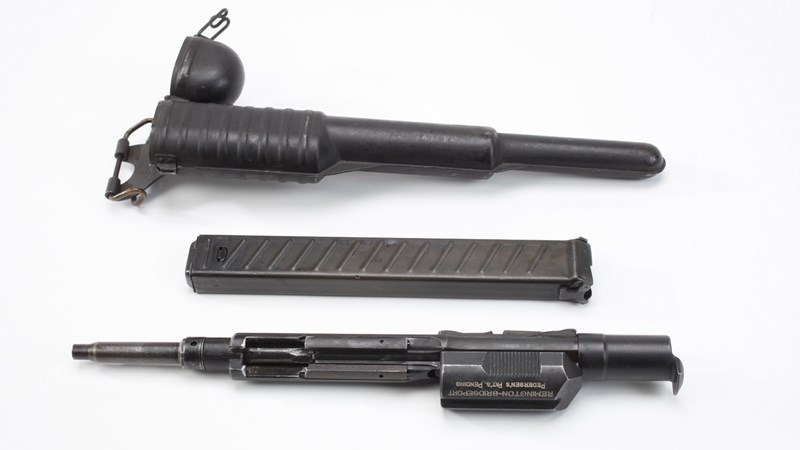 Just under 145,000 Mark I rifles were produced, but only about 65,000 Pedersen Devices were built. The plan was for the first use to take place during the Spring Offensive of 1919, but World War I came to a conclusion with the signing of the Armistice in November of 1918. Suddenly – after The War to End All Wars was done - all those secret weapons were not needed. The government decided that outright destruction was the answer. It has been estimated that less than 25 Pedersen Devices survive today.

There are currently two Pederson Devices on exhibition with NRA Museums. One is located at the National Firearms Museum in Fairfax, Virginia, which showcases General Julian Hatcher’s example in its WWI gallery. The second is housed at the NRA National Sporting Arms Museum at Bass Pro Shops in Springfield, Missouri where the original Pederson Device is displayed in the Remington factory collection.