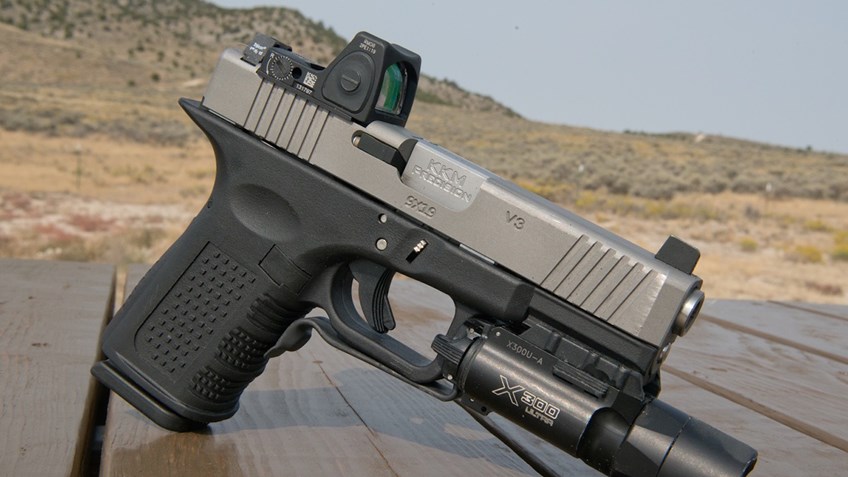 More
SUBSCRIBE
When you imagine purchasing a reflex, or red dot, sight, the first application most shooters imagine is mounting it to a rifle. The rise in popularity of the AR-15 spawned an entire generation of precision optics to update the trusty yet antiquated iron sight set up, and with their flexibility and ease of use, red dot sight have become a must-have accessory for rifle owners.

Technology, however, tends to follow a trend of fitting better features into smaller packages. Remember the dawn of cell phones in the 1980’s? Compare that to a modern smart phone (even if the current demand for theater-in-your-pocket screens is leading to a surface-area boom in phone sizes). Computers of the 1950s filled an entire room, whereas today’s capabilities fit exponentially more process power in the palm of your hand.

Red dot sights are no different, and the ability to pack powerful tech into tiny packages has allowed manufacturers to produce smaller sights. As a result, the same technology you’ve used on your rifles is available for your pistols, as well. 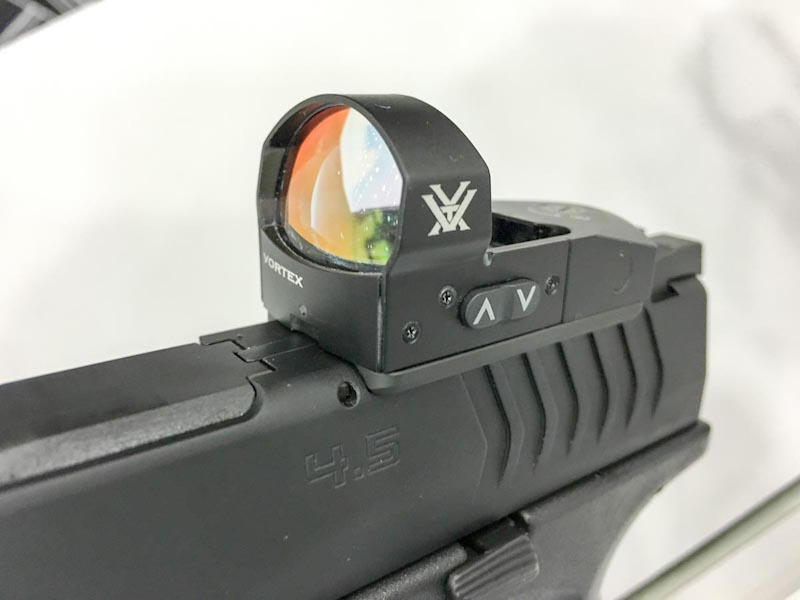 Red dots for pistols emerged initially in the hunting market before being adopted by competitive shooters. Now increasingly popular amongst tactical and defensive-minded shooters, the demand for pistol red dots is flourishing. Pistol reflex sights are small and lightweight enough to ride on your gun without adding too much weight or bulk, and must be sturdy enough to withstand recoil.

Andy Lander, NRA Training Counselor Program Coordinator, said shifts in technology leads to shifts in training ideologies, as well. Red dots give the user the ability to focus on the target rather worry about sight alignment, which typically produces faster hits on target.

“When time is life, a tenth of a second may be the difference between life and death. What if my battery dies or sight breaks? Many of these systems co-witness with the iron sights, giving those who are concerned a backup,” he explained. “A more realistic defensive engagement will likely occur up close, and since defensive training incorporates things like gross sight misalignment at relatively close ranges, using the sight frame itself as frame index or reference may be sufficient for defensive purposes at up close ranges.”

Perhaps most importantly, red dot sights are easy on the eyes. Over a long enough time period, every shooter’s vision weakens to some degree, and they’ll have to adapt in order to remain accurate and safe. Lander said reflex sights are reliable and easy to use, and provide much easier target acquisition for those with diminished vision.

While numerous manufacturers are bringing pistol red dot sights to the market, we’ve picked out five popular systems to provide an introduction: 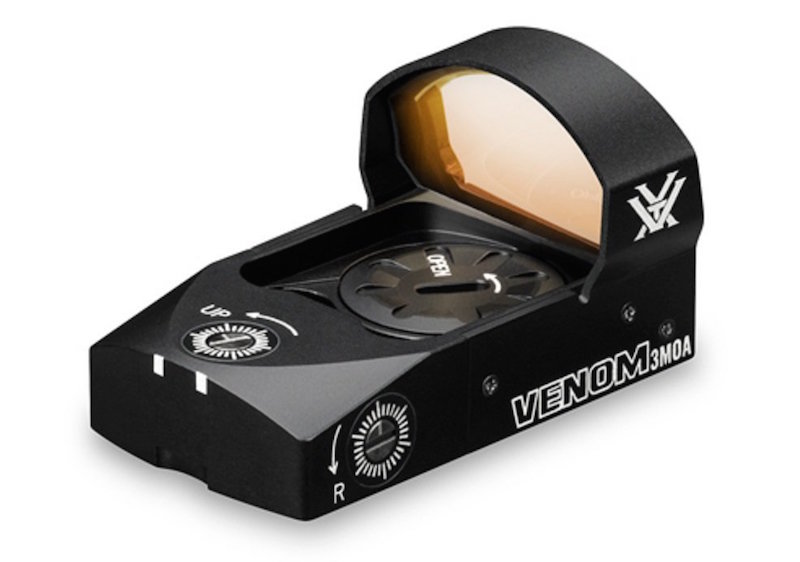 Vortex Venom
Vortex’s Venom reflex sight can be mounted on pistols with Picatinny rails, as well as tactical rifles and shotguns. The 3 MOA dot is easy to see in nearly any lighting conditions and allows users to shooting accurately at long ranges. Ultra-clear multi-coated lenses provide a wide field of view with sharp image quality, and brightness controls are easy to find and use, located on the left side of the unit. The Venom features 14-hour auto-shutdown to extend battery life, and the unit is built shockproof and waterproof to withstand harsh operational demands. 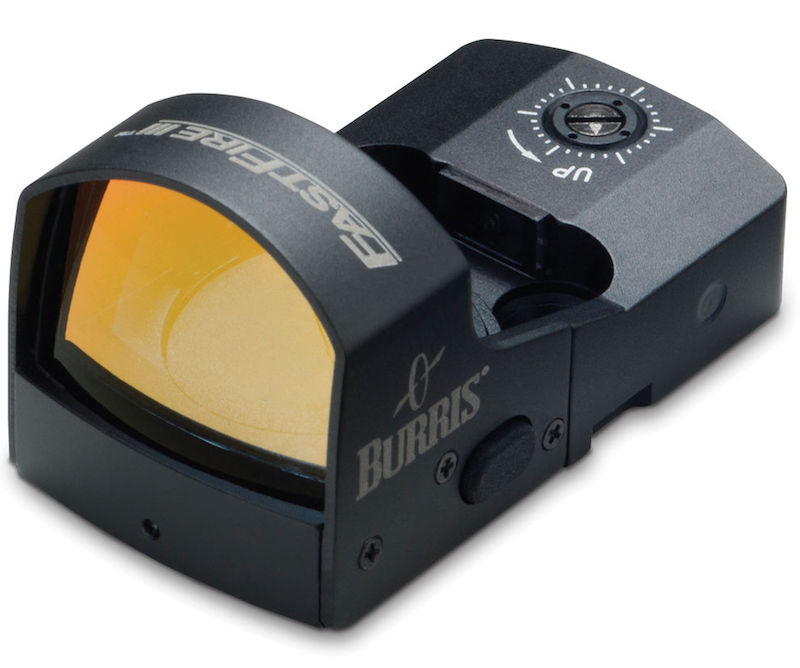 Burris Fastfire III
Burris’ Fastfire III is one of the most versatile red dots on the market. In addition to the unlimited eye relief awarded by red dots, the Fastfire III features windage and elevation adjustments that don’t require the use of a proprietary or special tool – just a small flathead screwdriver is needed to make adjustments, and comes bundled. Battery access on the top of the sight makes it easier to change batteries, and the Fastfire III includes a battery warning indicator and eight-hour auto-shutoff to prolong battery service life. 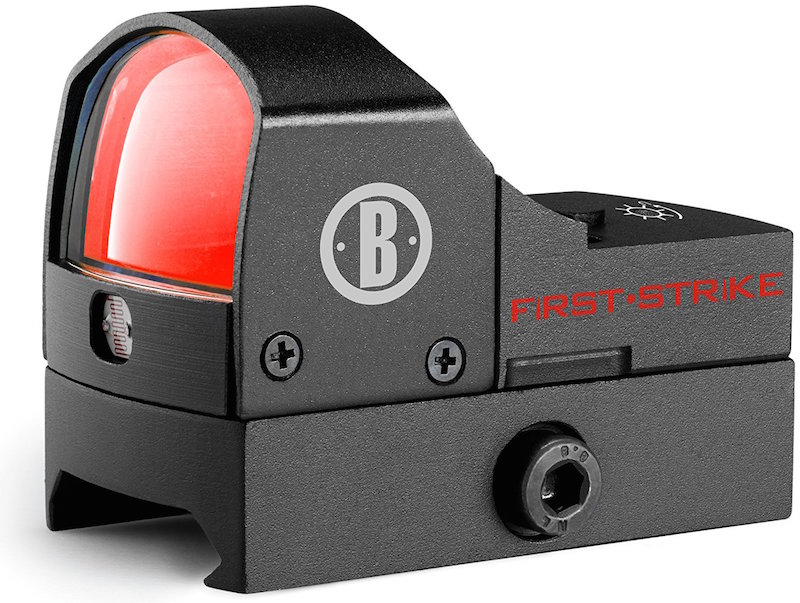 Bushnell First Strike
Known for quality sights at great prices, Bushnell delivers again with the First Strike, one of the most affordable red dot sights available. Despite it’s affordability, the First Strike is well made, and an ideal candidate for use with smaller-caliber firearms, such as rimfire pistols. Like many other reflex sights, the First Strike mounts using the Picatinny rail system, so you’ll need to ensure your pistol either has a rail included or can facilitate a small mounting rail section. The First Strike is waterproof, shockproof and fogproof, and coated lenses ensure excellent light transmission, allowing easy target acquisition up to 100 yards – well beyond normal pistol range. 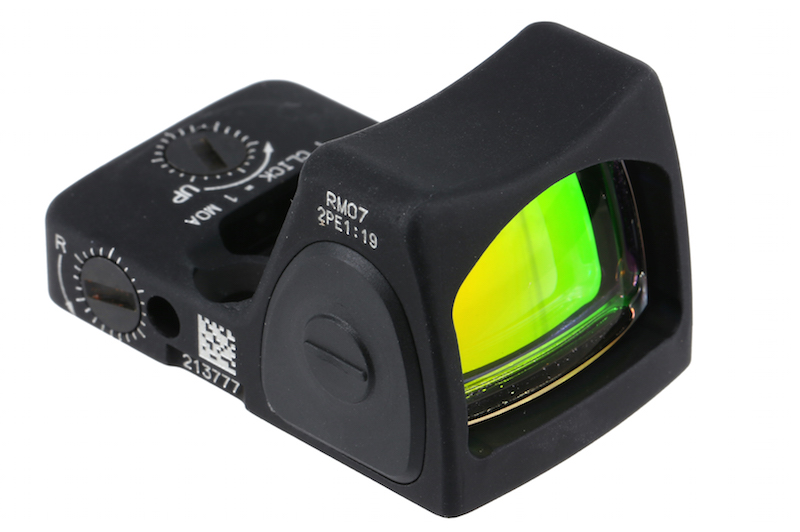 Trijicon RMR
Trijicon’s RMR – Ruggedized Miniature Reflex – sight is one of the most durable mini red dots available today. Produced from 7075-T6 aluminum to military specifications, the RMR is lightweight but strong, using a patented shape that absorbs impact and diverts stress away from the lens. The RMR is available in dual-illuminated, LED, and adjustable LED models with dot sizes from 1 to 13 MOA. The RMR is waterproof to 20 meters (or 66 feet), and boasts easy adjustment for windage and elevation. 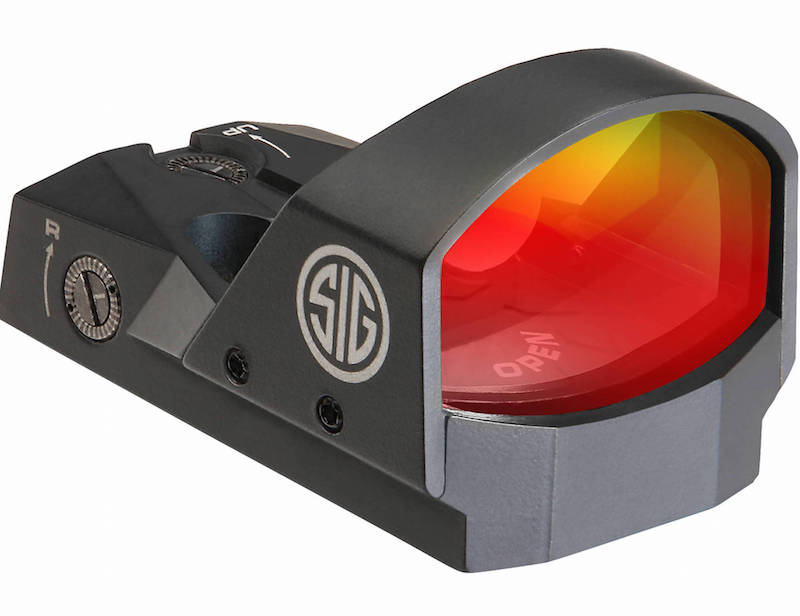 SIG SAUER Romeo 1
SIG SAUER’s Romeo 1 open reflex sight is built with SIG’s twin adjustment springs that provide a “lock-less” zeroing system while maintaining zero. The sight body is CNC-machined from solid billet magnesium to be lightweight and strong, and its molded aspherical lens is bright and distortion-free. The Motion Activated Illumination (MOTAC) system recalls the last brightness setting used, so you don’t have to remember those adjustments on your own.