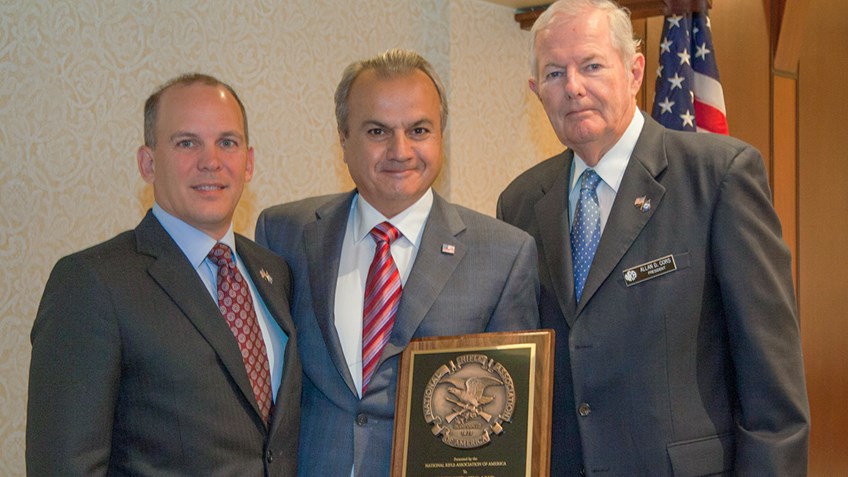 At the NRA Board of Directors meeting held May 1 in Atlanta, Georgia, the National Rifle Association presented the President’s Special Recognition Award to Anthony Imperato, President of Henry Repeating Arms, for his distinguished philanthropic leadership and contributions to the NRA.

This special presentation, which followed the 146th NRA Annual Meetings and Exhibits, credited Imperato specifically for the acclaimed Henry 1,000 Man Shoot Presented By NRA, held Nov. 14, 2016 in Phoenix.
Henry Repeating Arms’ generosity and desire to preserve our sacred Second Amendment is exemplary.
In the spirit of freedom and solidarity following a historic Presidential election, Henry Repeating Arms partnered with NRA in pursuit of a world record. This historic and unique event gathered 1,000 freedom-loving Americans to simultaneously fire 1,000 Henry Repeating Arms rifles on the firing line.

Imperato also donated each Golden Boy Silver rifle used for the event, which raised more than $600,000 for the NRA.

“There are many individuals and groups that provide the financial resources to help the NRA advance its mission,” said Pete Brownell, who was elected President of the NRA later that afternoon. “Henry Repeating Arms’ generosity and desire to preserve our sacred Second Amendment is exemplary.”

Henry Repeating Arms has proudly supported the NRA for more than two decades, including a profound investment with the Friends of NRA program, NRA’s Institute for Legislative Action, NRA Publications, and TV programs including NRA All Access and NRA Gun Gurus. In total, Henry’s support to NRA exceeds $2.7 million in combined cash, gift-in-kind, and sponsorship contributions.
I’d like to thank the Board and all of the folks of the NRA for their tireless efforts to preserve our sacred Second Amendment.

“It’s my honor to accept this award on behalf of Henry Repeating Arms. I’d like to thank the Board and all of the folks of the NRA for their tireless efforts to preserve our sacred Second Amendment,” said Imperato. “I accept this in memory of my grandfather who got started in the gun business in the police equipment business 100 years ago, and in memory of my father, who was a staunch supporter of the Second Amendment and promoter of youth shooting sports.”

Henry Repeating Arms continues to be an exemplary model in the industry in defending Second Amendment rights and upholding traditions of hunting and shooting sports, and we congratulate Anthony Imperato for receiving this deserving award.

Click here for more details from the Henry 1000 Man Shoot Presented by NRA!