Friday Feast: Four Ways To Cook Game And Fish Over A Flame 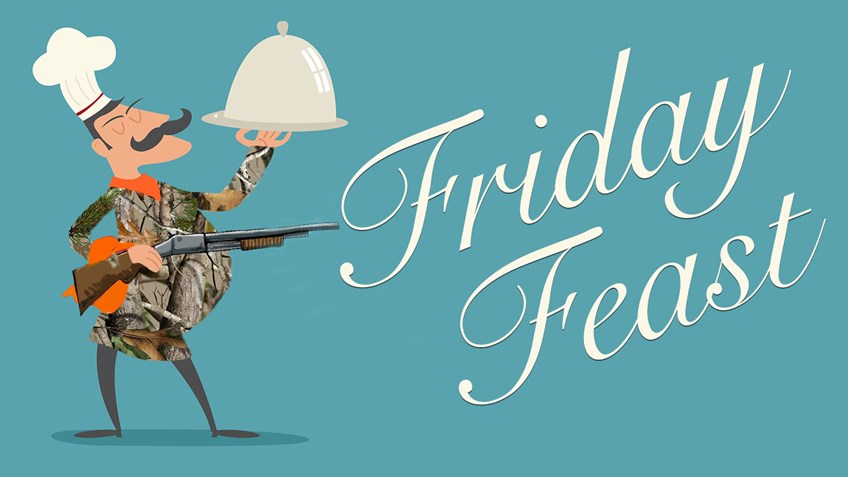 Ask any sportsman, and you’ll likely hear something along the lines of “there’s no place I’d rather be than in the outdoors.” It’s true – Mother Nature envelopes hunters and anglers in the natural beauty and bounty than appeals to our innermost instincts, and a bad day in the outdoors usually beats a good day anywhere else.

There are few feelings more satisfying than bringing home a harvest and preparing a delicious meal, having put in the work and experienced the natural order of life to put food on the table. Having the culinary tools and creature comforts around you in your kitchen can make cooking a breeze – but what about when you want to use the power of fire alone to cook? Therein lies another survival instinct, a mechanism we often fail to exercise due to our reliance on technology and thirst for convenience.

You’re not always going to have access to that expensive non-stick cookware or designer knife block – and that’s perfectly fine, because nature provides just about everything we need. Field and Stream’s T. Edward Nickens breaks down four ways outdoorsmen can prepare their catch over an open flame, using as few implements as possible. 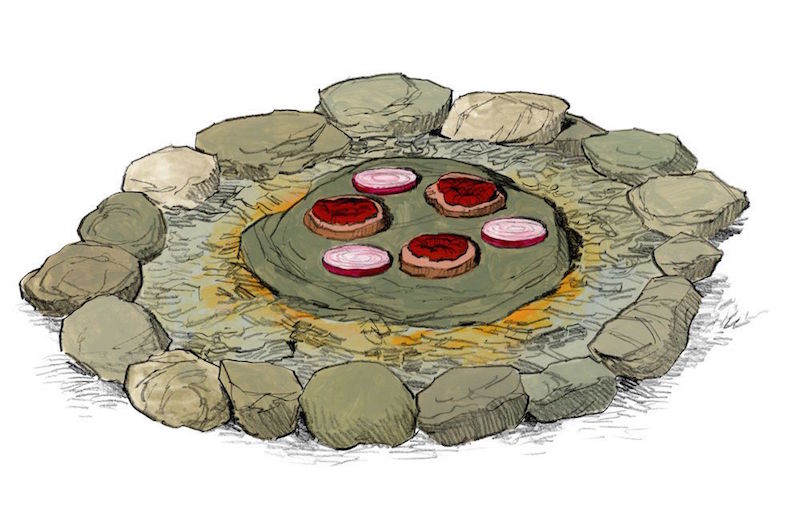 1) Venison Steaks on a Rock

Build a hot fire to produce a deep bed of coals. While the wood is cooking, find a flat rock that’s less than 2 inches thick. Avoid delicate shales and sandstones, and stay away from stream rocks, as saturated rocks can explode in a fire. Wash the rock surface and place it at the edge of the coals for 15 minutes to preheat -- heating it gradually will lessen the chances of it cracking and splitting. Move the rock to a shallow nest scooped into the coals.

Once the rock is hot enough that a drop of water sizzles and vaporizes, brush on a film of olive oil, then add backstrap medallions and 1⁄4-inch-thick slices of onion. Season with cracked black pepper. Cook the venison and onions for 2 to 3 minutes. Remove the food, turn the rock over, brush away the ashes, and drizzle with more flavored olive oil. Place the medallions and onions on the fresh, hot surface, cooked side up, and top each medallion with an oil-packed sun-dried tomato. Cook another 2 minutes. Stack an onion slice on the meat and sun-dried tomato. 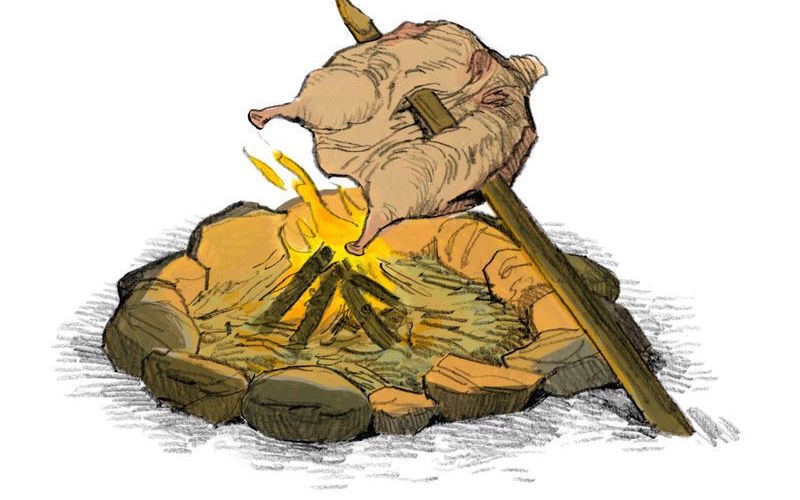 Butterfly the duck through the breast by inserting a stout knife along one side of the breastbone keel, cutting all the way to the backbone. Loosen up the bones and flesh by working the duck back and forth between your hands. Place the duck on a flat surface and press with the palm of your hand. Skewer the duck by running the stick in and out of the breast meat on one side of the keel, and then on the other.

Anchor the stick in the ground at a 45-degree angle to the fire, 6 inches to a foot away from the heat source. Cook the breast side to the fire first and rotate once. Cooking should take about 20 minutes. 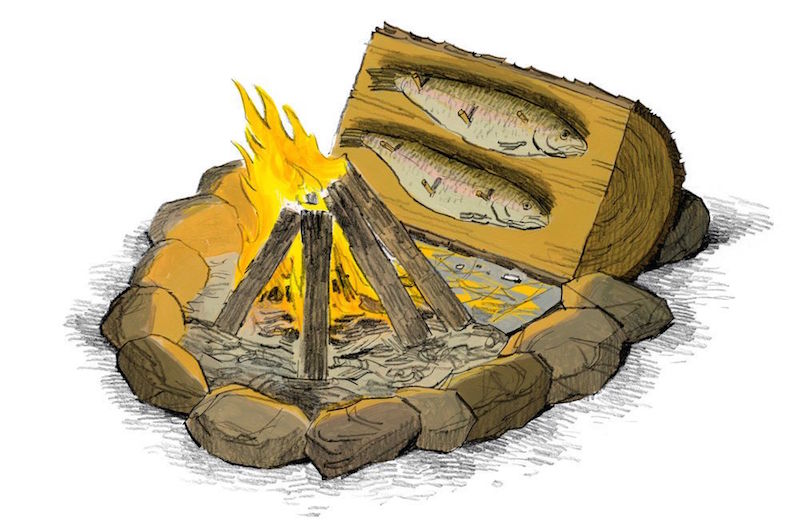 Freshly caught local trout and panfish are small and thin enough to cook quickly, white enough to soak in the flavors of smoke, and fatty enough to stay moist in the heat of an open flame. Best of all you don’t even need a carefully squared plank of wood.

Start by splitting an 18- to 24-inch-long, 8- to 12-​inch-diameter log in half. Nickens says that cedar is a good wood choice, bur to avoid pine because its resin is too pungent. Whittle about 12 2-inch wooden pegs, sharpening one end. Lightly oil the flat surface of the log round and lay out the whole fish, scaled and gutted, or the fillets skin-side down. With the point of a knife, poke through the fish to mark the log where the pegs should be. Remove the fish, then drill or bore starter holes for the pegs. Replace the fish and tap the pegs into place.

Season your fish with salt, pepper, and butter (if you have it handy!), or a spice rub. You can also insert ginger slivers and sprinkle with teriyaki sauce if you like. Build a tepee fire so the flames will rise at least to the level of the fish. Position the log round beside the fire, using rocks for support. Roll out a strip of aluminum foil in front of the log to reflect heat and aid cooking, which should last about 15 minutes.

Start by stirring together a dozen fresh figs, a teaspoon of dried thyme, and 2 tablespoons of olive oil. Stuff the body cavity with the fig-and-herb mixture, then tie it up with three to four wraps of kitchen twine. Wrap the rabbit in bacon and truss it with more twine. To do this, tie a loop around one end of the rabbit with a simple double knot. Stretch 1 1⁄2 inches of twine along the body, hold it in place with your thumb, wrap the twine around the rabbit, pass it under the first loop, and continue. At the end of the rabbit, pass the twine behind the backstrap, threading it under the wraps. Tie off to the first.

Next, run the skewer through the rear cavity along the inside of the backbone and out through the neck. Make a rotisserie of forked sticks on opposite sides of a fire or a stack of hot briquettes, and place the skewer in the forks. Roast the rabbit about 10 minutes, rotate 180 degrees, then lock the skewer in place with shoelace bows of kitchen twine tied tightly around the forked sticks. Cook for another 10 minutes. Rotate 90 degrees and cook for 7 to 8 minutes, then rotate 180 degrees and cook for another 7 to 8 minutes. The rabbit is ready when the internal temperature of the fat part of the hind leg reaches 160 degrees.