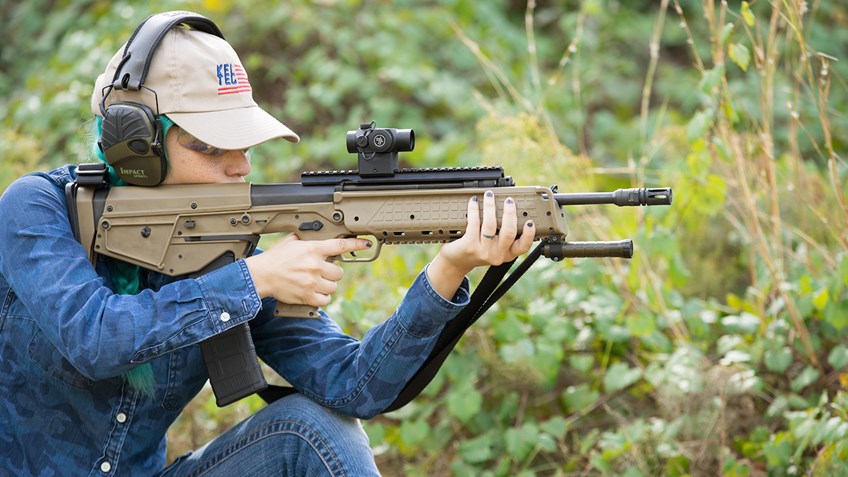 Most rifles follow a general order of construction, whether manually cycled or semi-automatic, with the trigger located beneath or behind the action and magazine. Picture a Remington 700 or a AR-15, and where the magazine sits in front of the trigger guard. This is the most familiar configuration for a long gun, but depending on the application, can result in particularly LONG guns.

Enter bullpups, a design that flips that configuration around. Bullpup guns place the action and magazine behind the trigger assembly and closer to the shooter’s body. Since the chamber is further to the rear, the barrel is moved backwards, as well, and could eliminate the need for longer buttstocks. This results in potentially shorter, more maneuverable rifles with the same barrel length as their conventional cousins. 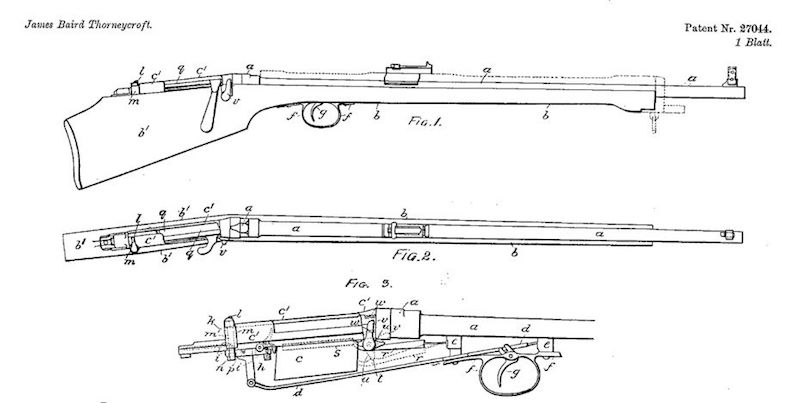 While the exact origins of the bullpup rifle aren’t clear, many firearms historians point to James Baird Thorneycroft’s 1901 carbine as the first bullpup design in history. Awarded patent number 14,622, Thorneycroft designed a .303 British caliber bolt-action rifle wherein a retracted bolt moved backward into the stock almost to the shooter’s shoulder. Pushing the bolt so far rearward took advantage of extra space available in the body of the rifle, allowing the gun to be shortened. Thorneycroft was inspired to design the carbine, which fed from a five-round box magazine, upon seeing British cavalry soldiers struggling to use traditional rifles form horseback during the Second Boer War of 1899 to 1902.

Throughout the coming century, several bullpup designs would be developed by gunmakers across the world, including the experimental EM-2 “Janson Rifle” of the NATO rifle trials in the 1950s, the Steyr AUG, the French FAMAS, the FN P90, Barrett’s XM500 in .50 BMG, the Kel-Tec RFB and RDB, and the IWI Tavor, representing a small fraction of the bullpup rifles available today. 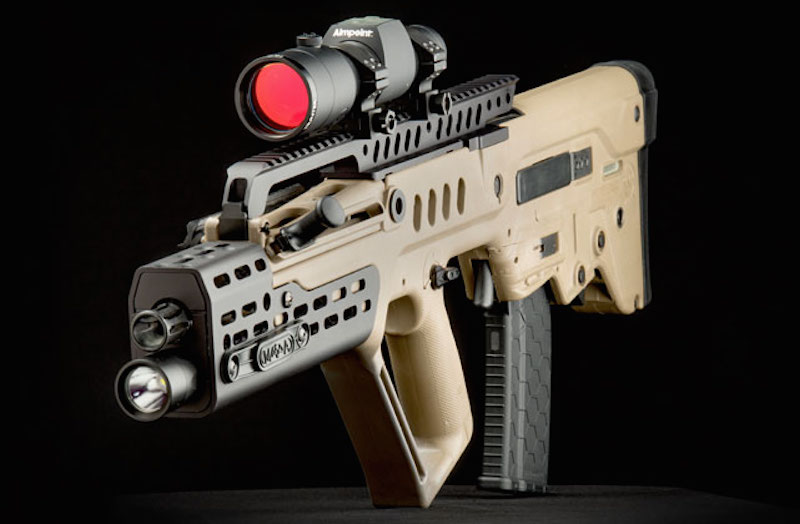 These bullpup guns have futuristic, compact aesthetics, and can definitely shave inches and ounces from a rifle, but are they right for you and your shooting needs? How does it stack up against a standard rifle in terms of performance? We look objectively at the comparison and list some pros and cons, thanks to our friends at 1800GunsAndAmmo.com.

Size and Length
Standard rifle: With the trigger positioned all the way back at the end of the firing mechanism, the design necessitates a stock in order to for the shooter to comfortably hold and aim the rifle.

Bullpup: With the trigger moved in front of the magazine, the shooter’s shoulder can now absorb the recoil of the action directly without compromising ergonomics of the system. On average, bullpups are 25 percent shorter when built on the same platform. 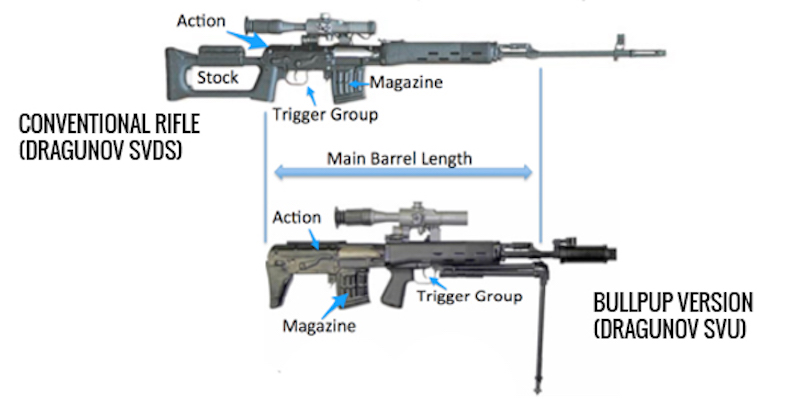 Weight and Balance
Standard rifle: Rifles tend to be heavier than the same platform bullpups, and this affects the shooter’s ability to hold the firearm in the shooting position for a prolonged period of time. With a loaded magazine, rifles like the AR-15 tend to be "forward heavy," which may affect shooter’s ability to engage the target, especially if wounded.

Bullpups: Bullpups sometimes are cited with the disadvantage of being "back heavy" with all the weight of the action and magazine being at the rear of the platform. This may result in "muzzle rise" in fully automatic mode (where applicable.) However, this disadvantage is often overstated due to the fact that the weight rests close to the shooter’s upper body with forces acting against the shoulder, and therefore is easily supported and balanced.

Accuracy
If both platforms have the same barrel length, the accuracy should be very similar. However, shooters used to the ergonomics of one platform may need to adjust their mechanics when moving between the two, and could take some time to get used to the new setup. As with all marksmanship, practice and training is the key to improving accuracy.

Bullpup rifles typically have a higher sight offset, or "height over bore." For example, the IWI Tavor's sights are almost 4 inches over the bore, compared to the AR-15, which is as low as 2.5 inches. This may not be a factor for long-range shooters, but when considering a close-quarters tactical rifle for law enforcement or home defense purposes, users may find themselves needing to compensate for that drastic height over bore for close-up shots. Additionally, shooting from a structure or through a portal such as a window will require more care using a bullpup firearm as the muzzle must be clear of the structure to ensure clear shot placement. Just because you can see the target doesn’t mean your bullet is going to strike it. 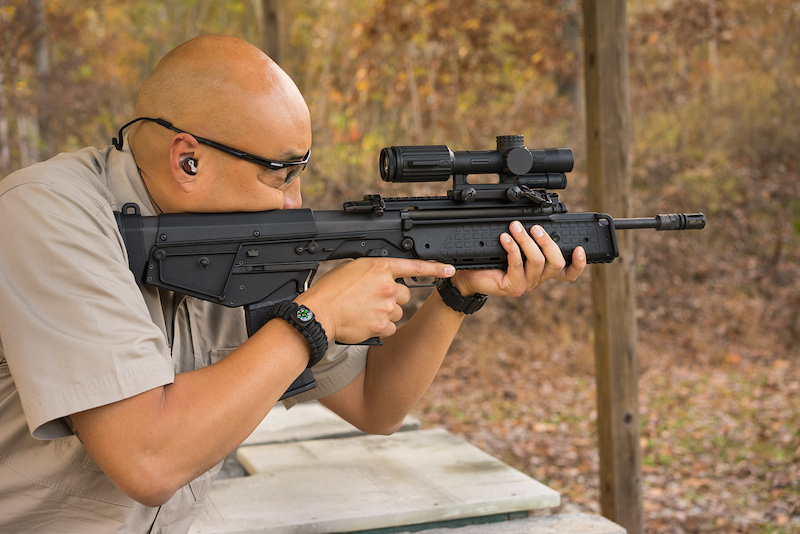 Cartridge Ejection
Standard rifle: Most conventional rifles have an ejection port located on either the right or left of the firearm. Because of the position of the port relative to the shooter’s face, a left handed shooter can still use a rifle with a right handed ejection port without fear of being hit in the face by the spent brass. Some rifles provide shooters with the ability to switch ejection ports to match their preferred shooting position.

Bullpup: Ejection ports have been the biggest disadvantage of the bullpup systems. Because the action is so close to the shooter’s face, switching from right to left or from vice-versa in the course may be difficult due to the fact that the spent cartridges would be ejecting right into the upper body and face of the shooter. Some bullpups solved this issue by ejecting casings downwards, like the P90, or even forward, such as the FN 2000 or RFB.

Trigger Pull
Standard rifle: Conventional rifles have perfected trigger mechanisms over the years. By being located immediately next to the action, there are few problems that occur with the triggers.

Bullpup: Bullpups utilize trigger linkages between the forward trigger mechanism and the action in the back of the rifle. Like anything mechanical, extra parts are exposed to additional stresses and are sometimes cited as weaknesses of the platform.

All things considered, the best way to find out what platform works best for you is to invest time at the range with a rifle, as hands-on, practical experience is truly irreplaceable. If you can’t afford to splurge at the drop of a hat and purchase a firearm to test it out, find a range that offers rental guns, or consult friends or colleagues in gun clubs and shooting circles that may be allow you to try theirs. There may be no such thing as the “perfect” rifle, but based on what you want to do with it and what your preferences are, the one way to find out is to get out and start shooting.